We moved into our first house the week of Labor Day, but it is slow doing much to the place when you are so pregnant or with a newborn.

Every. Single. Wall. And ceiling in our house is textured to feel like sand. Why anyone would want their home feeling like sandpaper I don't know, but to each their own. That said though, I'm not about to paint anything without trying to sand first, so no painting has commenced.

While it was very helpful that the previous owners left almost all the window blinds and treatments, I hated the one in Brigid's room. 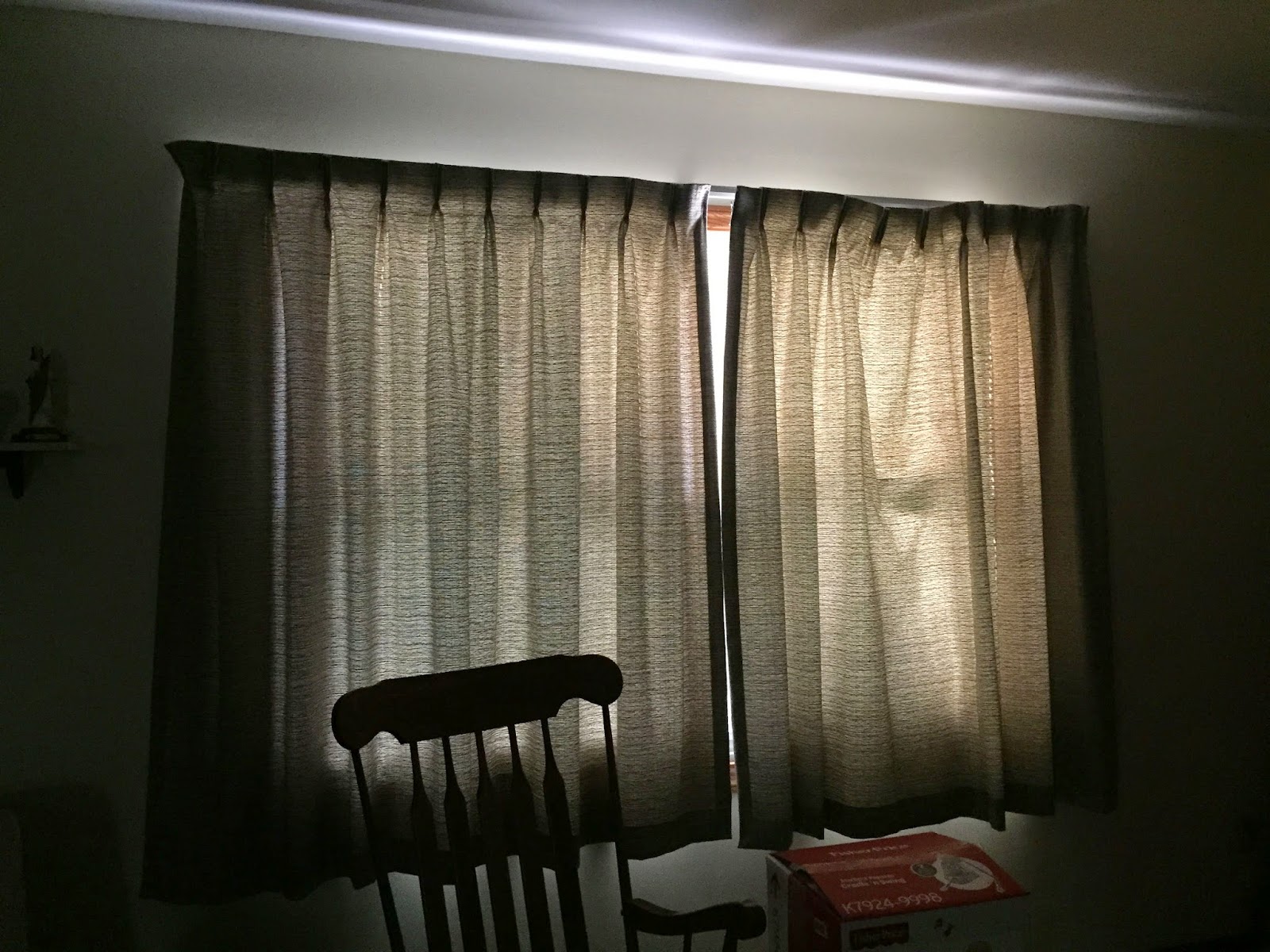 It was a hideous dirty beige that would get stuck when opened and closed and I managed to cut myself on the hooks holding it. So I was ecstatic when we replaced it with this sheer blue one. 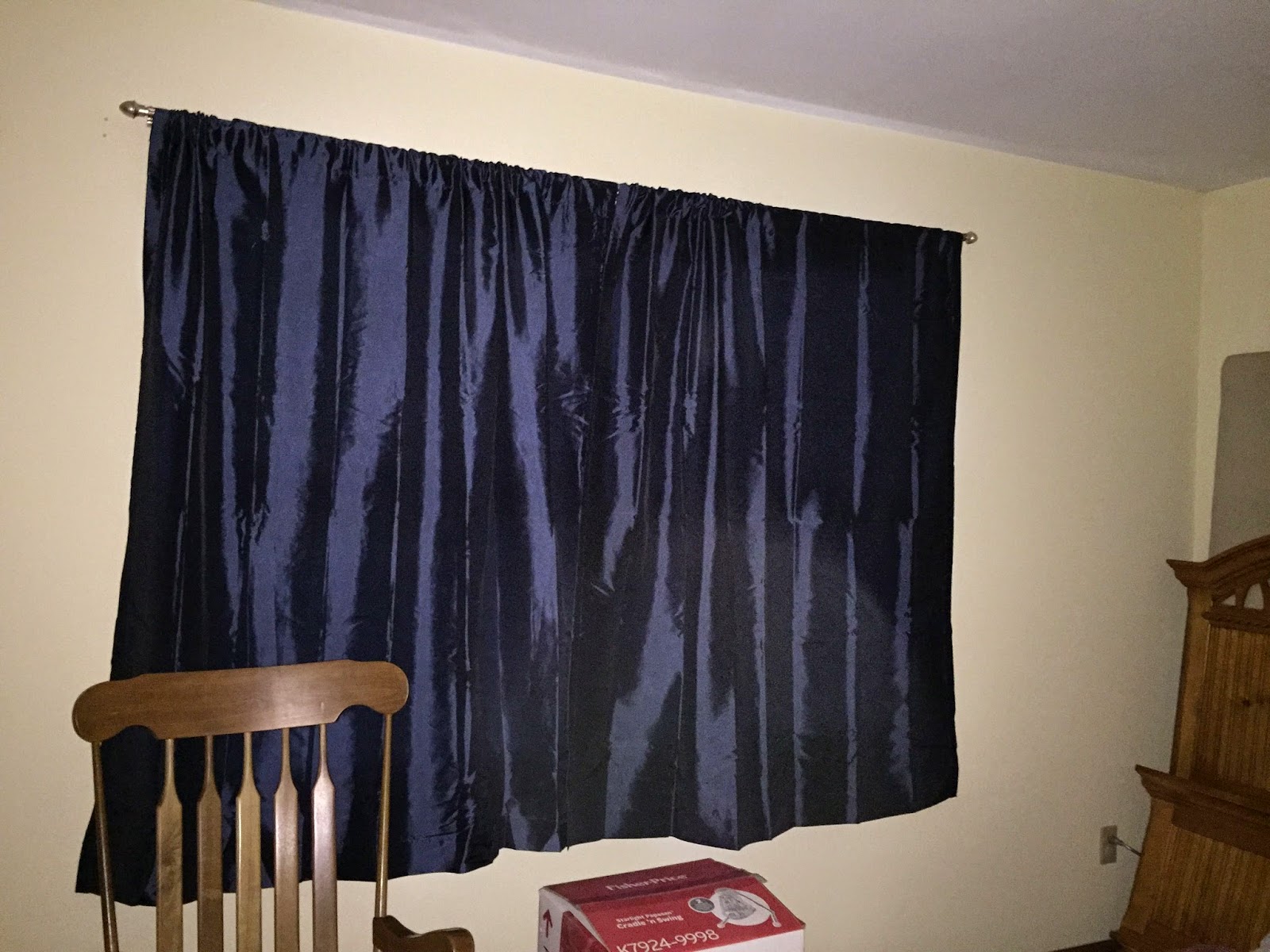 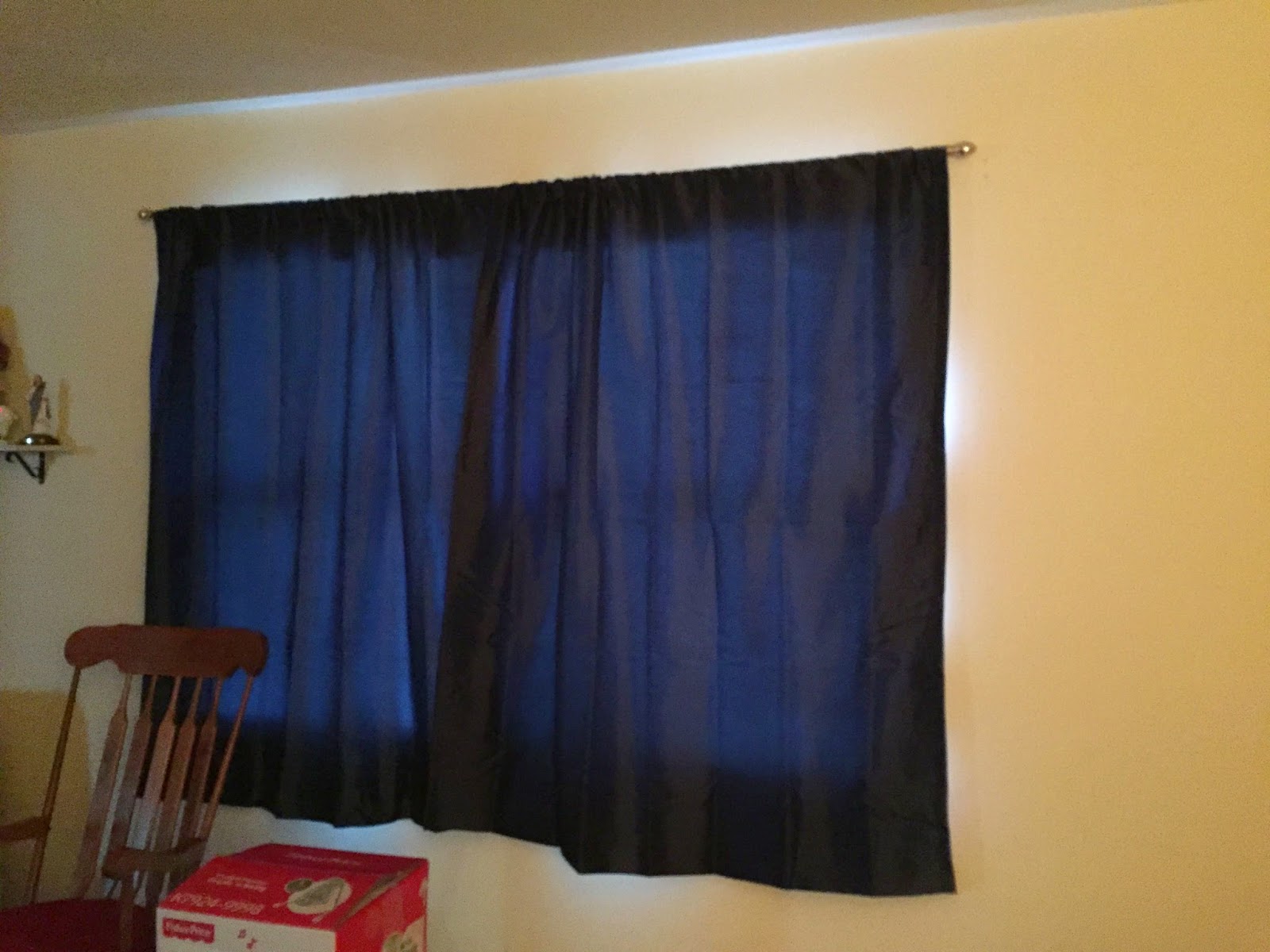 The second thing we did was get rid of an old, rotting wooden step that was nailed to the side of the house. Honestly, I tried to use it once while I was pregnant and forbid anyone from using it I was that worried about it just falling off and someone getting hurt. When my father-in-law, who had worked in construction and concrete for decades, was visiting, I joked how I wish I could have hired him to pour us some concrete steps. He said that there were places that sold concrete steps. I said, "Really?" and "Aren't they heavy as hell?" Yes. And yes. So James and his dad went and bought a double step and used a dolly to roll it to the back door. 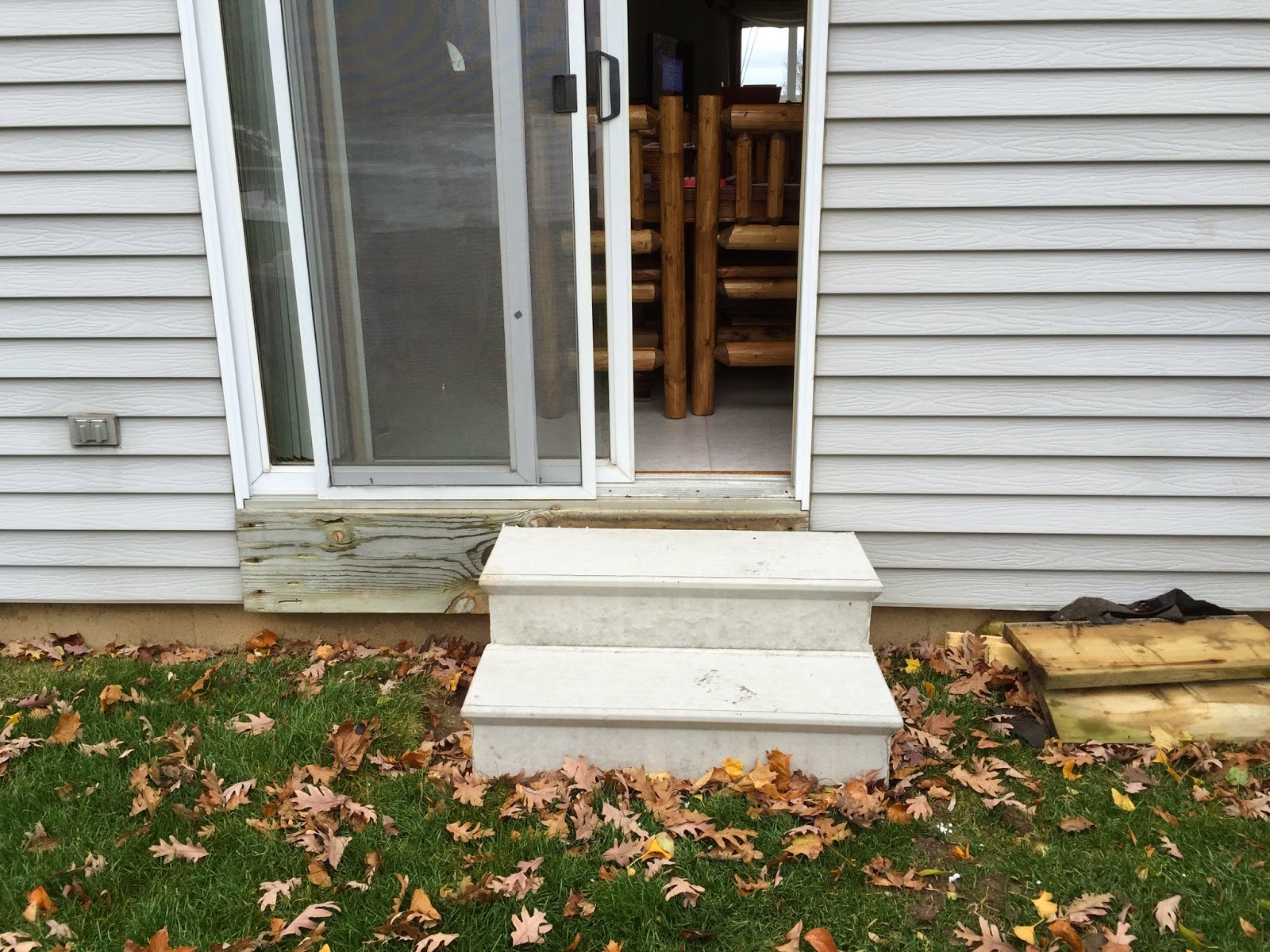 Yes, we still need to even them just a smidgen but they are so much safer than what was there! You can see the remnant of the step on the ground beside it and the board that matched it still attached to the house. And now we can actually use the back door! Yay!

But the most important improvement so far has been a back yard fence, courtesy of my parents: 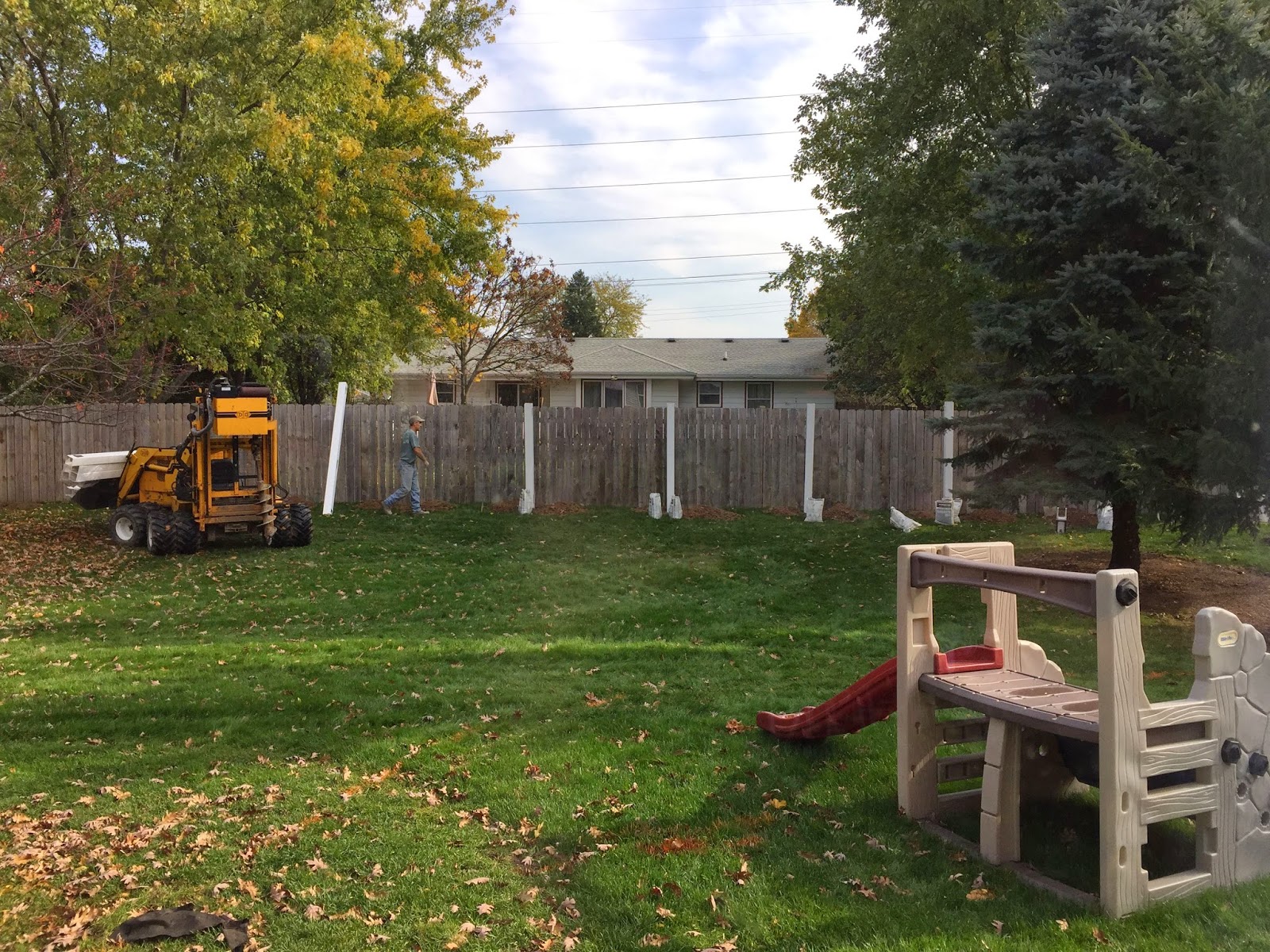 The posts went in two weeks ago. The white vinyl not only gives us a low maintenance privacy fence but also matches the front of the house. 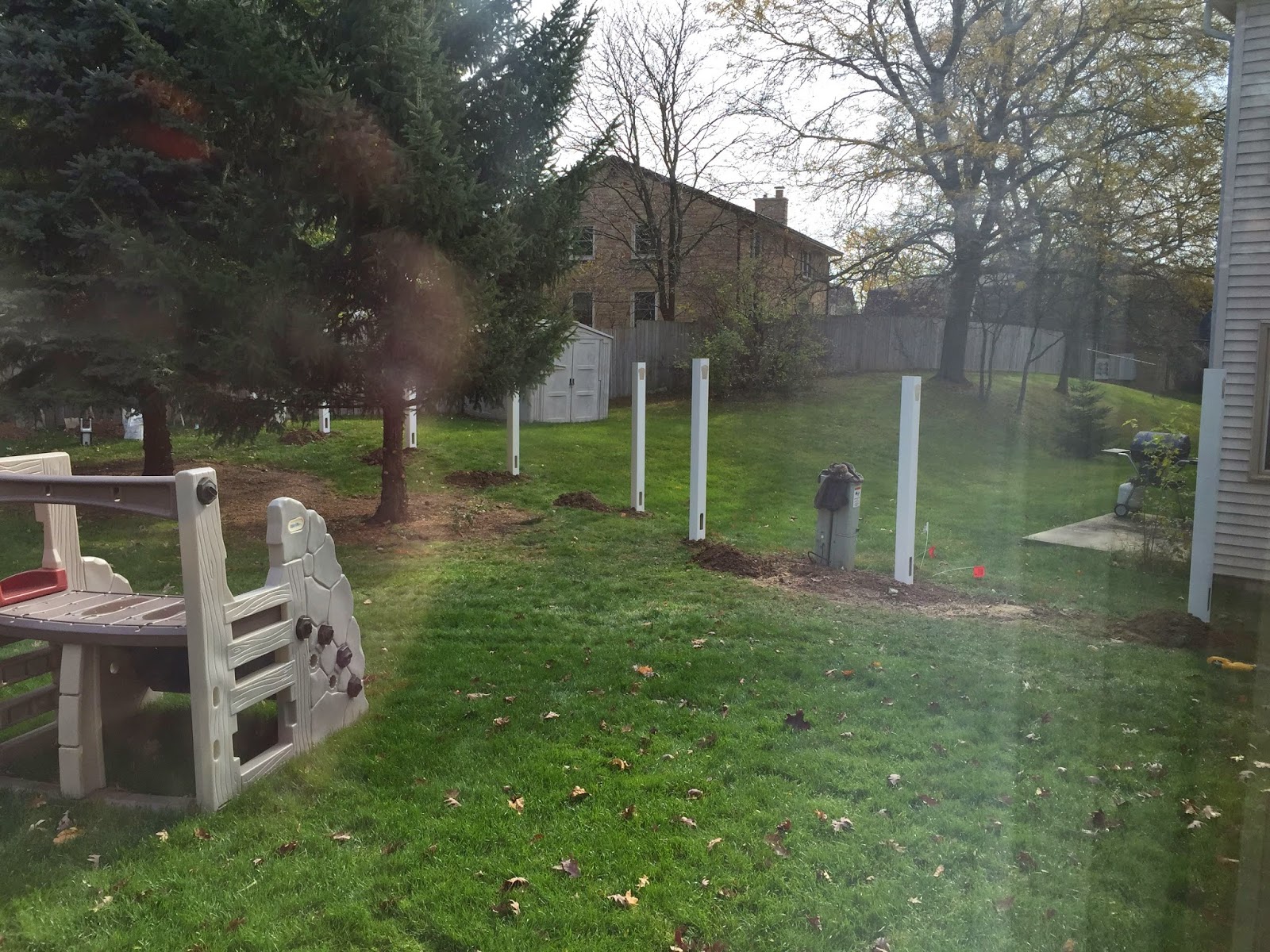 James and his dad removed a large bush (more like 3 that became 1) that was about 10 feet tall and about 10 feet wide that was right where I wanted the fence to go. My goal was to maximize the space of the back yard for the kids but keep that utility box outside the yard and to do that meant the bush had to go. (Frankly I didn't care for it anyway.) 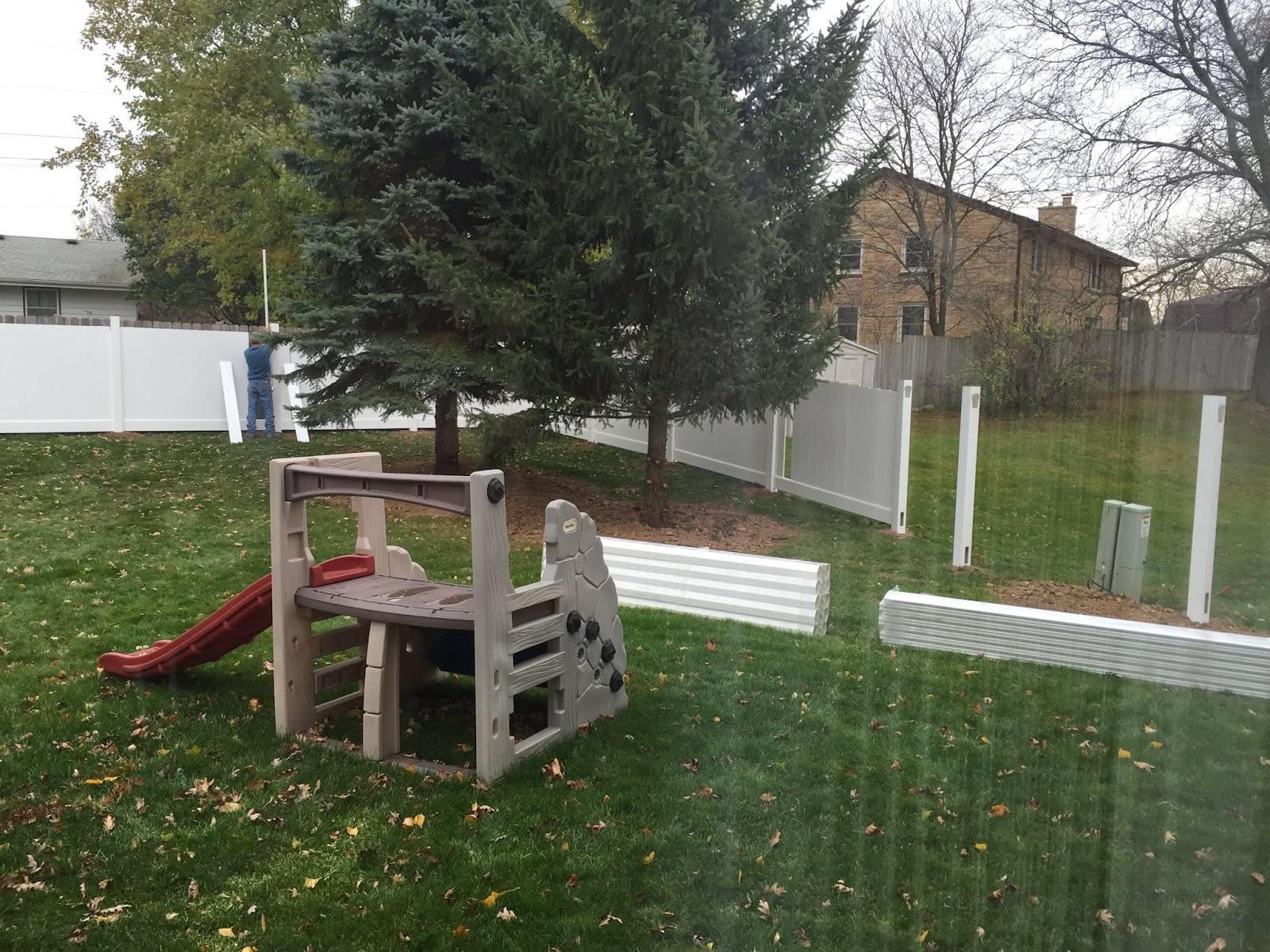 The rest of the fence arrived and was put up last week. James and his dad also cut off the bottom branches of the two beautiful pine trees, which were planted by the sons of the previous owners, so that the kids and dog could run under them without getting lost or becoming sap-drenched pine-needle porcupines. They had to rent a truck and make two trips to cart the bush and the branches to the dump. Alas, I was too pregnant to be of use. 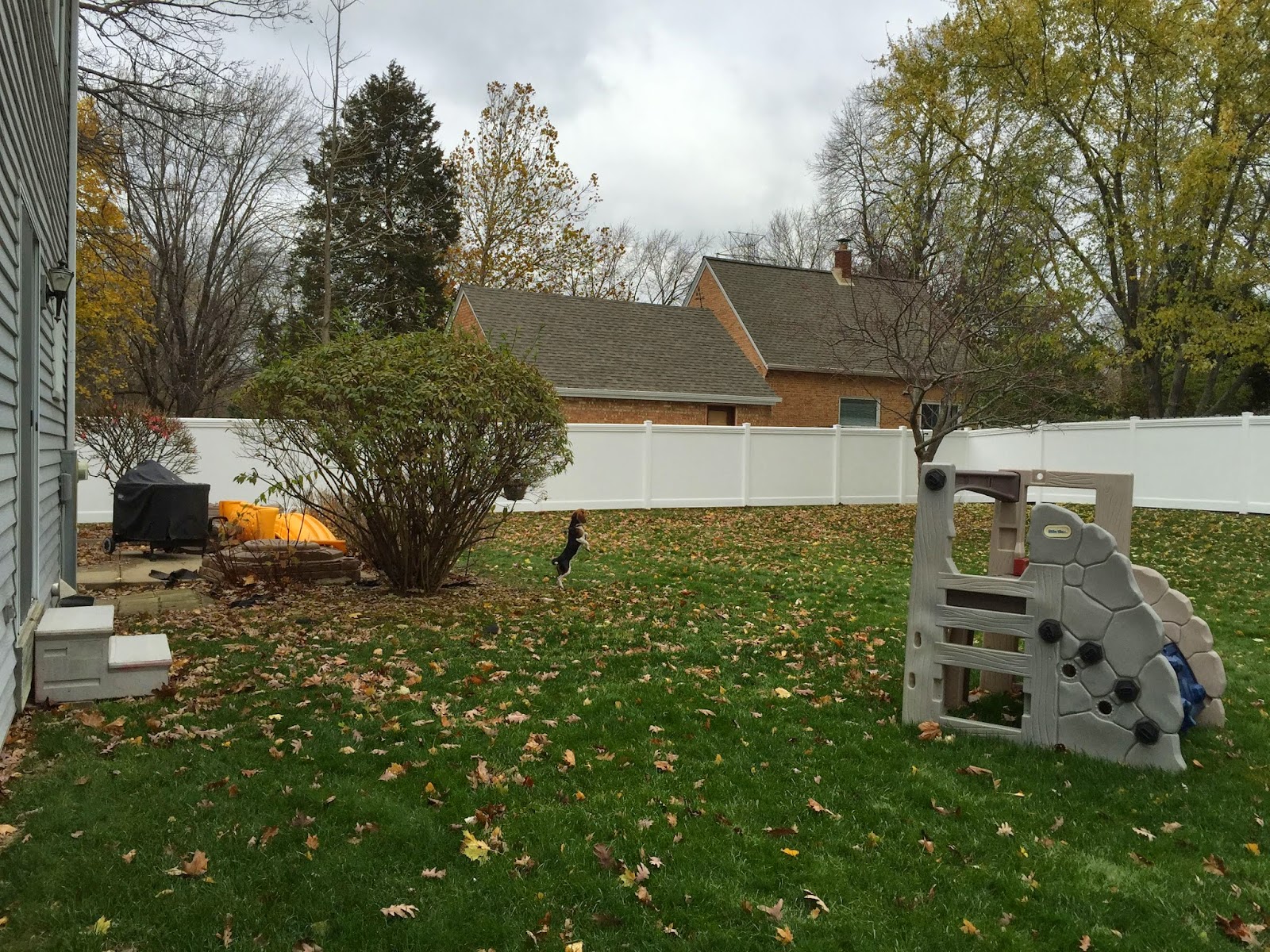 After a month of waiting, the fence is finally in and done. And the kids can run out back and play. We will get our playground back up there, but the fence was the priority. And we've already had offers to help put up the playground from a few seminarians James teaches. (Extra credit? :) ) 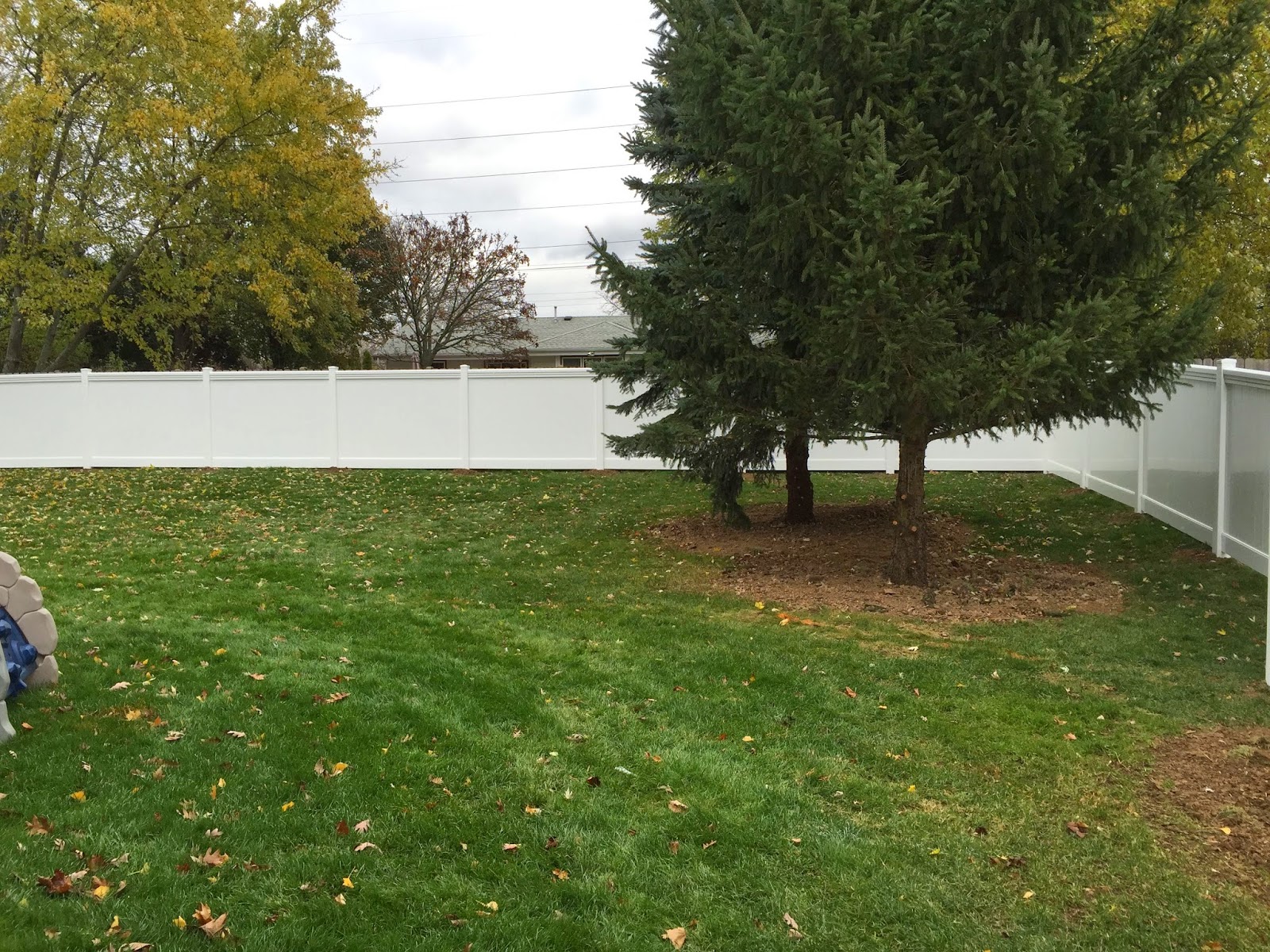 Cecilia is so excited about what we might plant in the Spring. She wants an apple tree. I'd love to get a dogwood planted, though maybe in the front yard. And she wants to plant tomatoes, cucumbers, crocuses, hyacinths, lilies, and a host of other plants and flowers. 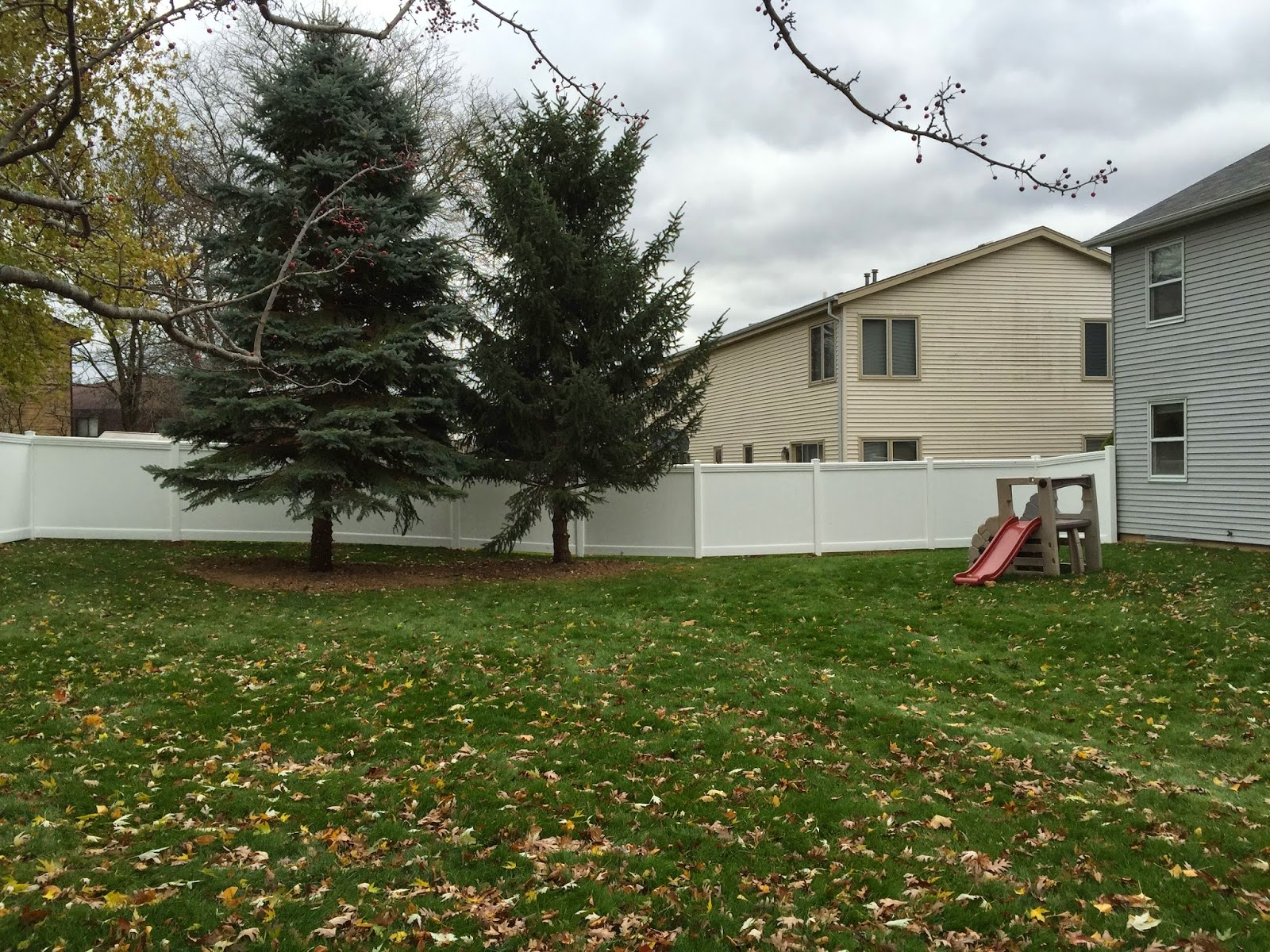 We have a flower bed already in the front that is in need of some major improvements, so some of the flowers could certainly go there. I was thinking of planting a vegetable garden along the fence near the house to the right of the pine trees. The fence should certainly help keep the deer from it. Rosie will have to keep the rabbits away. 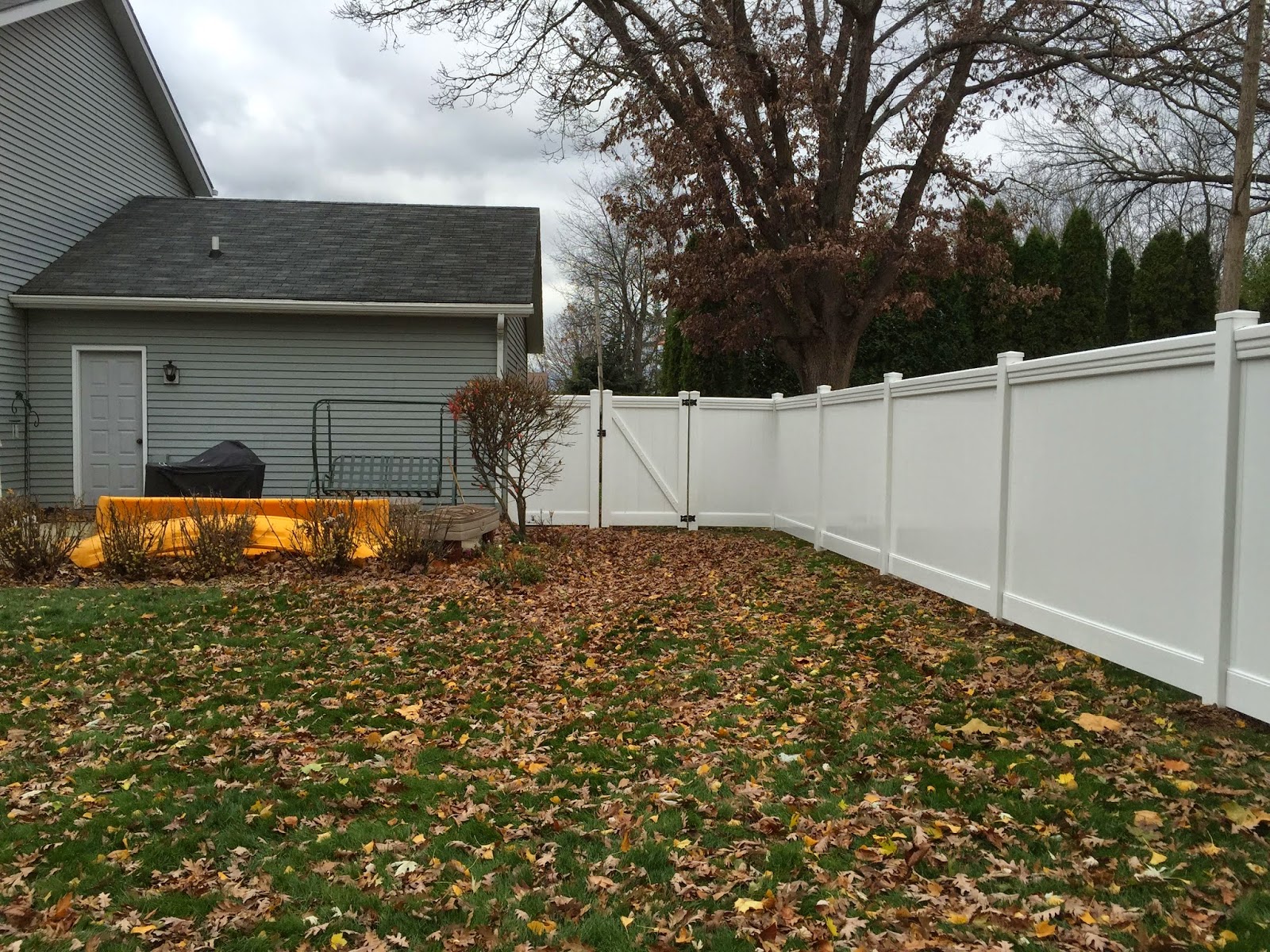 I want to get rid of the little tree and bushes around the patio too... they just crowd the only concrete play area the kids have in the backyard and will be attracting bees right next to their play table and sandbox come spring but I think their demise will wait until after winter. 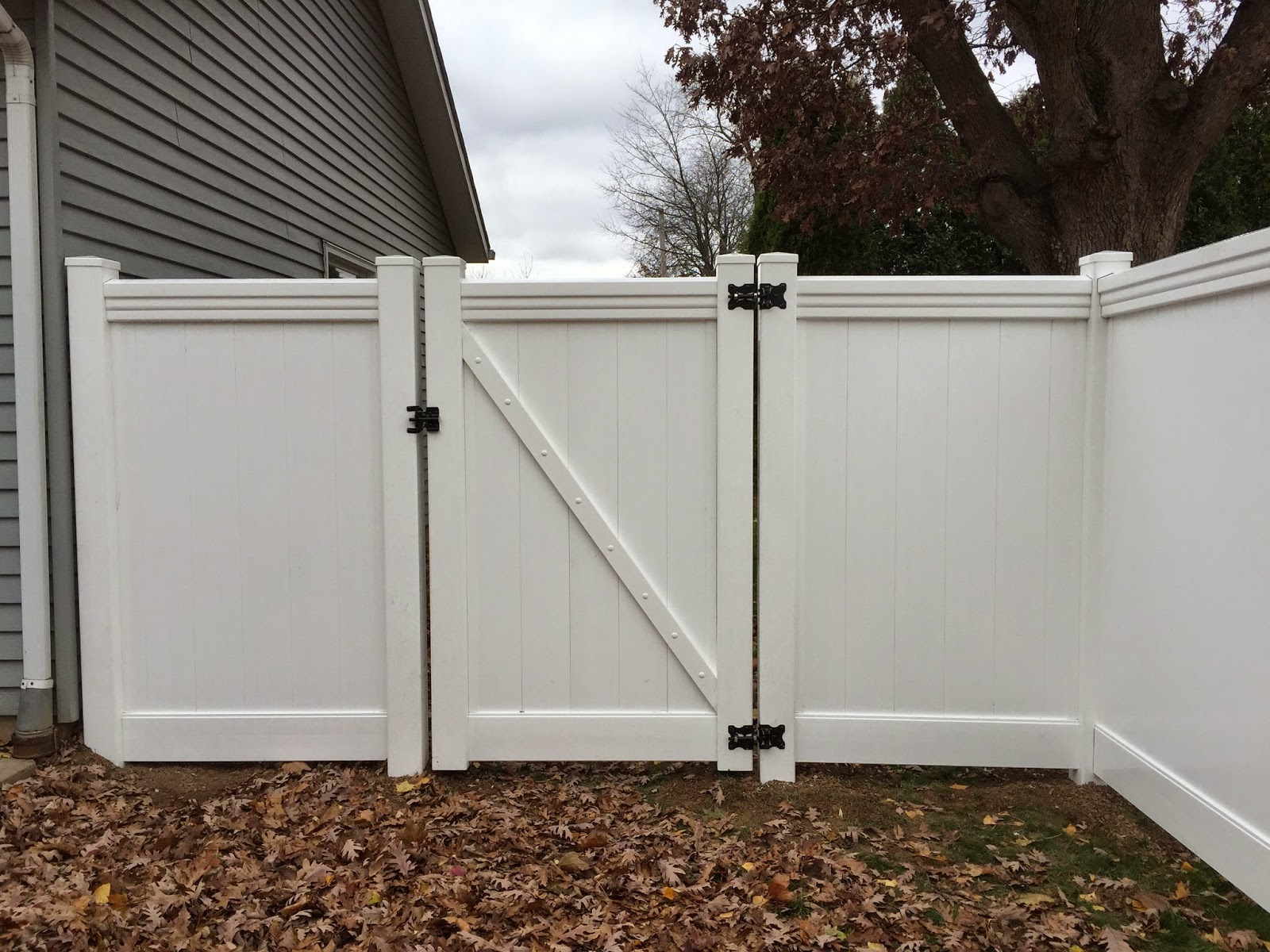 The only gate, and now padlocked, for everyone's safety, especially Teresa's. :) 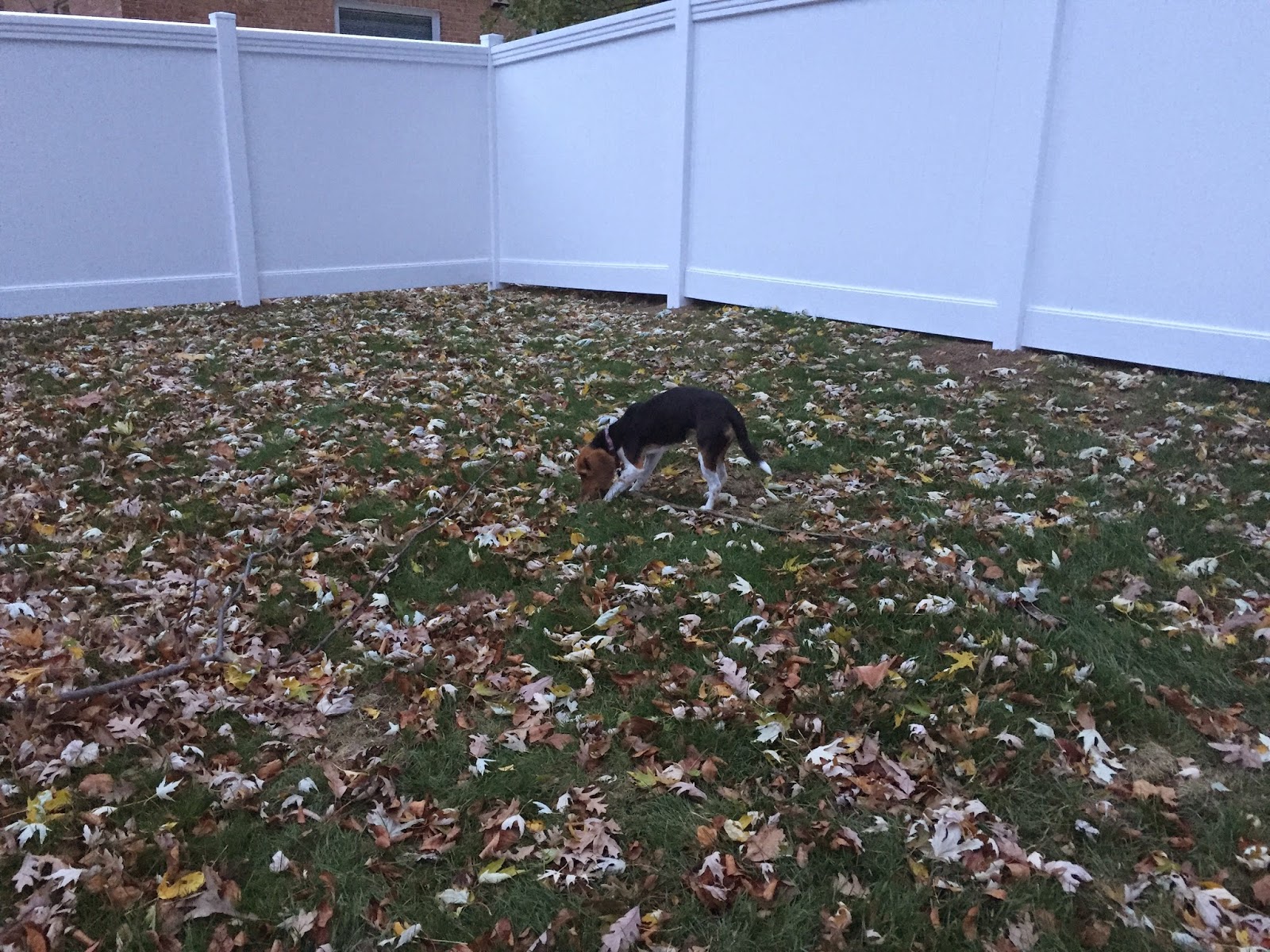 Rosie has certainly been enjoying the yard although I discovered today at lunch that she has found a way to get under the fence and out of the yard. My thought is to buy some logs and just put them around the inside perimeter of the fence. We could even bury them under the fence, which might help keep the rabbits from any garden as well. We will see. One thing at a time, but we are making progress. It is just slow-going what with 6 kids including a newborn and 3 homeschooling. :)
Posted by Katherine at 4:41 PM

Email ThisBlogThis!Share to TwitterShare to FacebookShare to Pinterest
Labels: Home