Considering I was up much of the night with a fussy and non-stop nursing Thomas and then up with Brigid at 5:30, I was impressed with how much we got done today.

Since Brigid decided to get up at the crack of dawn, I put her down for her nap an hour early and we did history. We read about Michael Collins and the friction between Ireland and Britain until Ireland gained its independence. And then we read about Gandhi and the fight for Indian independence. It was a get-independent-from-Britain kind of day. 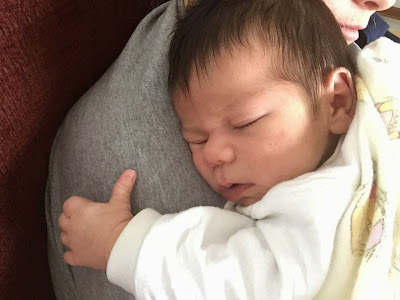 I had wanted to do music, but by then Felicity and Elizabeth were done, so even though Cecilia was anxious to do more, I called it a day. Although Cecilia then typed up the first stanza of her new poem and typed a new blog post for her blog. Yes, I created a blog for Cecilia. And it is precious. But I have it hidden for the moment. I want to put it up but I don't think I want anyone being able to comment on it considering... the internet. So I'm still working on that, but she has written 4 posts already.

No, we didn't take off for Veteran's Day (just like we didn't for Columbus Day or many other secular holidays), but frankly we didn't get a whole lot done either.

Elizabeth did 5 pages of math, Cecilia did her spelling and english, and Felicity did her phonics. After lunch we did religion, reading about King David from his anointing by Samuel to his service to King Saul and his defeat of the mighty Goliath. We went over his persecution from Saul and how he spared Saul's life. After Saul's death we read about David's taking back of Jerusalem and how he danced before the ark returning it to the temple. But we also read about how David was far from perfect, and what he did to Uriah in order to marry Bathsheba and what his punishment was for what he did. We discussed what made David different from Saul and how David prefigured Jesus. This led to a brief recitation of Psalm 51 and a discussion on the psalms.
We then all went out to a used book sale at a local retreat center. Felicity brought her own money with her and paid one woman 25 cents for a pack of backgrounds and sea life stickers. She counted out her own money for it. I figure it helped make up for the fact she hadn't done any math that morning. Cecilia bought a paperback book on the Statue of Liberty and I picked up a hardcover copy of Father Bear Comes Home by Else Holmelund Minarik and illustrations by Maurice Sendak that was in like new condition. Combined both books came to $4.50.

We had dinner at Chili's on the way home and had two different families ask if "all of them were our kids" and "how many girls we had" but both likewise commented on how well behaved they were and how beautiful. Honestly, even I was impressed by their behavior considering how long the food took. Cecilia, hearing the comments, observed, "We sure do attract attention." When I posted about that on Facebook, one friend remarked, "A great act of the New Evangelization!!!!!" It is comforting to think "just" raising 6 kids counts as my contribution to the New Evangelization. :) 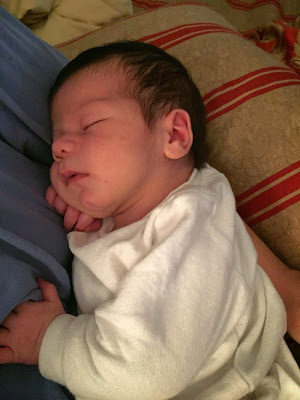 This morning went fairly well. Felicity did all 10 pages of her math. Elizabeth finished the remaining 5 pages of her math and did all her phonics. Cecilia did her latin, handwriting and a math lesson.

After lunch we did music. It was a bit challenging between Thomas' grumpiness and Teresa's moodiness, but Cecilia took over reading the book about each of the percussion instruments. Interestingly it was probably the worst music lesson we've had, not because of anything Cecilia did or didn't do leading, but because, between the little one's distractions and how many percussion instruments there are, Felicity and Elizabeth only half paid attention. It didn't help that I had an incredibly hard time finding any remotely decent coloring page of the percussion instruments and even then, to make it large enough, it was pretty blurry. We did, however, go over the differences between the snare drum, bass drum and timpani or kettle drums and the differences between the piano and the harpsichord and the celesta. Cecilia loved hearing some Bach on the organ and her beloved Beethoven on the piano. So it wasn't a total waste, but it could have been better. Frankly, some half decent coloring pages would have gone a long way. 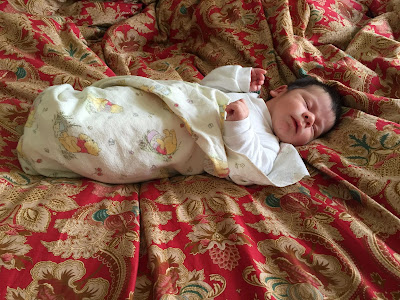 Thomas seems to have decided that laying for some "Tummy Time" is not such a bad deal at all and can be quite enjoyable. As long as your sisters don't lay on top of you hug you too much. And he has concluded a diaper change is not always worthy of being cried over.

Cecilia finished reading The Voyage of the Dawn Treader and has moved on to The Silver Chair. I confess I can't quite remember which order Lewis wrote them in, but I've told her after this one she should read A Horse and His Boy and The Magician's Nephew before reading The Last Battle. All three of my reading girls read books daily, and especially at bedtime, but I try to encourage Cecilia, and a bit Felicity, to read chapter books in addition to all the picture books and comic books. 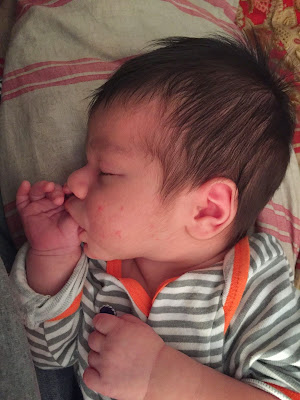 Visit The Wine Dark Sea for more Guilt Free Learning Posts!
Posted by Katherine at 8:20 AM