I apologize in advance for how lengthy this post is but, I swear, this was ALL in one week. It has just been a long one. We packed it in before the break. :)
Monday, November 17th

Monday was exhausting. James woke me at 6:30 telling me he had been up since 4:40 with Teresa. And since he had been sick all of Sunday, he went back to bed and I got Teresa her breakfast. When I reminded the girls to brush their teeth and hair, they asked about the chore charts I had been working on on Sunday. Once they got their hands on them, there was no stopping them. They wanted to do everything on their lists. I spent the hour before school showing Cecilia how to scrub toilets and start the washing machine and dryer and how to mop the bathroom and showing Felicity how to wipe bathroom counters. There are some chores each of the older three have every day and some that are once a week. To be honest, I wasn't planning on starting using the chore charts this week. I'm not sure I have them exactly how they want them, but I guess there is no better way to find out than to test them and the girls were so anxious to do chores no parent in their right mind would discourage them. It was exhausting, but I did end up with 2 clean bathrooms, a vacuumed office and living room, and all the dirty laundry collected, sorted and a load started. All before school.
Once we sat down, all three girls did their geography. Cecilia also did her latin and english. Felicity also did her handwriting, spelling and finished her last poem for 2014. Elizabeth also did her spelling.

After James cooked the steaks we had planned to have on Sunday for lunch, I did history with the oldest three. We talked about the Treaty of Versailles that ended WWI and why and how many ways it was problematic. We also talked a bit about Joseph Stalin and the consequences of communism in the USSR and what a horrible and cruel leader Stalin was. Ironically enough, they had a bit of a mental image of Siberia and the gulag from Muppets Most Wanted. Obviously more of a G rated version, but at least it gave them an idea of the cold camps Stalin sent so many of his own people to.

Then I finished cleaning up lunch and it was time to bake cupcakes. No, I wasn't glutton for punishment. Felicity's AHG unit are working on earning the Cake Decorating badge and she was asked to bring two cupcakes to their meeting that night. And you cannot bake just two cupcakes. So we made a batch. But, never you fear, I had a whole crew lining up to help eat them. Teresa couldn't even wait and ate 3 before I could even get any icing on them! Everyone else had two. Felicity, Cecilia and Elizabeth each helped bake the cupcakes. I confess I was not up for the girls to decorate them. I had already wiped the table 3 times that day and knew the icing would be enough of a 4th clean up.
After about an hour break, I took the oldest three girls and Thomas and drove to our semimonthly AHG meeting. With the wind chill it was -6 outside. Thomas was very bundled and I used multiple blankets on top of his carrier to keep warm air in and the wind out, and it worked so well that he slept the whole way there and through the whole meeting. During the meeting, Cecilia worked on her music appreciation badge and had so much fun seeing the various musical instruments other girls had brought in to play. Felicity, of course, decorated her cupcakes and ate one of them. Elizabeth and the Pathfinders went over the Trinity and did a little shamrock Trinity craft from Oriental Trading, began learning their next Bible verse, "Love the LORD your God with all your heart, and with all your soul and with all your strength," and then went over the creation story and made their own 4th, 5th, and 6th day creations out of play doh in shadow boxes.
Tuesday, November 18th

With James down and out all day Sunday, and after the long and busy day that was Monday, I got up Tuesday and didn't want to do much of anything. We did get some school done though. Elizabeth finished her last poem before Christmas and did her handwriting, phonics and part of her latin. Felicity did five pages in math and Cecilia did her vocabulary and finished her last poem before Christmas. The promise of finishing a subject until after Christmas is a definite motivation.

After lunch we sat down and did religion. We read the story of Solomon and his request for wisdom. We talked a bit about wisdom as a gift of the Holy Spirit we receive at our Confirmation and how Solomon used it to figure out to which of two women a baby belonged. Solomon used his wisdom to help others and, through others, God further blessed him with honor and riches. But we also talked about how Solomon married women who didn't believe in God and who turned his heart from God to worship false gods and for this reason God didn't give Solomon's throne to his son. And then we talked a bit about the prophet Isaiah and some of the texts that foretell the Messiah. We briefly reviewed all of the Old Testament figures we have gone over leading up to the promised Savior. 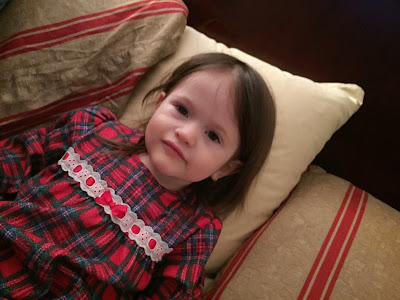 Wednesday was Felicity's 7th birthday, so we didn't do any school work today. It was cold and snowing again, but we cleaned up a bit, ate doughnuts for breakfast (and leftover doughnuts for lunch), played video games, had dinner at Red Robin (the girls' favorite restaurant), and opened presents. It was a nice break day for me too, especially after losing 2 hours sleep the night before to a sobbing Brigid. Her three new teeth have broken through but I think their progression out was bothering her as she seemed to not want to stay laying down from 11:45 or so until 1:30. 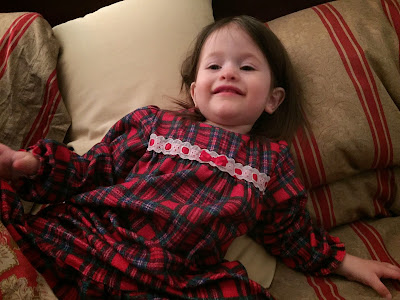 Today I was hoping to get more done than we did but progress is progress. Felicity did her Latin and finished her math. Elizabeth finished her latin and did 5 pages of math. Cecilia did a math lesson and her spelling.

After that we cleaned up some and then the kids played. I did some laundry and watched Fr. Barron's New Evangelization. I have been trying to wrap my head around what the "New Evangelization" is and how it is different than simply evangelization. Unfortunately the 3 year old and 1 year old didn't let me hear everything on the video but I think James helped fill in some of the gaps. In general, I don't think it has been explained very well to the faithful. 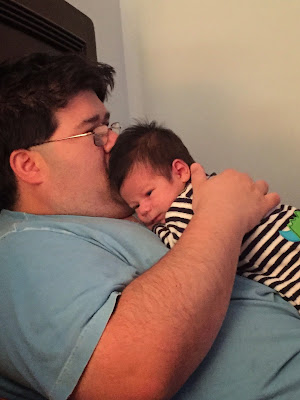 Friday we managed to get a bit more done, though not everything. Cecilia did another math lesson and her handwriting, Elizabeth finished her math and did her english and Felicity did her english. What did not get done was Felicity's phonics and 2 of Cecilia's math lessons. But, we are taking off the week of Thanksgiving, have a week of school after that, and then a catch up week before our Christmas break, so even if we remain behind for two weeks, we will soon be at a catch up week before our break. This should also give us plenty of time to do our science lesson I didn't get to this week on astronomy.

Felicity had her annual check up and got a clean bill of health. Her homework is to try more fruits and veggies taking "at least two big girl bites" of each new kind. She is my pickiest eater. Part of the problem is that she really prefers things spicy or salty. She is not a sweets girl. And there are no salty or spicy fruits. So she has no interest in any fruit. She loves bacon and pepperoni and salsa and chips and popcorn. She will eat broccoli if there is enough salt on it, thank Heaven, but we need to expand her horizons.

We had a bit of family time watching Masterchef Junior. My girls, especially Cecilia, absolutely love this show. Seeing 8, 9, 10, 11, 12 and 13 year olds cooking like professional chefs just wows them. Cecilia in particular is eager to learn to cook more. Hopefully this coming week will afford her some good opportunities to get her hands dirty. :)

We intentionally did the food shopping Friday afternoon so that we could all go to the local science museum Discovery World. It was actually cheaper to buy an annual family membership than a single visit ticket for each of us that is 3 or older. So we can go back for free any time in the next year. Overall it was an enjoyable museum, but it is geared more towards those in high school or older.

Our favorite area had to be the aquarium. Understandably, it focuses on the Great Lakes and the ecosystems involved. Felicity got to push the "Big Storm" button that created an indoor thunderstorm and scared a couple of her sisters. She relished it.