I hope everyone had a very blessed Thanksgiving!
Monday, December 1st

This week is our last "full" week of school before Christmas. "Full" because while the girls have most of their subjects to do, we are already done with latin, history and geography until after the New Year.   Next week is a "catch-up" week should we need it to finish anything before the break.

This morning wasn't the greatest since, when the cat is away, you know what the mice do, and I had to make a couple of phone calls. But Felicity got done her handwriting and english, Elizabeth did her handwriting and spelling and Cecilia got done her english. So it wasn't totally unproductive. The girls began their Lego Advent calendars and we began our Jesse tree. A couple of years ago I received these as a gift 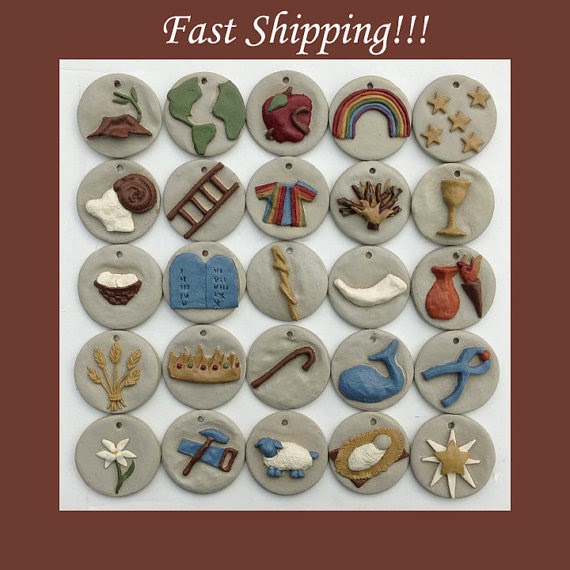 And I bought Ann Voskamp's Unwrapping the Greatest Gift to read each day to the girls as we put our ornaments on a wonderfully cheap and reusable $5 fake tabletop tree I had already lighted! 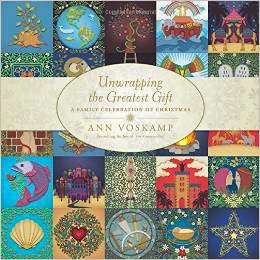 I read the excerpts while Cecilia displayed the ornament. It was a wonderful refresher for the girls who had been learning about the Old Testament, Salvation history and the line of Jesse this fall.

After lunch I got Brigid and Thomas down for naps and did religion with the oldest three. We talked about the Bablonian exile and some of the prophets God sent to call the people of Israel back to him. They colored pages of Daniel in the lion's den and we talked about how the people of Israel often treated the prophets God sent to them and that John the Baptist was the greatest of the prophets as he heralded the Messiah. We read the story of Zachariah and the promise of John's birth. Elizabeth especially loved hearing about her patron Saint. We talked about what kind of king the Hebrews thought God was going to send them and how they might have responded when Jesus turned out to be not what they expected. And finally we read the baptism of Jesus and the temptation of Christ in the desert before He would begin his ministry. In hindsight it would have made more sense to just skip religion this week and do this chapter after Christmas but I do like that we completed the Old Testament before Christmas.
After a brief break to catch up on Facebook and James brought home pizza for dinner, I packed Cecilia, Felicity, Elizabeth and Thomas in the car and we drove to our AHG meeting. Cecilia made advent calendars with her unit while Felicity made an angel as a present for her daddy and me. Elizabeth and the Pathfinders made Cheerio bird feeders with pipe cleaners, practiced singing "This Little Light of Mine" and made paper and wood advent wreaths that they will be able to add paper flames to as Advent progresses.
Tuesday, December 2nd

This morning was a bit limited again as I had an appointment, but Cecilia got done her spelling, Felicity got done her spelling and Elizabeth got 5 pages of math, mostly all while I was gone. Thomas and I went to our 6 week check up. Thomas had gained 2 pounds putting him at 11 pounds, 1 ounce, and I lost 18 pounds. It is funny how child birth is like a crash diet, even with chocolate and pizza. He is strong, healthy, with good color and a hearty appetite.

After I picked up chinese for lunch, I read the excerpts for the second day for our Jesse tree and Felicity put the ornament of the earth on.

Melanie had shared an absolutely adorable video on Facebook of Lucy saying her ABCs. Lucy and Brigid are less than a week apart and can even look similar and Brigid was enamored with her video. She must have watched it over 18 times taking up the entire computer screen before heading to bed that night. She loved watching her, would demand, "Again! Again!" after it ended and mastered restarting it on her own. My apologizes for Teresa's crash towards the end - she dumped a tub of Duplos in my office. And my sincerest apologies to Melanie and Lucy for the lighting on the screen.... until just near the end adorable Lucy looks radioactive or something the way the camera was compensating for the lack of light in the room. A professional photographer I clearly am not.


James set up his keyboard in the basement and the older girls have been having fun playing on it. I found this on my iPad:

Considering she hasn't had a lesson in about 2 years and even that had only had a few, I was pleasantly surprised. She very much wants lessons though, so hopefully in the new year she will learn more. Gotta love sisterly photobombs, no? :)

Felicity and Elizabeth both finished all their math. Cecilia finished her handwriting and did one and a half math lessons, both of which were from the week before Thanksgiving but at least that completed the lessons we were behind in.
Honestly, the rest of the day is a bit of a blur. I basically took the rest of the day to do laundry and rest. Oh, and I gave Thomas a bath, which makes his hair look like this: 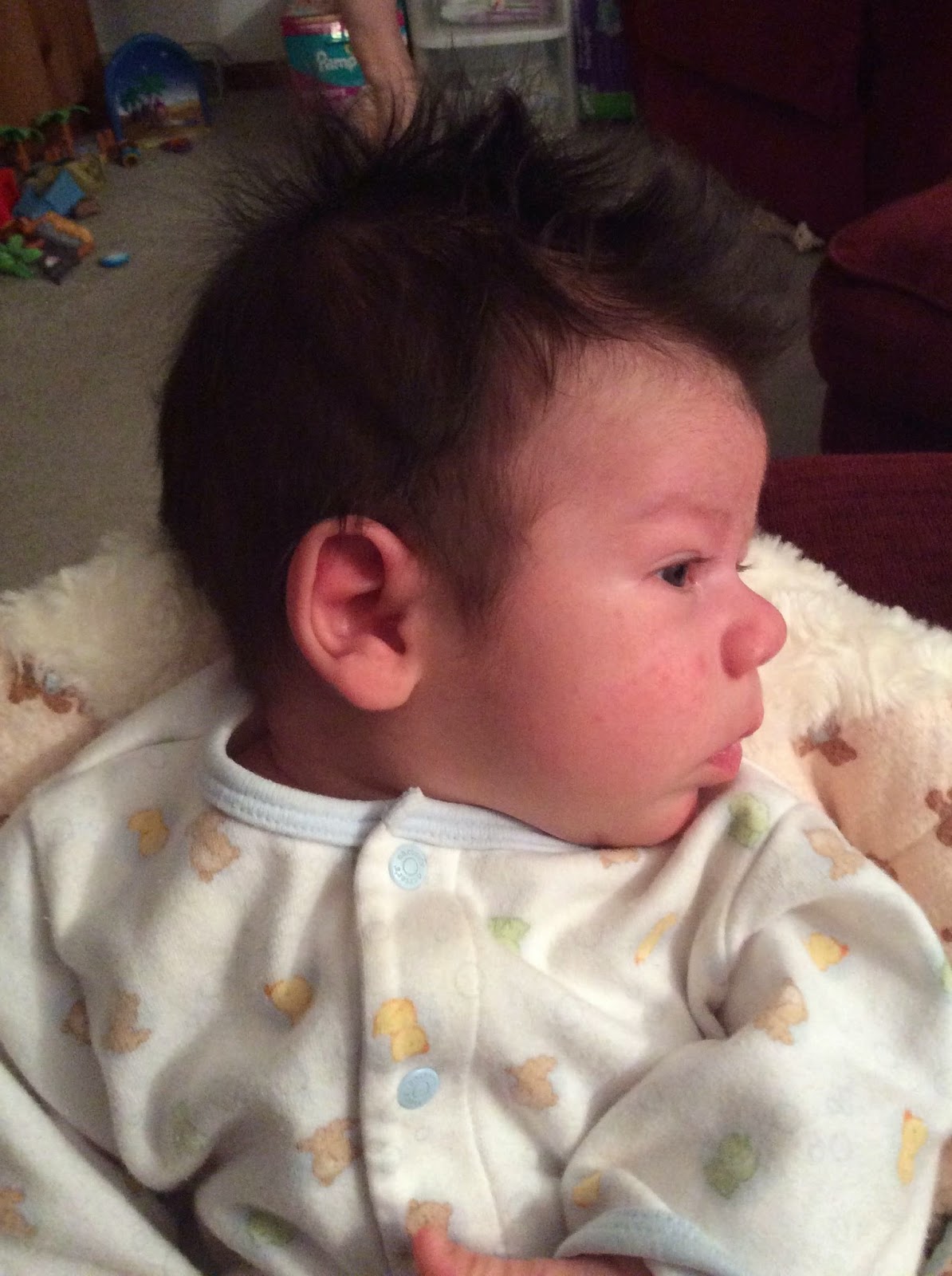 Elizabeth did her phonics, finishing her school for the week. Felicity did 5 pages in phonics and Cecilia did 1 math lesson. After that we pretty much cleaned, vacuuming and picking up toys and sweeping and getting the house presentable for Friday.

We had our first Wisconsin at home play date! Overall I'd say it went well. Yes, there was broken glass (a small old hand held mirror) and pee on the floor, but the kids had fun. Their oldest daughter, who is 7, was an absolute sweetheart and the girls got a hint of what living with a little brother will mean from their 5 year old son. And they want to do it again! Hopefully soon.
Saturday, December 6th

The kids woke up to stockings full of chocolate coins, St. Nicks, reindeer and snowmen and each one got a new book. Brigid got a Sesame Street board book Have Yourself a Furry Little Christmas and Teresa got Elmo's Merry Christmas (a Lift-the-flap book). No neither one is stellar literature, but we already have several wonderful Christmas board books and they are both very fond of Elmo and love the lift-the-flap books, which last much better than any pop-up book. Elizabeth got Jan Brett's Home for Christmas. Felicity got C. Lourdes Walsh's The Story of Our Lady of Guadalupe, Empress of the Americas and Cecilia got Laura Ingalls Wilder's A Little House Christmas Treasury: Five Holiday Stories. I was only alerted after I ordered these that there is a new noteworthy St. Nicholas book out, but I've put it on our wish list for next year. I'm sorry I have no pictures from St. Nicholas' Day this year... the girls were simply too fast for me and I was too busy with little ones and life. On the upside though, I gathered a great list of Christmas books we don't have to be better prepared for next year!

We also caught up on our Jesse Tree, which we got two days behind on. And then had to skip the book's version of December 6 since my next ornament matched December 7th. Oh well. C'est la vie.

James took Cecilia, Felicity and Elizabeth to the Milwaukee Symphony Orchestra performance where the girls got to see and hear a live symphony. It is a nice way to end our study of the instruments of the orchestra. Cecilia especially loved seeing the harp and she was so happy they played part of Tchaikovsky's The Nutcracker before their music inspired by Chris van Allsburg's The Polar Express. 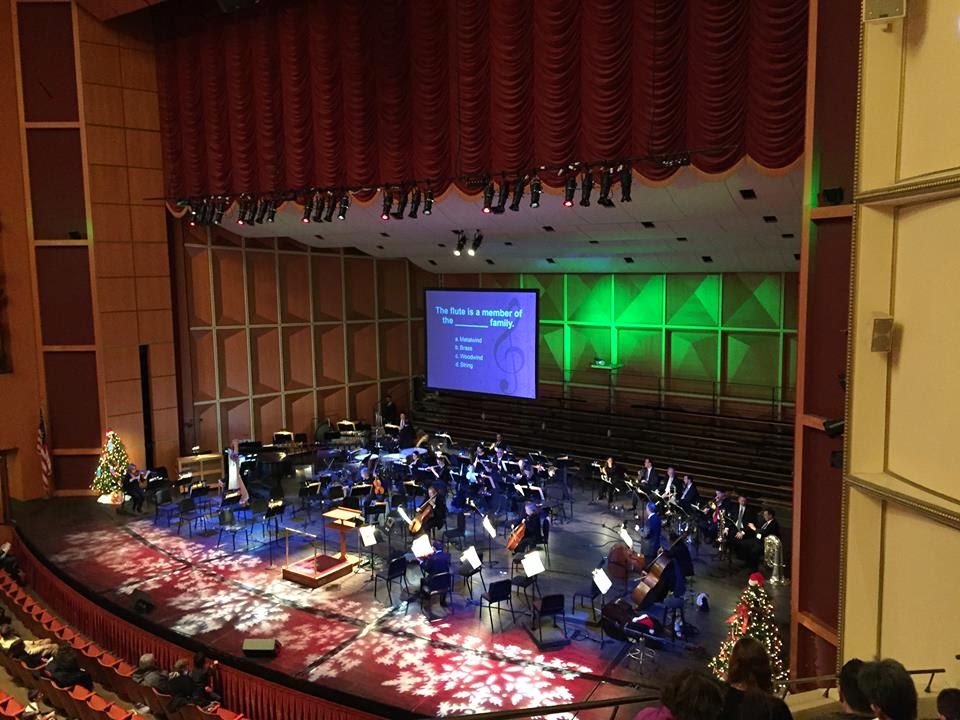 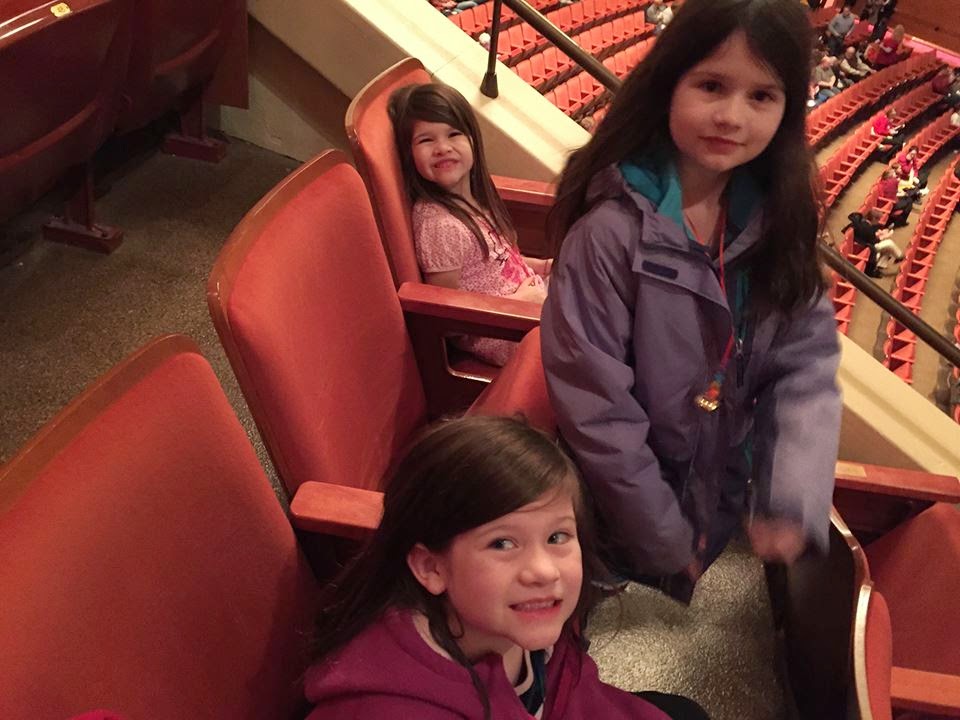 Posted by Katherine at 5:53 PM