I bet that Mary and Joseph didn't plan for the Savior to be born in a stable. So I know I'm not alone when Christmas doesn't quite go as planned.

We were running late leaving so I never got a picture of us all. Maybe I can get one on Sunday? There was no parking so we had to park in the street a block away. There were no seats for us so we sat on the floor behind the last pew. And I'm sorry to say there were no ushers helping seat people, so we were not the only families in the back with young children or infants and there were several very pregnant women as well to whom no one offered a seat.

Without a pew to keep her in Teresa took a walk during the procession.  We couldn't see or hear much of anything and since we forgot our bag for church books in the car the kids were bored. Teresa danced in the remaining walkway in the back of the church until she fell over and then lay there with her legs in the air advertising the fact she isn't potty trained yet. Meanwhile Brigid took off her shoes and socks and rolled around on the floor. Felicity, not used to sitting on the floor in her nice dress, had trouble remembering to keep her dress down. 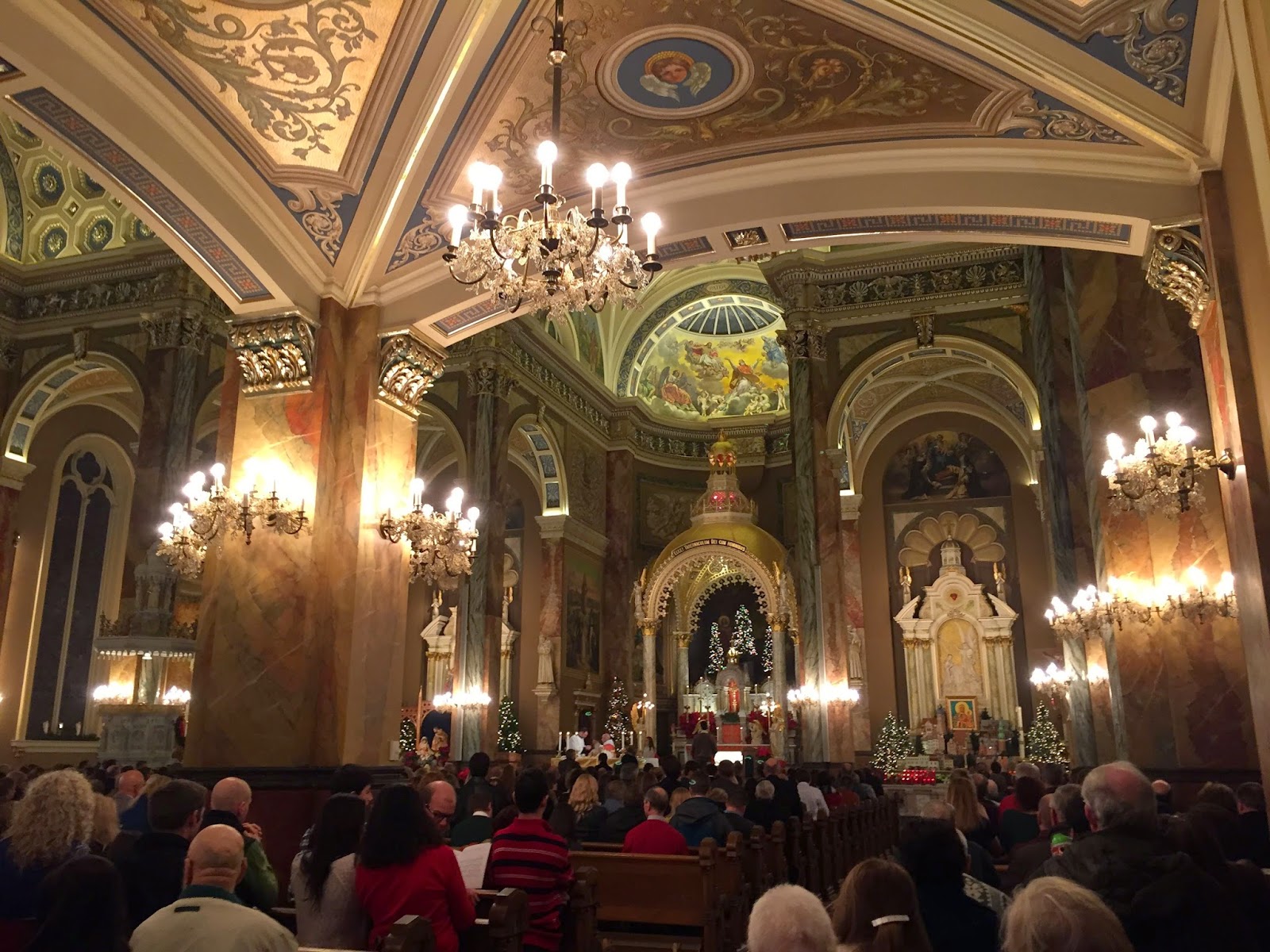 The highlight had to be when Teresa suddenly decided she needed a tushie change and without warning removed her diaper.
A kind Franciscan seemed very understanding as he wished us a Merry Christmas while we chased Brigid who refused to get her coat on and made our exit after communion.
I had to remind myself, Christmas is about a child. And I'm grateful I had a mass to go to even if it didn't go quite how I planned.

Afterwards we went to dinner at Fridays. It too, however, did not go as planned. They seated us beside the door so every time it opened the cold draft stirred Thomas. Although we are reward members, they only brought us one basket of chips and salsa for the whole table and even that basket had only a couple handfuls of chips in it. We had to ask for a second. Then when we tried to order a bottomless appetizer of potato skins, we were told the waiter would need to see if they could do it because of the size of our party. Never mind that our party only has 2 adults and one of the kids doesn't even eat solids. And even then it took quite a while to get the second serving of potato skins. Being stingy with customers does not beget more customers.

The entrees went fine but the waiter never asked about refills on the kids drinks, which we do not allow so they don't fill up on too much chocolate milk instead of their meal, and just brought more chocolate milks. (We always just get them ice water once they finish their milk.)

Then we drove through a local neighborhood known as Candy Cane Lane with many Christmas lights up. Some houses were beautiful, some fun, some funny, some simple, some complex but the girls enjoyed them all. Teresa was a bit disappointed there were only 3 inflatable dinosaurs. Alas.

Once we got home, we finished watching The Empire Strikes Back, which we began earlier that afternoon. The girls had never seen it before so of course we had to finish it before bed. Once the girls were in bed though, we went to work. 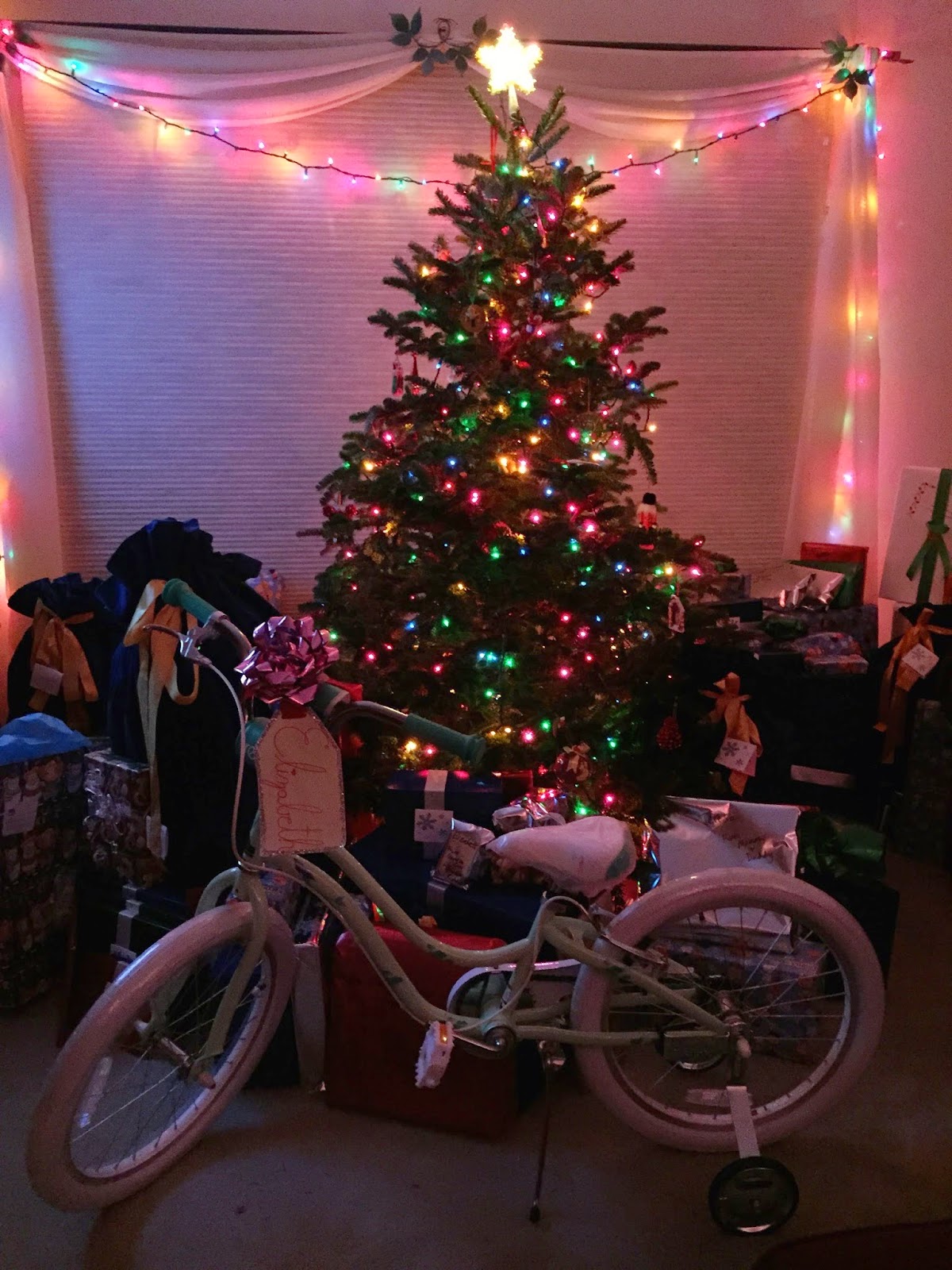 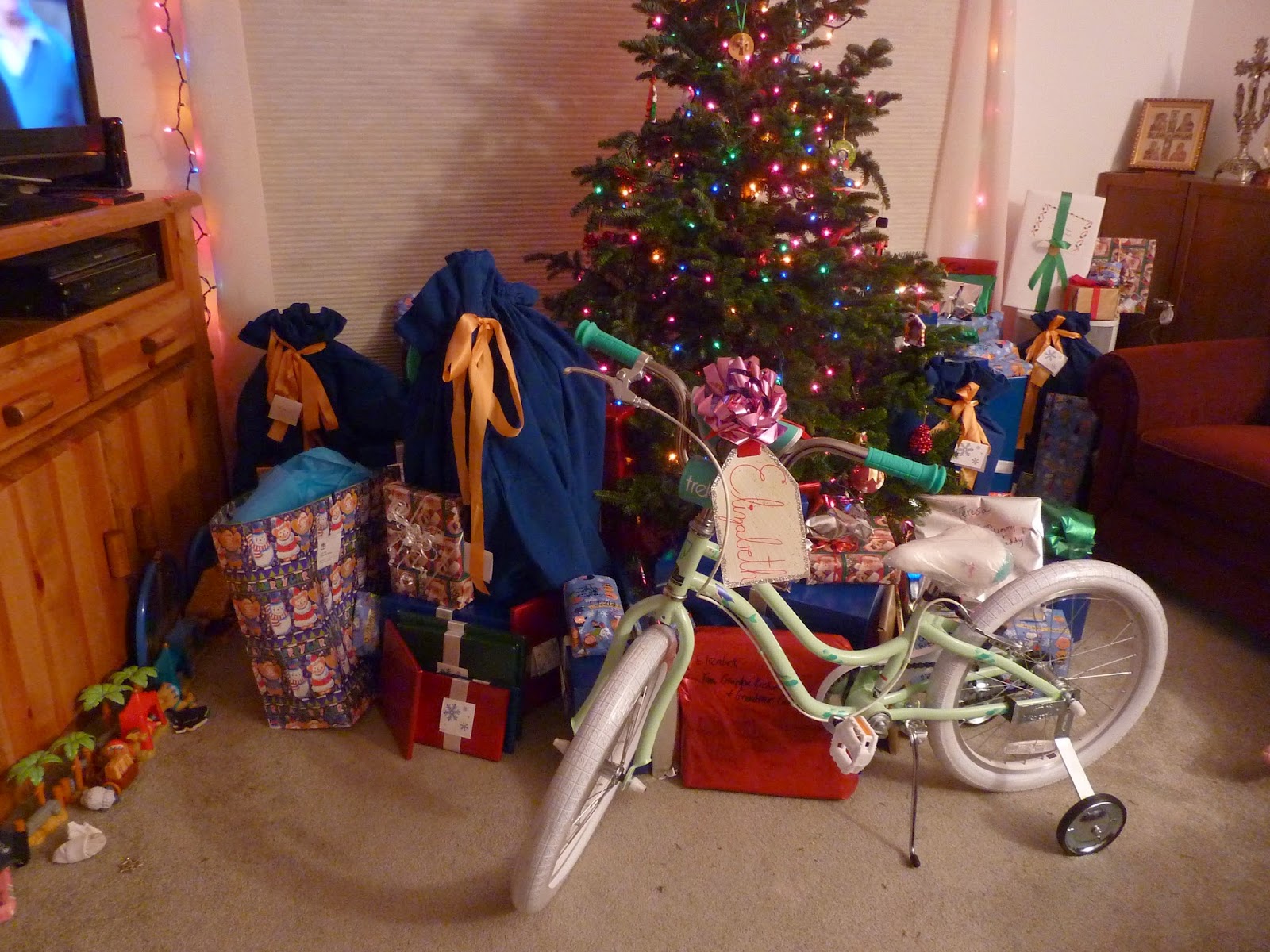 The kids kindly slept until 7 before getting us up. And happily Thomas kept sleeping getting more rest and leaving my arms free to take pictures and help Brigid. 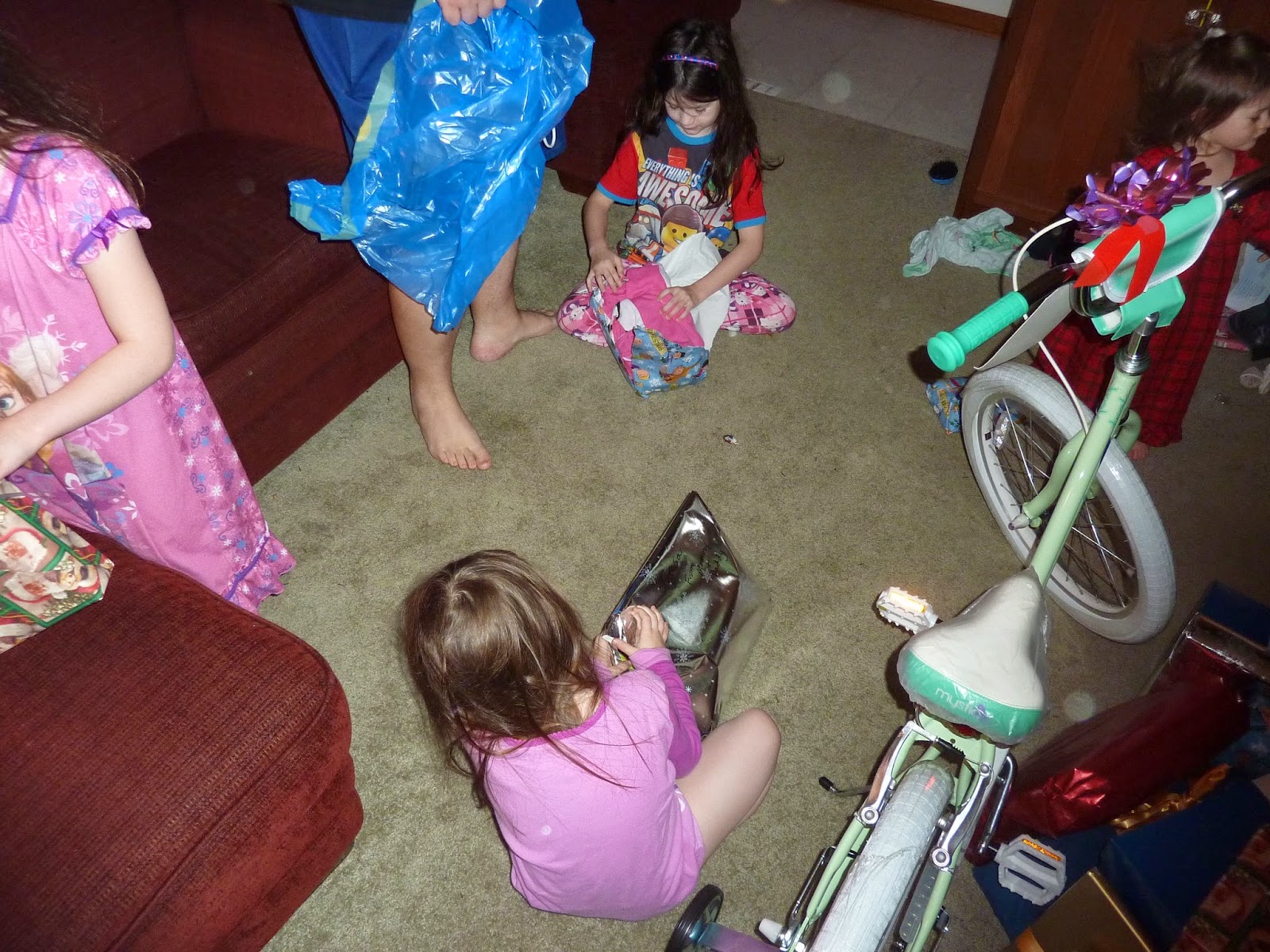 Elizabeth got some snow toys including a snow block maker and snow ball maker and inner tube for sledding. She got 3 sets of legos, a jewelry box, a few stuffed Puffles, a WiiU game, "The Bee Tree" book and I can't remember what else. 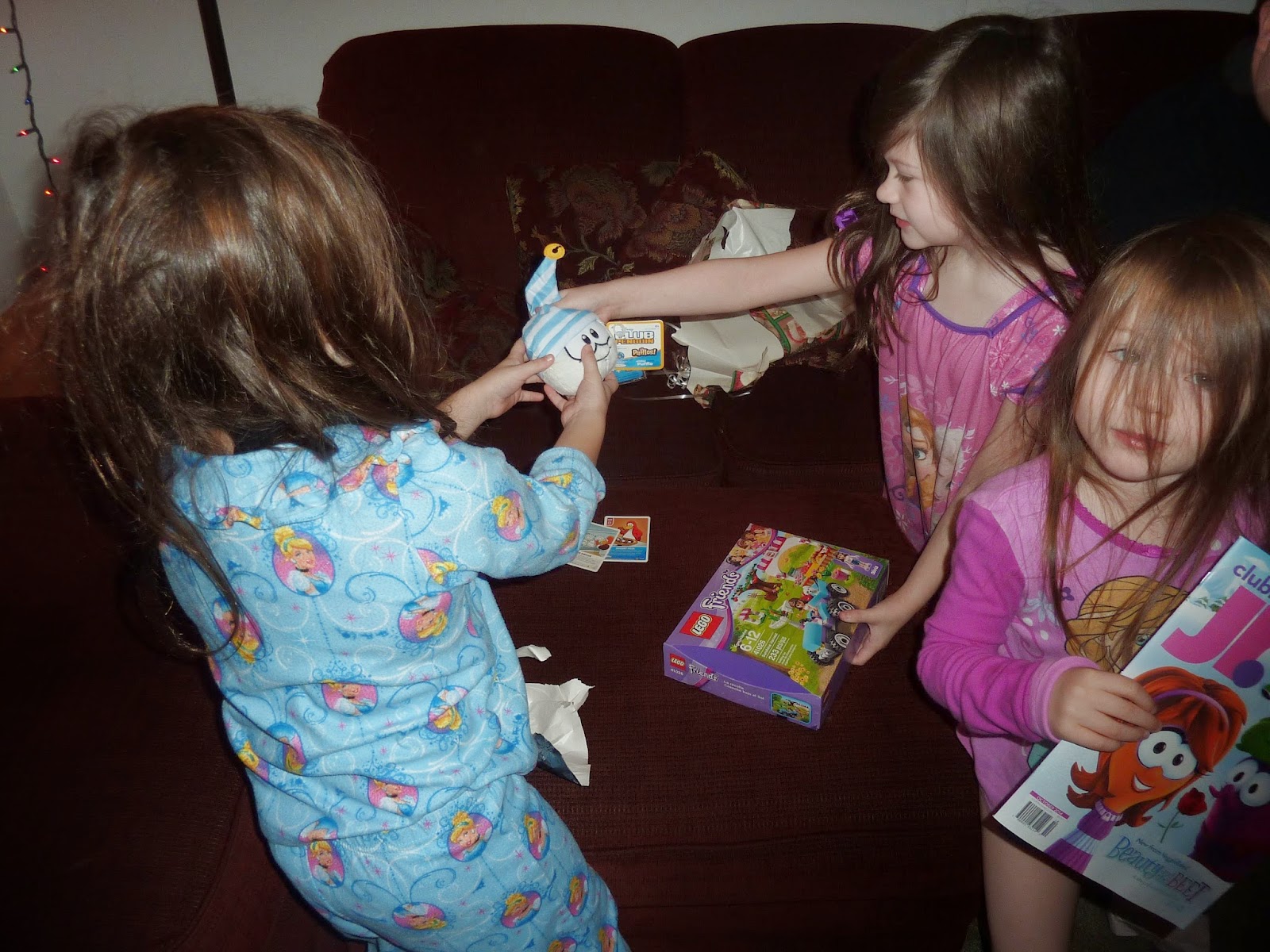 The girls got two gifts of remote controlled vehicles - one car and one pair of bumper cars - that they took turns playing with. Poor Brigid is terrified of them though, so she tends to either scale the furniture or insist I pick her up when they are on the move. 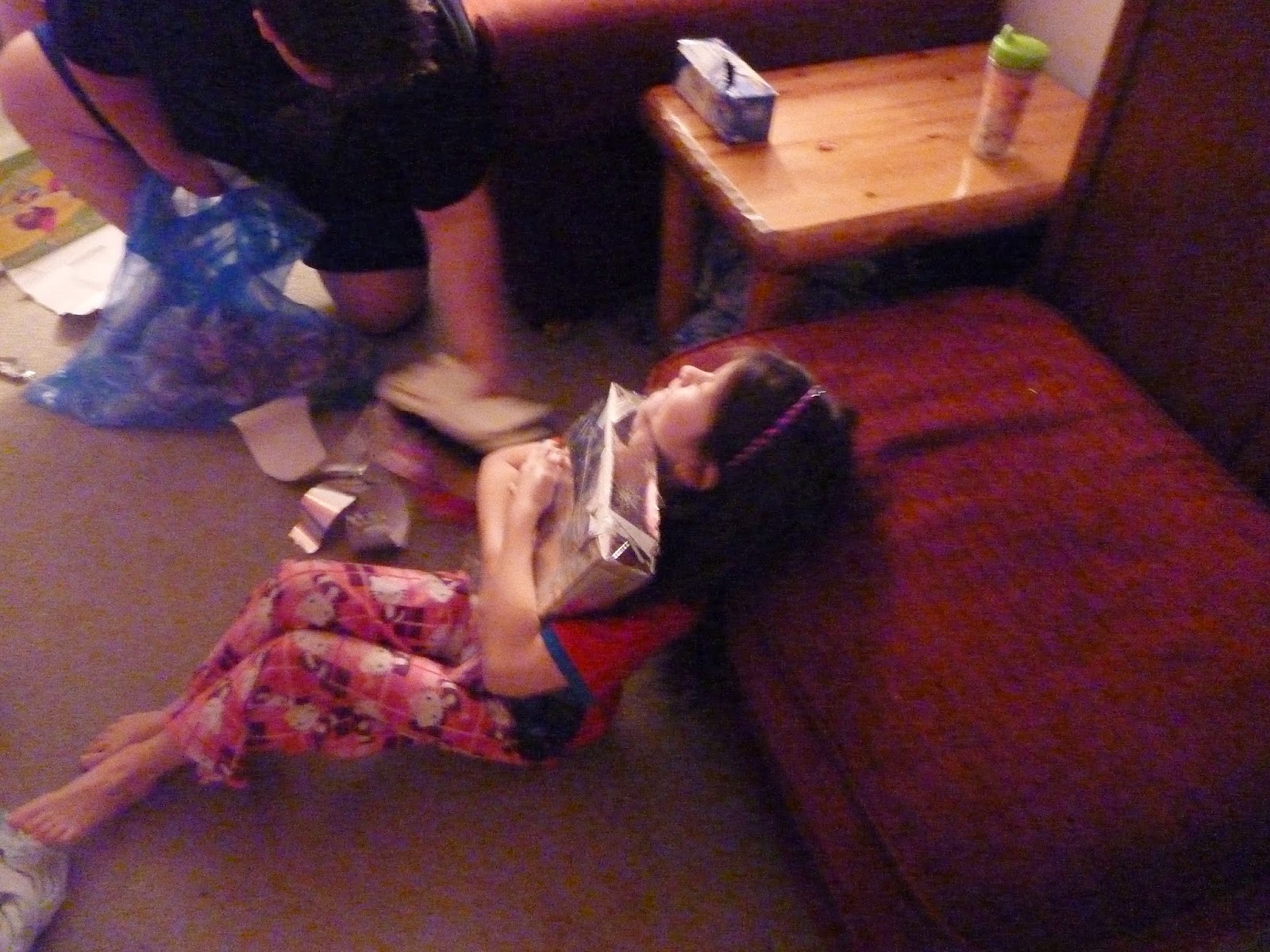 Cecilia's most desired gift was a harp, which she was ecstatic to get. She also loved her 2 lego sets, 3 Calvin and Hobbes books, 2 Magic Treehouse books, a jewelry box, two magic kits (which she has already been practicing), pajamas, a create-your-own-headband kit, etc. 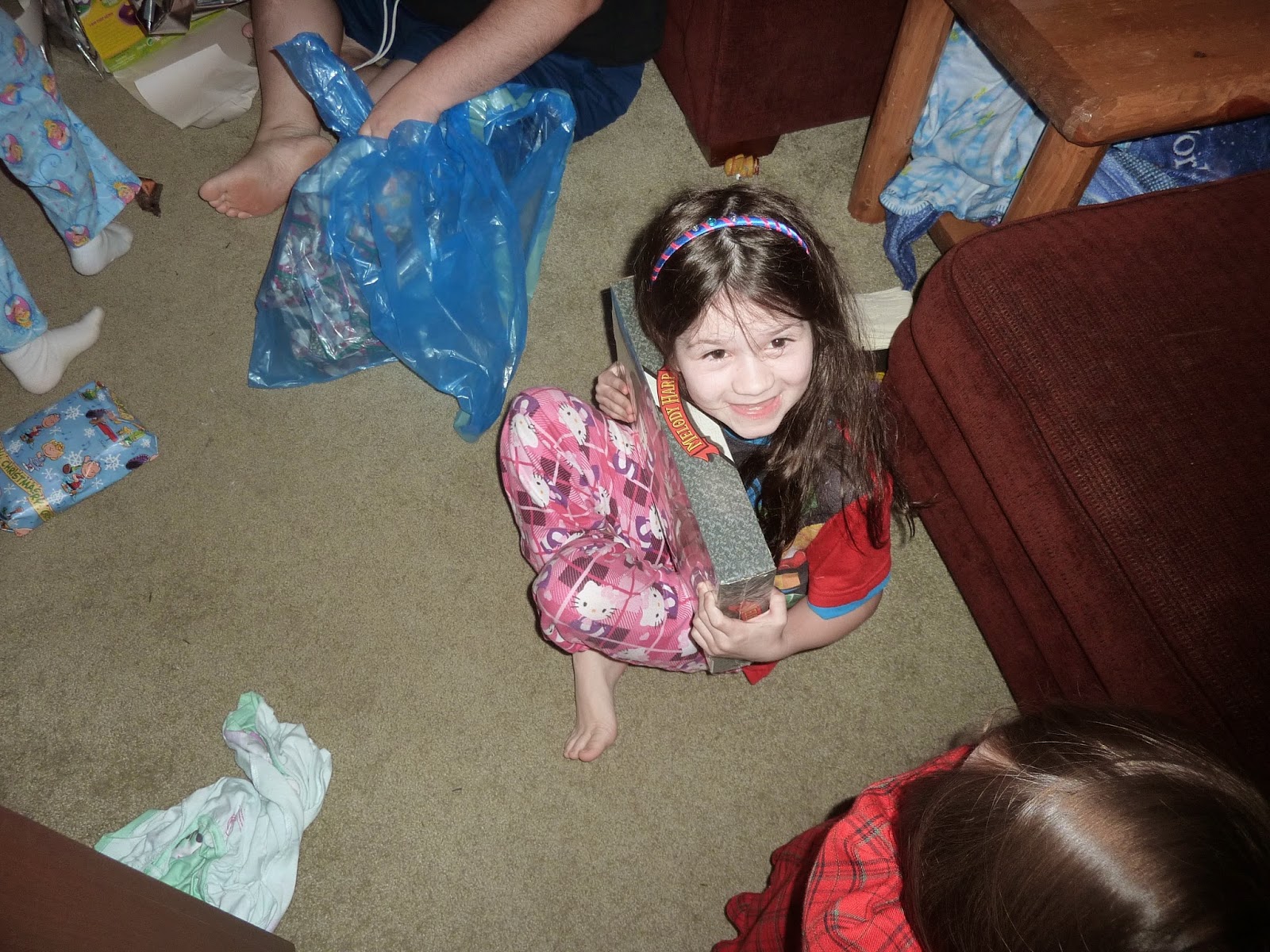 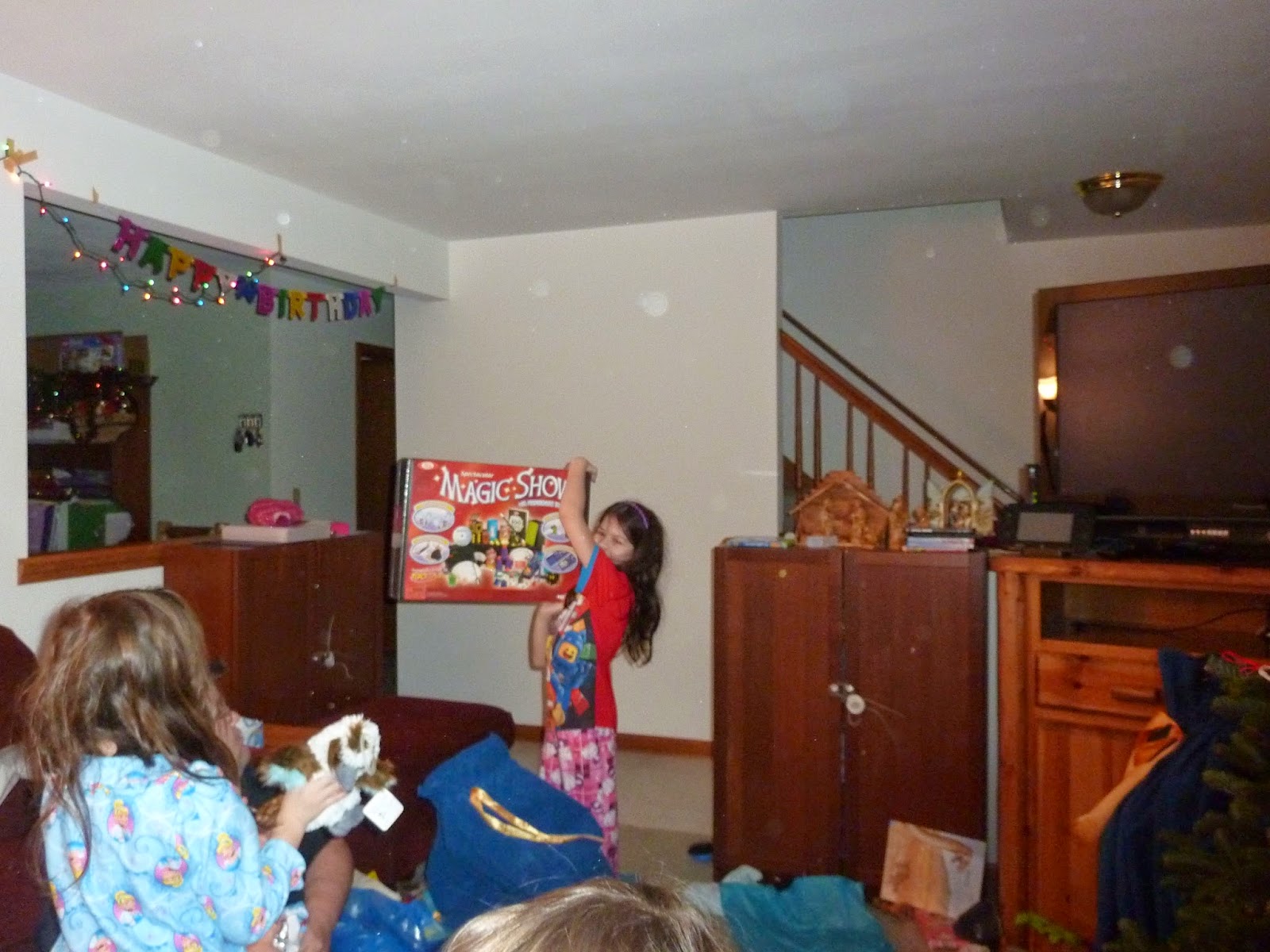 Each of the oldest 3 girls also got Club Penguin memberships, which they enjoy playing online with friends. 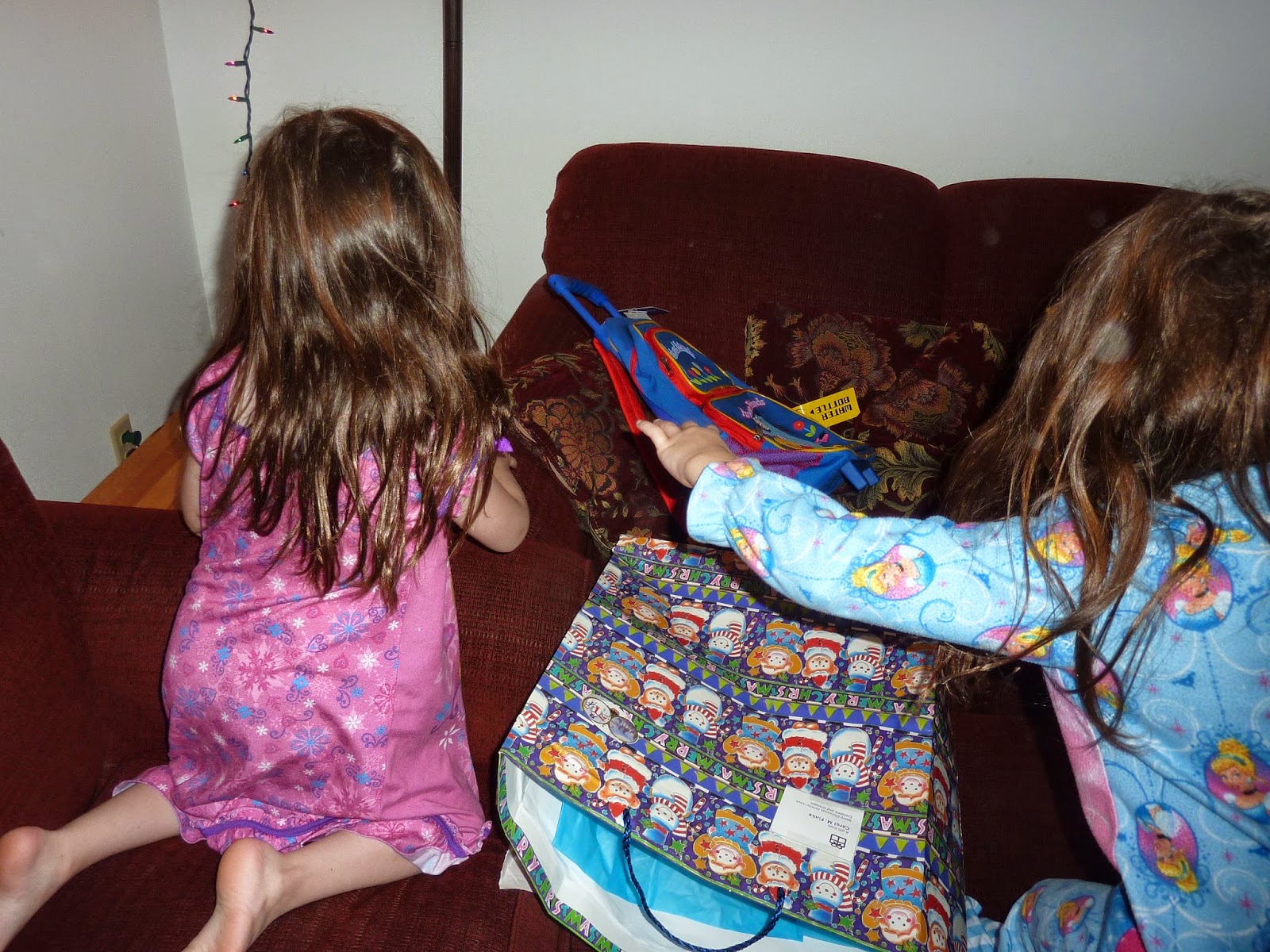 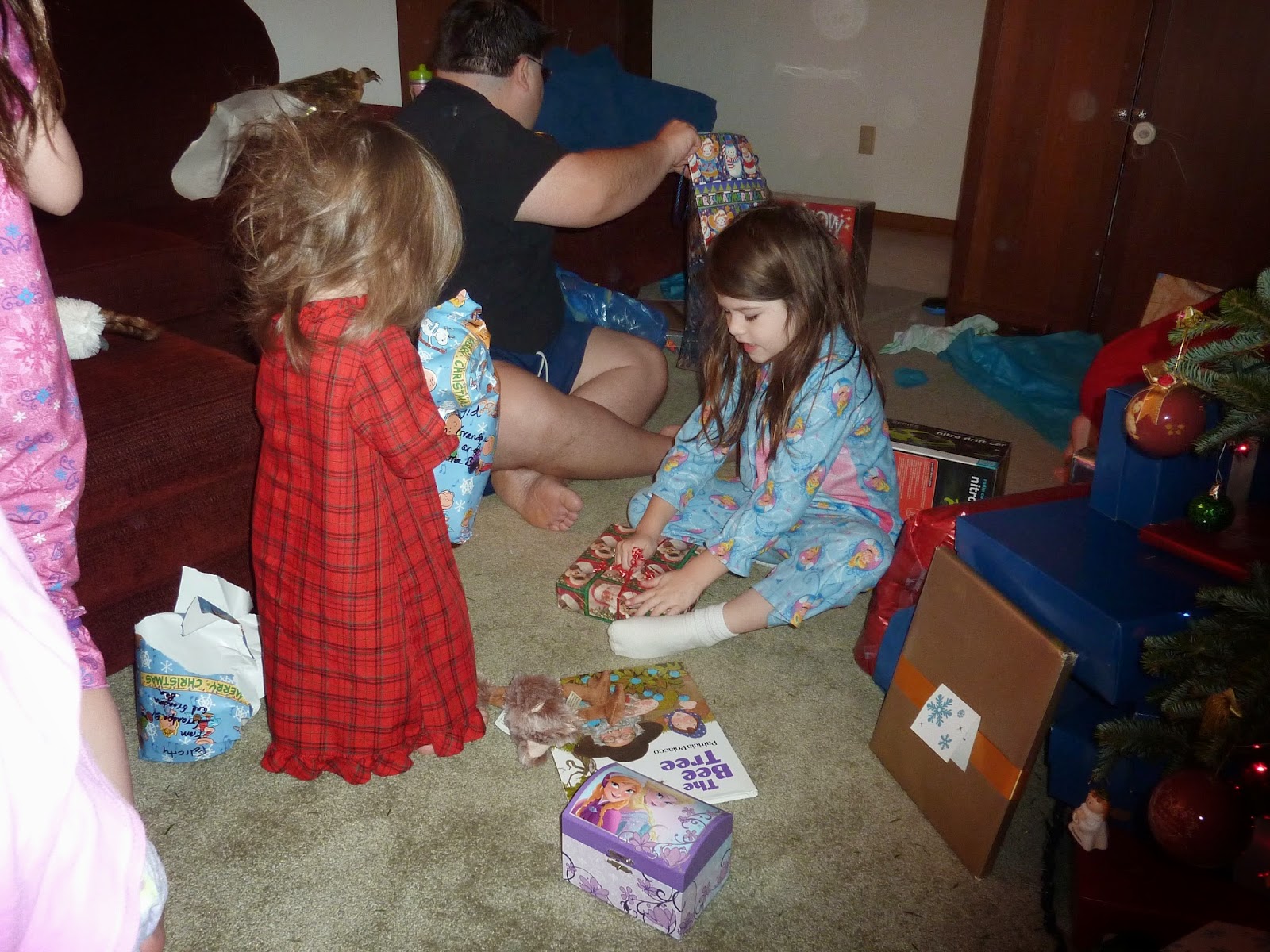 Teresa was so cute not being able to read but trying so hard to make sure she only opened her own presents. She would bring each one to me and ask if she could open it. 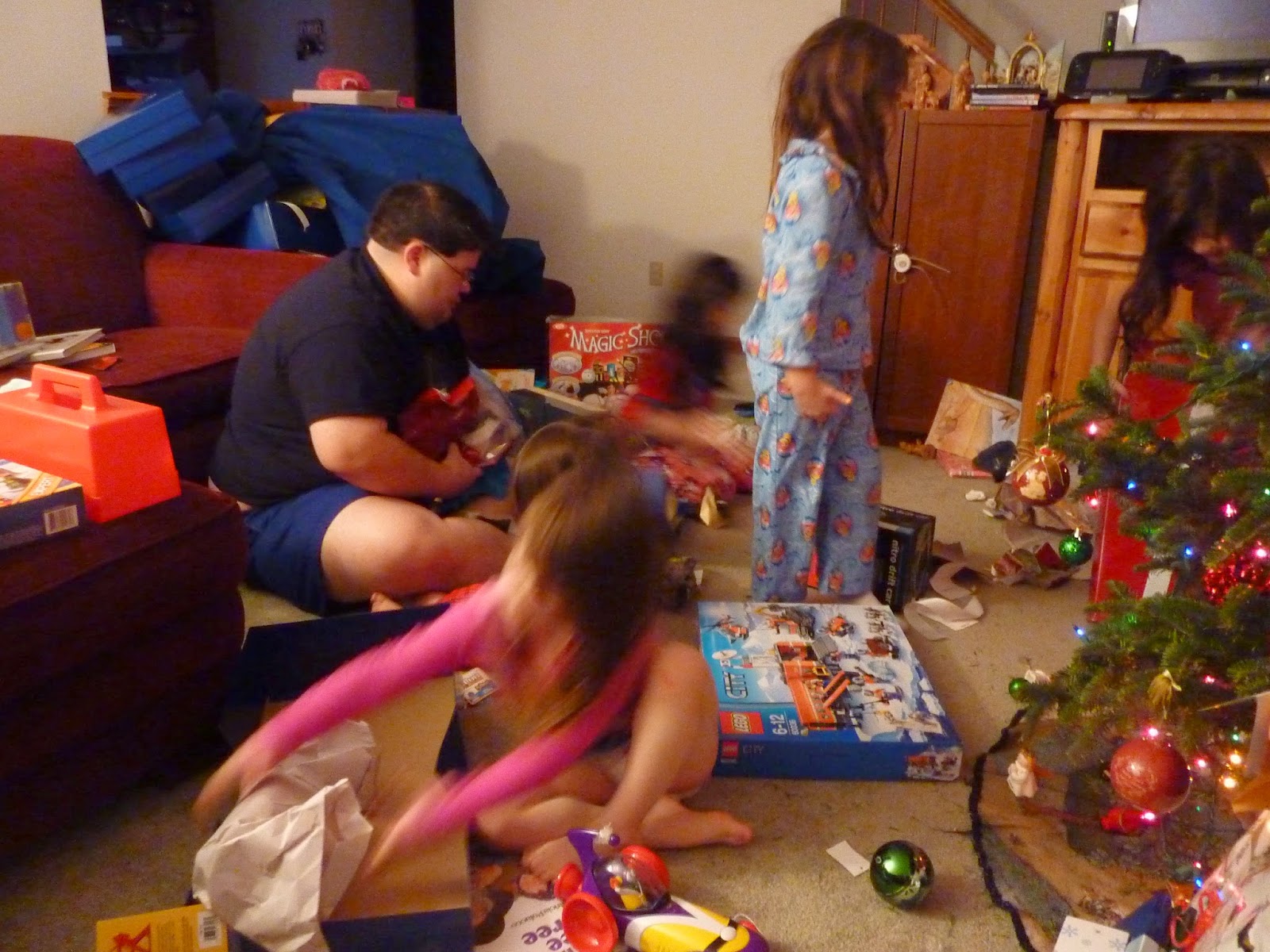 Teresa got a pre-school transformer of Optimus Prime, a puzzle and about half a dozen books, a stuffed penguin and stuffed giraffe (so she can stop stealing Elizabeth's penguin and Brigid's giraffe), a Larryboy car (to replace the broken one she has begged me to repair but I can't), a Shaun the Sheep DVD collection, the Chipmunk Adventure DVD to replace the one she wore out and won't play anymore, etc. 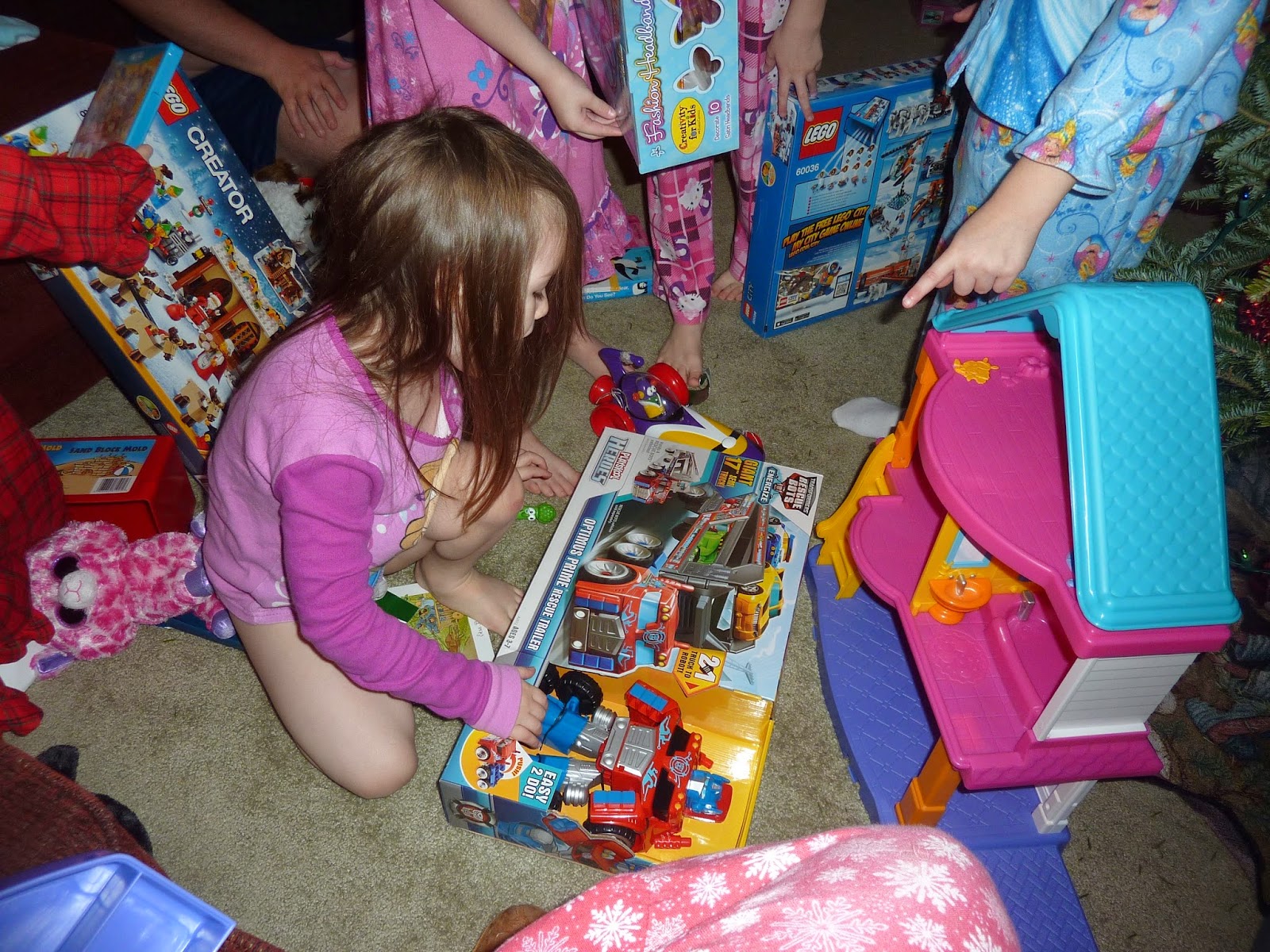 Brigid got a My Loving Family dollhouse with family and van, stuffed baby panda bear to join her beloved Pandy, her own iPod, warm Frozen footie pajamas (which is helpful as she only has 2 footed ones and she has a tendency to take off any pants and then gets cold), a puzzle, an open the flap Eric Carle book, new slippers and pajamas, etc. 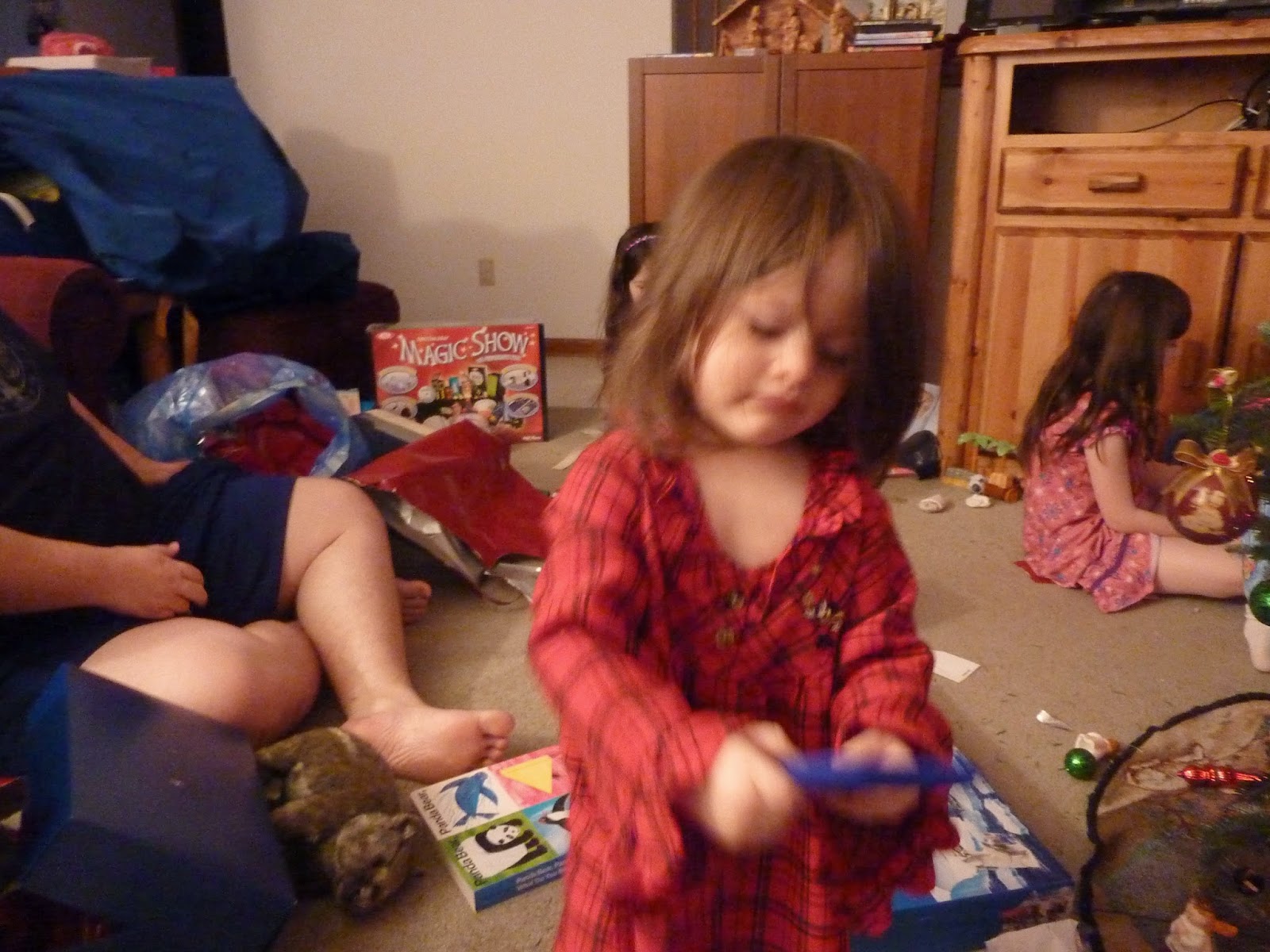 Thomas got his Baby's First Christmas ornament from Lenox, two wooden figures of his patron saints, a couple of outfits for when he gets bigger, and his personalized baby blanket. 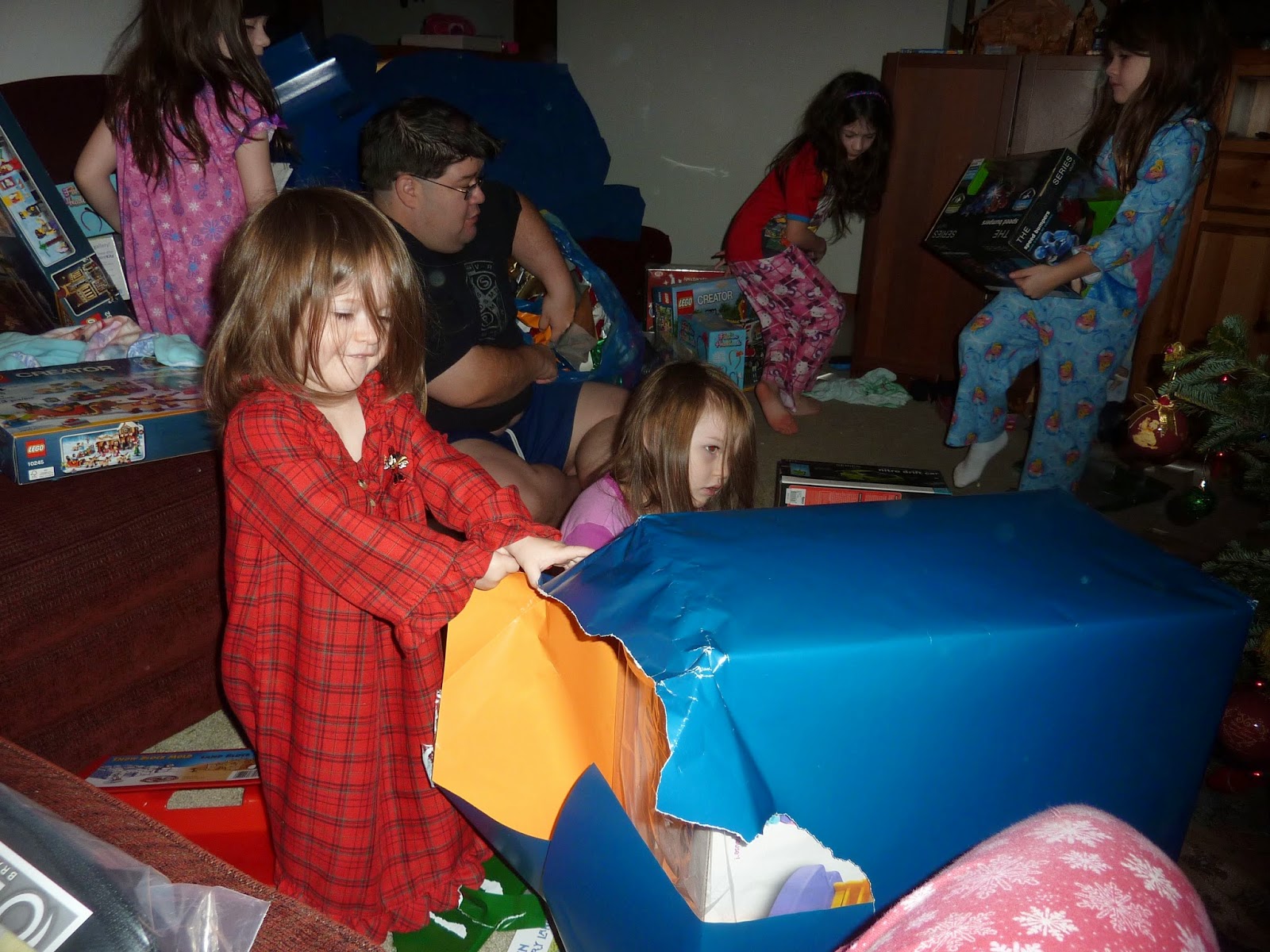 From my brother and his wife, each of the kids also got a stuffed animal of an animal unique to Australia or New Zealand. From a kookaburra to a kiwi, a platypus and an ostrich, I think we may need to watch Dot and the Kangaroo again soon. A couple are hand puppets and a few make the noise of the animal. The kiwi is adorable but I love the sound of the kookaburra! 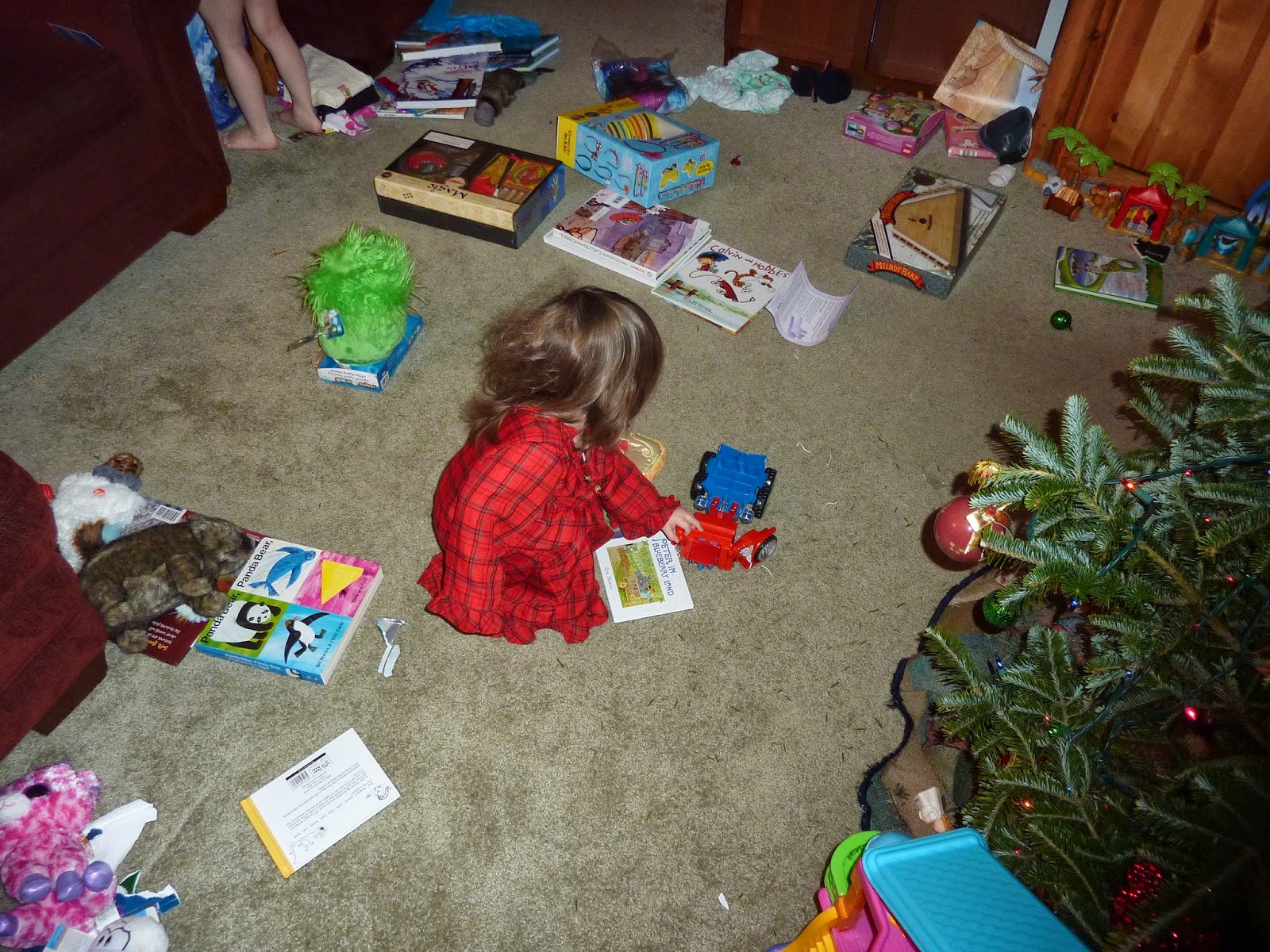 James got a Sony PS4 and a couple of games, which should make his exercise time more fun, as well as a few ties. 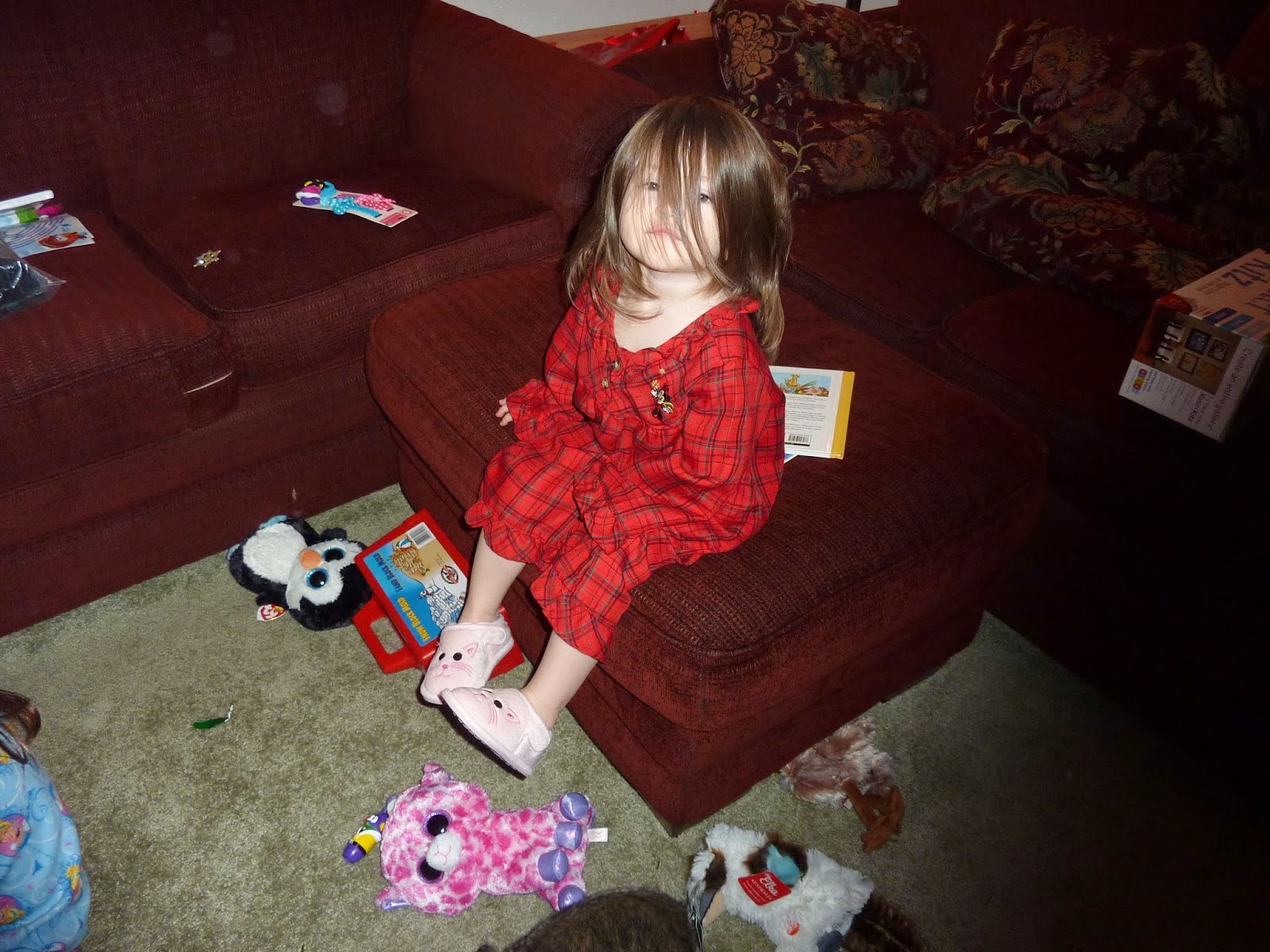 Mommy got a new computer, which is very nice since my previous one would occasionally shut down at random and had gotten deplorably slow. The picture on the box just gave me an extra reason to save it. 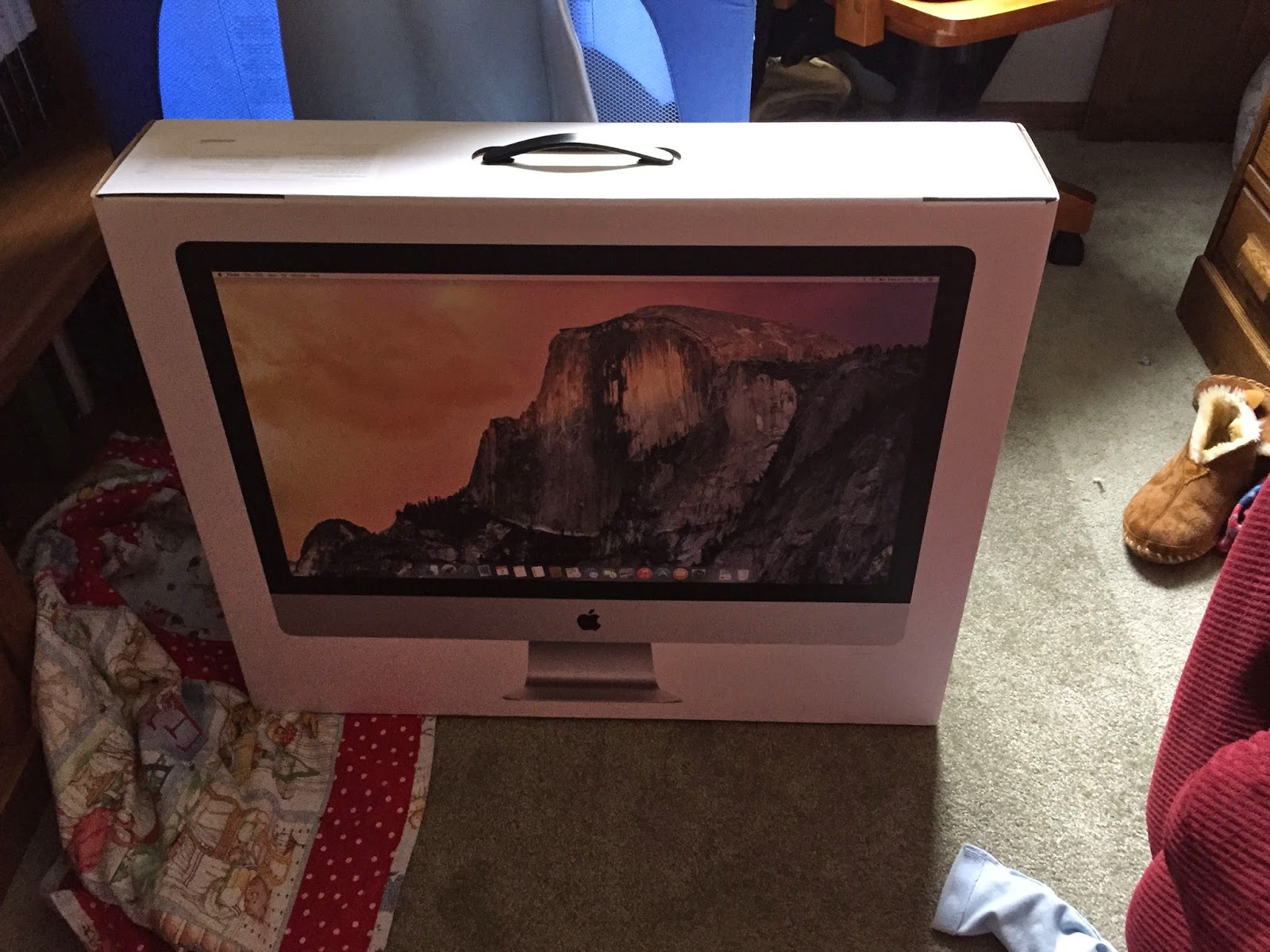 I also got 6 bags of my favorite Mystic Monk tea from those awesome Carmelites in Wyoming. I wouldn't have to stock up so much at Christmas if they would sell my Holly and the Ivy tea all year. :) 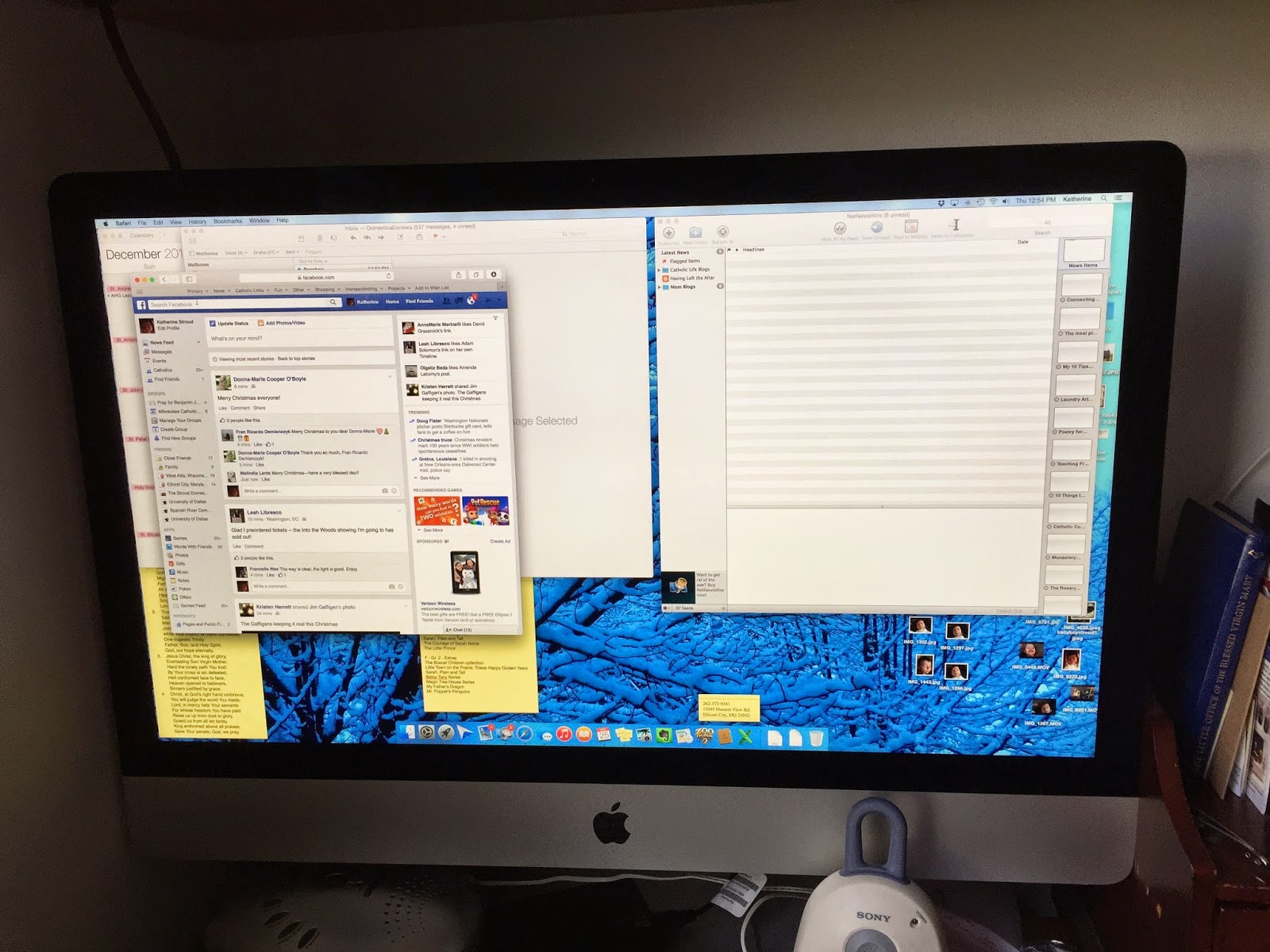 So, after a delicious ham lunch with mashed potatoes, corn, applesauce, green bean casserole, crescent rolls, we spent the afternoon hanging out, putting away new clothes, putting together legos, setting up electronics and just taking it east.