(On Sunday evening, Cecilia went out front and teased Brigid by throwing snowballs at the window directly in front of her. Brigid thought it was hysterical.) 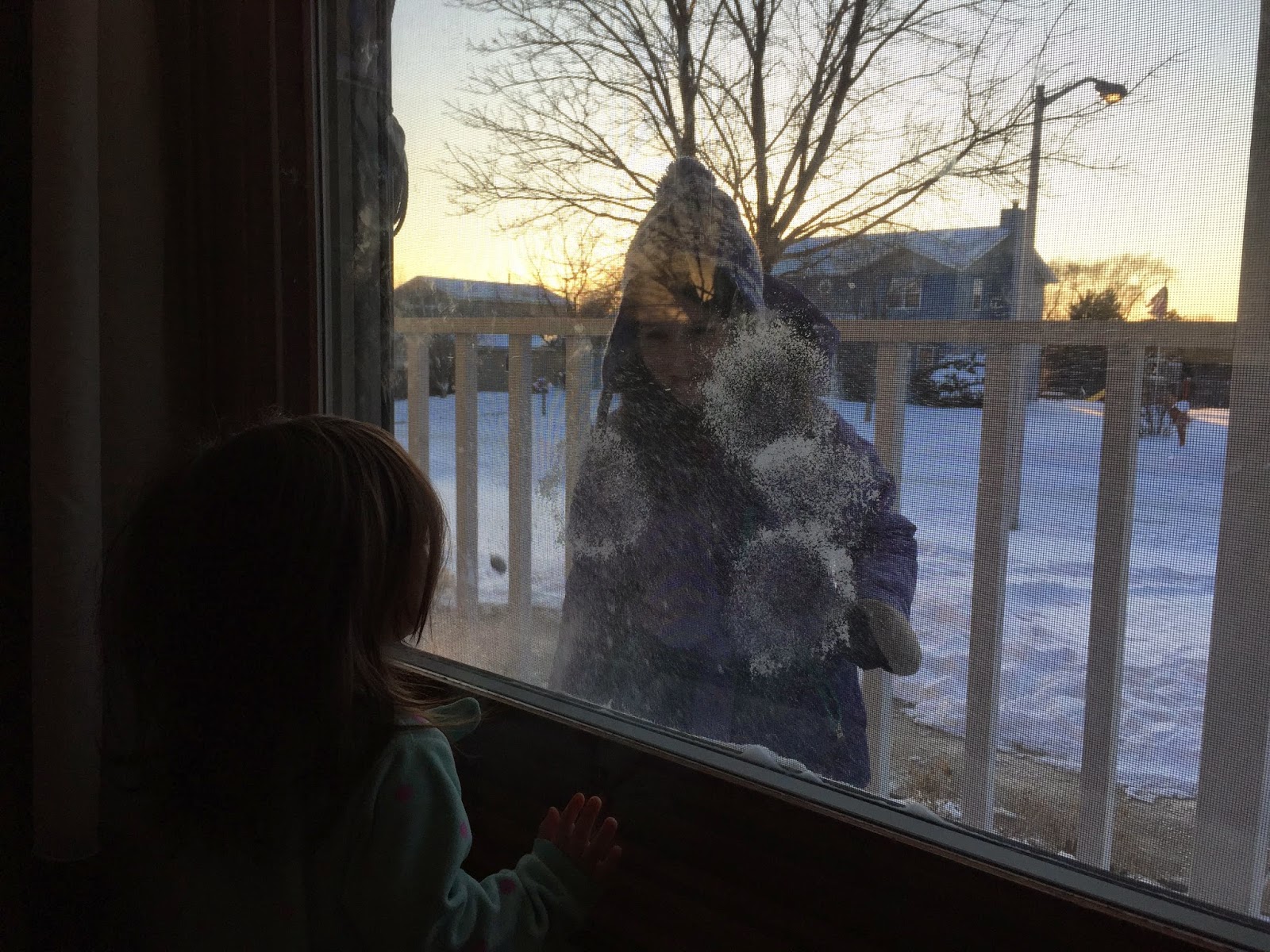 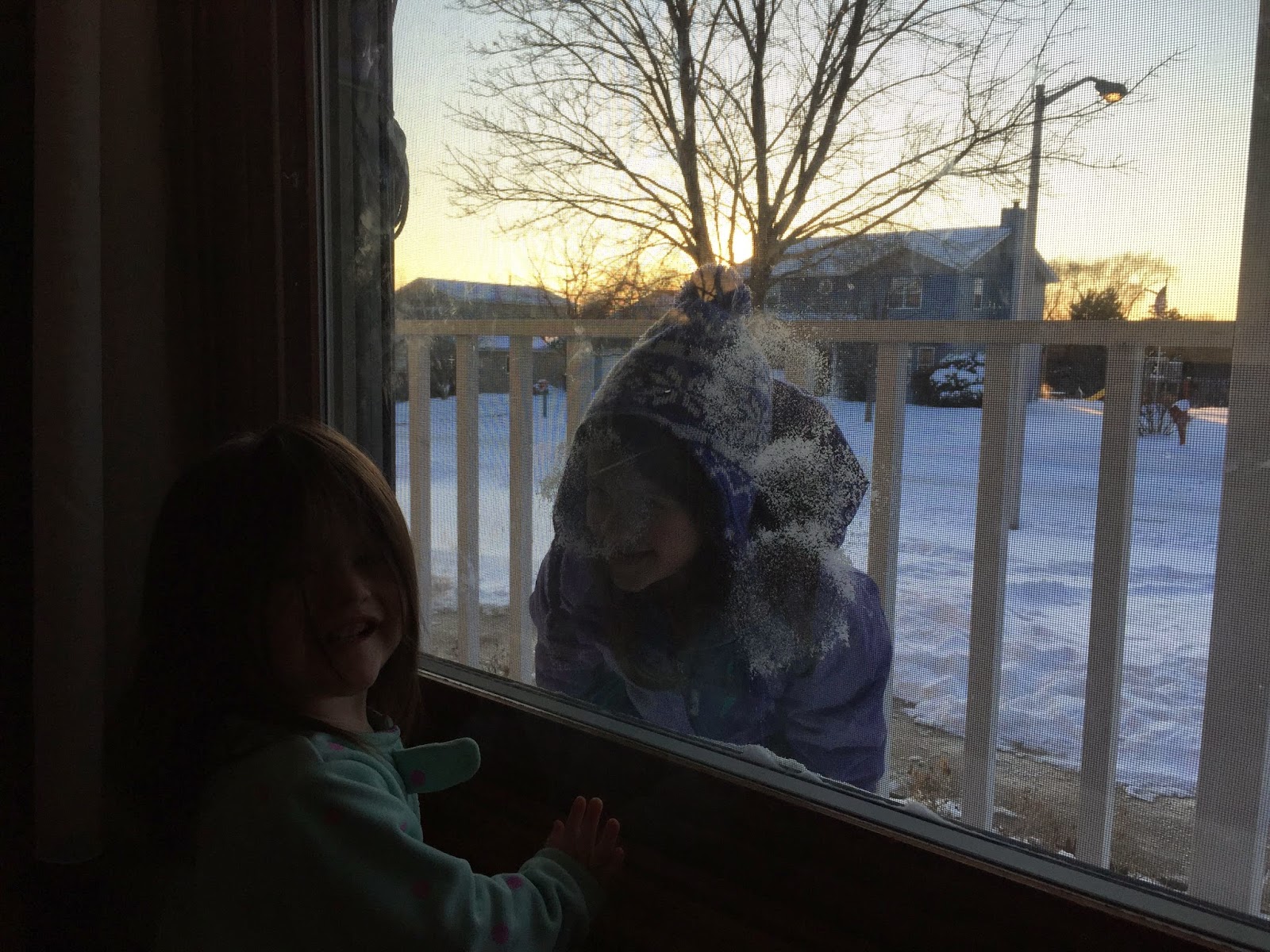 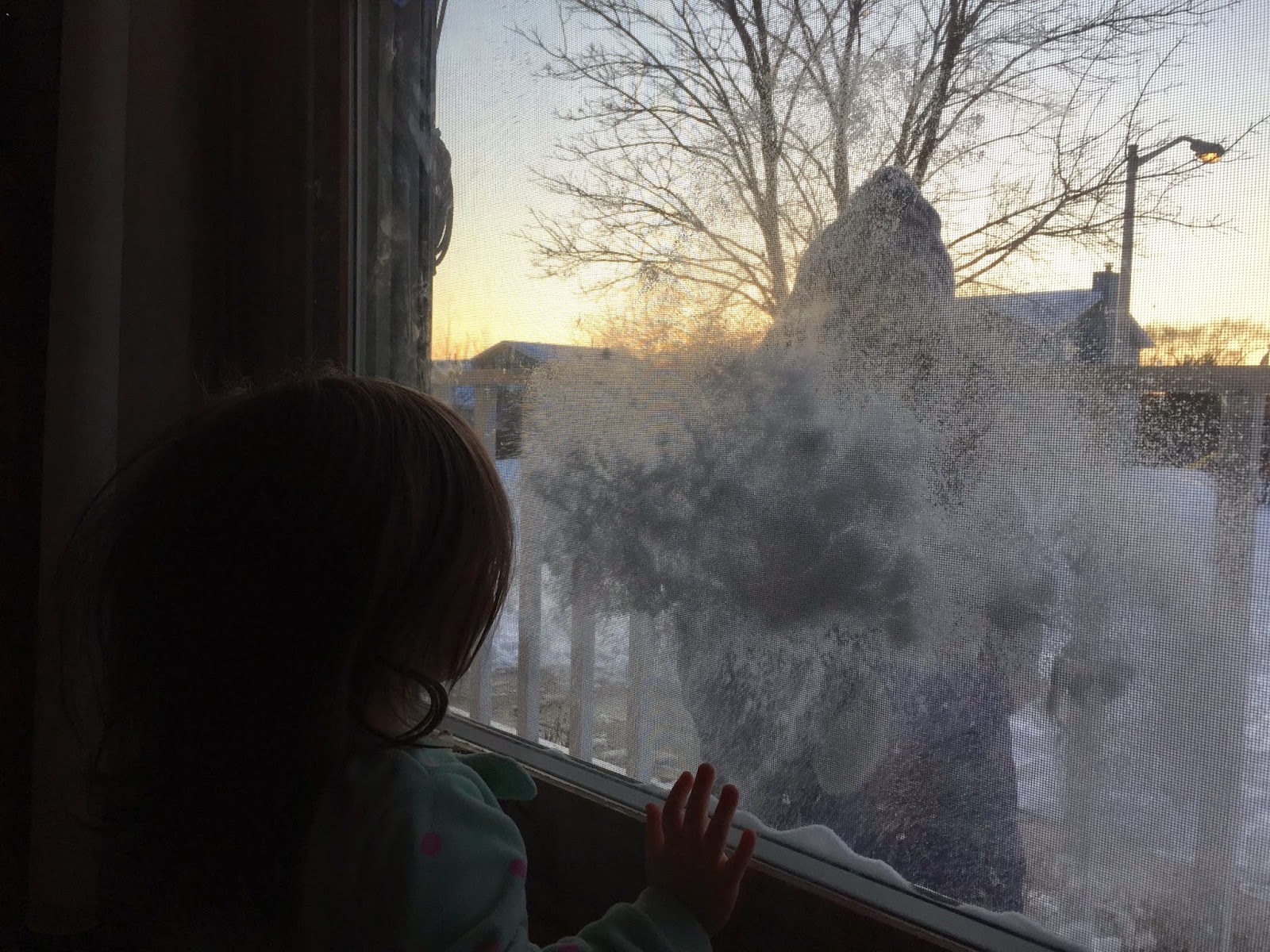 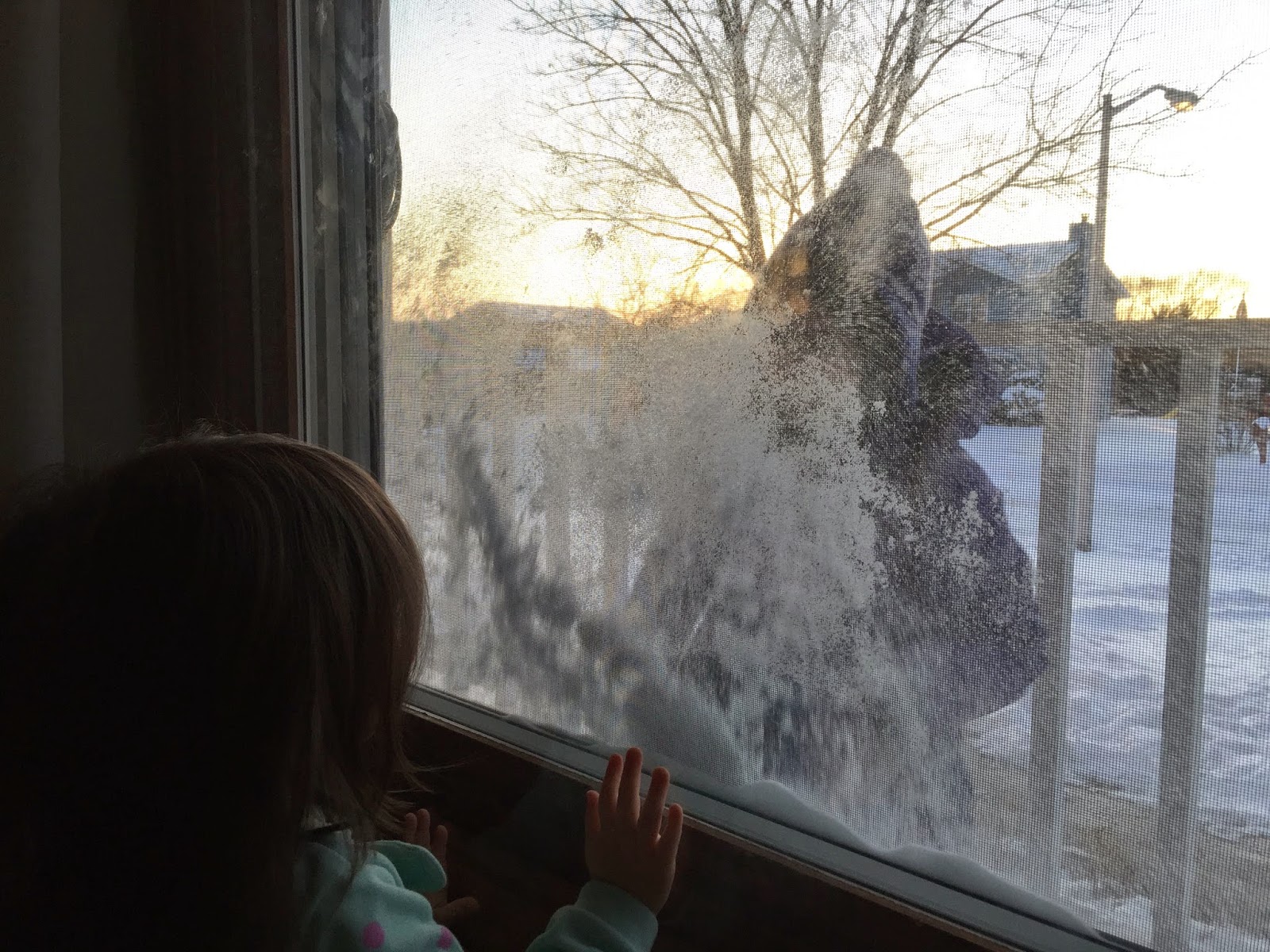 My mornings have become a bit crazy.

Generally speaking, Teresa gets up around 6:15 or 6:30 and immediately wants breakfast. Only after I've made her breakfast do Cecilia, Felicity and Elizabeth begin appearing, one at a time. I then fix their breakfasts. When they are done eating, Teresa generally wants any extra beverages they haven't finished. Thomas gets up around 7, so I run upstairs and get him, change his diaper and nurse him. Then he gets tummy time and I usually try to eat my breakfast at this point. Then I need to get Brigid up at 8 and get her breakfast, which she usually likes to eat along side any leftovers from the other girls. Occasionally Teresa will see Brigid eating and come back asking for a second breakfast. Basically, breakfast has become this rolling, non-stop enterprise almost every morning. It is a bit tiring and takes a while. 6 breakfasts (not including my own), 3 diapers and at least two trips up and down stairs. And that is assuming I'm not starting any laundry that morning.

Today we were starting something new. I signed up the oldest three girls for a local, Catholic, homeschooling gym class. Generally speaking, I don't think my kids are lacking in exercise at all, but this class is supposed to teach them how to play basketball, how to play volleyball, how to play soccer, etc. It should also help them meet and become friends with some of the other local Catholic homeschooling kids. And I get to chat and meet their moms while they are in class. There are 12 classes and the whole thing cost a total of $30. Nice huh? On class days though, we do need to leave the house by 8:30, so they each got one relatively easy thing done before we left. Cecilia and Elizabeth did their Geography and Felicity did her handwriting.

The gym class went well. All three girls enjoyed it and I met several moms, a couple familiar, most not, and practiced putting names with faces.

On the way home I picked up Burger King and we had an early lunch. I don't know that we would pick up something after every gym class but Cecilia's stomach was a bit touch and go this morning and she was starving by the time we left and I know from experience that getting her something to eat is the best way to avoid vomit.

After lunch all five girls went out front for sledding, snow angels, snowballs, and fun. 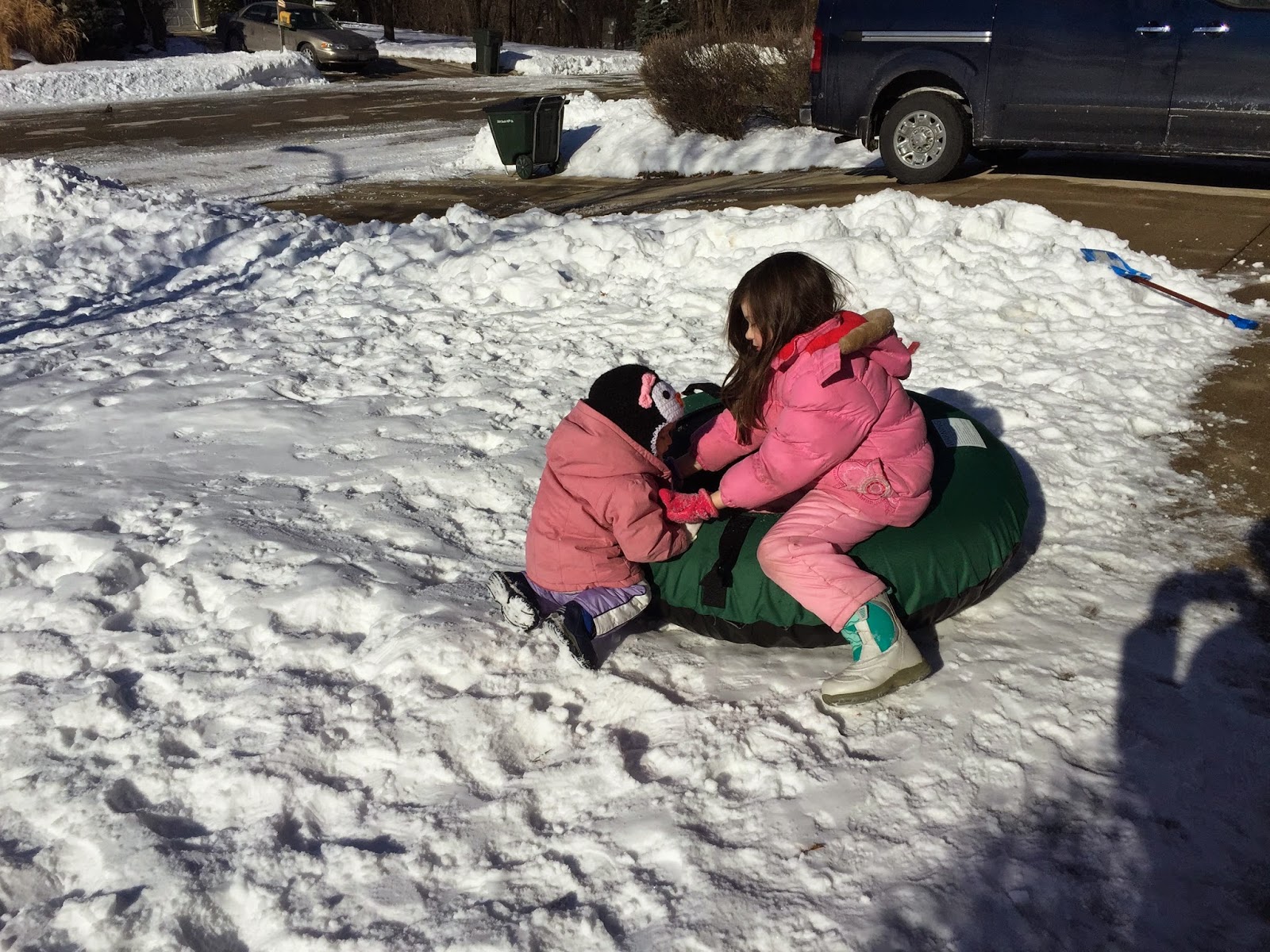 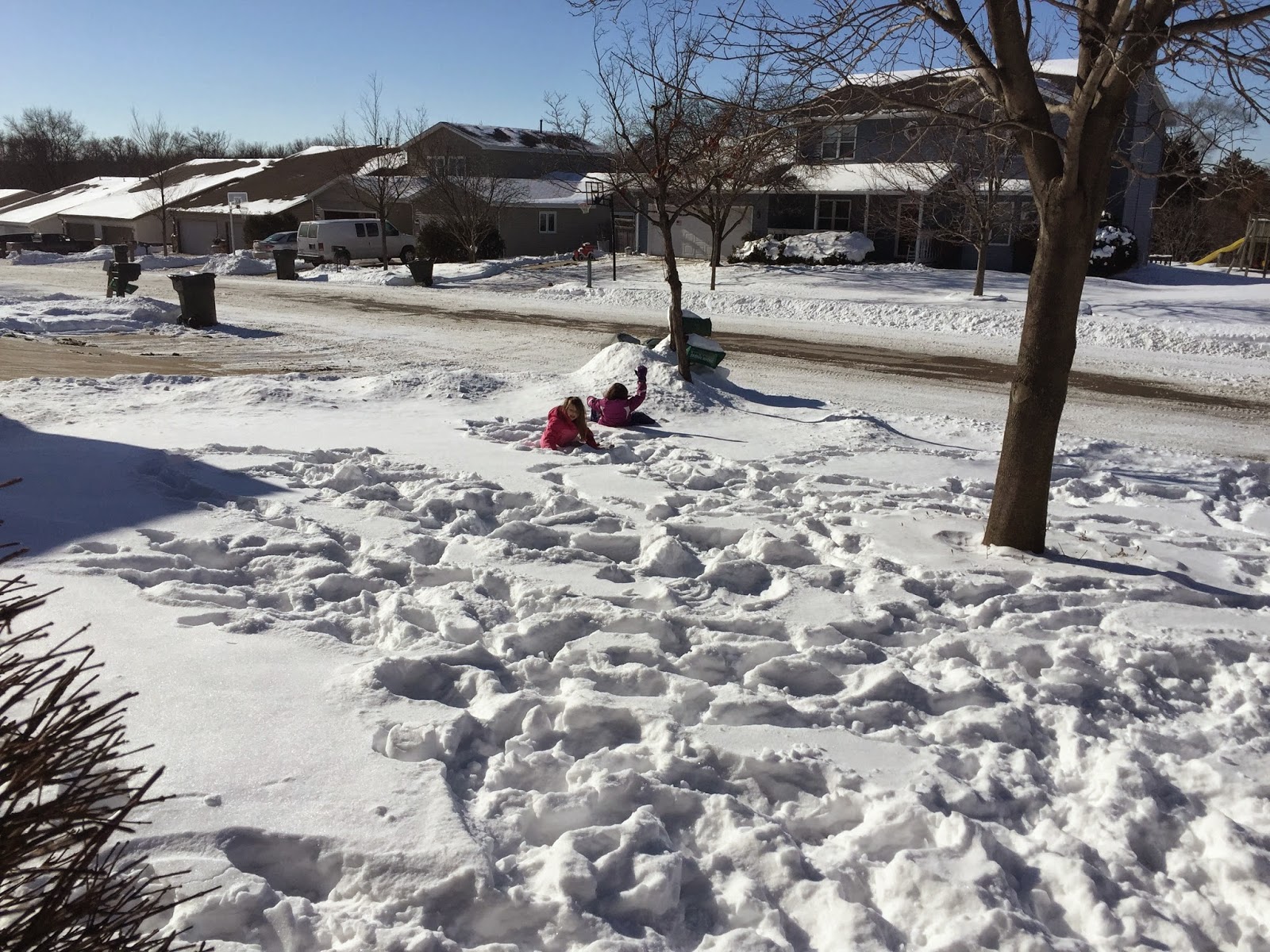 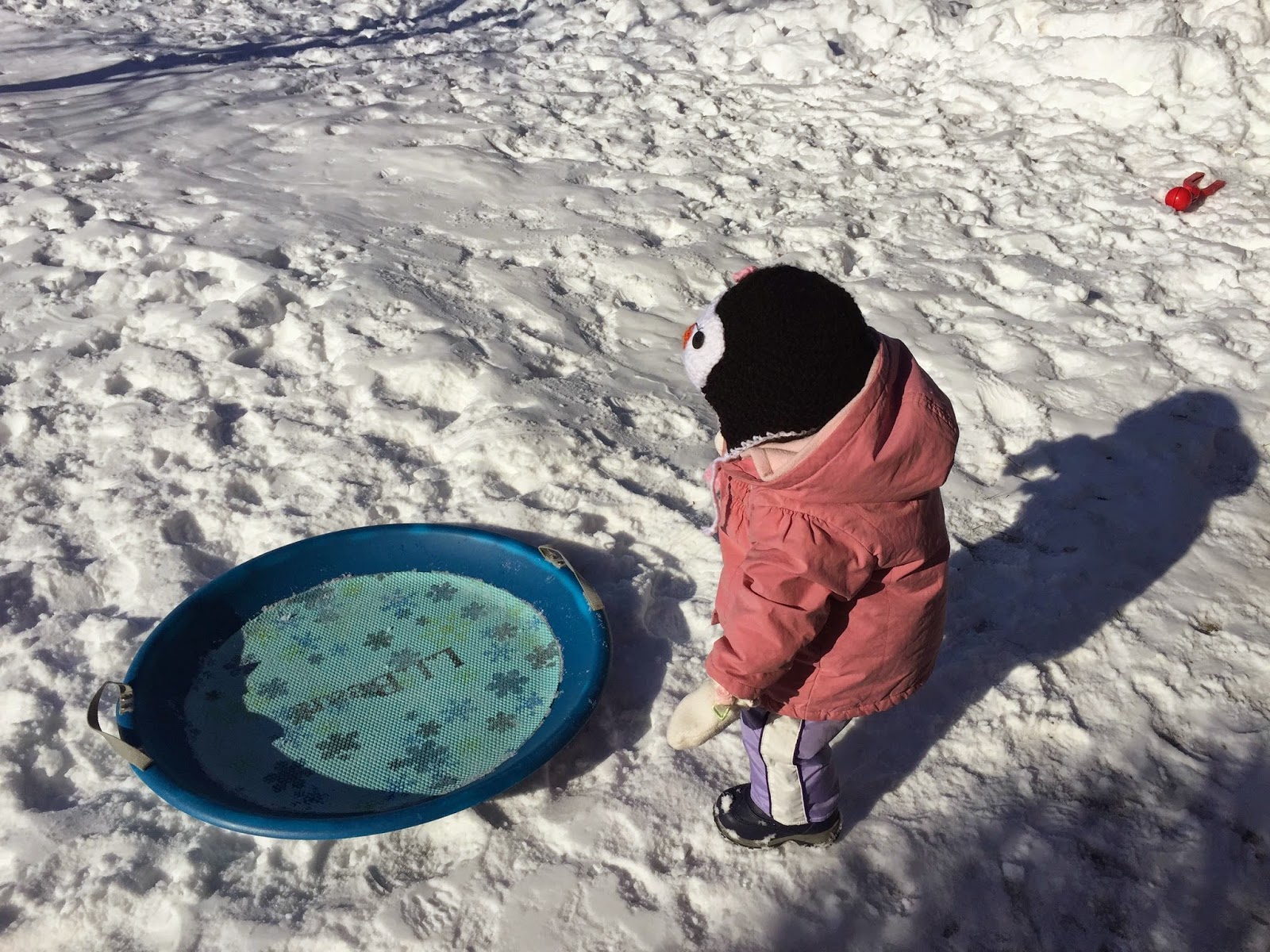 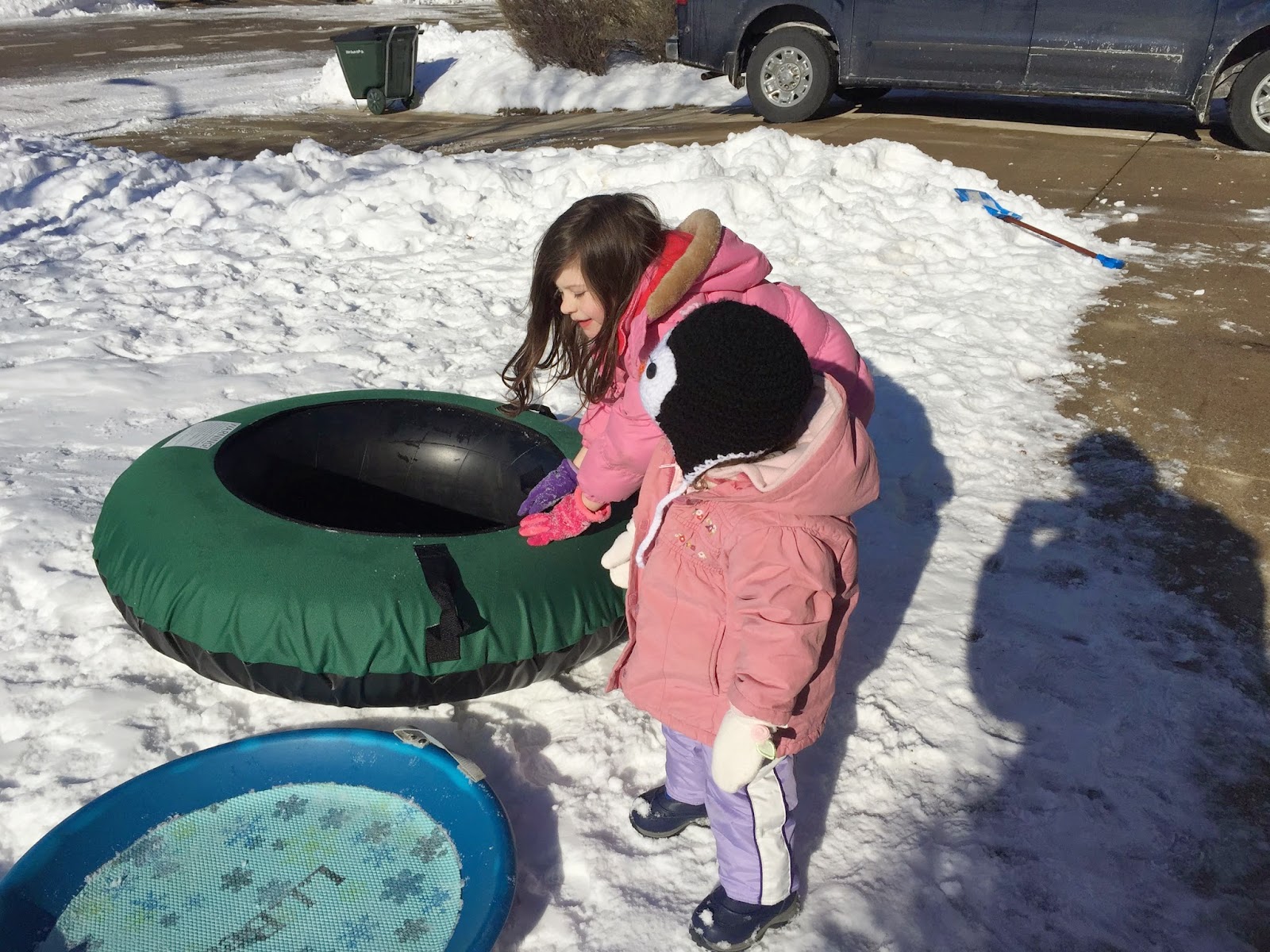 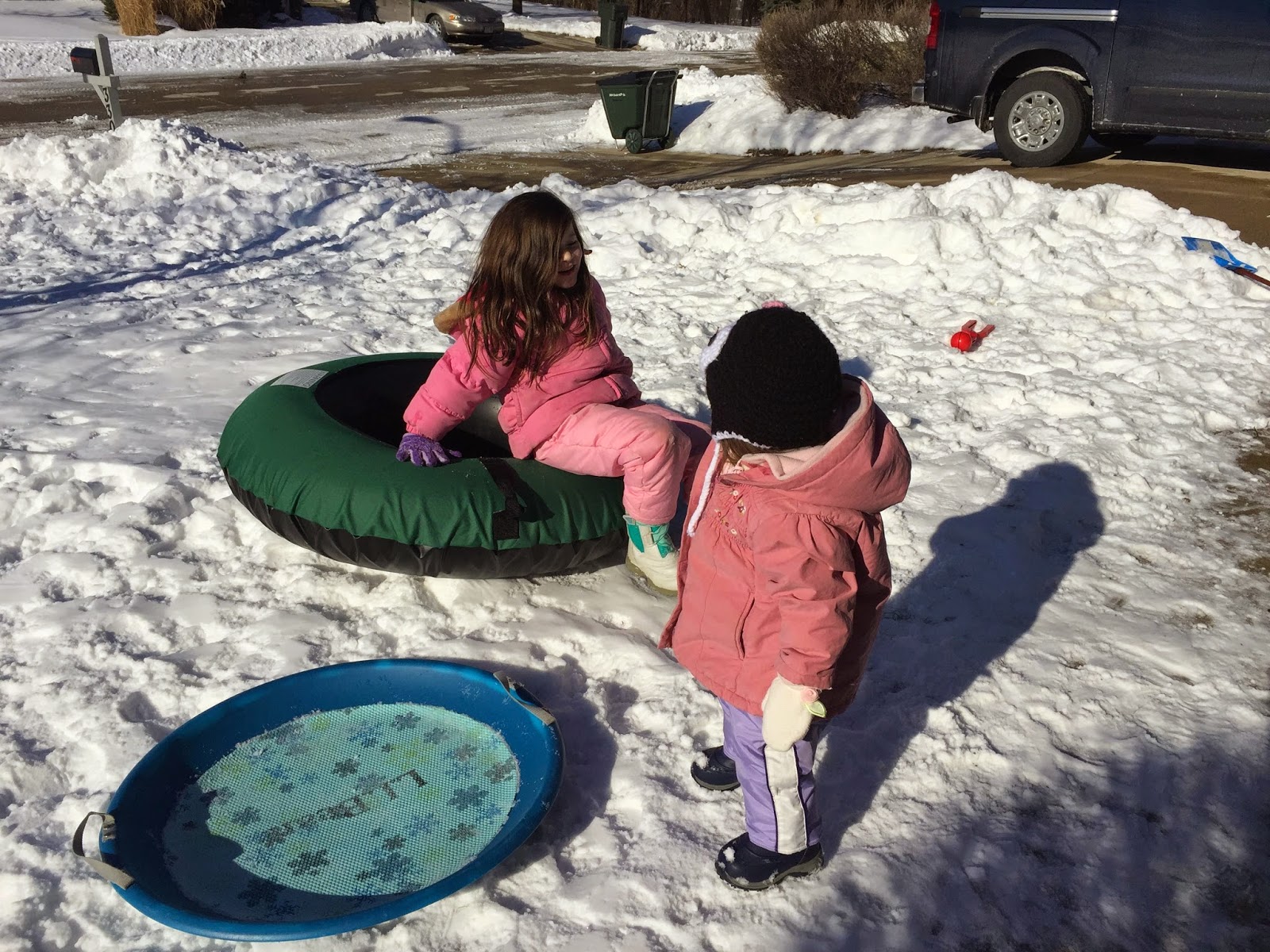 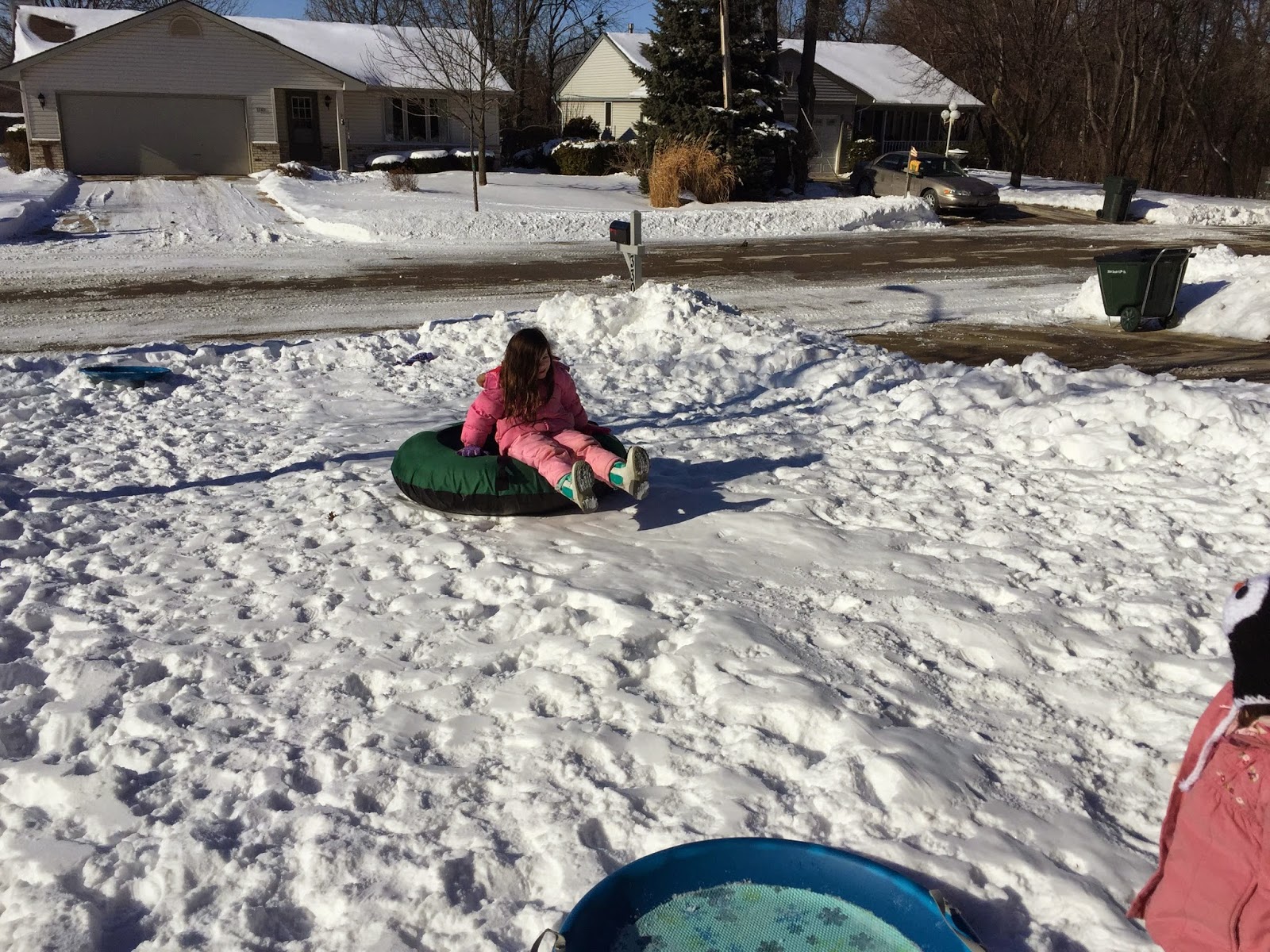 Once I had Brigid and Thomas down for their naps, we sat down and did some History. We read about Black Tuesday and the great Stock Market Crash and the Great Depression. And we read a bit about how the Great Depression effected Europe and in particular Germany and encouraged the rise to power of Adolf Hitler.

Then they had blue raspberry snow cones followed by Cecilia's sorting of the laundry and picking up the living room while Felicity and Elizabeth went sledding some more and then picked up the playroom.

This morning school was delayed about an hour due to snow. Playing in it that is. The girls have been having a blast playing in the snow and they wanted back outside right after breakfast. All five of them. So we delayed school a bit so they could enjoy some winter fun.


Afterwards, Elizabeth did a page in her handwriting, 2 pages in math and two pages in English learning what an action verb is. Cecilia did her spelling, one math lesson, and wrote a letter for her handwriting for the week. Felicity did her geography and 2 pages in math. Teresa and Brigid colored, played, and watched a Muppets version of The Frog Prince while Thomas took an impressive 3 hour nap.

After lunch I spent time sorting through dentist recommendations and making phone calls trying to set up cleaning appointments, since all of us are due for cleanings and I just couldn't deal with it last Fall. I also called mine and the girls' previous dentists to request the transference of our files. The whole penance took about two hours.

This morning did not go well. Sometimes I find it difficult to juggle everything and this morning was one of those mornings. When Teresa wants me to inflate a toy ladybug to ride on and Brigid is crying for me to hold her all morning and Thomas doesn't manage to nap a solid hour at a time and three girls are each asking me three different math questions at the same time it can become a bit much.

Honestly, I spent the afternoon just recovering from the chaotic morning. But Felicity finished reading The Black Cauldron.

Today got off to a much better start, partially because James was home to help get the morning going and partially because I finally realized one of the reasons our mornings were such chaos is that I was still starting school at 8:30 and with the rolling way our mornings have been going, I simply didn't have enough time before we began school and I bumped school back to 9am. When you are juggling feeding, changing, etc. 6 people for almost 2 solid hours and don't even eat breakfast let alone a break yourself before jumping into school work, it is a recipe for stress. We also took a couple more breaks to help ease things. Cecilia finished both of her remaining math lessons, Felicity did a couple more pages in math and her spelling and Elizabeth finished her math for the week.

Felicity finished her math for the week. And I sat down with Cecilia to work on her crystal growing kit with her only to discover I needed distilled water, which I didn't have, so that got put on hold, unfortunately. We cleaned up some and the kids played, some of which was video games.

This week wasn't easy. Coming off 3 days playing single parent while James was at a conference to leap into our first week back in school after a long break overwhelmed me. The kids were not used to less screen time and more structure and I wasn't rested at all to deal with their adjustment. By Friday I was tired and emotionally unstable. Taking Friday off was definitely helpful. Part of my difficulty is that Brigid has become exceptionally attached to me. As in, some days she wants to sit on my lap or have me hold her as long as she is conscious. Hopefully next week will be better.

Posted by Katherine at 1:00 PM