I was so busy last week that I never wrote a Learning Notes post. And I know from experience that if I don't write them as the week progresses, I forget things and mix up days in my head. So I am going to summarize last week and this week together so pardon me that the order of all this might be a bit random. 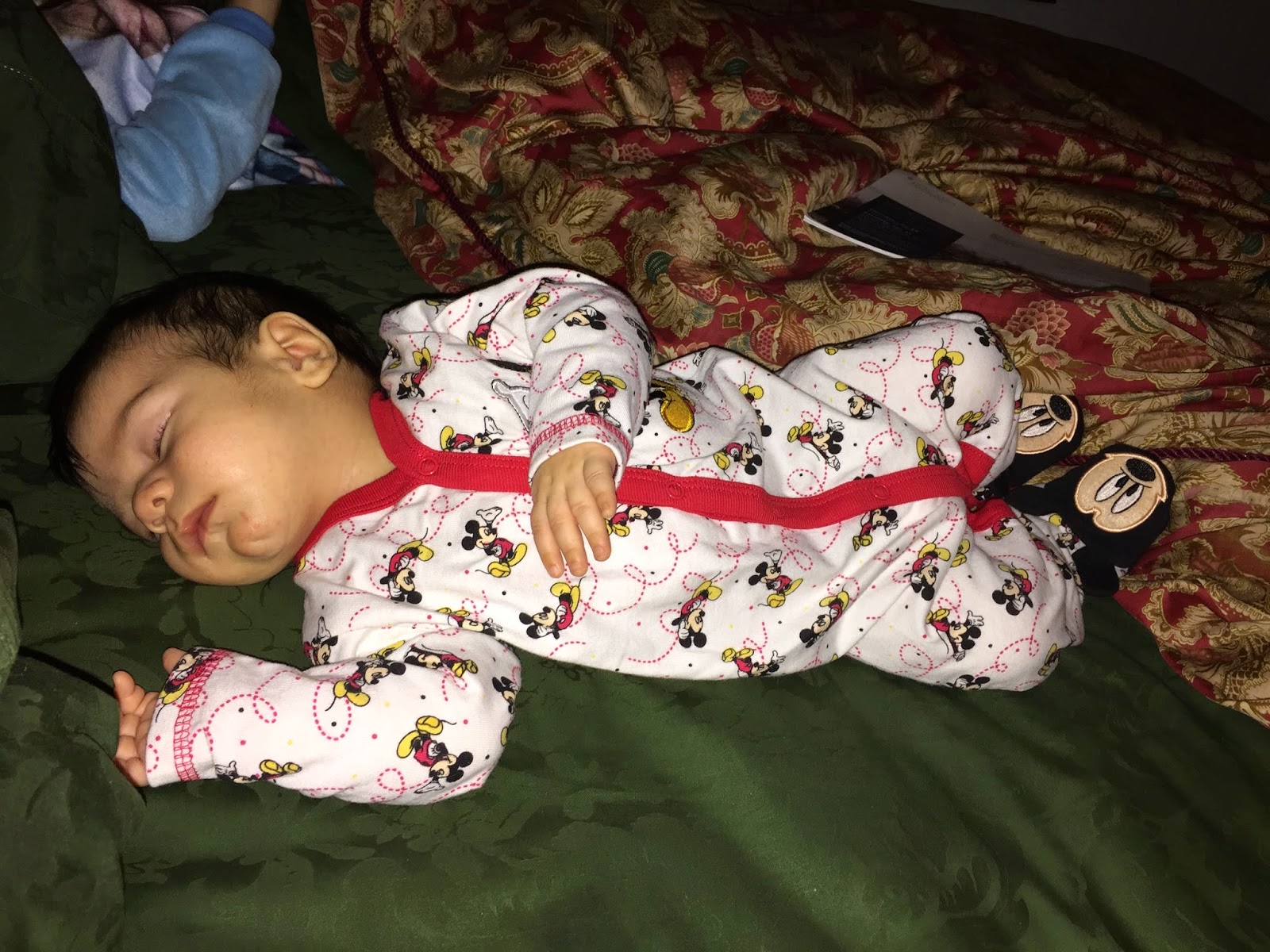 Thomas is doing really well. He is a pure joy to snuggle and so cute when he sleeps and smiles. 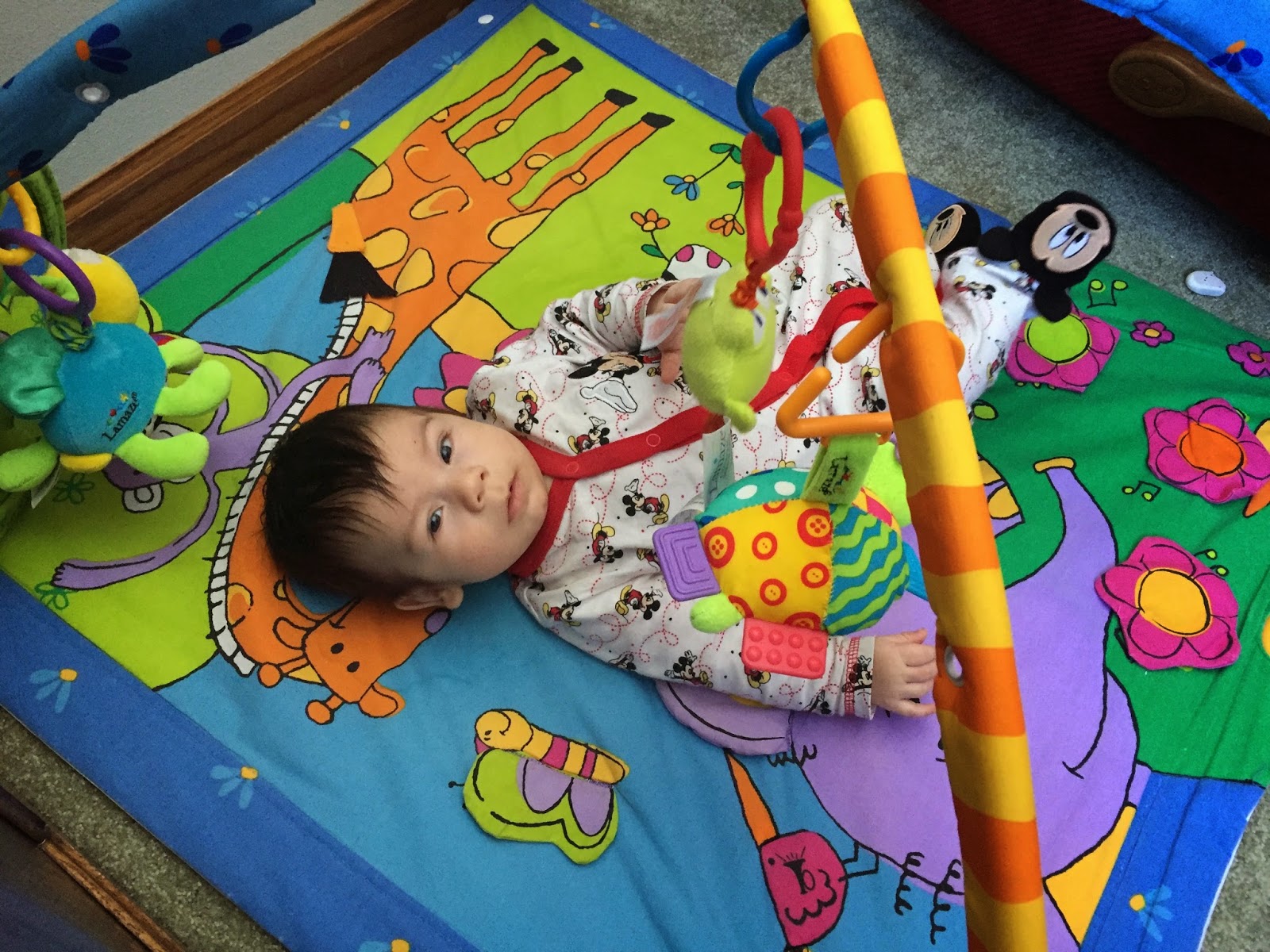 He has really got his head control down quite well and is doing well mastering his hand coordination. He loves batting at the toys that jingle back at him. 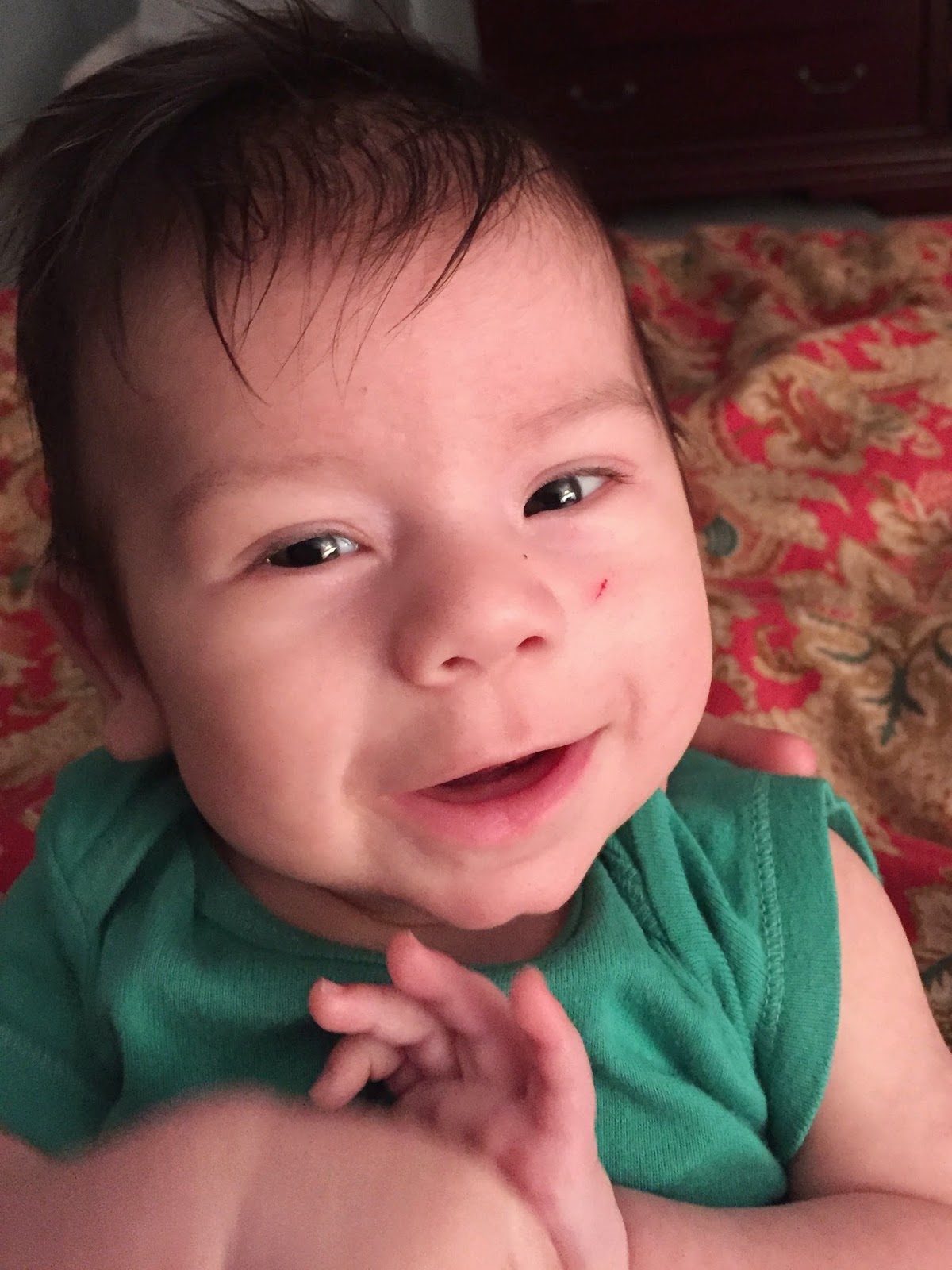 Last week he turned 3 months. 3 months!!! Where does the time go? 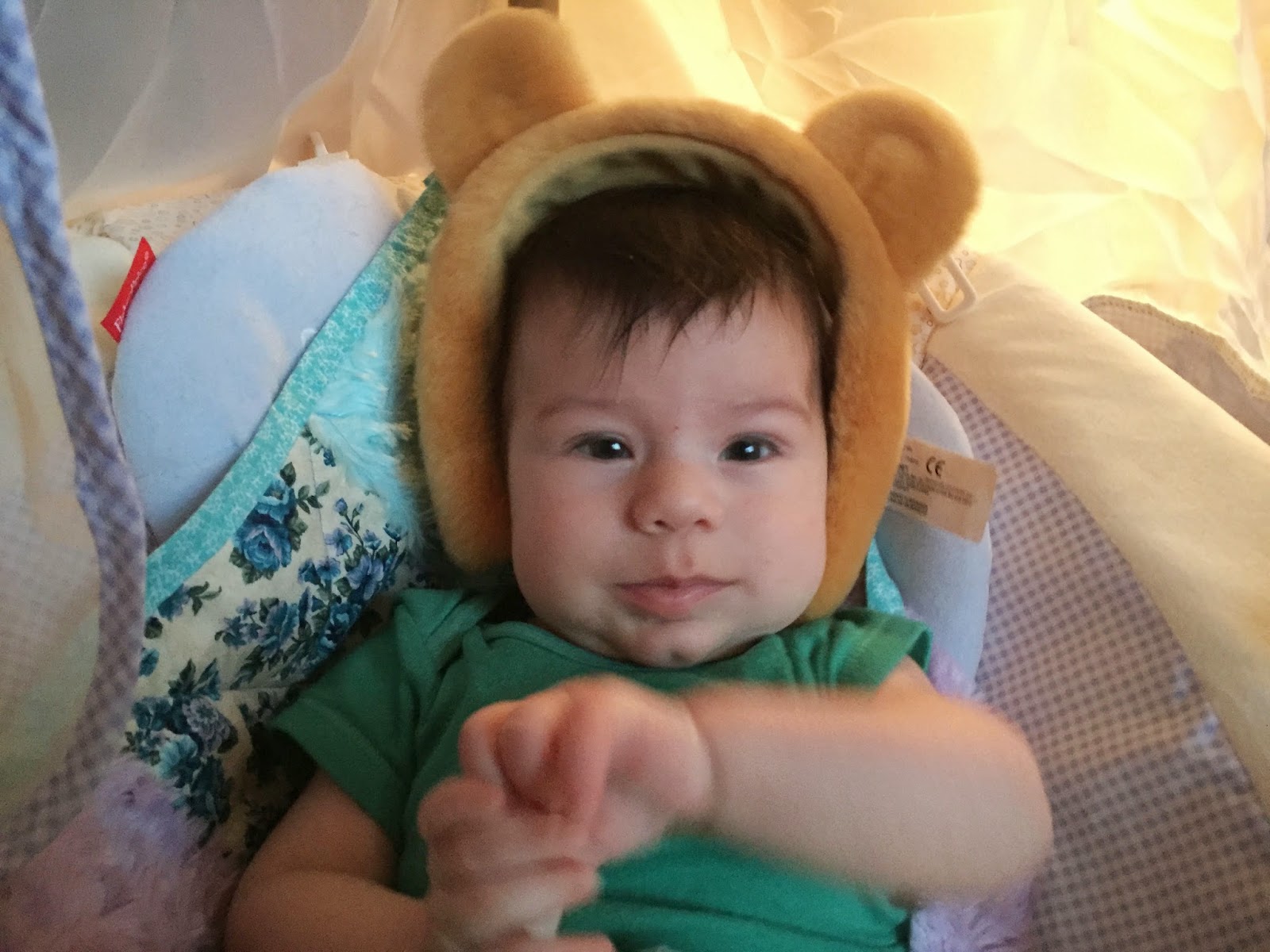 But I'm afraid he has only begun having his big sisters dress him up. Fortunately so far it has only been as Winnie the Pooh, a nice choice for a cuddly little bear. 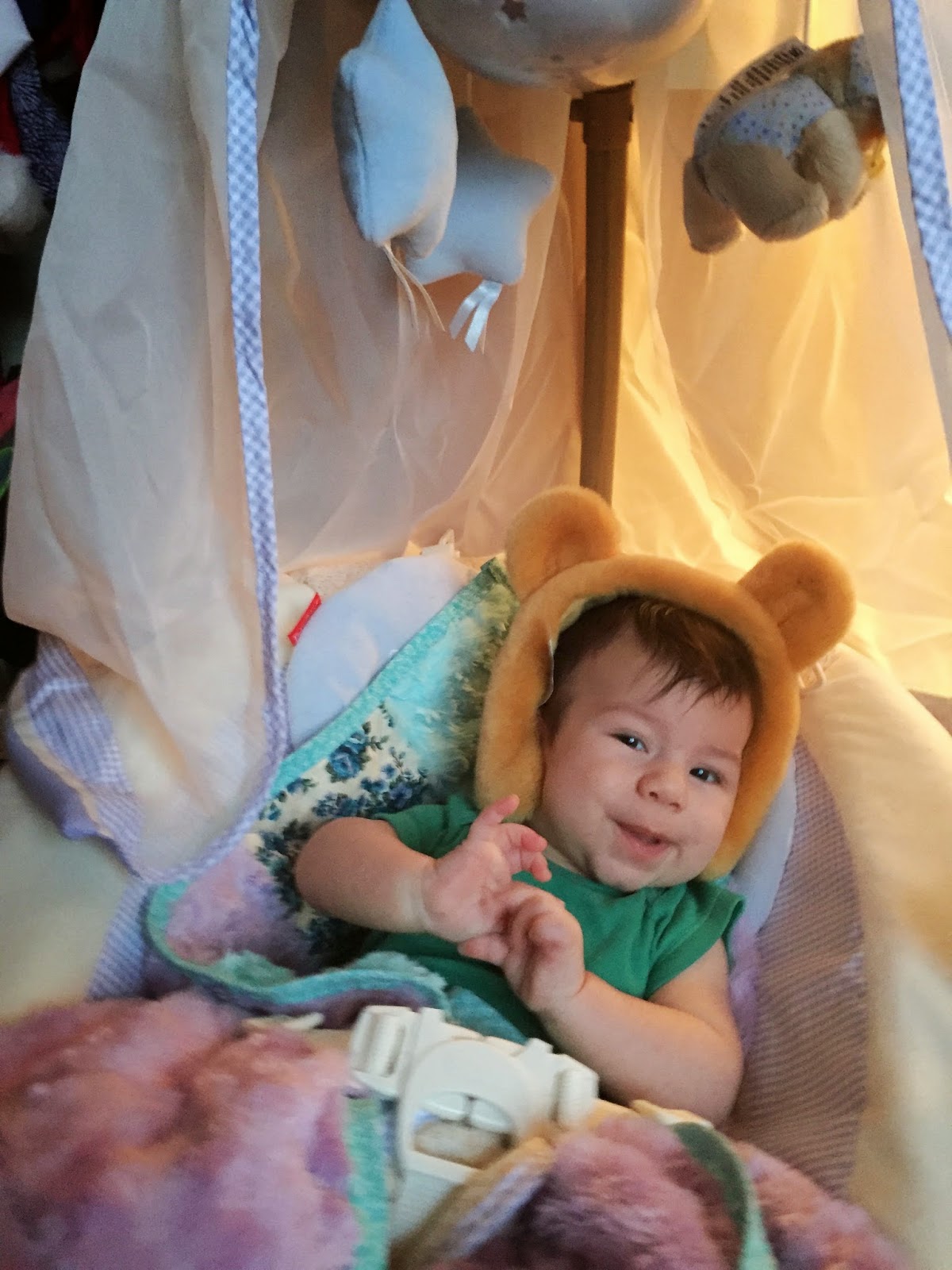 He is a really good sport about it too. 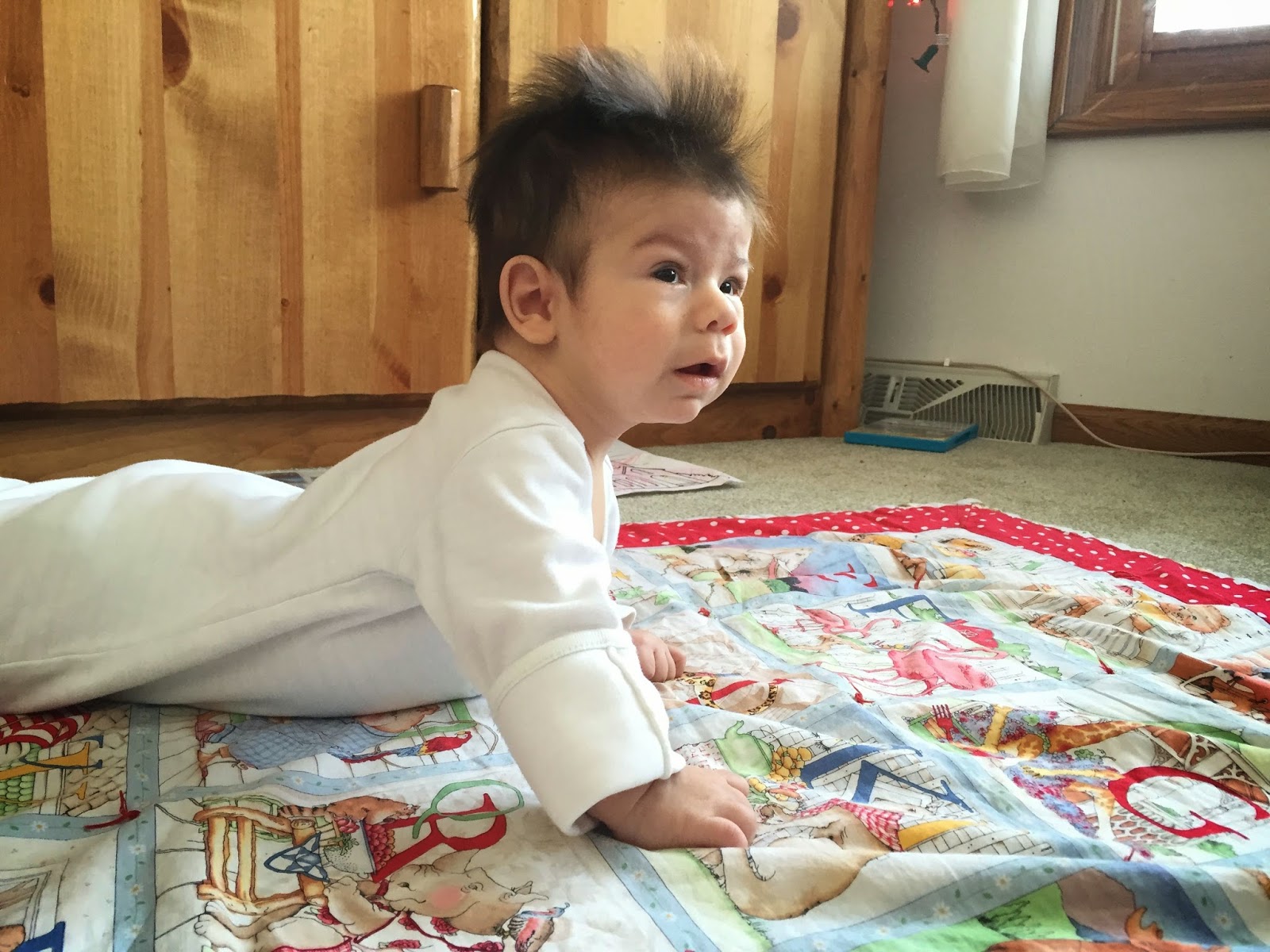 He has also begun really getting those push-ups down. He is building those back and arm muscles and amazes me how quickly he progressing. 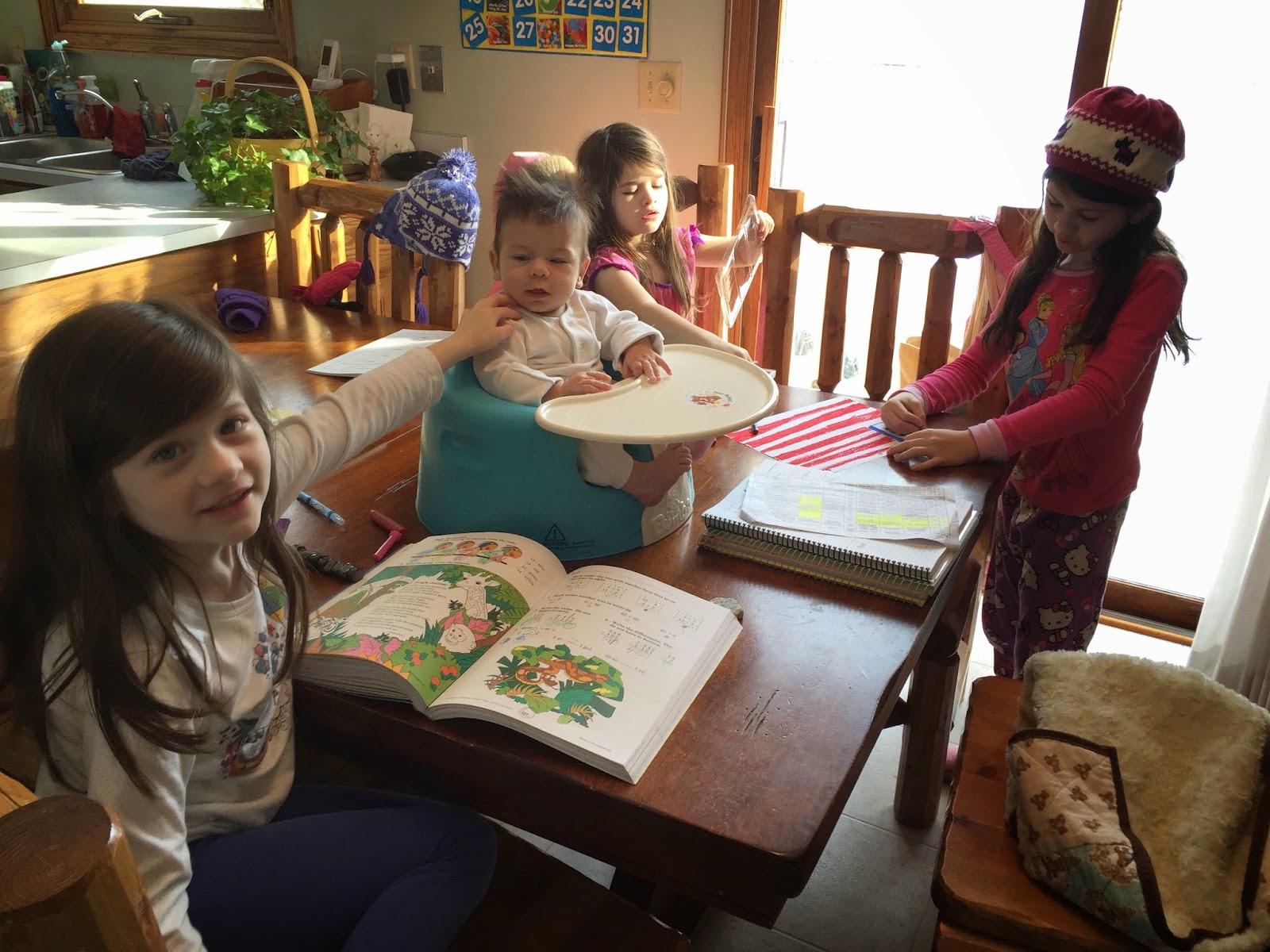 He has begun practicing sitting up in the Bumbo seat and he likes joining us for school in it. 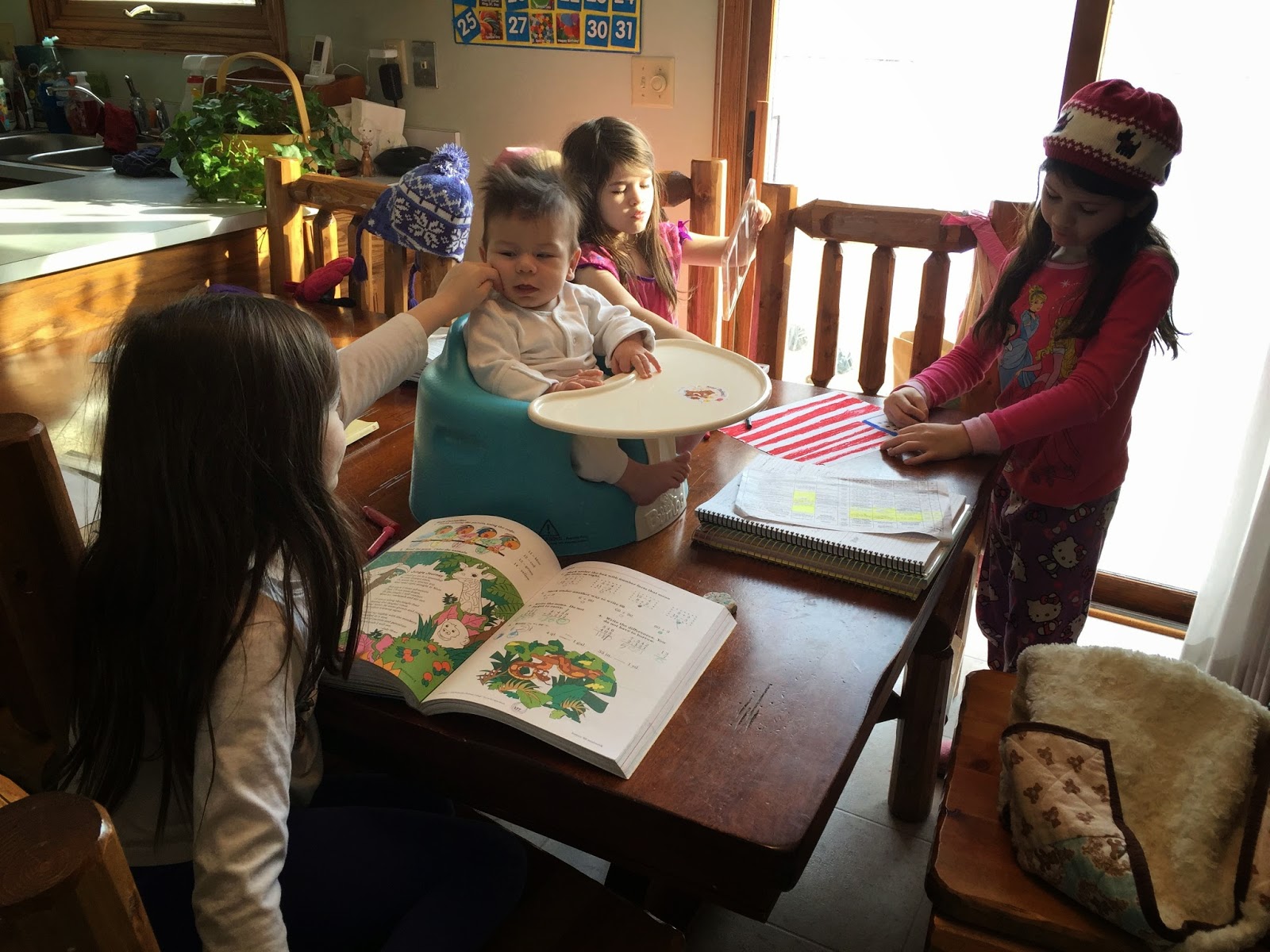 I admit less tends to get done this way. 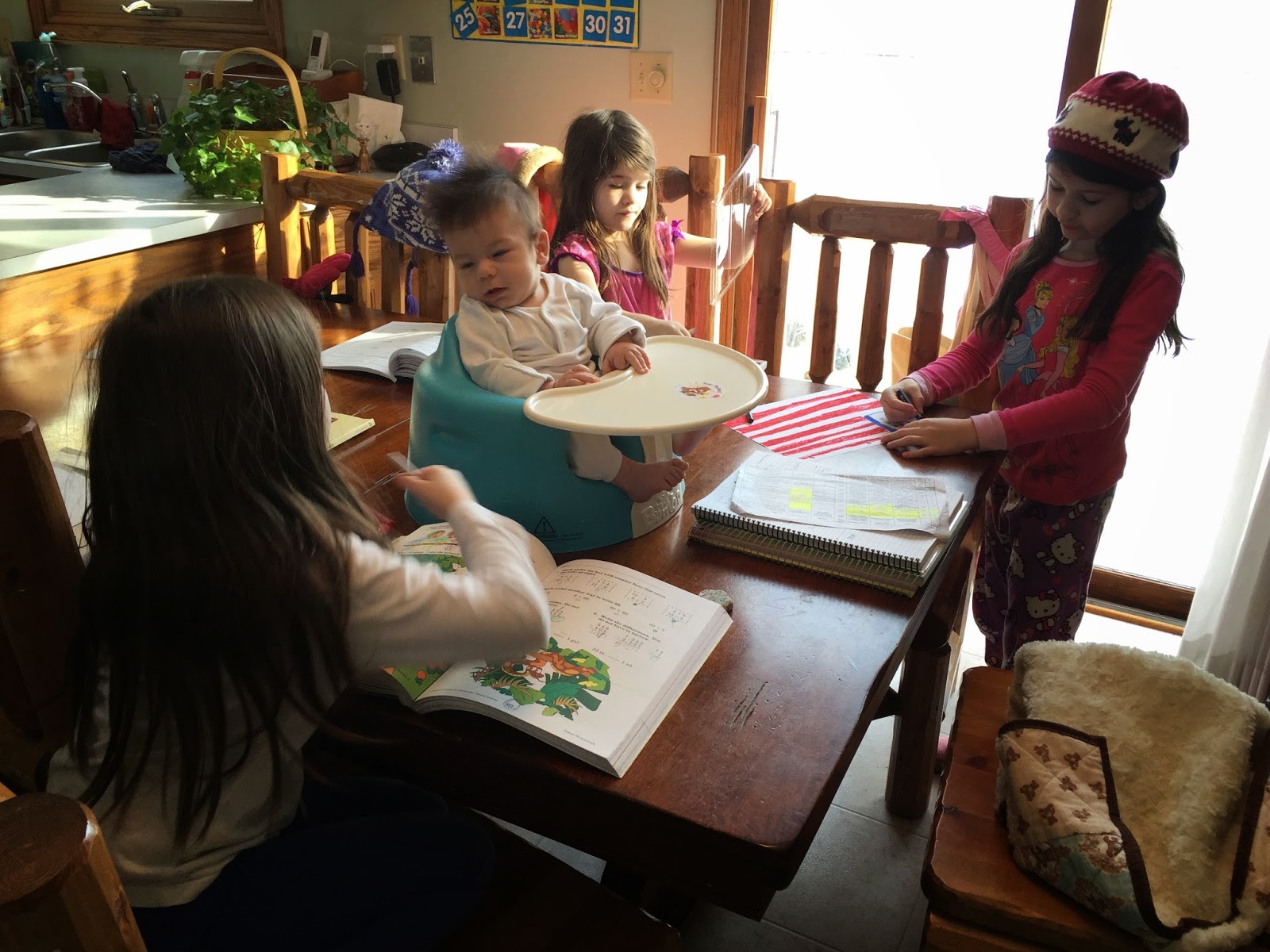 But it is hard to resist. 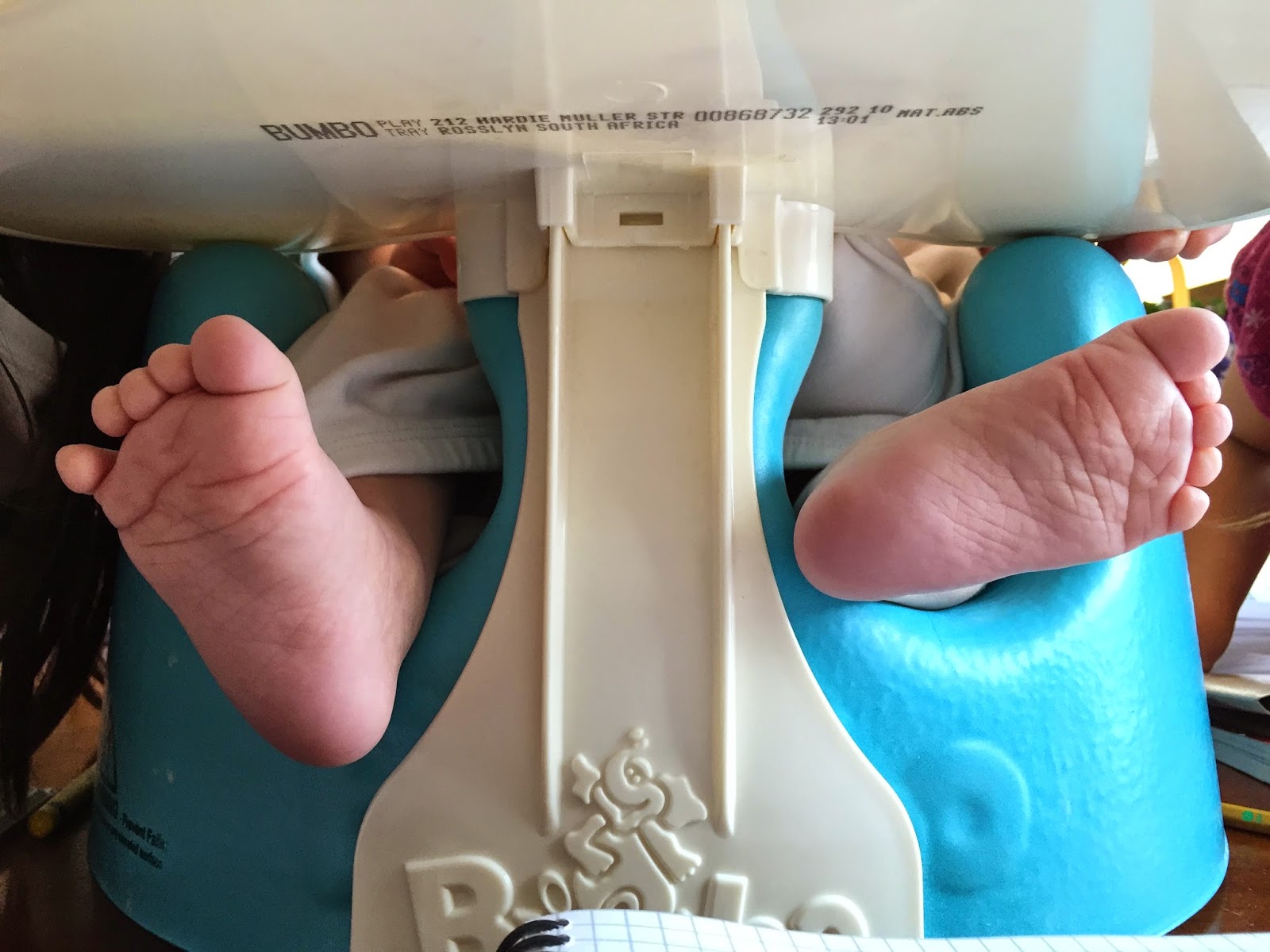 You just can't get anything done with such adorable, soft piggies staring at you just begging to be caressed and tickled! 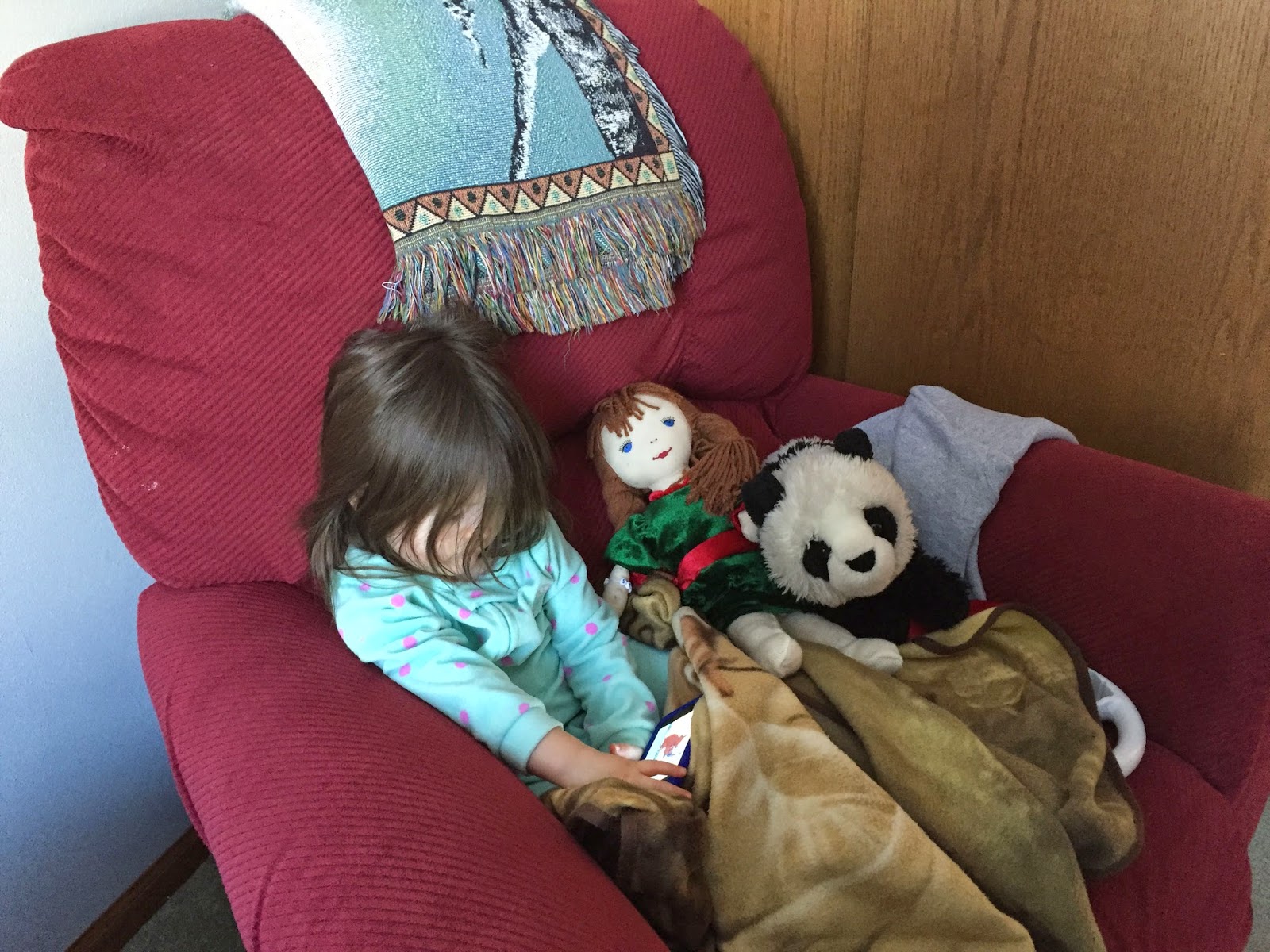 Allow me to shock you. Since turning 2, Brigid acts like it! Despite her small size she can throw a tantrum with the best of them. 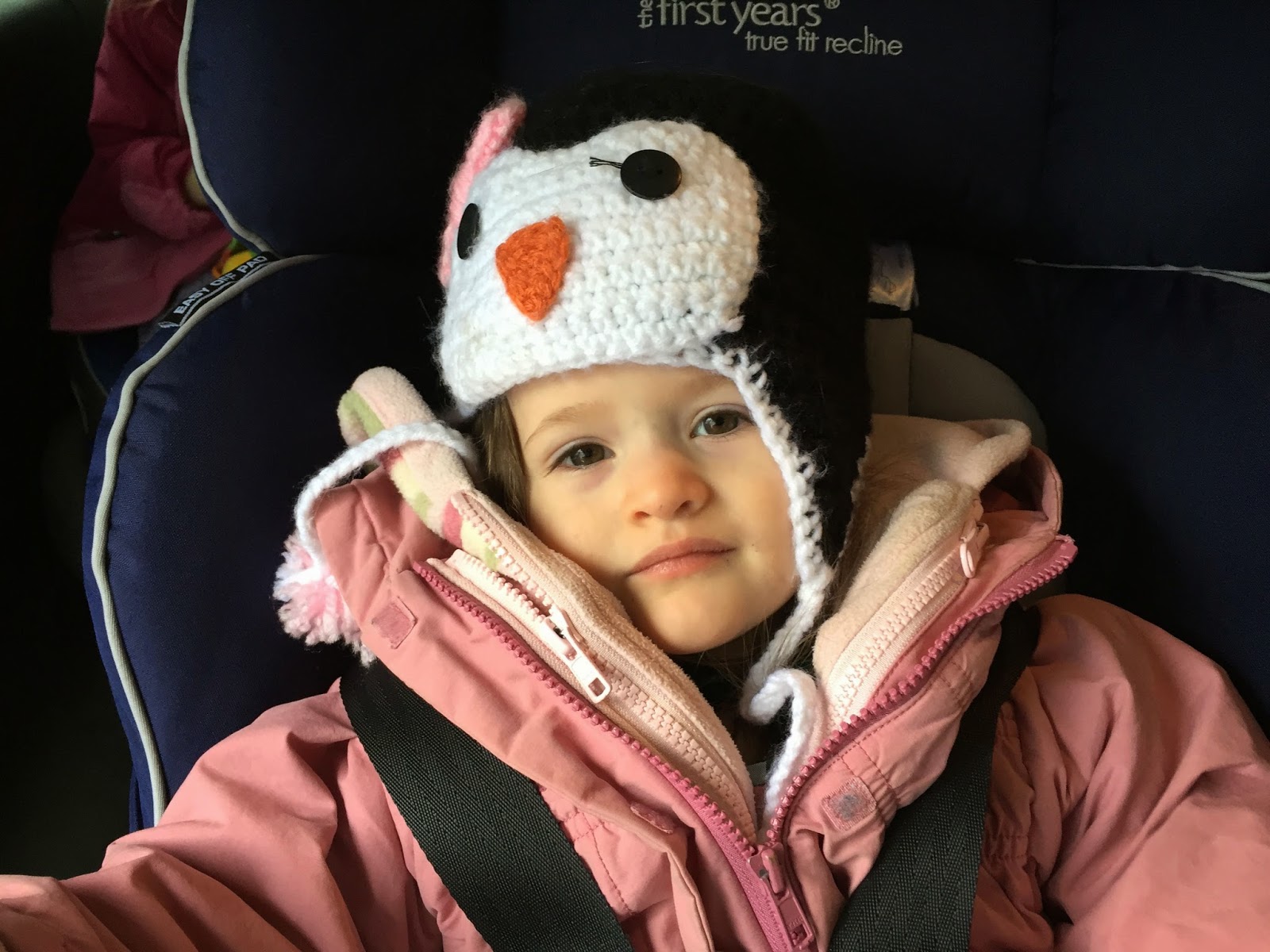 But my biggest Brigid challenge is how clingy she is. She wants me, and only me, every instant she is awake. It doesn't matter what I am doing, she wants me to hold her or let her sit on my lap and it can be exhausting. It is hard to refuse with a face like that though. 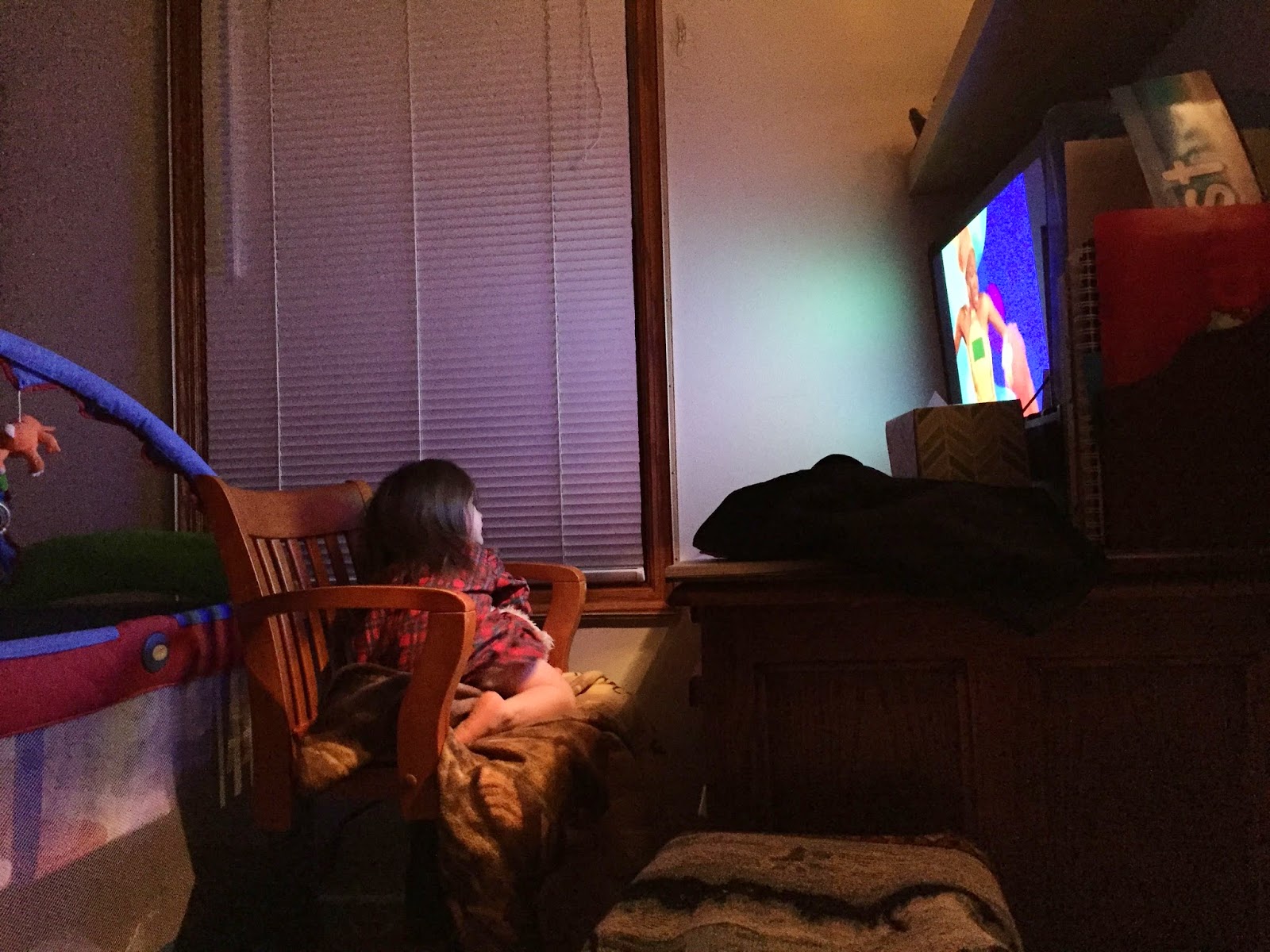 She absolutely loves a Youtube video of Elmo singing the ABCs with India and asks to watch it repeatedly. On the upside, she has the alphabet song down really well.
James and I spent two days last week rearranging 3 1/2 of the upstairs rooms. Which was exhausting. And we still have 2 or so closets to sort out. 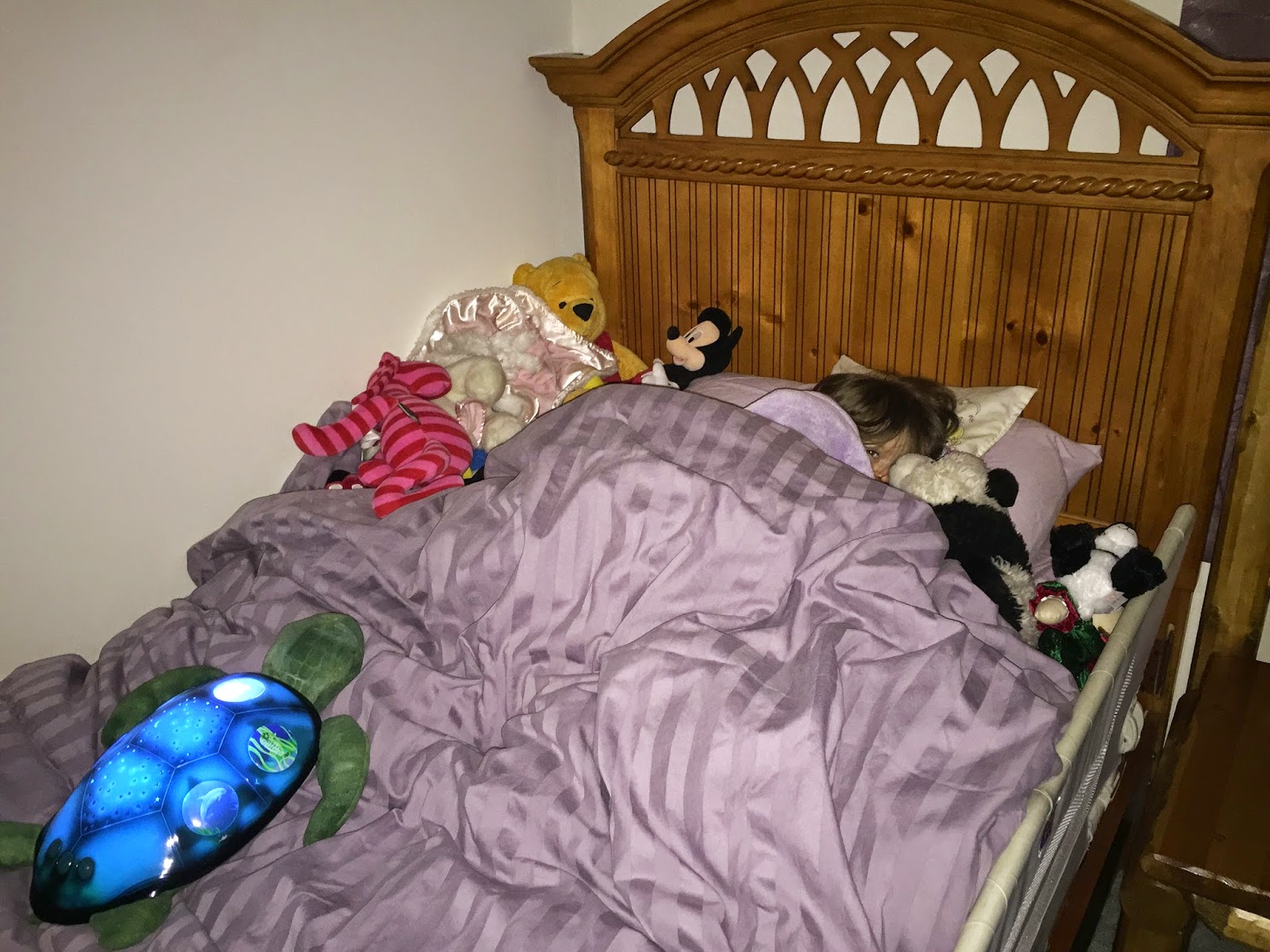 But in the end, we had set up Brigid's new big girl bed. She actually really loves her new bed and throws a fit if Teresa tries to get into it and take anything. She also loves having bedtime books read to her. Her favorites are 10 Little Monkeys, The Going to Bed Books and I Like It When (I believe inspired by Melanie's Lucy and Sophie) and she asks to have them read half a dozen times. But getting her asleep is its own challenge. Even after bedtime prayers and multiple books, she will play and bounce and sing and dance and... well, pretty much everything.

Her sleep routine is still a work in progress. She still needs a nap, but she won't go down for one easily and I can't spend hours getting her asleep by leaving Teresa unsupervised and Thomas crying. So I generally just wing nap time and if she conks out great and if she doesn't oh well and I try to have Thomas in his swing for her bedtime in case it takes a while. She has slept all night in her new bed though so she can do it. 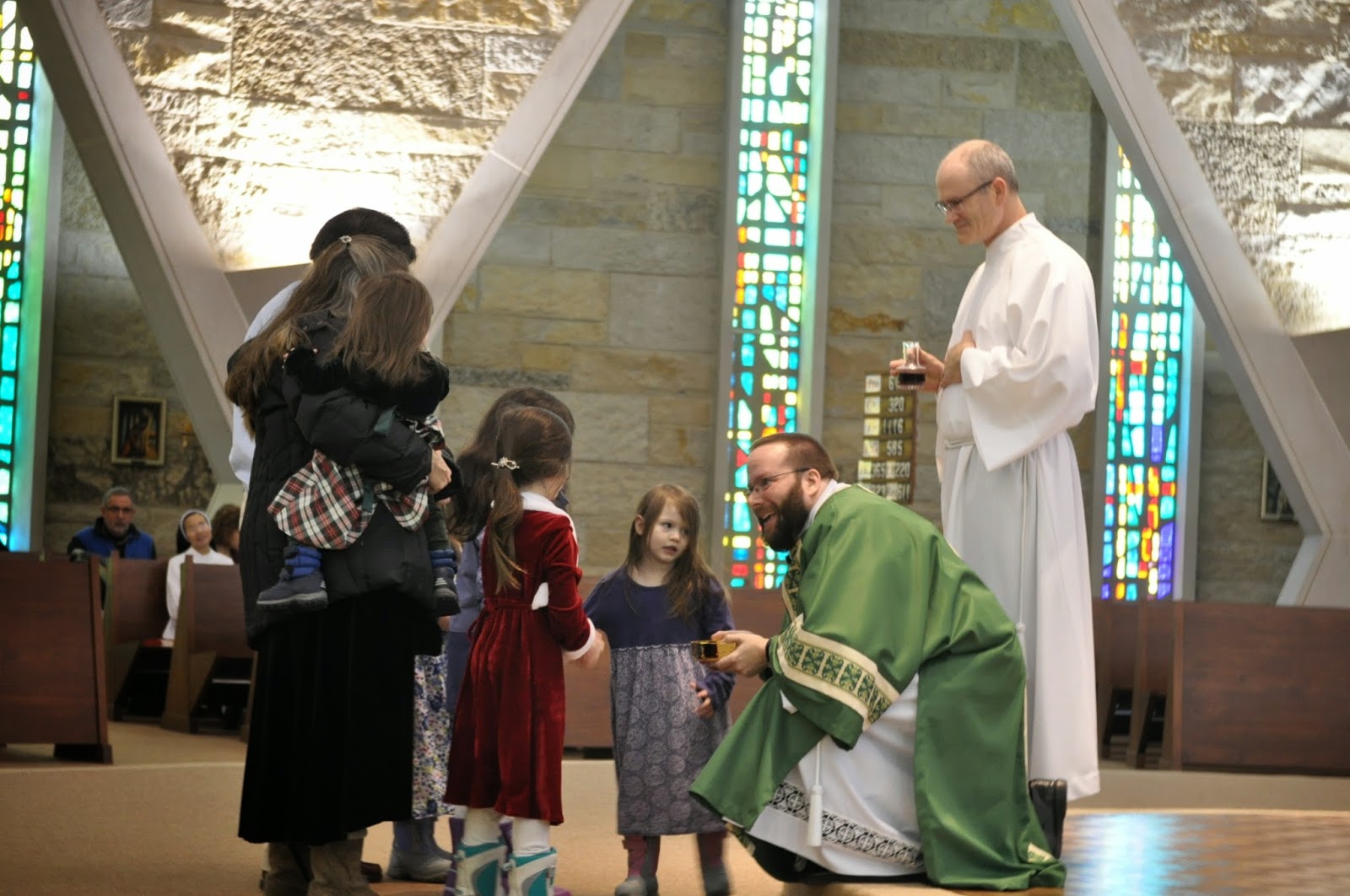 Last Sunday we went to Mass and Brunch at the seminary where James teaches and they asked us to bring up the gifts. The deacon knelt down to receive them from Cecilia and Felicity. Before he got back up though, Teresa left our side to go up to him, put her hand on his shoulder and began chatting. I've no idea what she was saying but it was so cute and so funny and so very Teresa.


During the last playoff game before the Super Bowl, Teresa got in our Elsa costume and put Let It Go on repeat and danced and spun and sang non-stop for 20-30 minutes. I was amazed watching her go. And it was especially priceless watching Brigid copy her. 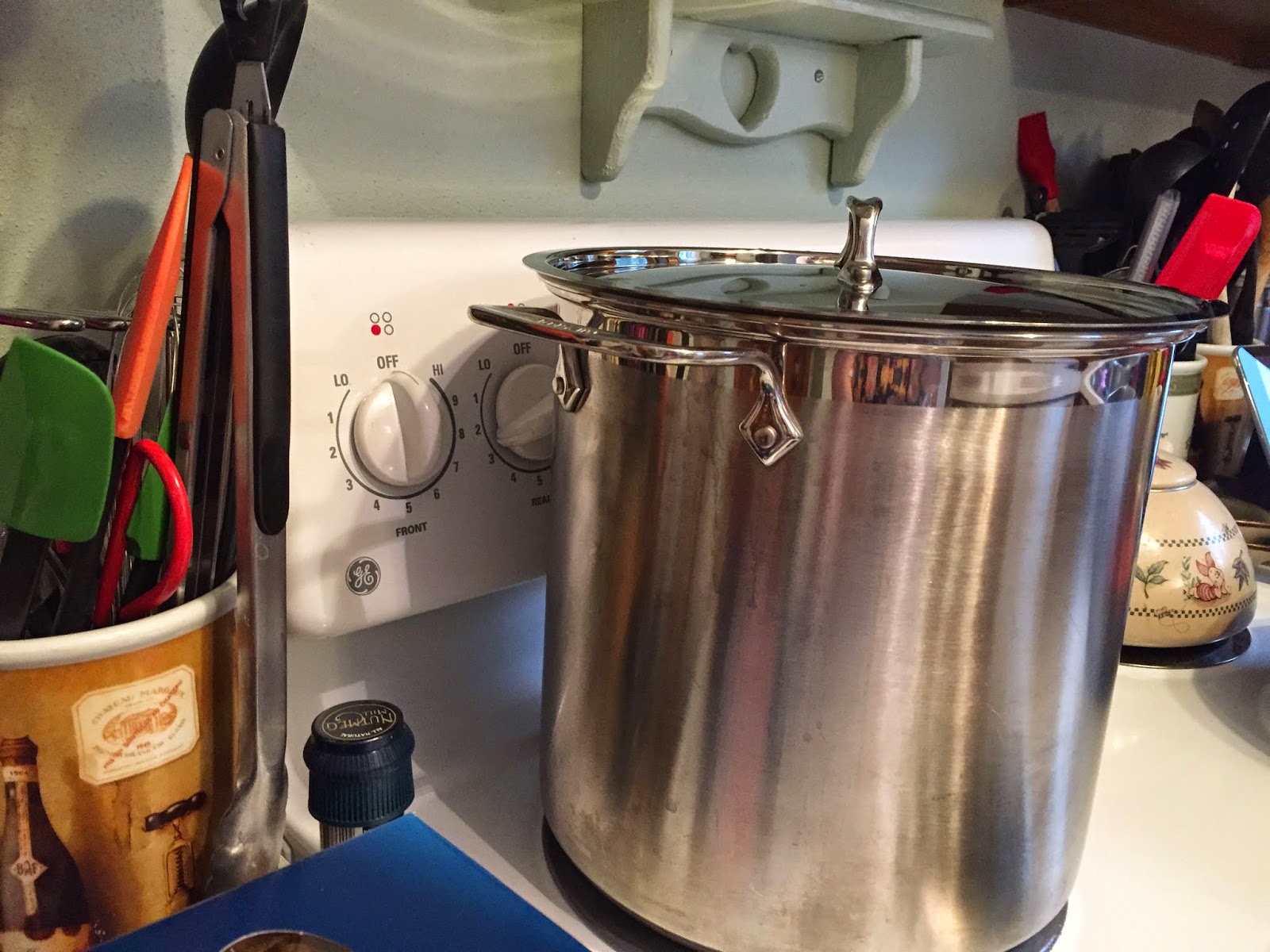 I learned my stove was not designed for my lasagna pots. 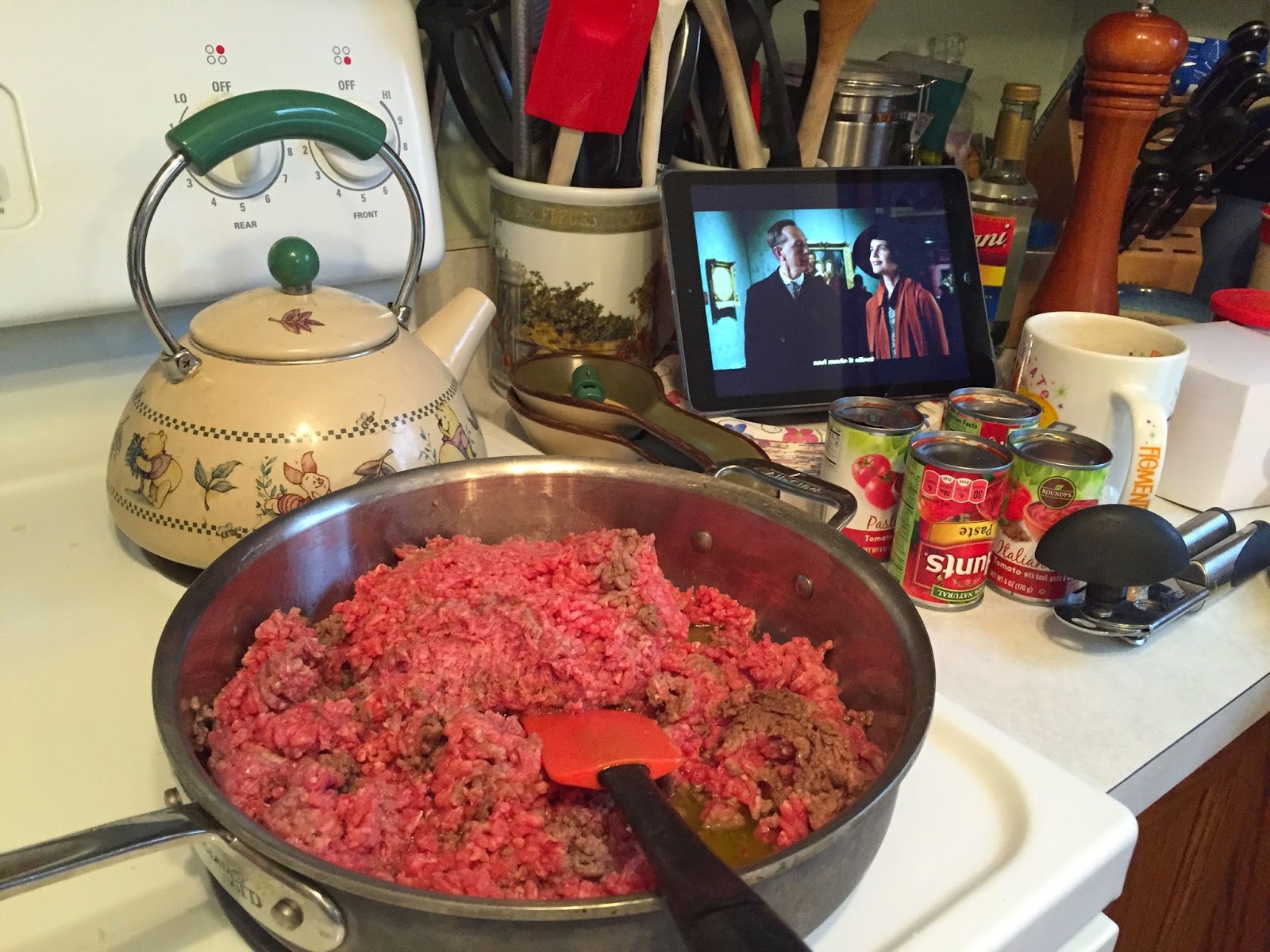 While I caught up on Downton Abbey. 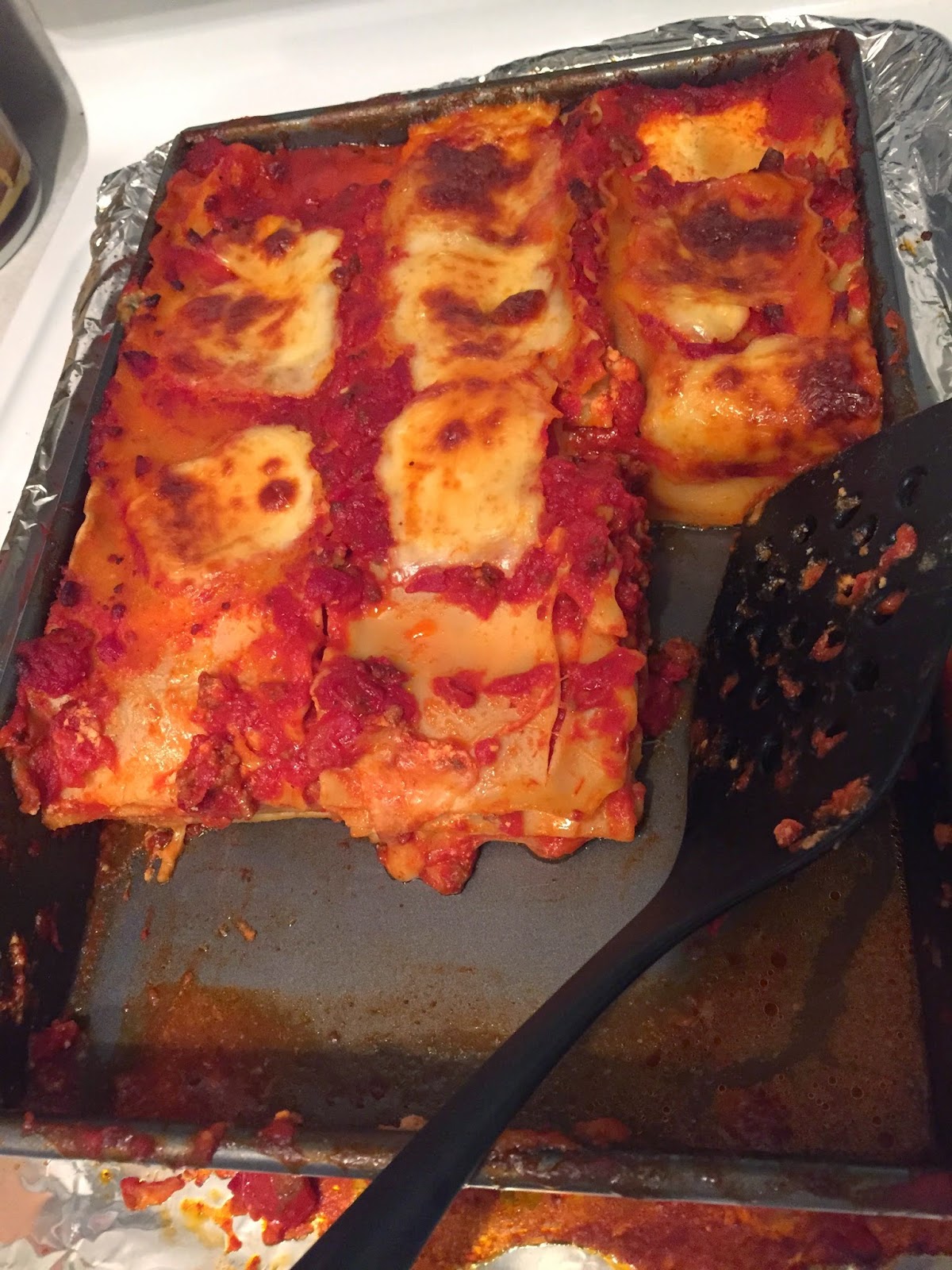 But it was still so, so delicious. One of my favorite meals. You know it is a favorite when you can eat it multiple times a day and for any meal. 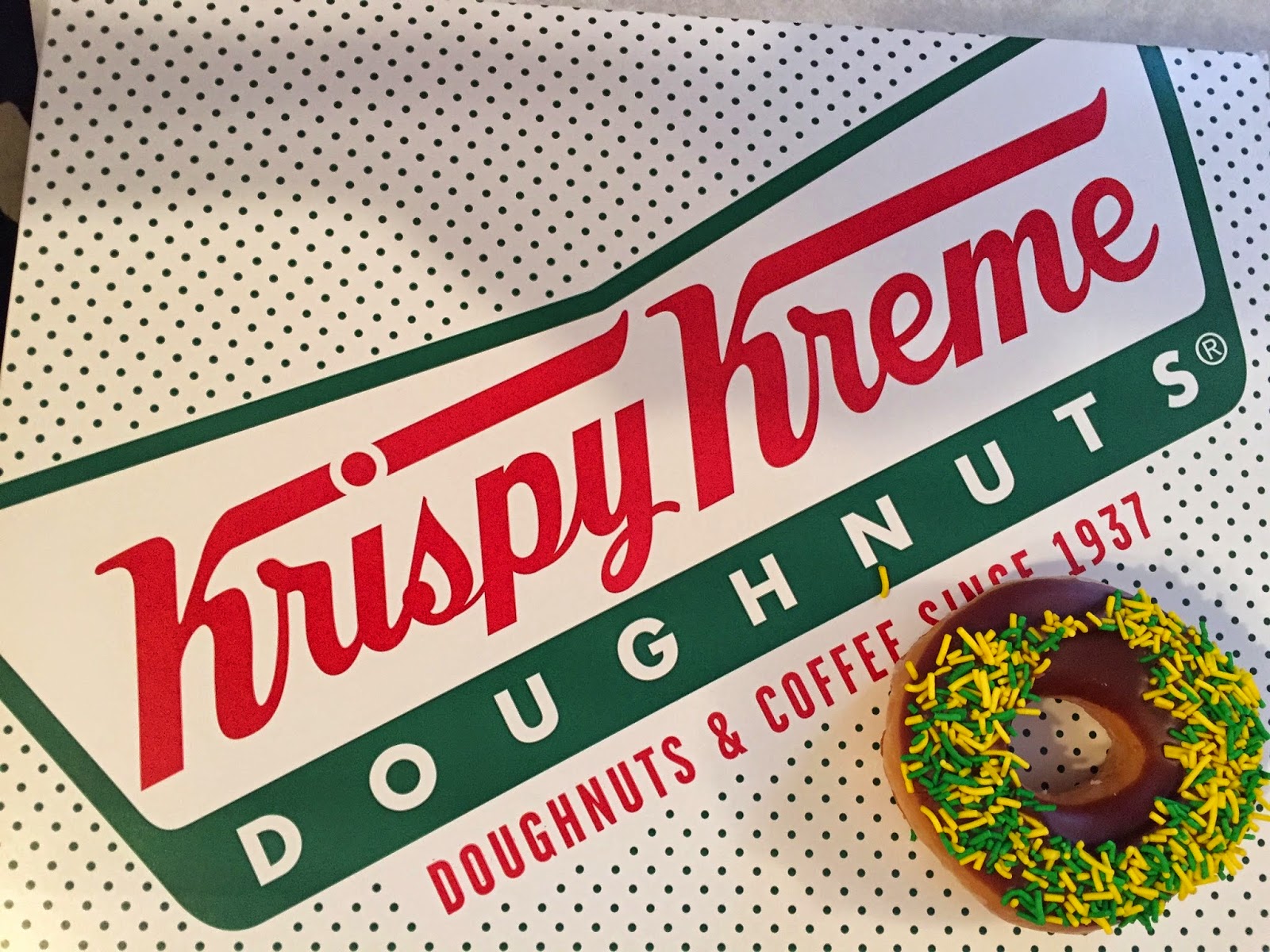 For the feast of St. Agnes, Elizabeth's patron, we had donuts for breakfast. Yes, they are the Packers colors, but more importantly, green is Elizabeth's favorite color so it was very fitting. 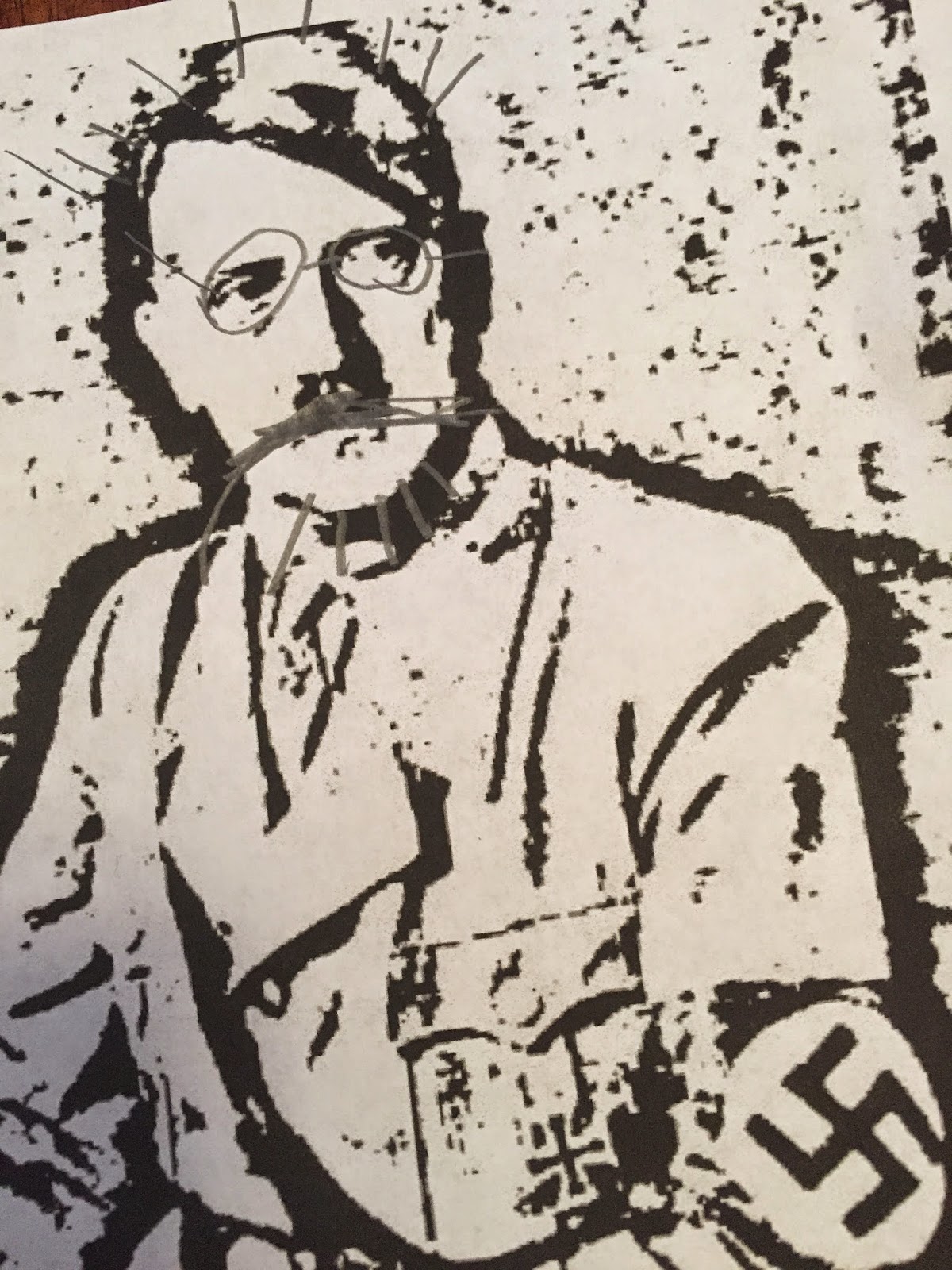 In History we have been reading about the rise of Hitler and World War II. We have even delved a bit into the Holocaust. Yes, I printed coloring pages of Hitler. This was an extra copy Cecilia decided to have some fun with. But I really wanted one where they could see the swastica well. WWII and the Holocaust is a hard subject to do with younger kids. I want them familiar with it but not having nightmares from it. I'm told the D.C. Holocaust museum has a well done children's section designed just for such a purpose but we are too far for that one now. This past Sunday we did watch The Sound of Music with commentary from myself and they could see some of the Austrian customs, clothing, etc., the beautiful Alps, and see the family desperately trying to get away from the Nazis rather than serve them. 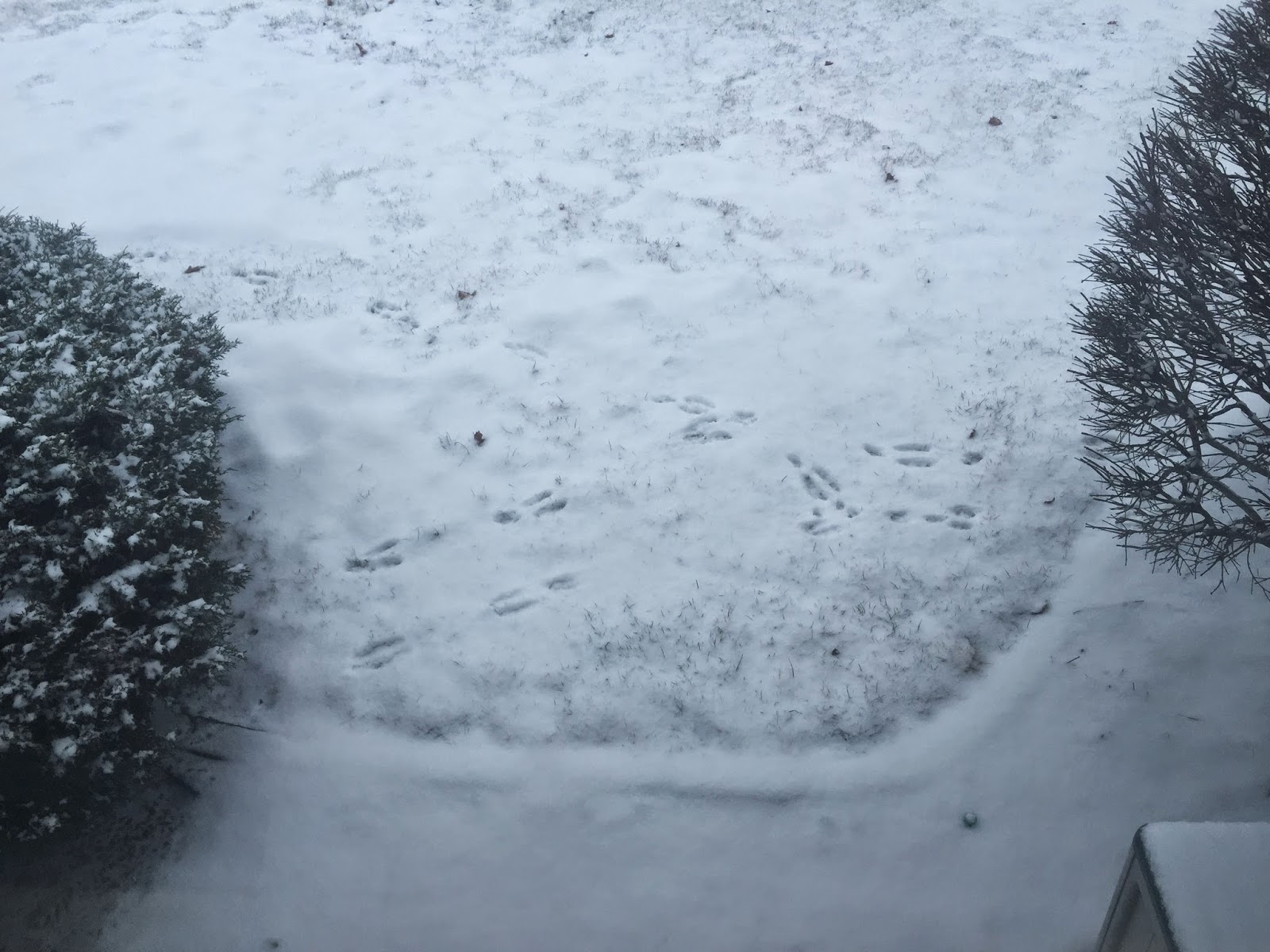 Despite the trauma of the northeast, we only got about an inch of snow. Just enough to see our front lawn pet rabbit's tracks going here and there. My girls are quite jealous and really want more snow. As long as we are stocked, sounds good to me. :)

I met my new dentist and got a much overdo cleaning. For the first time in my life I've been struggling with sensitive teeth, sensitive to both hot and cold. Turns out my teeth are fine, no cavities or decay or anything. But my gums apparently got a bit too much brushing exposing the root of a couple of teeth, so they've switched me to sensitive tooth toothpaste. He said it was a fairly common problem to have but it was new to me. Has anyone else ever experienced this?

Cecilia, Felicity and Elizabeth have all kept up their handwriting, spelling, math and english. Cecilia wrote a letter to her best friend in Maryland two weeks ago and a letter to her grandma last week. Felicity is a few pages behind in English but she has a wicked cold and is having trouble concentrating. She also just began learning roman numerals and multiplication this week.

In Religion we are going over the 10 Commandments and fairly in depth. We reviewed them all the previous week and focused on the first three this past week. I think it will be a wonderful prep for Felicity before her First Confession.

The past two weeks have been very busy from my dentist appointment to an AHG meeting, gym class, rearranging 3 rooms of the house, school and a check up for Cecilia but it all culminated in a birthday. 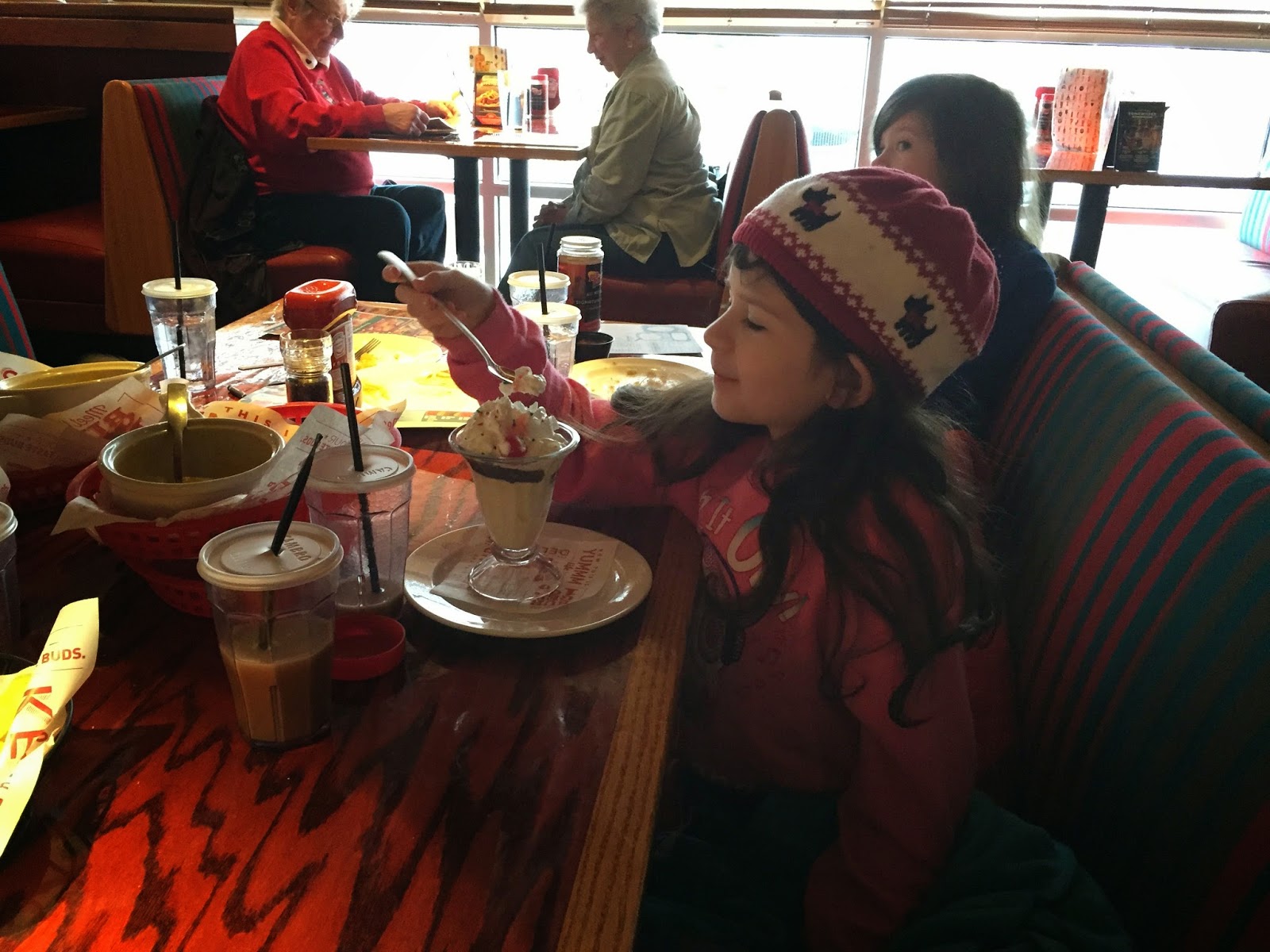 Cecilia is now 9! That's half-way to 18! We celebrated by going to her restaurant of choice: Red Robin, at which she got sung to and a free ice cream sundae. 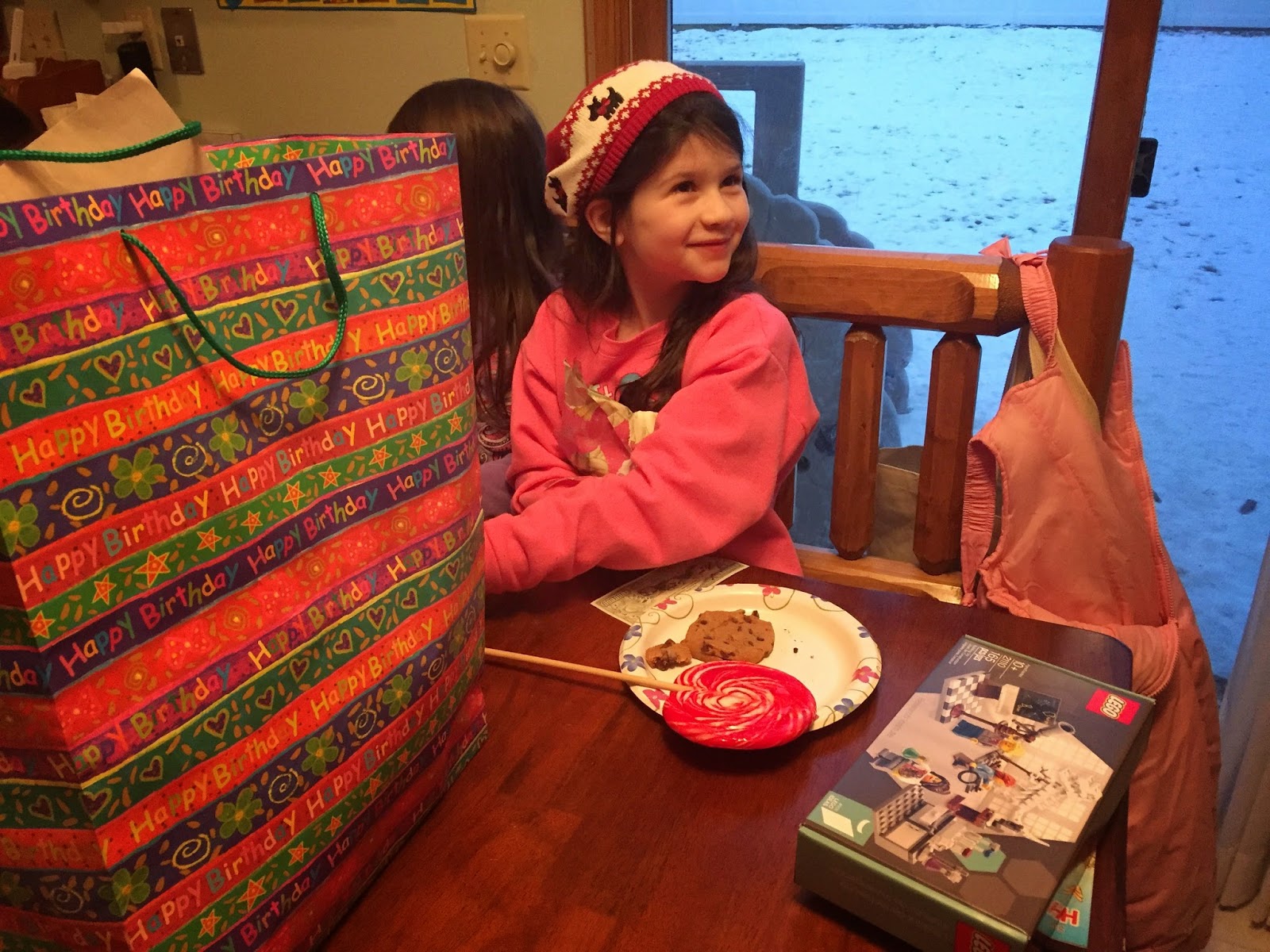 We are waiting until next week when my dad will be visiting to have cake and open her presents from him and my mom but we did sing Happy Birthday yesterday over various treats and she got to open her presents from James' parents and us. We got her five books: Habemus Papem! Pope Benedict VI (a mange type comic book about Pope Benedict), Merlin and the Making of the King, The Kitchen Knight: A Tale of King Arthur, Sybil Ludington's Midnight Ride and Season of the Sandstorms (Magic Treehouse book #34). We also got her a special Lego set called Research Institute which consists of 3 Lego scenes of different scientists, all girls. 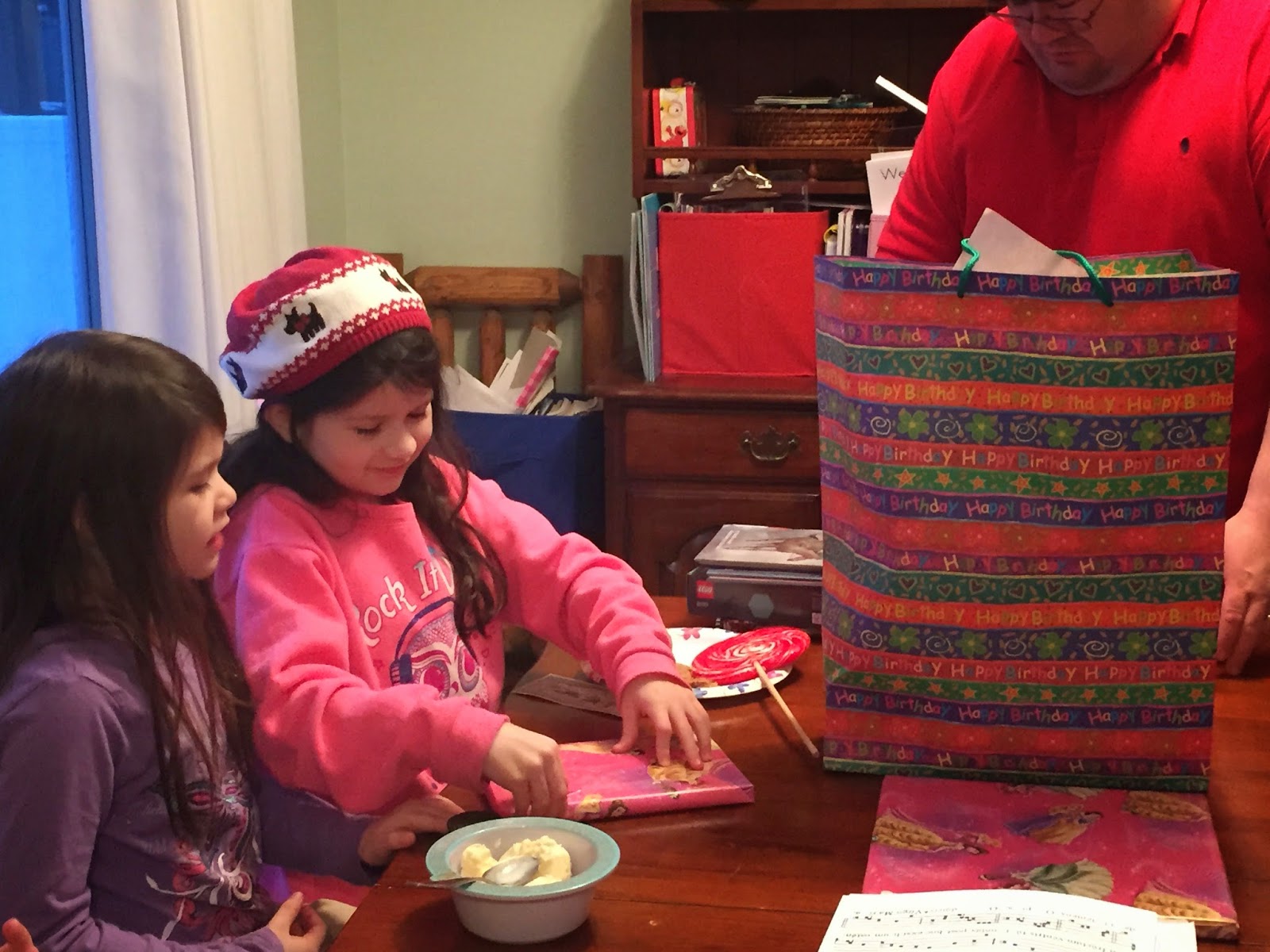 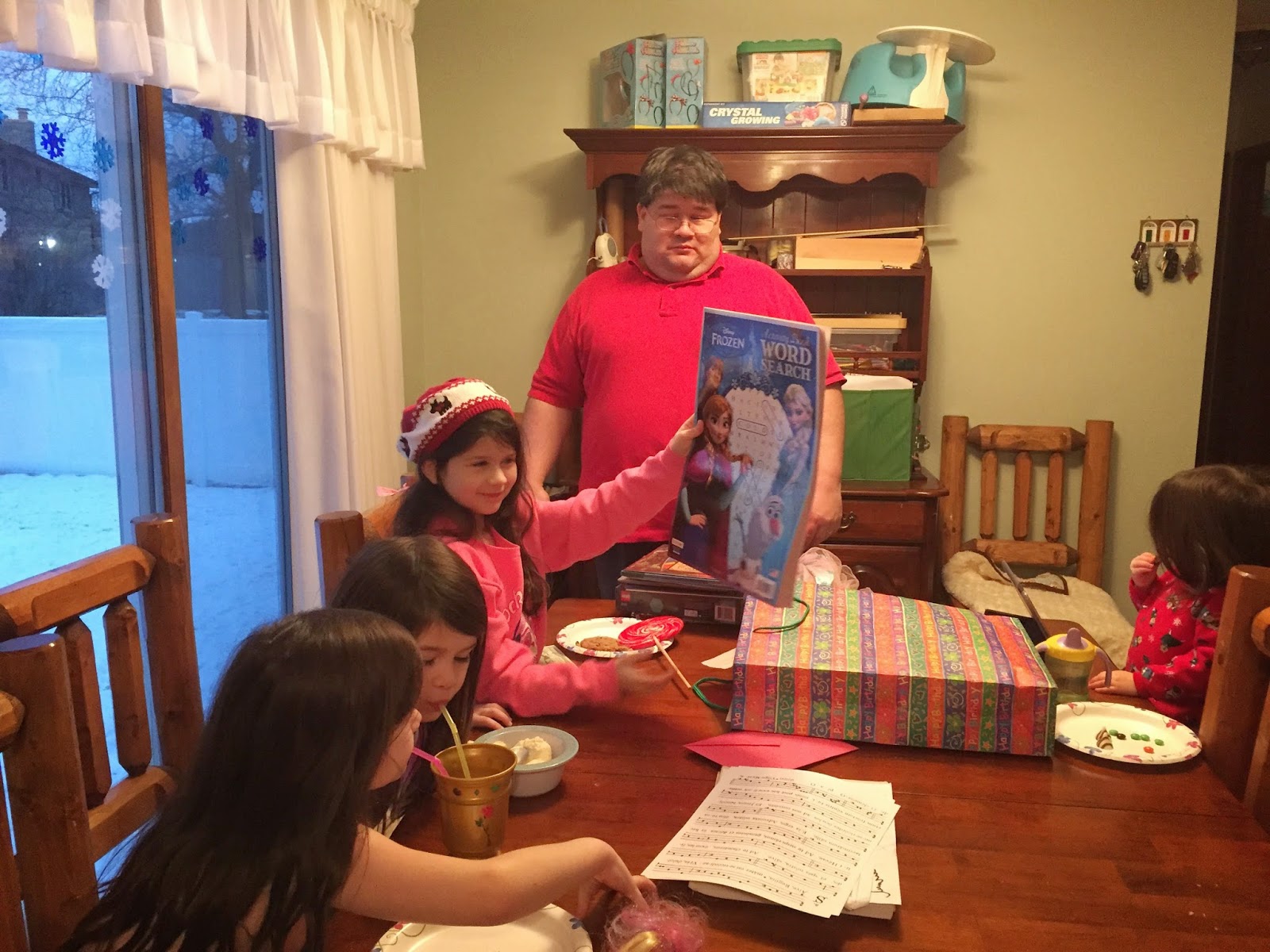 James' parents got her a Hello Kitty top with skirt, Frozen puzzle book, a figure of Snoopy that plays the drums and a set of Hello Kitty stationary. 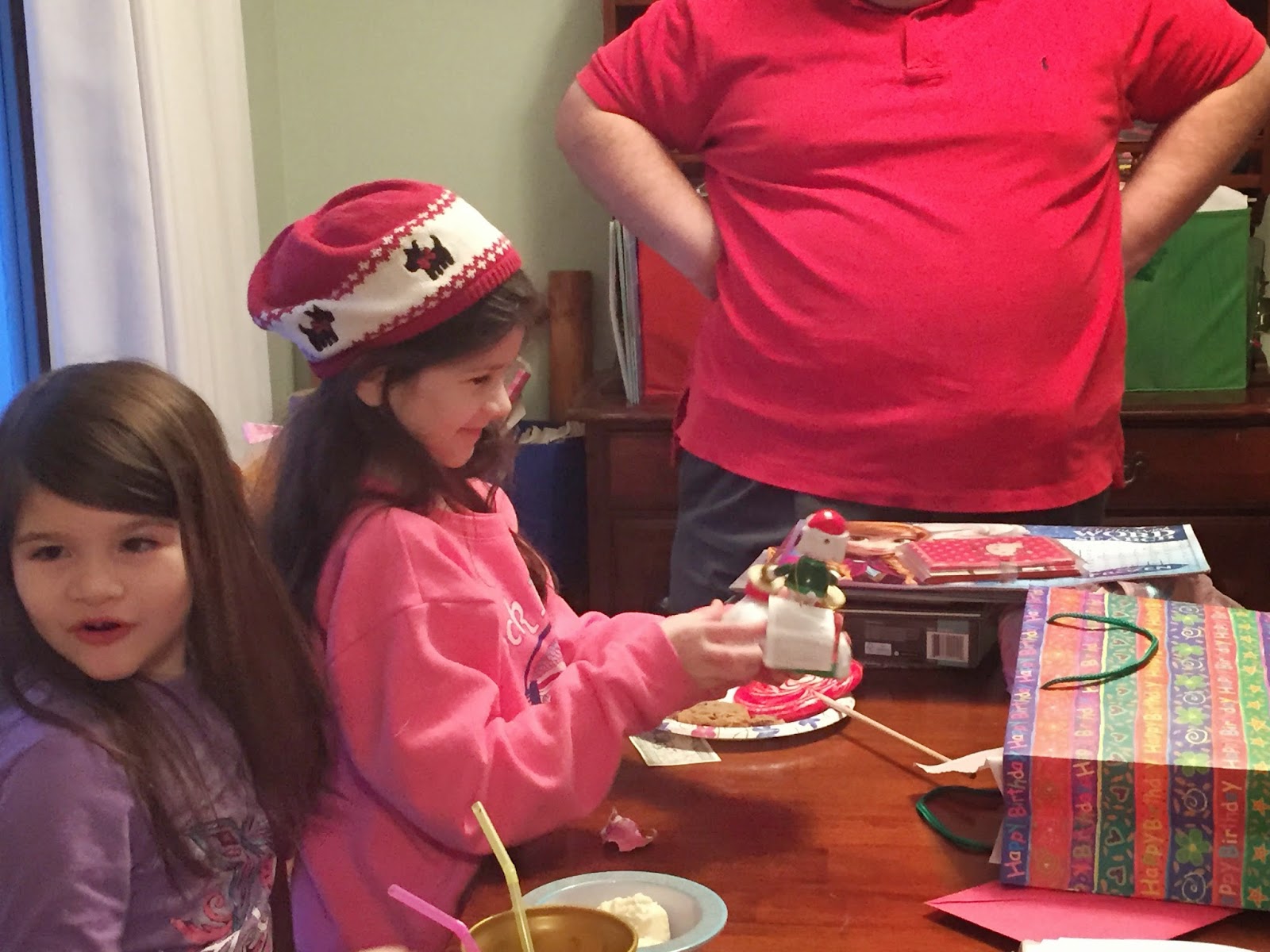 Otherwise, she played video games much of the afternoon but she also got to Skype with her best friend from Maryland, so that was a nice treat. Even though we aren't having cake until next week, we will also be going to the local children's museum, going to see Paddington and having wave 2 of presents so, while she said she had a great birthday, it isn't really over yet.

I hate to admit it, because I realize this post is really long, but that is just the surface of the past two weeks. Unfortunately many details are lost since I wasn't writing as the week progressed, but I will try to do better next week. Next week will be busy as well but that is another post. Blessed Weekend! :)

More Learning Notes at Melanie's Link Up!
Posted by Katherine at 4:17 PM