We got up Sunday to some pretty cold temperatures 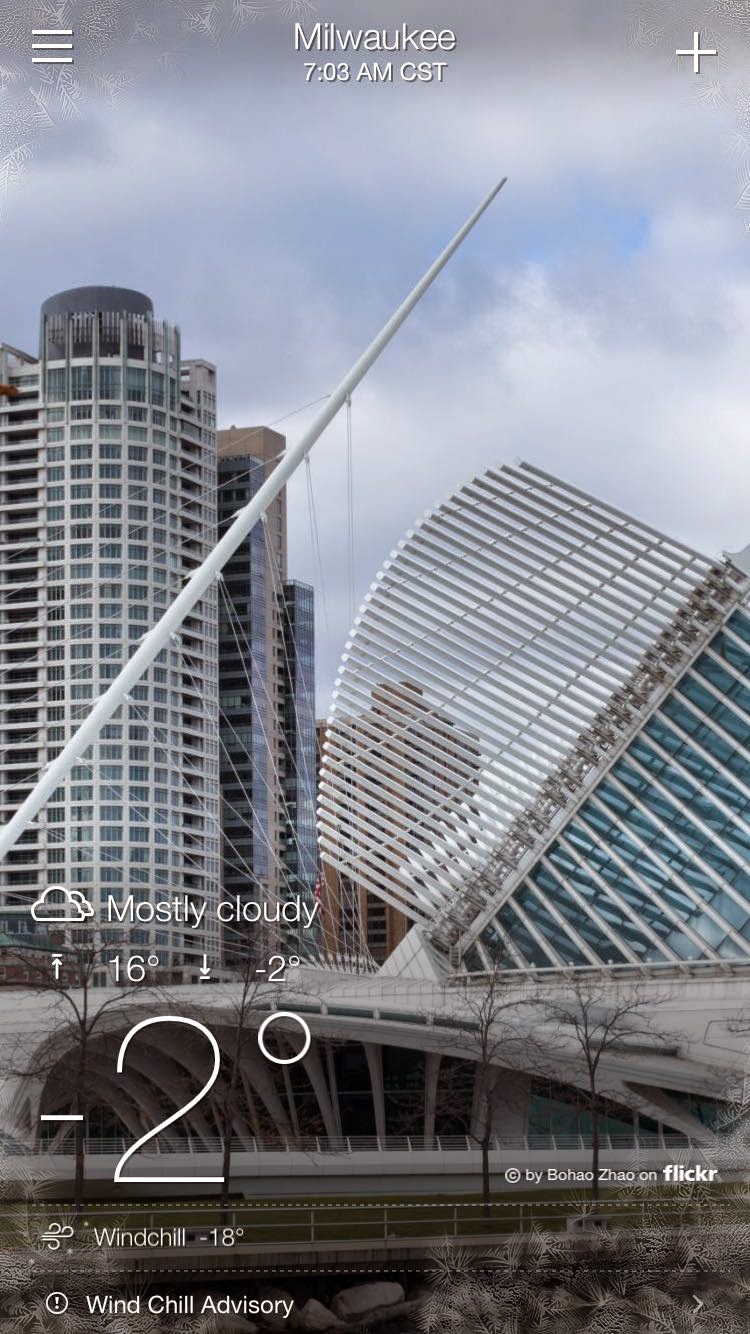 So James and I tag-teamed Mass and kept the kids inside.
But since I'd set up the atrium, the older girls held their own Mass. These are the missals they made: 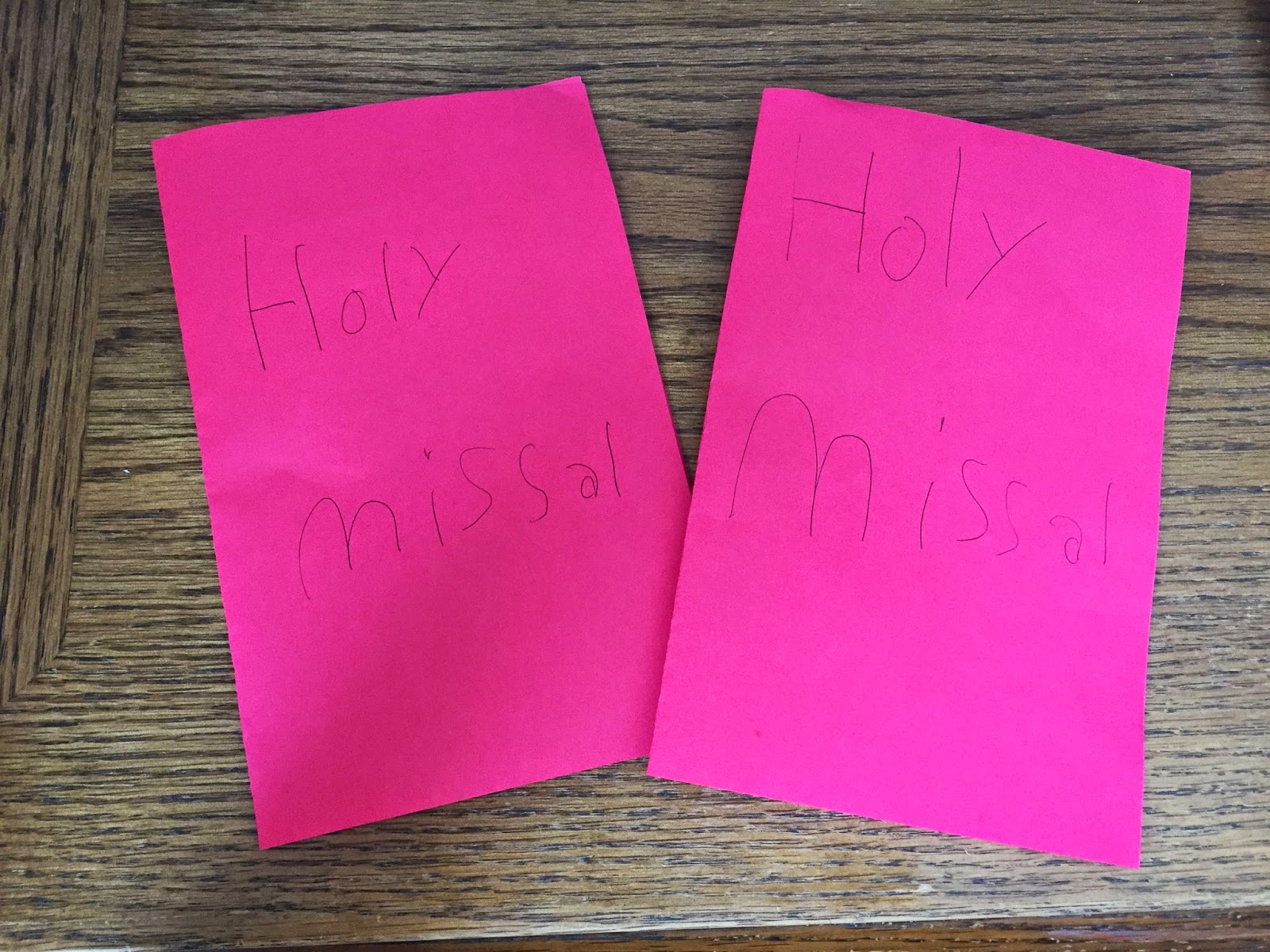 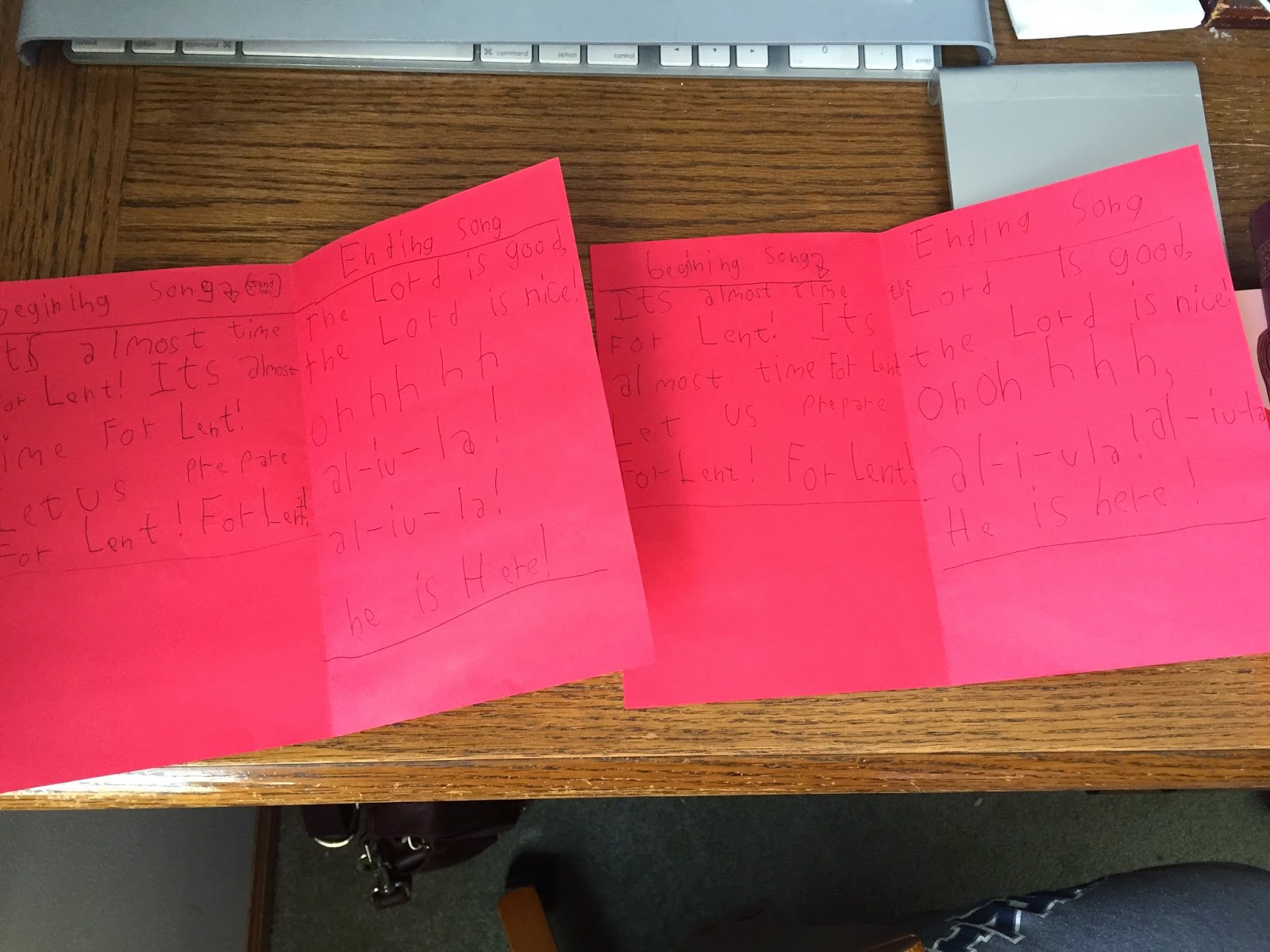 I love the songs they made up!

Monday, February 16th, Washington's Birthday, Presidents' Day
Since we had no gym today and I knew Wednesday and Thursday wouldn't be great for getting school work done, I tried to get a lot done today. Felicity did her handwriting, geography and spelling. Cecilia did her handwriting, geography, and a math lesson. Elizabeth did all 10 pages of her math for the week. For history I let Elizabeth skip it and briefly went over the beginning of the conflict in Vietnam and the Korean War. I really feel like a lot of detail on these would be over their heads but we talked a bit about communism and the disagreement between the US and the USSR on whether more countries should be communist.
After dinner, I drove Cecilia, Felicity, Elizabeth, Thomas and myself to our AHG meeting, realizing 30 minutes into the drive that I had not brought the diaper bag. Fortunately, another mom who is in the troop came with her 2 month old who already weighs more than Thomas donated a diaper. Elizabeth and the Pathfinders read a simple biography of George Washington and colored a sheet drawing him and filling in information about him. We briefly went over the Pledge of Allegiance and then we demonstrated voting by voting on whether to play Simon Says or Red Light, Green Light. Red Light, Green Light won and the kids had a ball for 10 minutes trying to out run and tag each other.

Tuesday, February 17th, Mardi Gras
Felicity dove early this morning into her spelling and got that done. Then she began math and got about 7 pages done! Elizabeth did her english, spelling, geography and handwriting, completing her individual work for the week. Cecilia did her spelling and another math lesson. Some of the times tables she knows inside and out and others she still blanks on. I need to find a time to help her nail those down but I'm not sure when yet.
Wednesday, February 18th, Ash Wednesday
We all got up early to go with James to the seminary for Mass. Fortunately, other than Teresa laying on the aisle floor for a bit, the girls were pretty good and Thomas was easy peasy. For several of our kids it was their first Ash Wednesday Mass. I'm sorry I couldn't get any pictures of our ashes but Brigid's hair blocked any ashes from actually sticking to her head, Felicity and Elizabeth refused to get ashes, Cecilia didn't want to get any (which surprised me as she has gotten them before, but perhaps the environment made her self-conscious) and Thomas' and mine mostly wore off before I could get any decent picture. C'est la vie.
After making mac and cheese and broccoli for lunch, Cecilia did her remaining 2 math lessons and her english to be done for the week while Felicity finished her math and began her english. But the snow was beckoning. All five girls went outside to play for a bit even though it was 5 degrees with a wind chill of -14. I admit I didn't realize it was that cold when I said they could go out but it certainly explains why they didn't last long. Cecilia and Elizabeth did try multiple times to get Rosie to pull them on the sleds but they were too big and she was too small. 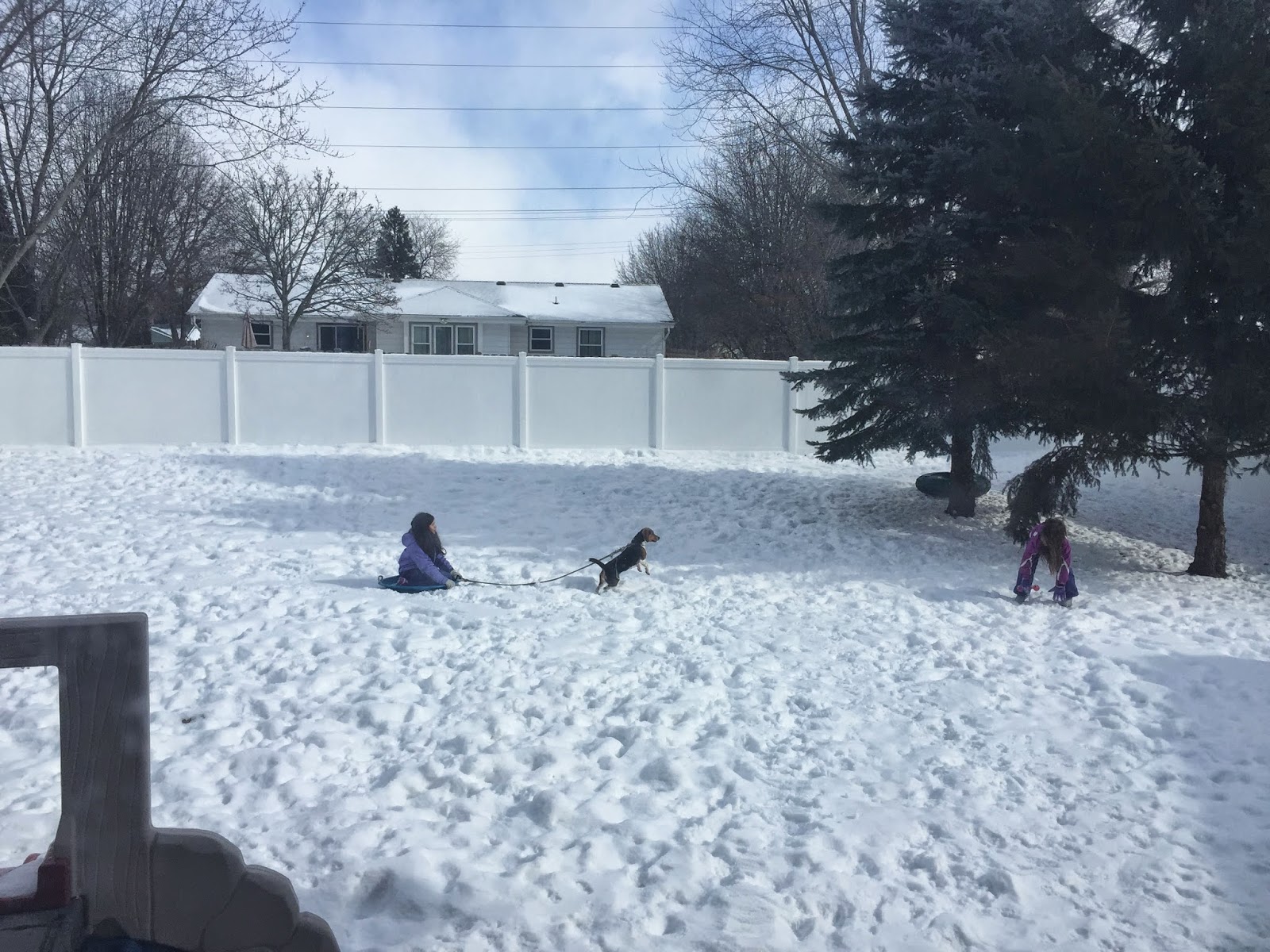 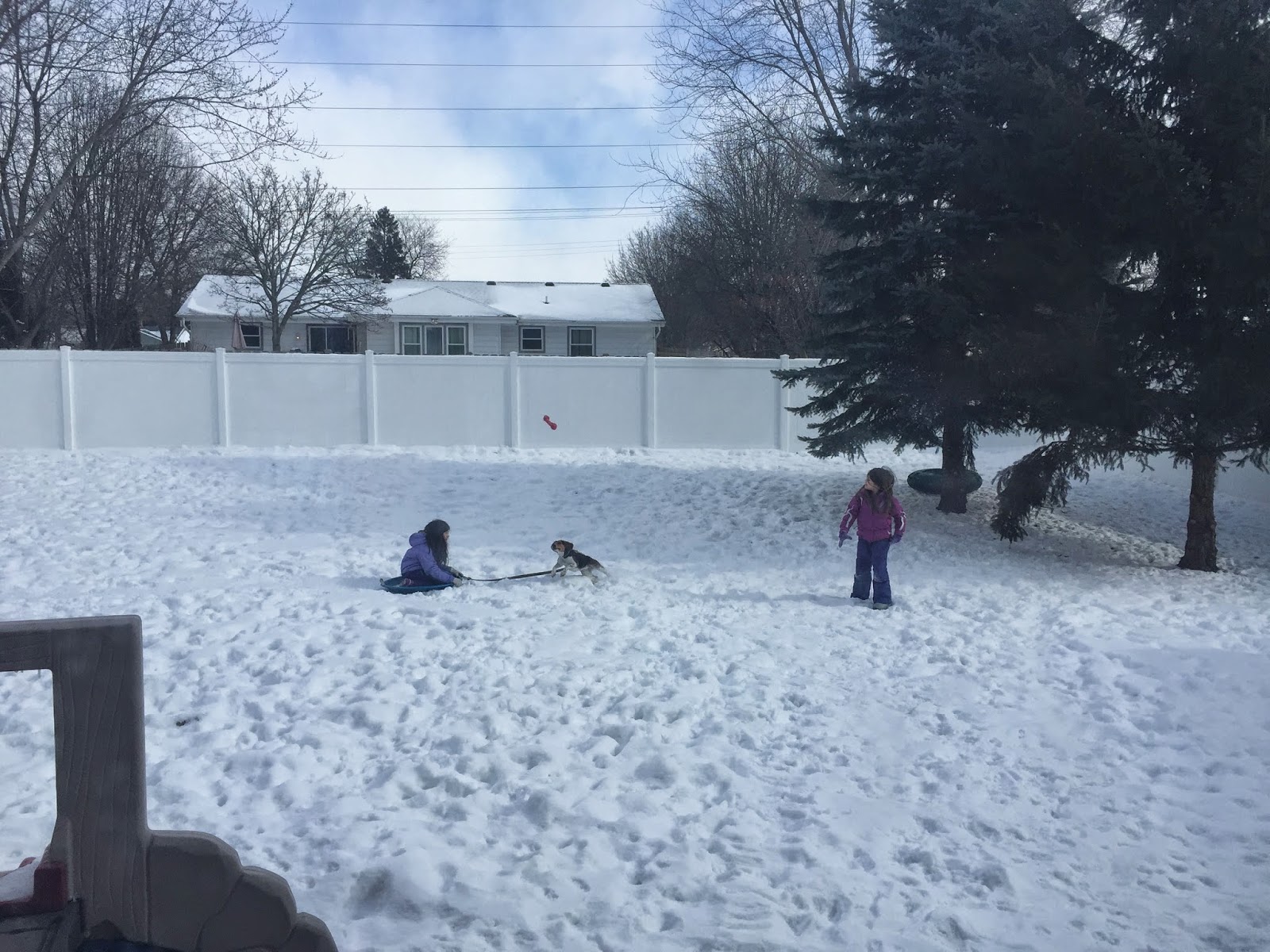 Thursday, February 19th
Thomas had his 4 month doctor appointment this morning. So despite this 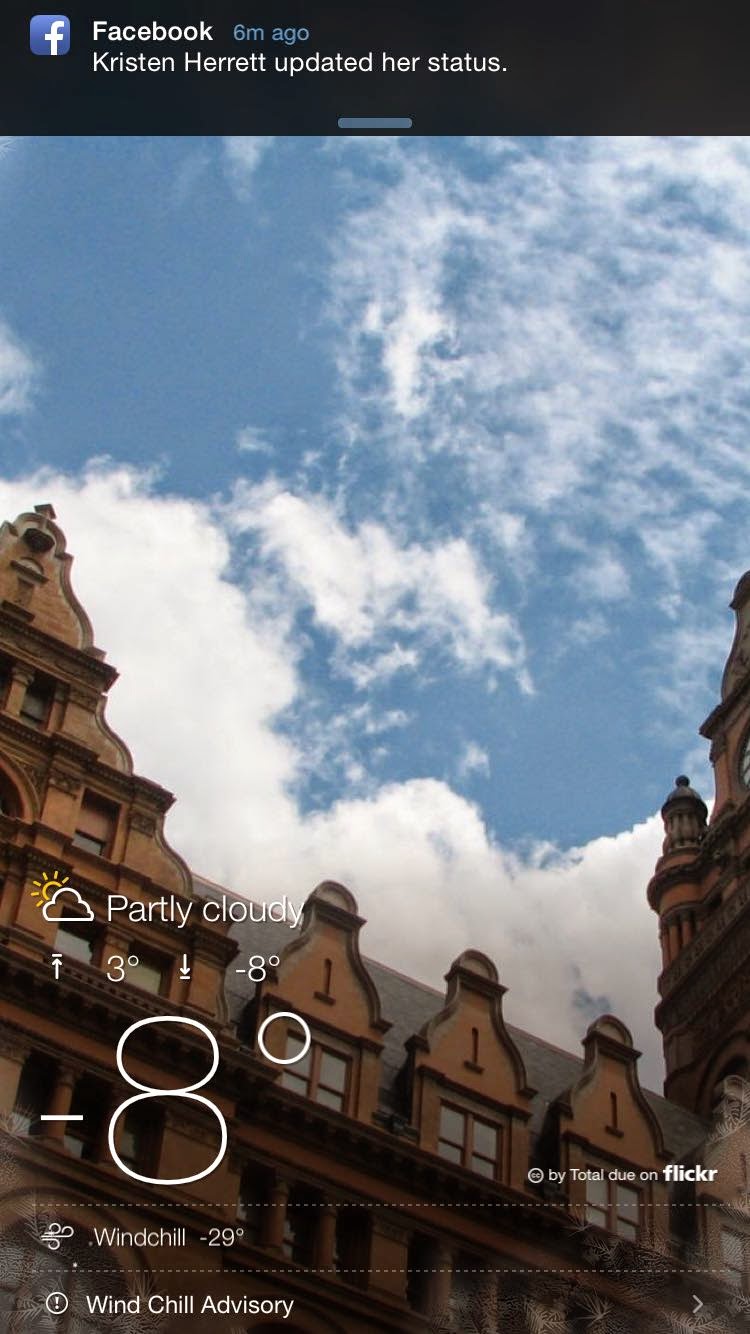 I bundled Thomas in multiple layers and under blankets and braved the cold. His appointment went well - we have an awesome Catholic, pro-life, father of 11 pediatrician and it was nice to chat and ask a couple of questions about the kids. Thomas got shots and then I ran to Office Max to pick up fasteners. After I got home I was able to finally finish my fabric/ribbon project: 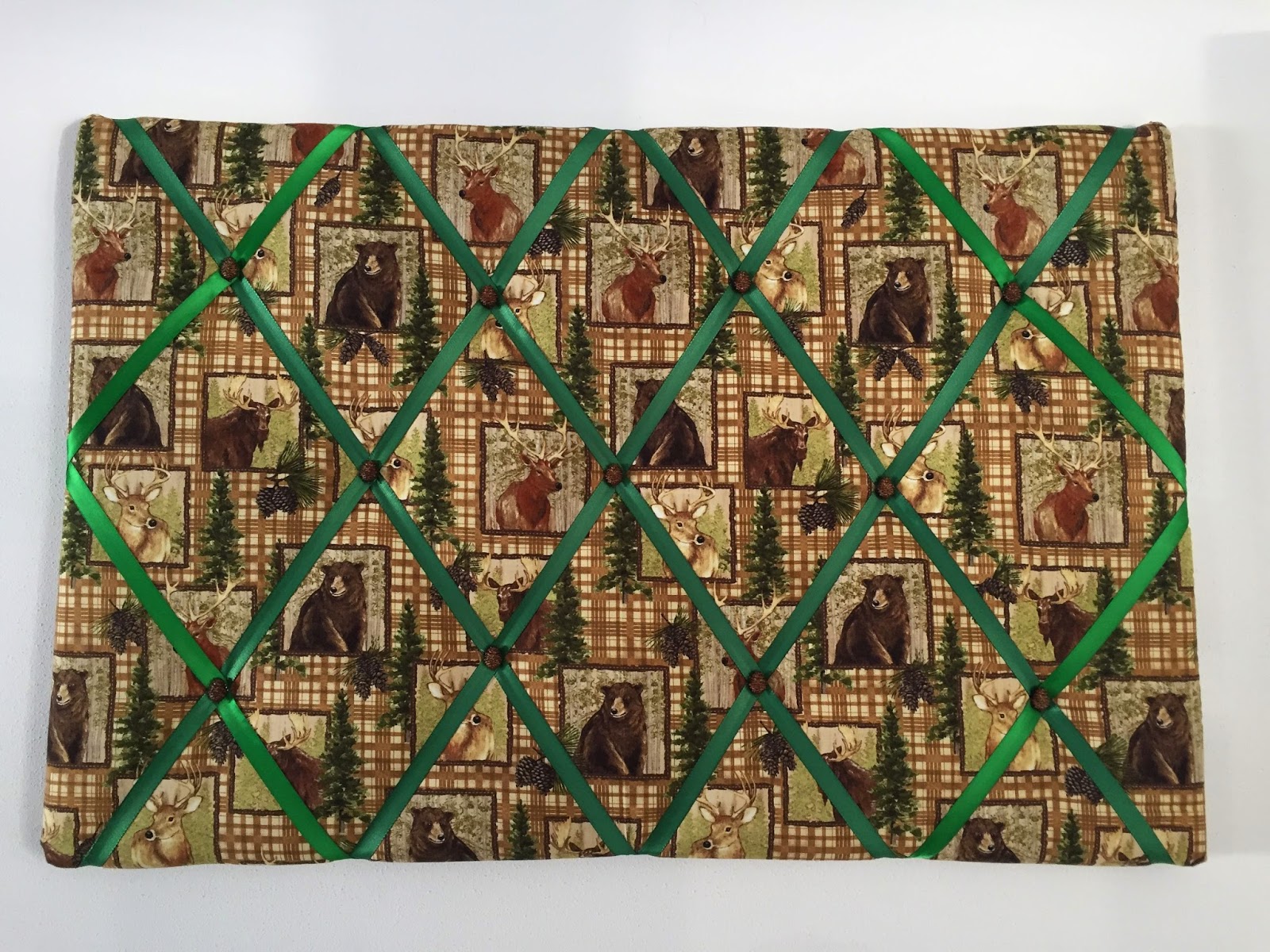 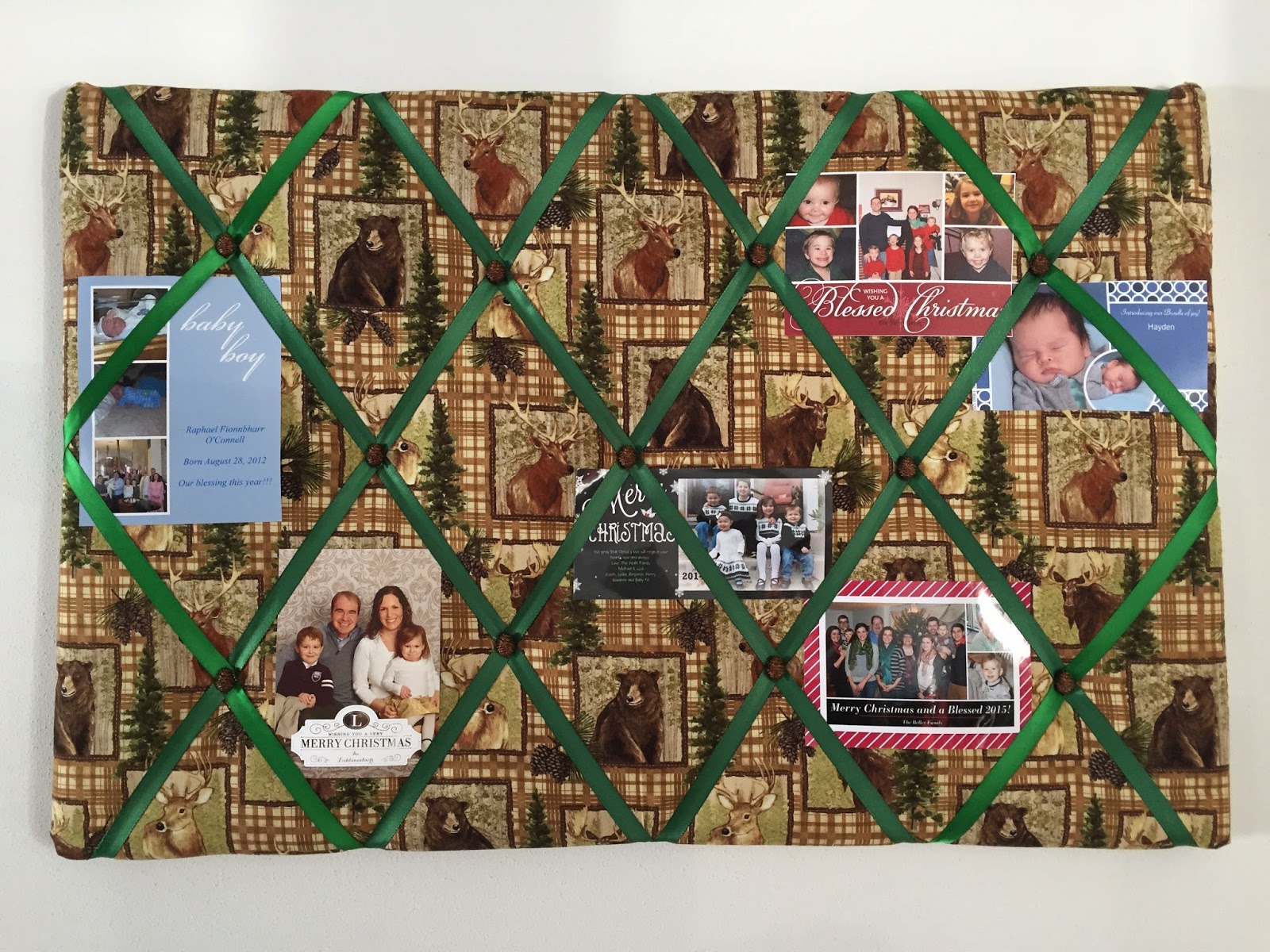 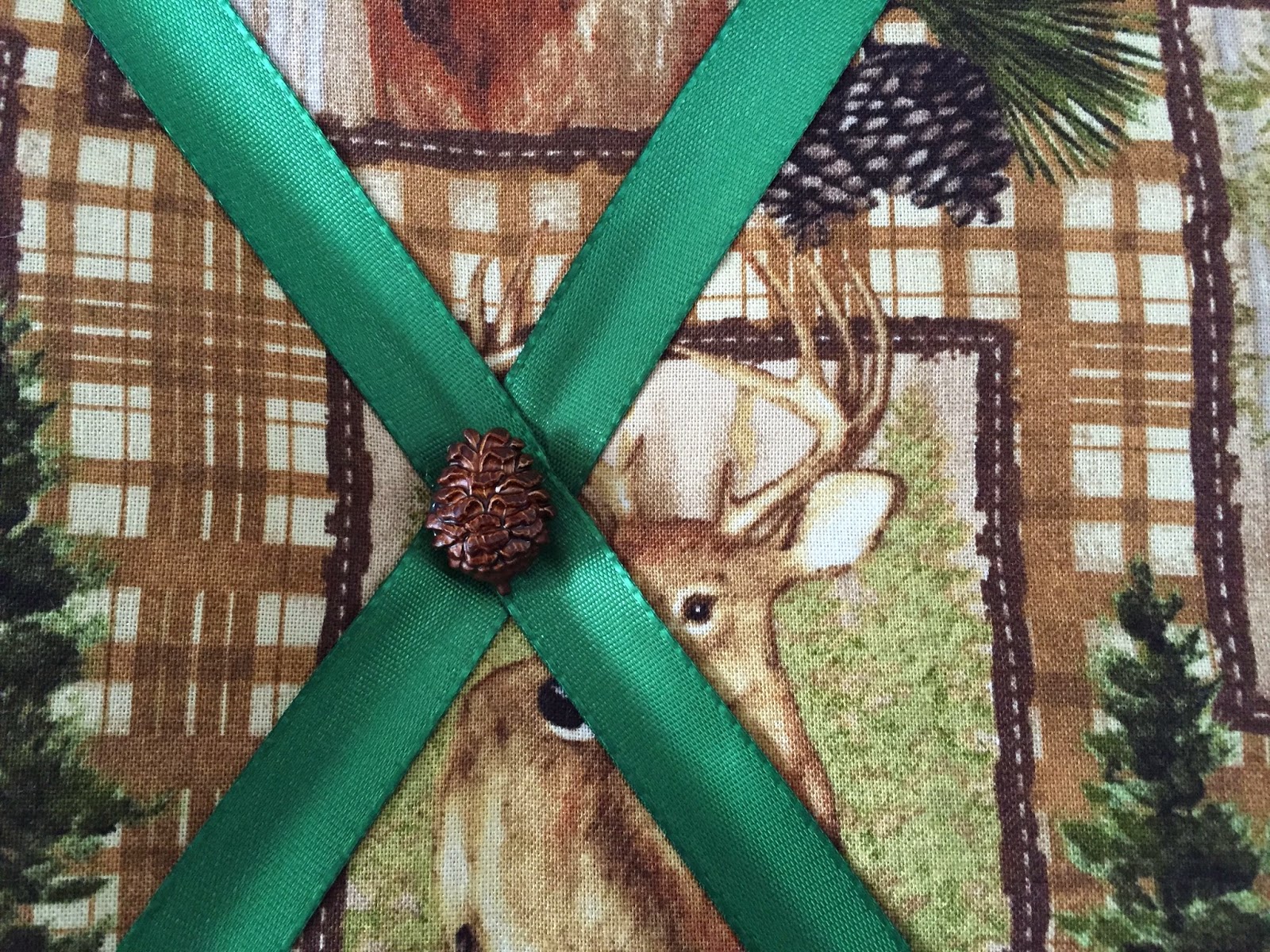 Ever since we got so many Christmas cards with pictures of family and friends we are now so far from I've wanted to find a way to display them for everyone to see, remember and pray for but in a way we could update easily as we get new ones. We have pictures of 4 of the girls' godparents and their families up there, one of our godchildren and one of our nephews. I'm hoping to add to it soon.

But before I went home again I ran to the mall. I had Five Guys (it has been years since I ate Five Guys fresh in the store hot off the grill and oh, my is it delicious!) and browsed a bit of baby boy clothes. It was then that I realized that the stores pervert boy clothes almost as much as they do girls. 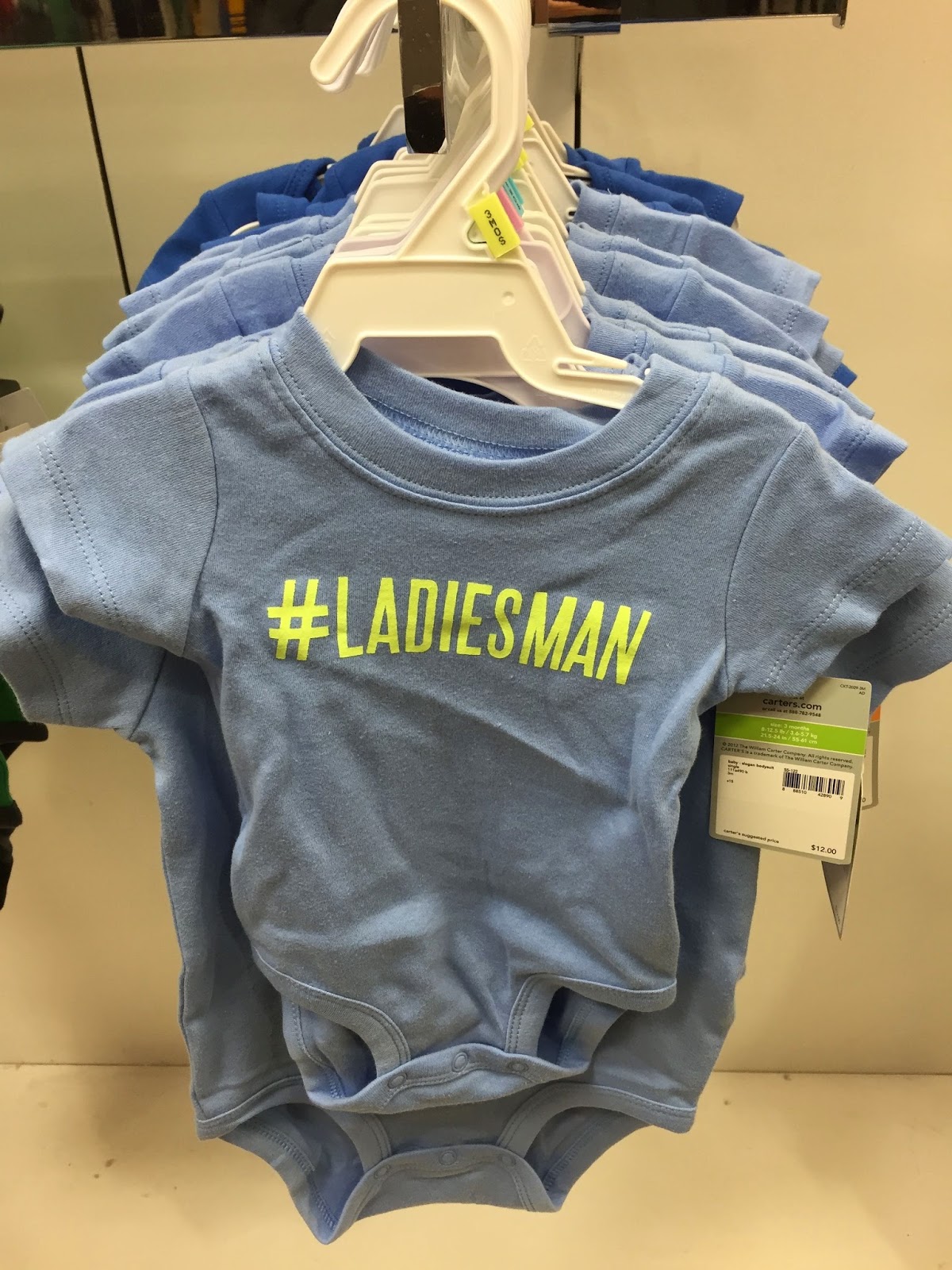 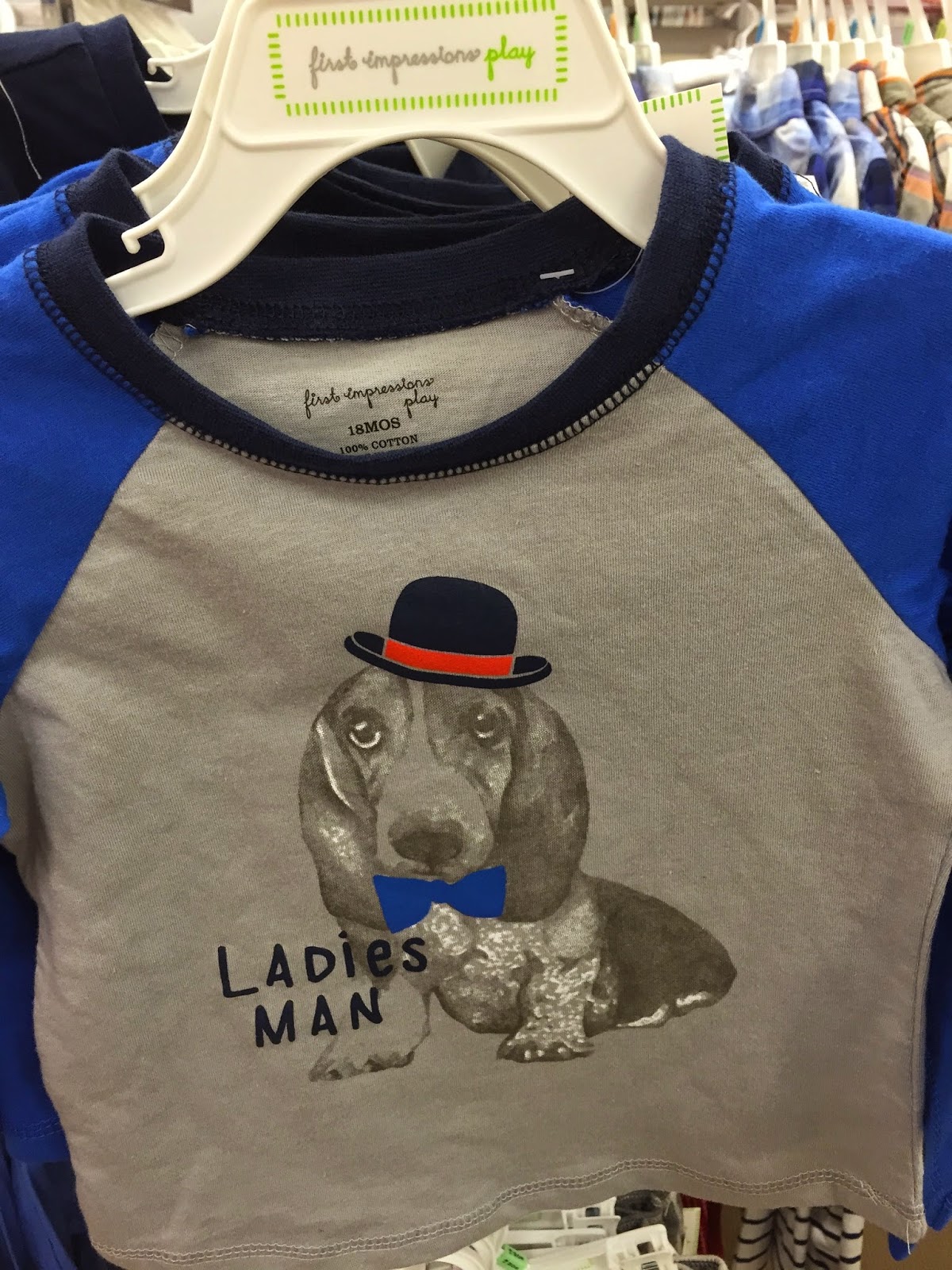 I just can't stand the idea of my sweet little innocent baby boy being labelled as a "Ladies man."

Anyway, we picked up some baguettes and broccoli cheese soup from Panera for lunch on Friday and went home.
Friday, February 20th
I had Cecilia and Felicity each work on their religious award booklets. Cecilia had to write about some of our family traditions and those who serve in our parish, etc. Felicity's was focused on the unique roles of each of our family members. I loved how when it asked for something we all do together and why, I figured she would say go to a movie or go to Disney World or go out to eat or something, but she chose that we pray together. She drew each of us in pencil with our initial above our heads. 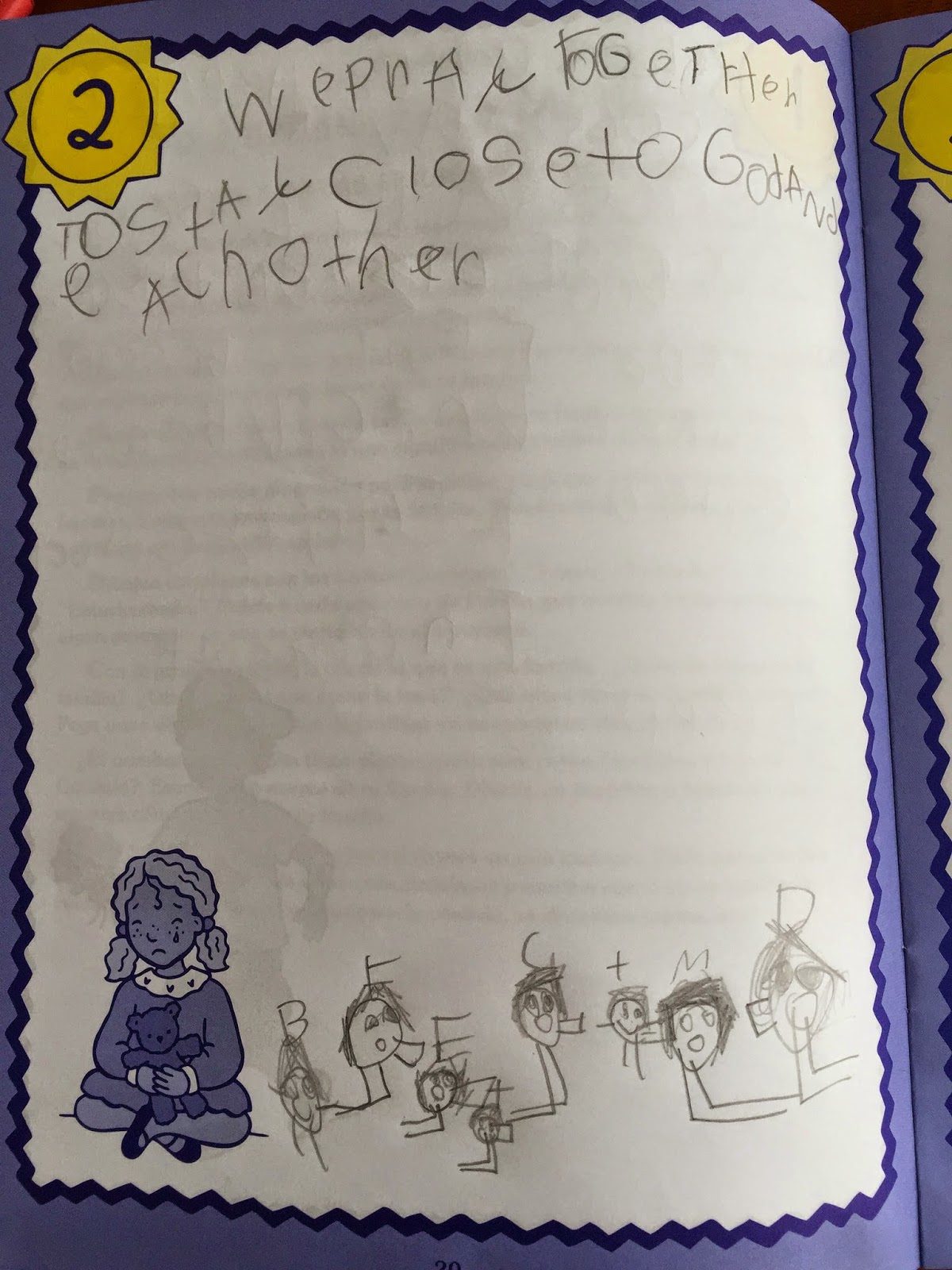 Thomas began running a fever during the night from his shots, so I made it a priority to get him some Infants' Tylenol and then a nice bath, for which he was due anyway. He isn't especially fond of his baths. He doesn't cry but he is tense during them and despises getting out and cold.
Once Thomas was down for his afternoon nap, I worked some on planning for next years' school some. I'm kind of blown away that, while she will only be in Pre-Kindergarten, Teresa is more than capable of beginning to learning to read, which means that I will technically be homeschooling 4 kids next year.
I also watched the bald eagle on her nest. I did keep the volume down though so as not to hear the wind so much but I showed the girls and they thought it was really neat. Every once in a while she gets up and takes off. She isn't gone long, so you have to be vigilant, but when she does you can see the egg and her wings and it is beautiful.

The eagle laid a second egg!