We got off to a good start getting the laundry started and off to gym class, even though the temperature was this: 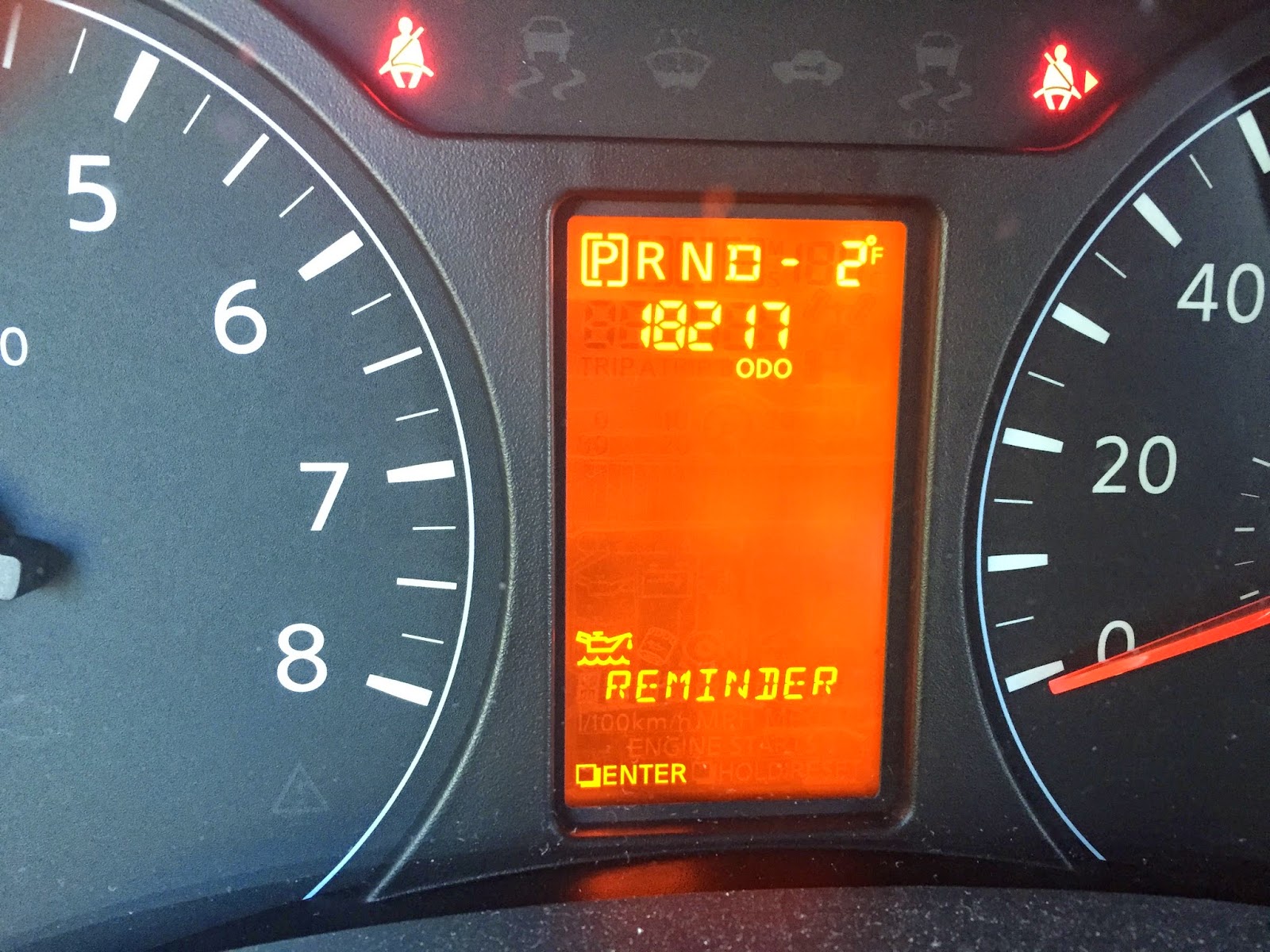 The older three practiced dribbling basketballs and some basic fitness while Thomas slept, Teresa played, I chatted with other moms and Brigid shadowed me carrying a cup of dry cereal.

After we got home and had lunch, I had the older three all do their geography, handwriting and some math. Cecilia did one math lesson, Felicity 2 math pages and Elizabeth 3.

From Melanie and Cammie, I got some great suggestions via Facebook on how to keep Brigid from pulling off her diaper, taught in camaraderie to her by Teresa.

And since I was saved cleaning up random pee spots on the carpet from Brigid, on Tuesday I said, Hey! Let's potty train Teresa! And so began the week of messes. She had only two successes the whole day and about a dozen accidents, but she was trying.

And, much to my surprise, all three of the oldest finished all their math for the week. Imagine my bafflement at it being only Tuesday and being done with math! Knowing next week is a "catch-up" week motivates them to get done like nothing else. In addition, Elizabeth did her Spelling as well.

The potty training continued. Wednesday she had 3 successes but the real progress was in the fact that one of them was #2. So, slow progress, but progress nonetheless. Meanwhile Cecilia, Felicity and Elizabeth finished their English and Spelling to be done for the week.
Cecilia got off to a rough start complaining her stomach hurt, but, knowing Cecilia's sensitive stomach, I knew that the odds were good if I could just get some food in it, she would be fine. Sure enough, after 3 ice pops, two buttered waffles and 2 bowls of rice with gravy, she was great and wanted to go outside.
After the oldest five went out for a bit of sledding and snow fun, I wasn't too surprised to see a tired Brigid like this: 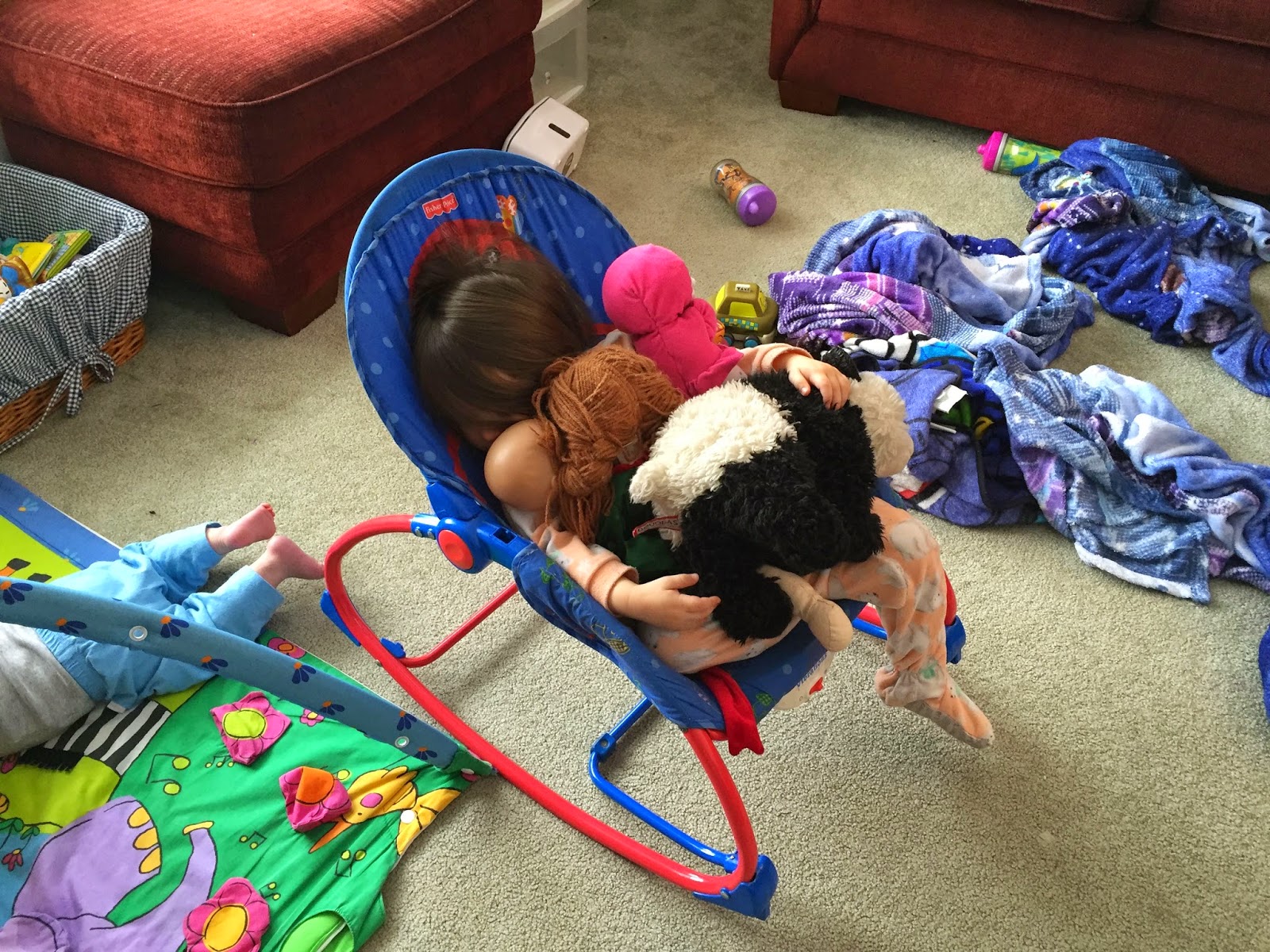 Brigid surprised us at dinner by eating 3 bowls of rice with gravy but around 9pm, while I was trying to get her asleep, it all came back up. I hoped that she had just overdone it and that would be the end of it, but it had just begun. I did get her asleep by 10pm but she was up throwing up again by 11:15. I sat with her for 3 hours while she vomited about every 15 minutes. It was painful. She didn't want me to wipe her face nor even touch her. She would hide under the blanket to avoid the towel (baby wipes brought on crying and screaming). She asked for her stuffed panda bear but it needed to be washed. She moaned and cried but all I could do was offer my presence.

Thursday, February 26th
At 2:15, Thomas woke to be fed, so James took over with Brigid and I went to nurse Thomas and get some sleep, although even that took until around 3am. I slept for about 3 or so hours before getting up for Teresa and Elizabeth and getting the older four breakfast. I was worried that, through the monitor, I could hear Brigid continue to wake periodically and throw up. Brigid is little. She is 2 years and almost 2 months, but she only weighs about 23 pounds. I called the doctor to ask at what point I should be concerned about dehydration. He asked me to bring her in then. Upon examining her, she had no fever, complained of no particular pain, weighed 21 pounds and 13 ounces and had an elevated heart rate of 144. She was diagnosed with a GI virus and mild dehydration. While we were waiting for her prescription of Zofran to stop the vomiting, she threw up again. But this time, at 10:15, would finally be the last time, after 13 hours of throwing up. The Zofran worked so well that she took right to the Pedialyte and wanted to share her sisters chicken nuggets and fries for lunch. She did have a little but even that she kept down. Although it was not long before the diarrhea began, at least the vomiting was over.

She continued to doze in and out and want me to hold her throughout the afternoon. I was initially supposed to go to a Mom's talk/retreat/social event that morning but God had other plans. That afternoon, while Thomas napped in his crib, and the older girls played video games, Brigid curled up on my lap and fell asleep. 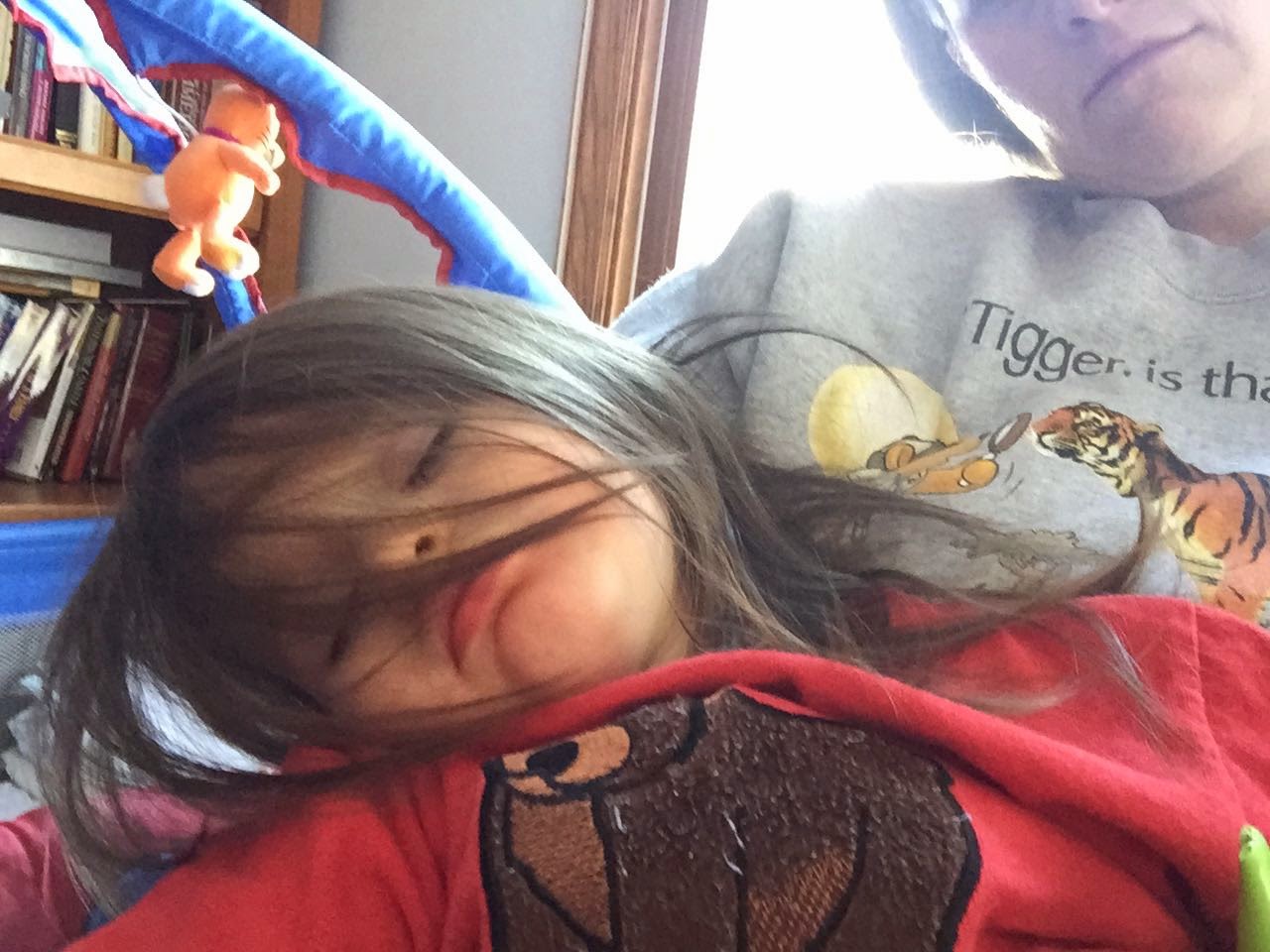 It had to be at gym because it was the only place she had been in a week. But I was glad to be able to hold my little angel when she needed me. She slept on me like that for about an hour. My little sleeping beauty, getting some rest she so desperately needed in the most comforting way.

A bath, clean clothes and some children's tylenol later, she felt asleep on the sofa. It was a really long day and James, Brigid and myself were all exhausted.

While I did get Felicity and Cecilia to work on the scouting religious award books, most of my day was focused on Brigid. I expected after sleeping for 13 hours, she would bounce back and I would have to work to keep her resting. That is what usually happens after a stomach bug. But this wasn't one of the quick ones. She asked for M&Ms and, though I negotiated her down to a strawberry pop tart, she kept falling asleep between pieces of it. 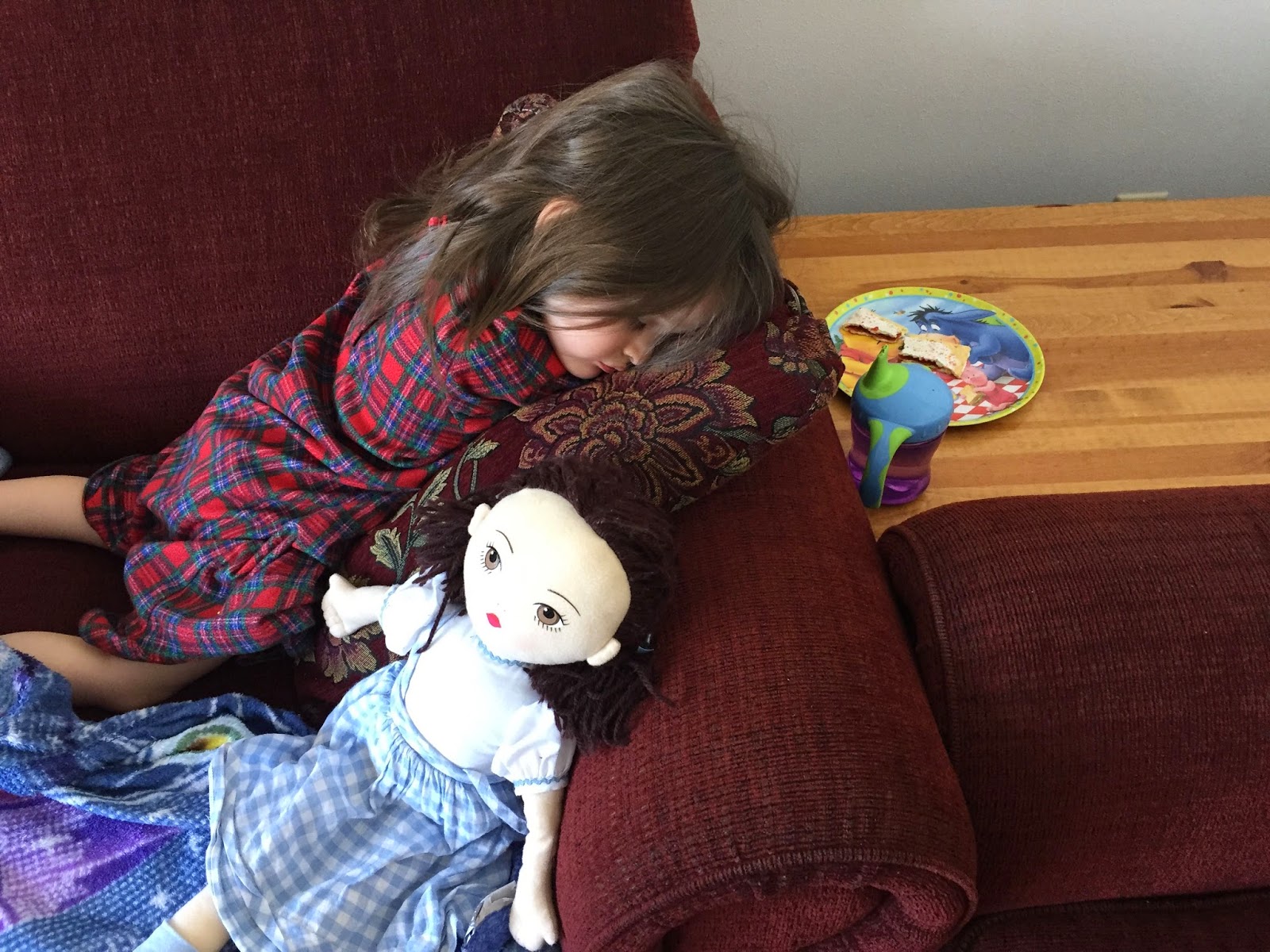 When I would move her to change her diaper, it was like carrying a fragile 21 pound doll. Her limbs would just hang and she was almost completely limp. It scared me. Not feeling well I could understand. But she is so tiny.* She doesn't have extra fat to burn. And even after 13 hours of sleep she struggled to remain awake. I called the doctor. Fortunately, he was more calm than I was and reassured me that as long as she was drinking fluids and, so to speak, moving things along, it was okay and to expect her to take a few days to feel better. She spent most of the day either sleeping, or looking like this: 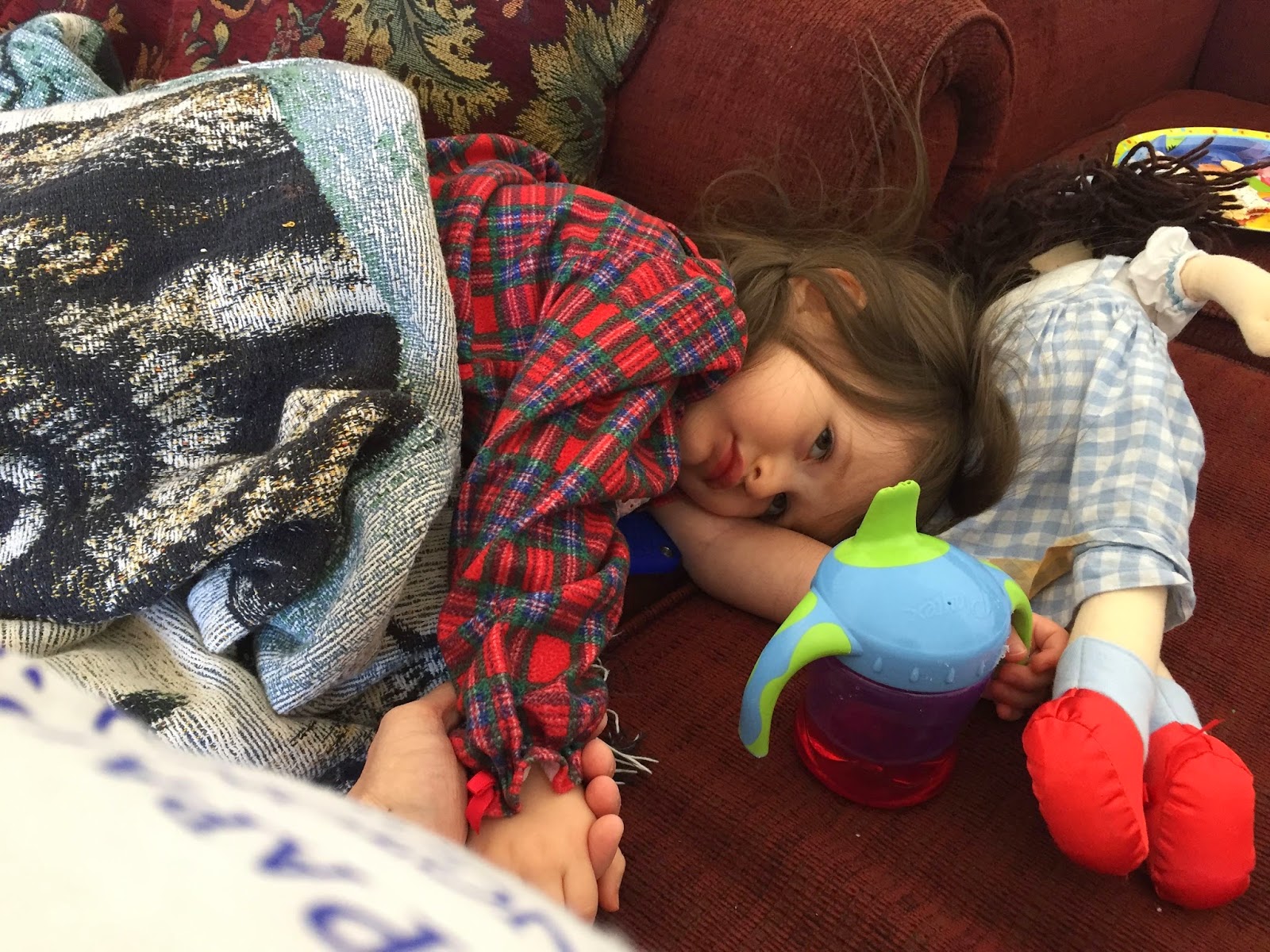 Fortunately she absolutely loved the Pedialyte cherry punch flavor. She downed it all day and night. 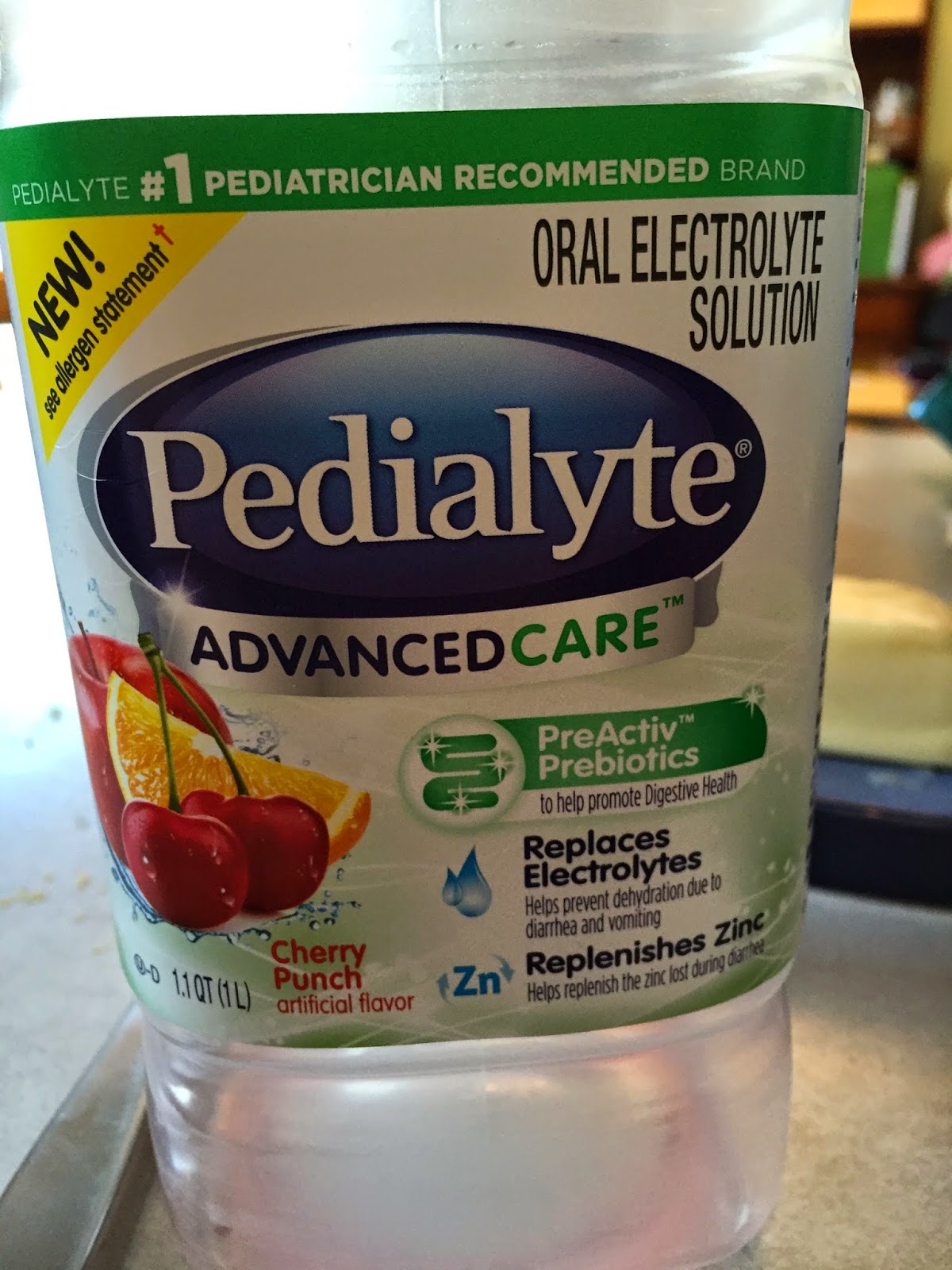 We had our family movie night and watched, at Elizabeth's request, Ice Age. But the devil is not easily dissuaded and he seemed determined to send us to the hospital this week. Out of nowhere, Teresa decided to stick a popcorn kernel up her nose. I didn't even realize it at first. I just couldn't figure out why she kept babbling about her nose. Then I looked up it and saw a popcorn kernel. She thought it was a bit funny. I was not amused. 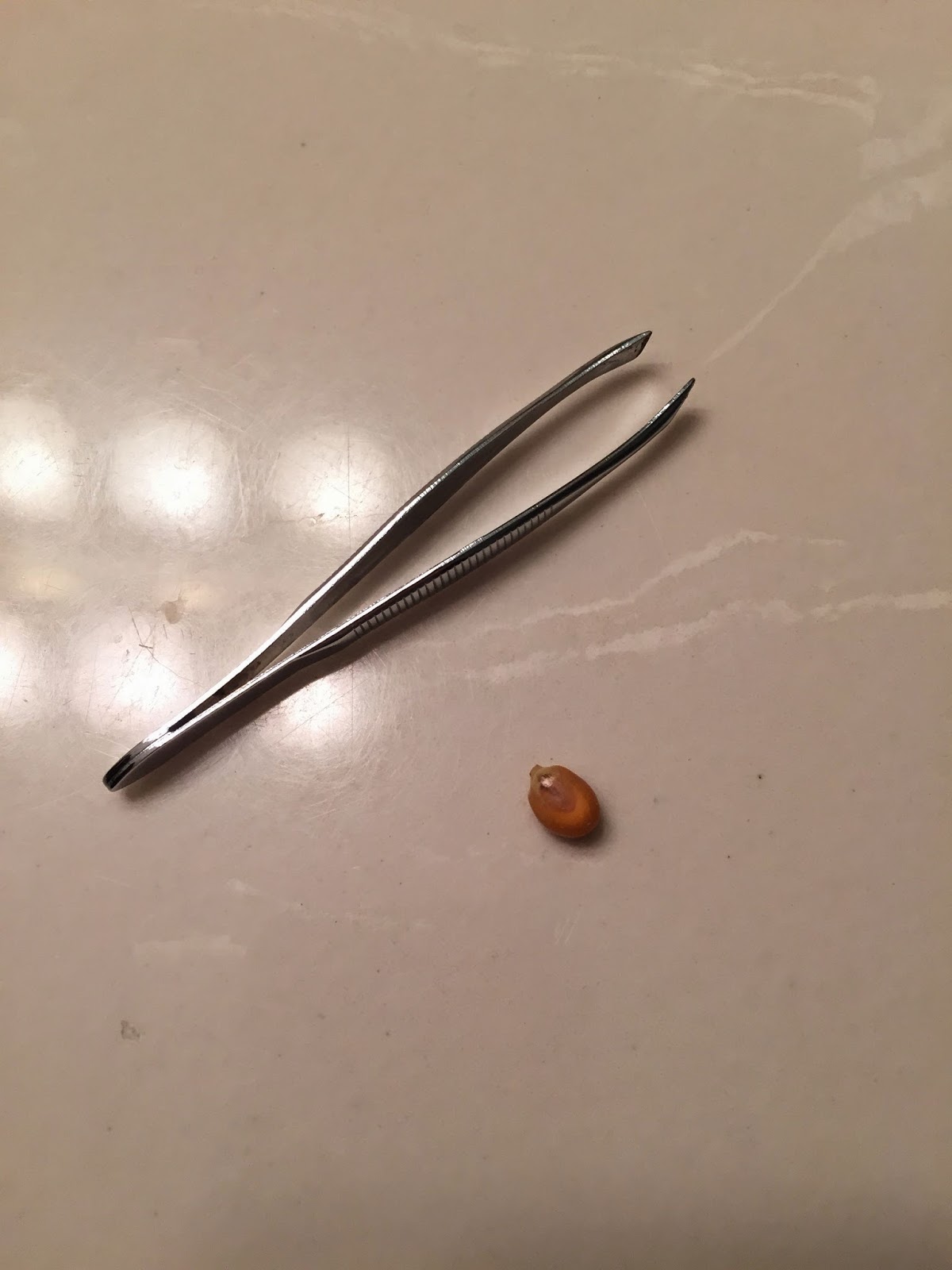 Fortunately, sparing you the details, we did manage to get it out without going to the hospital but we did have a little teachable moment for anyone able to understand that we simply do not put anything up our noses.

James took Cecilia, Felicity and Elizabeth to their American Heritage Girls Daddy-Daughter Dance but before they went, we had to make a food to bring and share. So the four of them made homemade pretzels together: 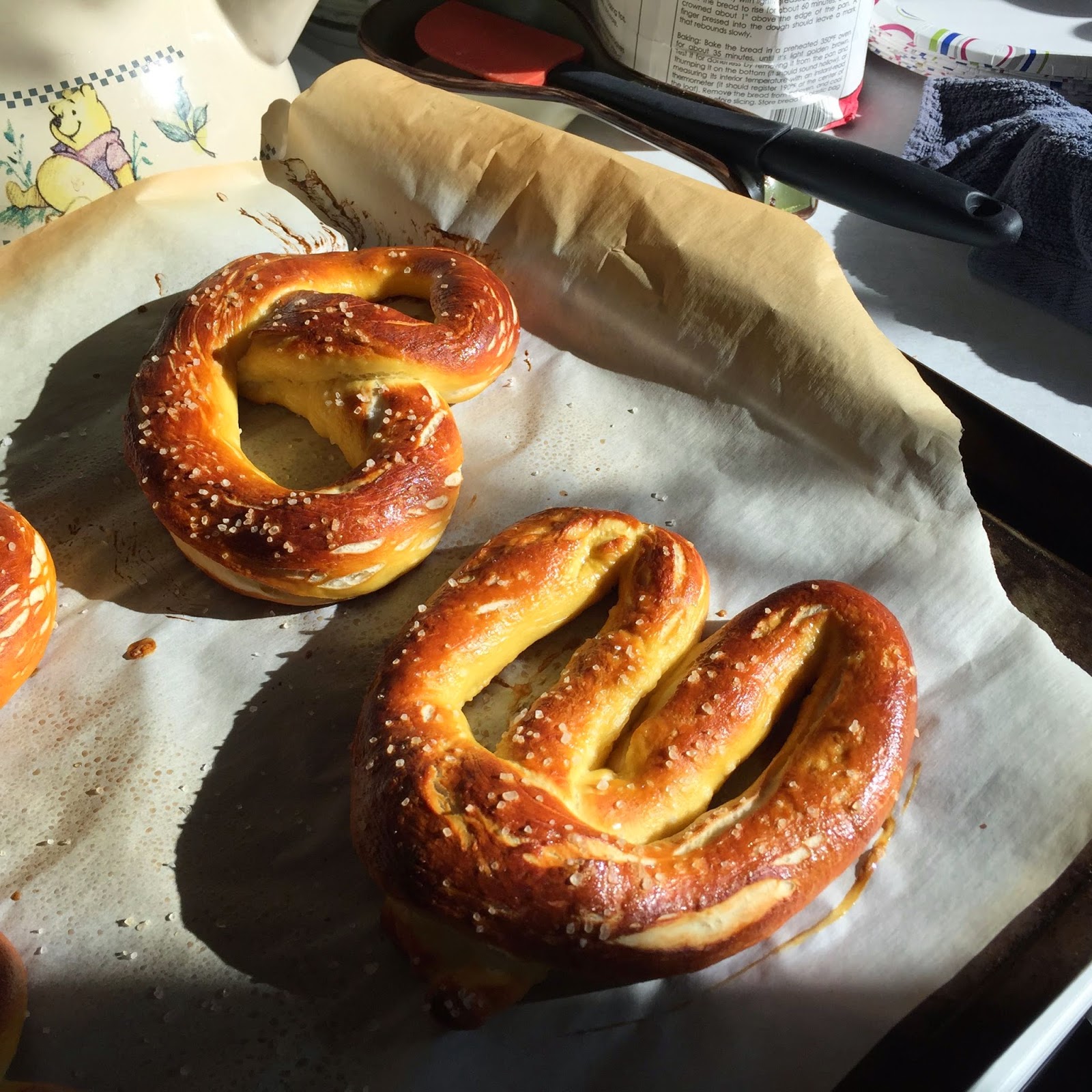 They turned out really well and were delicious. Understandably, there were none leftover after the dance but the girls had a good time.

Long story short, she finally stopped throwing up about 13 hours later, around 3am. None of us will be making it to Mass today but that's okay. I plan on going over the readings myself later and we will just make our own Lenten sacrifice here from our domestic church. As both girls are now in the second stage of this evil virus**, we have renewed hope we can hold it to two girls. We've spoken with the older three about washing their hands often especially right now, not drinking from anything their little sisters drink from, sharing their food, etc.

Brigid got up around 9 this morning and is improving but very slowly. She will get up and walk a bit but then she lays down and just lays there. I found her in the playroom on the floor just looking at the ceiling. She had gone in there to play but got too tired. We will be making full use of any and all electronic devices for the next few days if it helps keep the little ones in one place resting.

Fortunately we are all on Spring Break this week. James still has work to do but we are in the clear for school work. We will see if we can make it to our AHG meeting on Monday but it will depend on who/how many are sick. Certainly don't want to share this one.

More Learning Notes (but hopefully more sanitary ones) at Melanie's :)

*This is a picture from a week ago of Brigid holding Thomas. She is almost 26 months old. He is 4 months old. They are only about 8 pounds apart when she is healthy, even less at the moment. She wears Pampers Cruisers size 3; he wears Pampers Baby Dry size 3. So she is little and, unlike Thomas, really doesn't have much baby fat to spare or burn through. 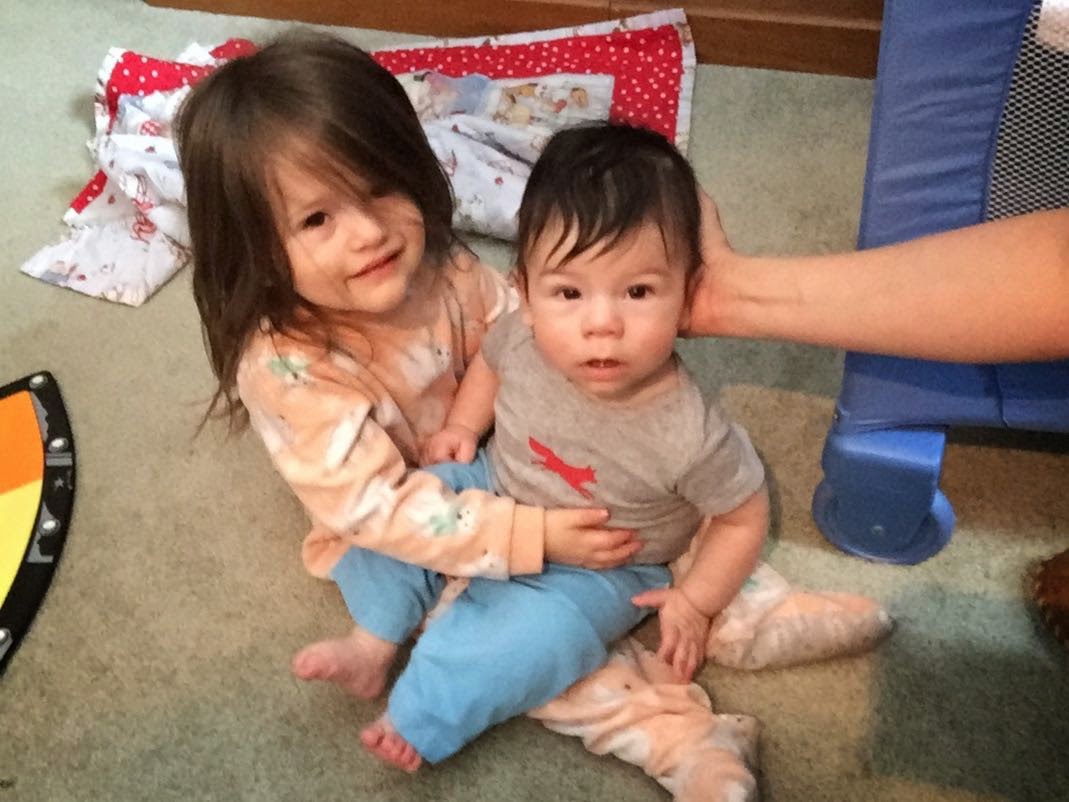 **I was saying to James before this thing hit Teresa, I think viruses had to be a creation of the Fall. When sin entered the world, so did the deprivation of health. They are parasites sucking life from their hosts and hence, I call them evil.