It seems like so long since I wrote a Learning Notes post. We did take off for Holy Week and Easter week. And then the kids got hit with another cold just as we tried to get back into school this week. Sigh. Too many viruses. I haven't had much in the way of a cold, but my sleep has been awful with all the sick kids. It didn't help that the previous Thursday and Friday we saw a lot of rain, so much that our backyard looked like this: 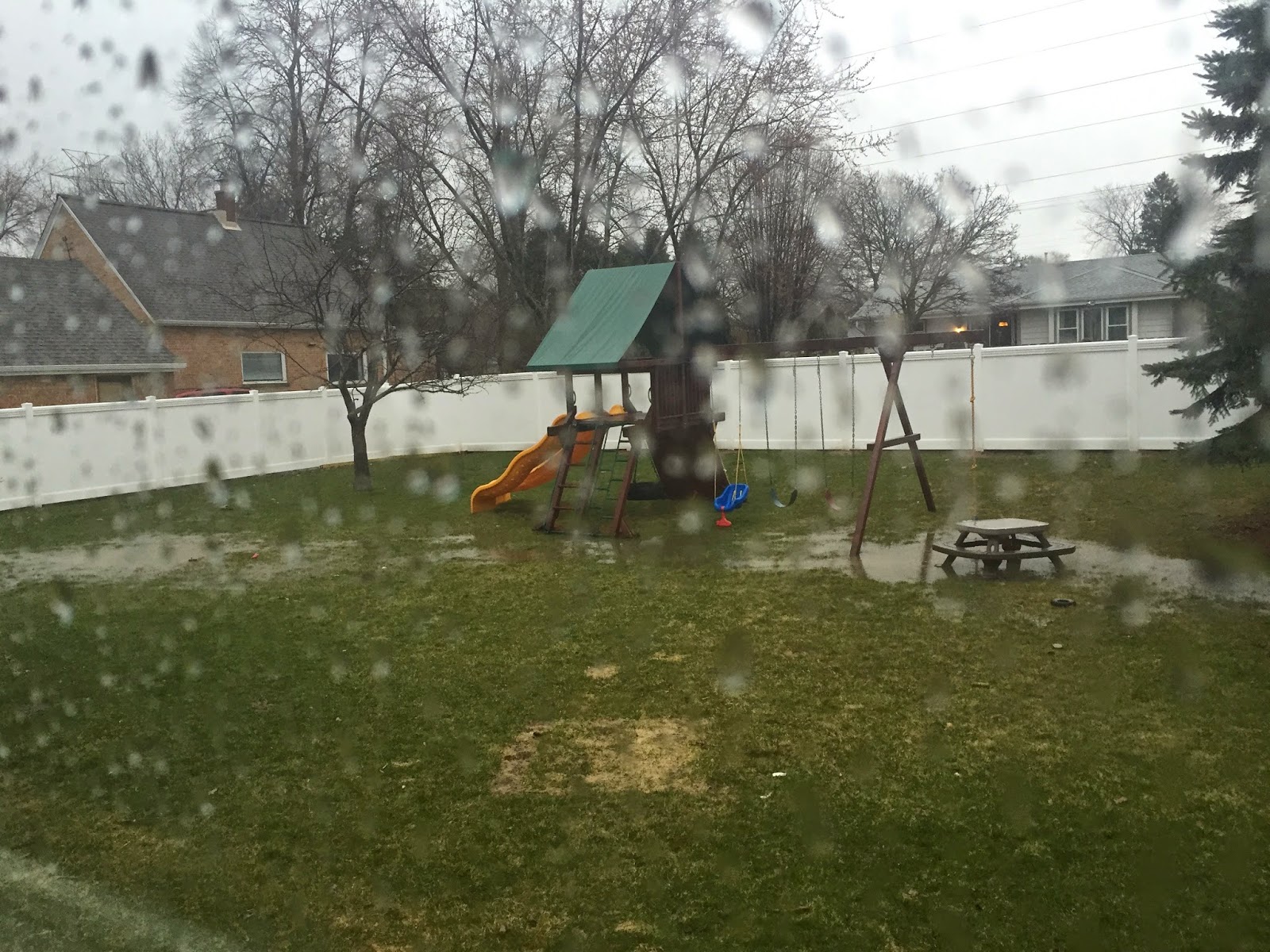 I'm wondering how frequently this happens and if there is a way I might be able to make it drain better and faster. 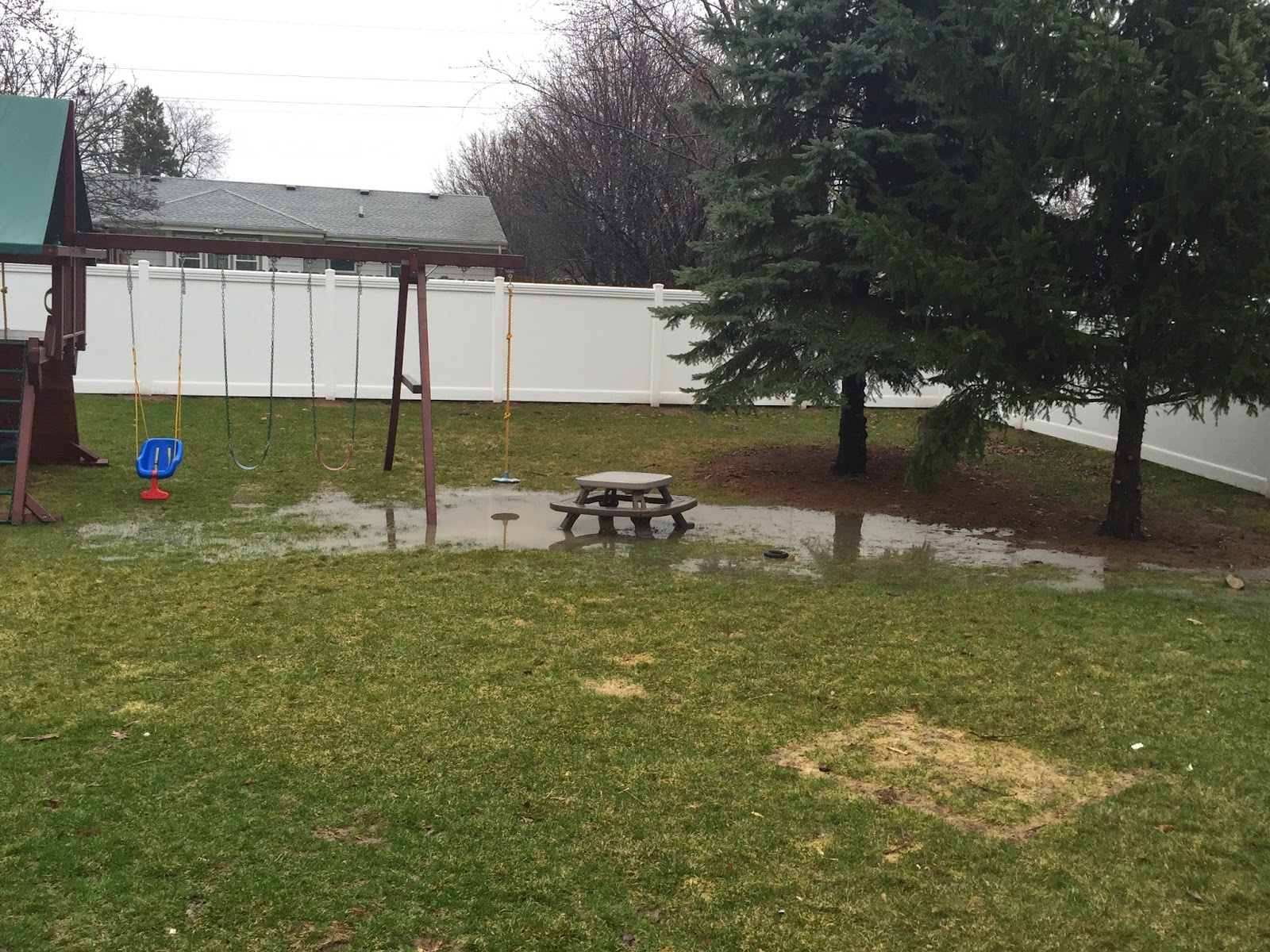 It took a couple days afterwards for the kids to be able to play over there. 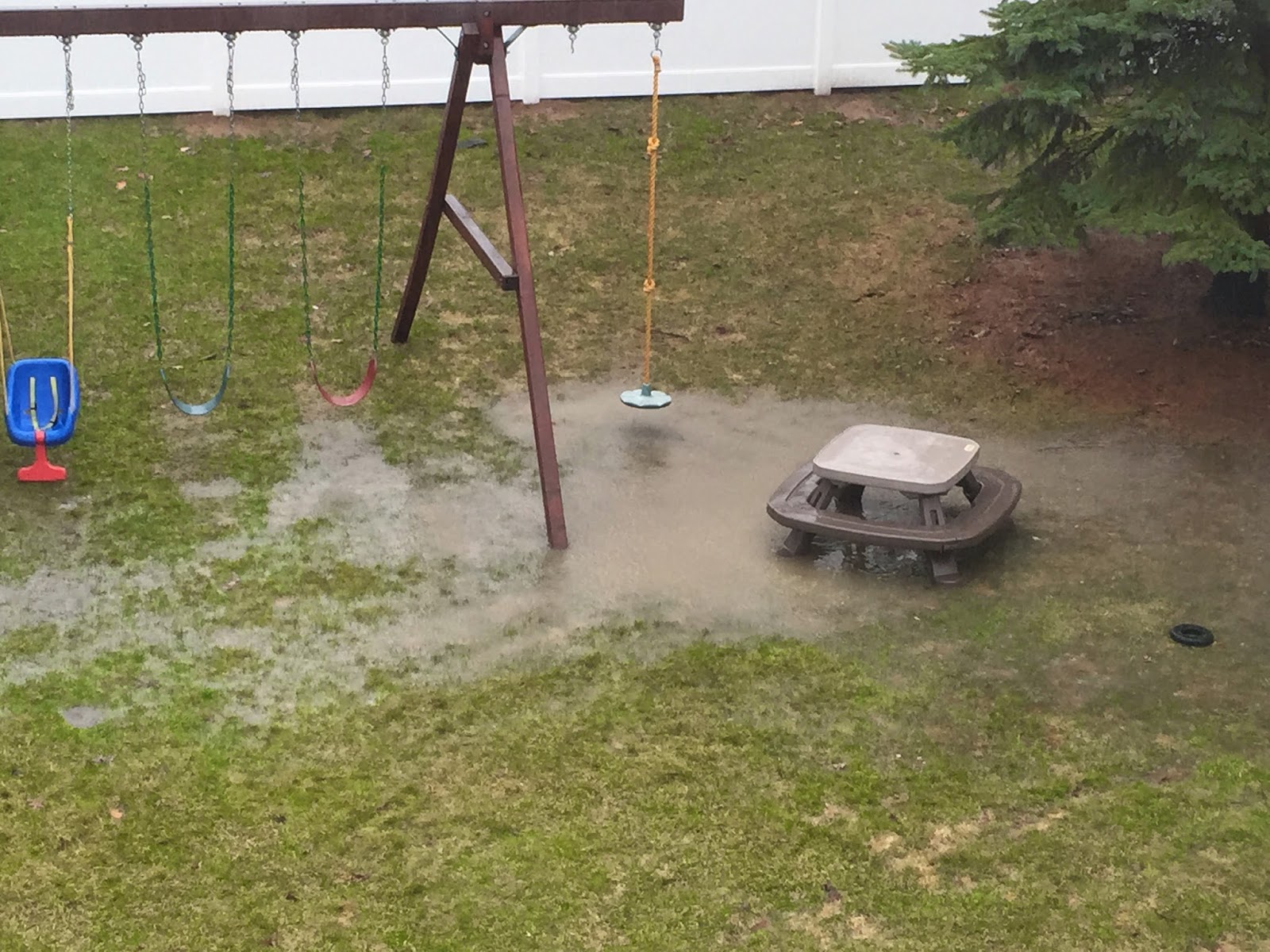 So it made for some grumpy, sick kids to have more rain on Monday.

Monday we were going to go to the zoo, but our colds and the family we were going to meet there 's colds and the rain postponed that. So Cecilia got done her geography, handwriting and a math lesson. Elizabeth did half of her math for the week and Felicity did her handwriting and a few pages of math. By the afternoon I was exhausted and the kids just played while I rested. I bribed the kids to help clean up a bunch with promises of watching Honey, I Shrunk the Kids, which they had gotten a glimpse of playing Disney Scene It with me on Sunday. I had a doctor appointment that afternoon (I finally have a doctor for myself - yay! and she is pro-life! double yay!). My back has been hurting off and on for a few months now. I really liked her though and I think she nailed it. Back muscle spasms totally explains why it feels the way it does and why I couldn't decipher a pattern to it.  My prescription is for 800mg of ibuprofen 3x a day, a heating pad and back massages. Nice, huh?
Unfortunately Tuesday didn't get off to a better start. Cecilia got up around 3am throwing up and every kid had the cold except Felicity. I got Cecilia to stop throwing up (she has such a sensitive stomach this is not uncommon when she gets a cold but I can generally slow her down with an ice pop and then get something bready in her and she stops and just becomes ravenously hungry) and helped Elizabeth finish her math for the week. Felicity got a few more math pages done and by the afternoon Cecilia was feeling well enough that she did all her english for this week and next.

The weather improved so that they were all dying to get outside. Out front riding bicycles, the backyard on swings and slides or shooting squirt guns and bathing plastic animals... the amount of outside time is picking up and they run in and out a lot throughout the day.
By Wednesday the runny noses were in full force but sunny and 50s drew them all outside for most of the morning. Breaks of outside time included a VeggieTales video for the littles and some spelling and math for the older ones, but they couldn't resist the backyard long. They even spent some time out front riding bikes or the plasma car or another ride-on toy. In the afternoon, Cecilia finished her Spelling and Math for the week. Felicity finished her math and Spelling for the week. And I showed the older girls the film The Flight of the Navigator. They were tickled that the alien is played by "Peewee" and I had forgotten how awesome the music to that movie is. I wish more than one song was available to purchase.

Thursday, Felicity and Elizabeth finished their bookwork for the week. It was Cecilia's patron Saint's Feast Day as well as her Baptism Anniversary. So we celebrated with some Five Guys for lunch. And the girls spent the afternoon playing some video games but also playing outside quite a bit. 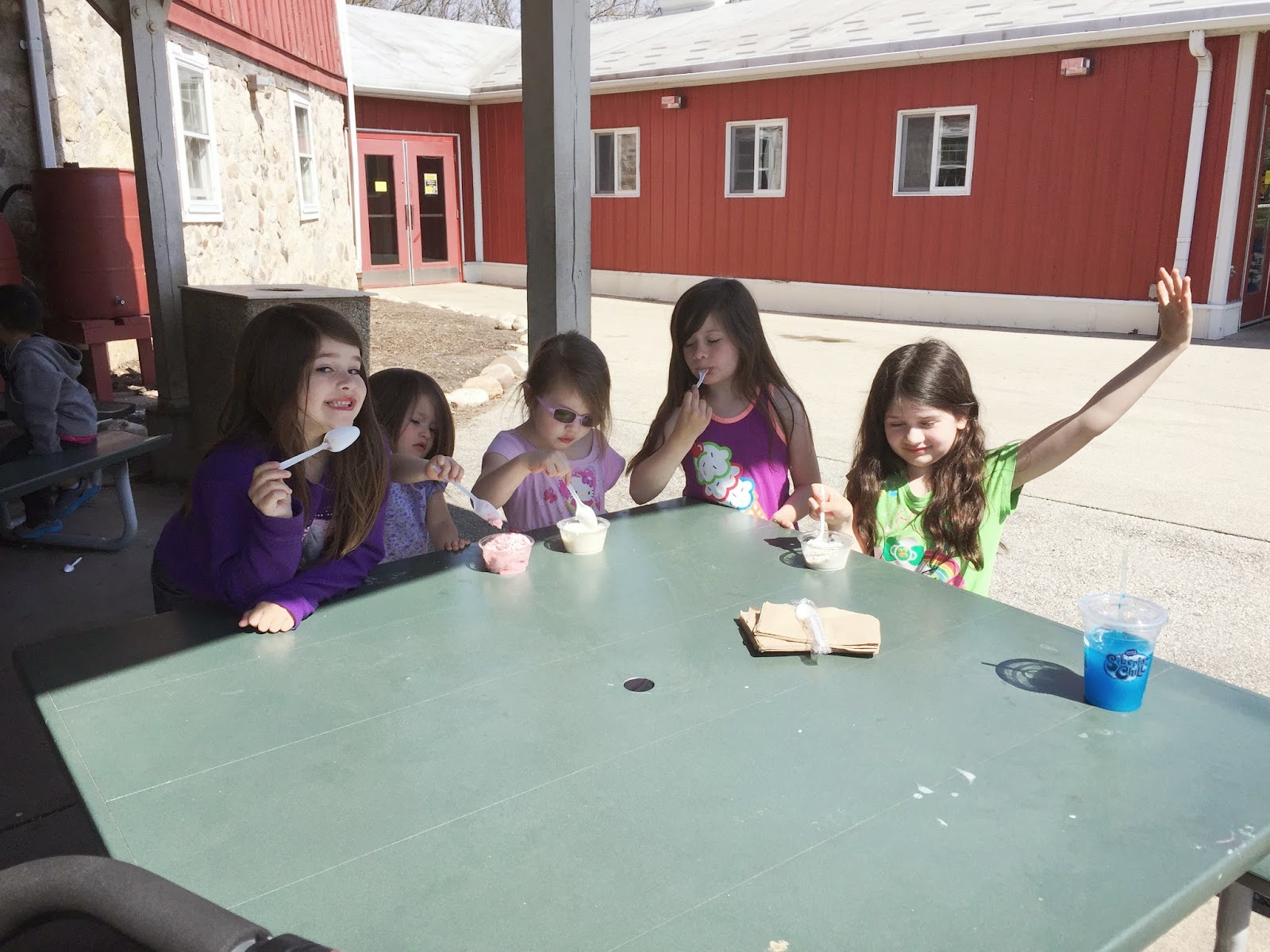 Friday we were supposed to meet another family at the zoo but they were hit by the same cold we were but harder. So they weren't able to go but my kids were so excited to go, I took them anyway. All 6 of them. By myself. For about 3 1/2 to 4 hours. 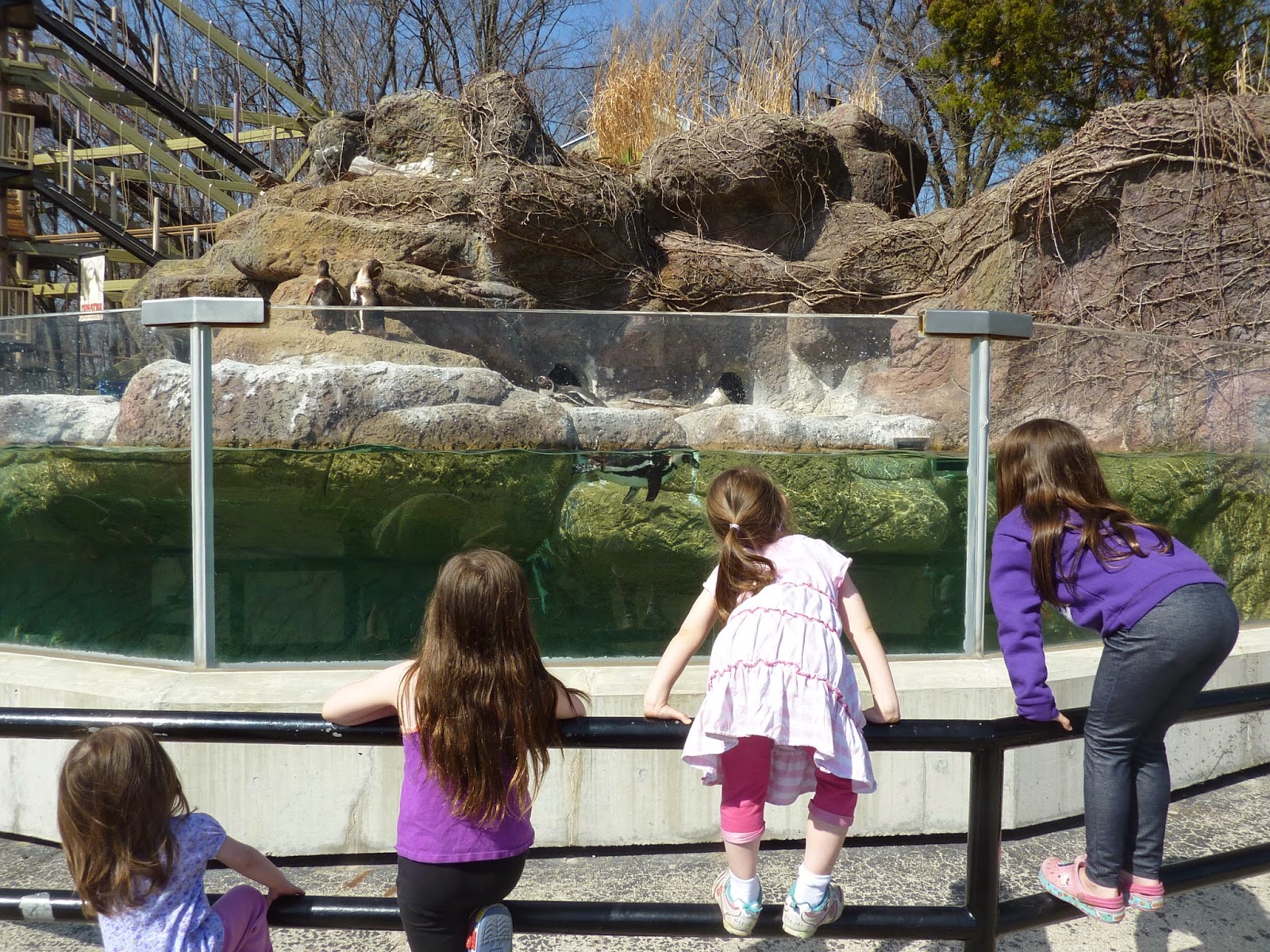 The outing went well and the kids had a lot of fun. After greeting the penguins at the entrance, we went to the farm and saw cows, had ice cream and played on the playground. It was quite crowded though, so I did try to move thing along... trying to watch 6 kids across 2 playgrounds when it is crowded isn't easy. 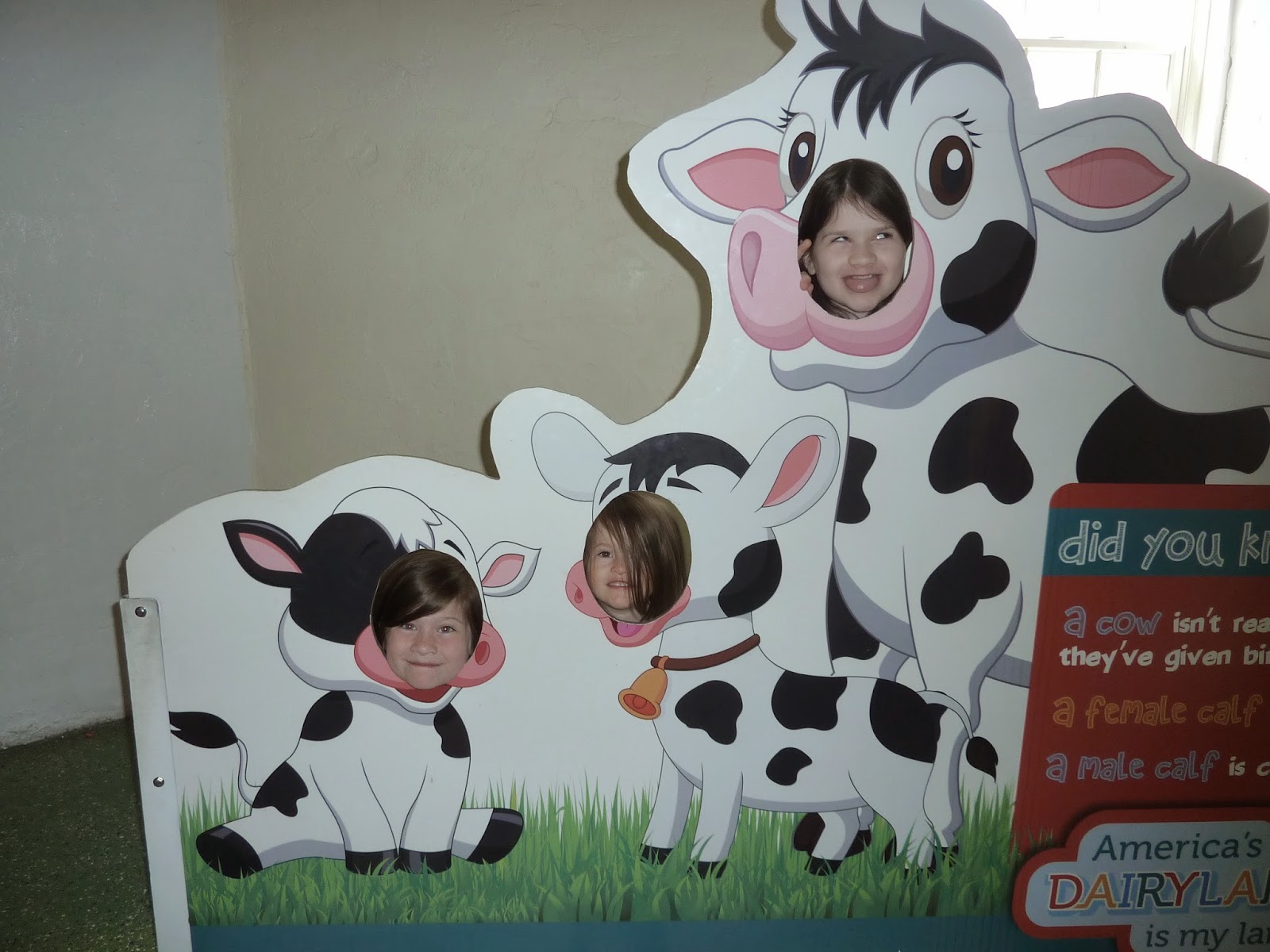 Teresa adores giraffes, so we went there next. None of the girls were happy that the hippos were still MIA, but they enjoyed the tigers, jaguars, lions, red pandas and rhino. 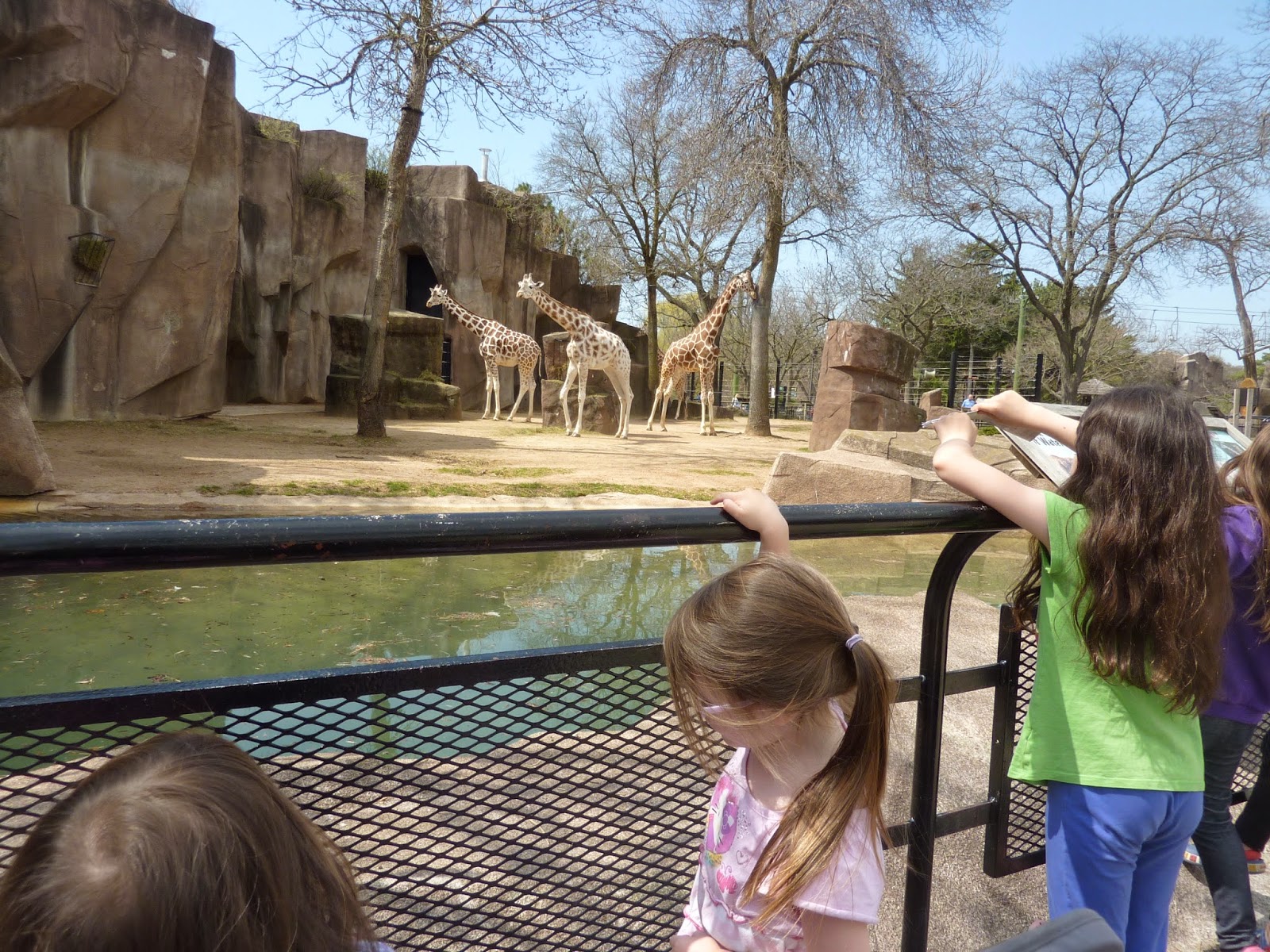 We finally got to see the polar bears, who were MIA the last time we came. Cecilia really loved seeing them. I only lost Teresa once (!) when the lake apparently held more interest than the feeding of the seals. In fairness, there was a trumpeter swan nearby but threats to buckle her in the stroller if she didn't stay with us proved effective after that. 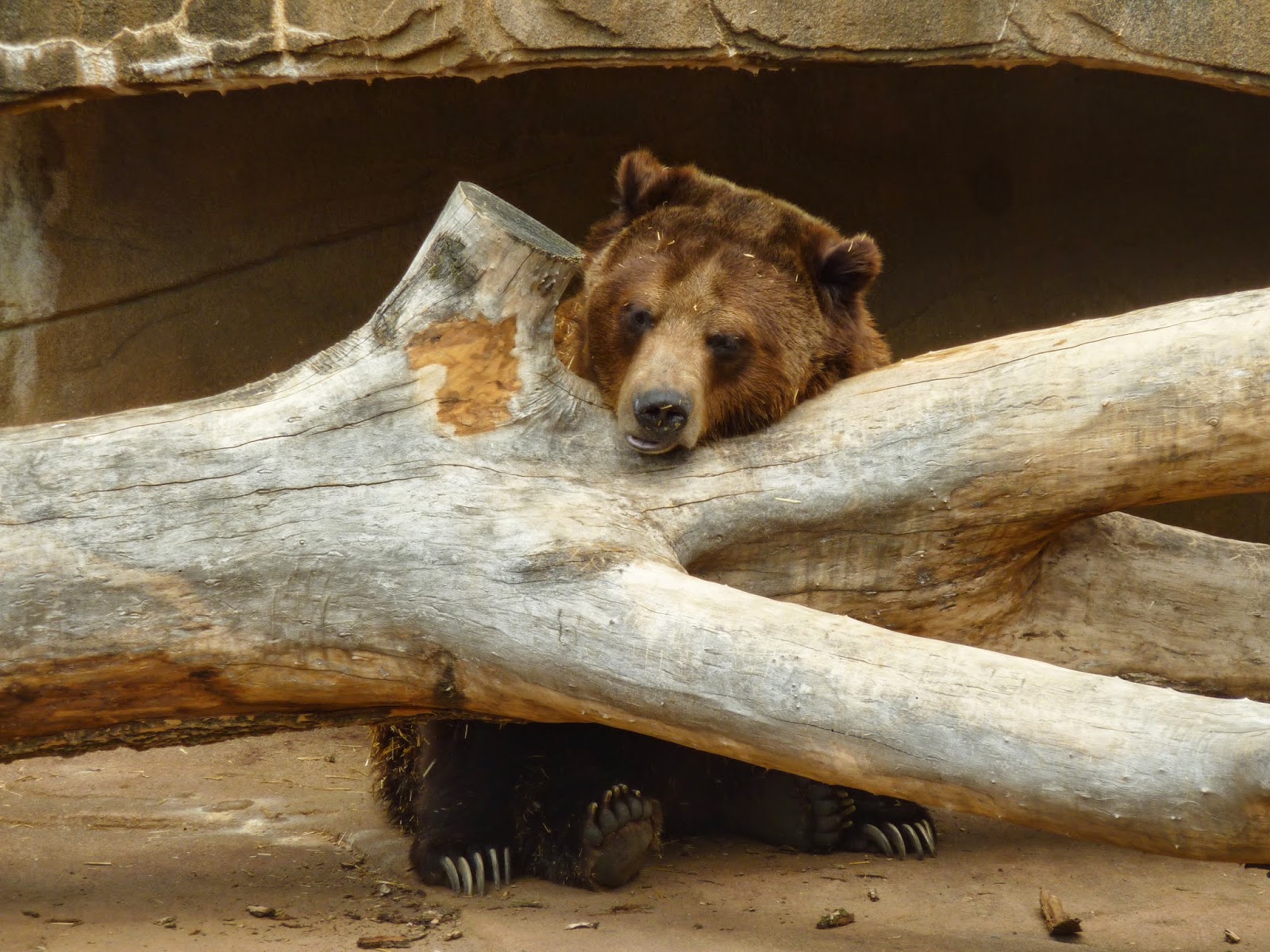 We had a snack of nachos and popcorn before seeing the black bears, elk, grizzly bears and caribou. Teresa and Brigid had a disagreement about the grizzly bear. Each insisted it was their grizzly bear. They were gorgeous though.
We visited the small mammals and nocturnal animals house and then the building of snakes, reptiles and amphibians. We swung by the flamingos before visiting the gift store. Felicity got a multicolored pen (again, my girl who lives to color), Cecilia got a polar bear shirt, Brigid got a plush grizzly bear, Teresa got a plastic elephant and giraffe and Elizabeth got a few lollipops.

It wasn't a bad week, despite the rain and colds. It did wear everyone out though.
Saturday James had to attend the ordination of the deacons, so we took the opportunity to get a nice amount of cleaning done. Cecilia cleaned the toilets, bathroom floors, her and Teresa's bedroom and the books in the playroom. Felicity did the bathroom countertops, picked up and vacuumed the hallways, helped clean the playroom and helped clean up her, Brigid's and Elizabeth's bedroom. Elizabeth helped clean up the bedroom and cleaned up the living room, vacuumed the living room and helped clean up the playroom. I got my office vacuumed and cleaned off my desk. After the girls did some reading, Saturday video games were rewarded.

Thomas has been busy learning quite a bit himself, but since he turns 6 months this coming week, I'll save that for his own update. Happy weekend!

Posted by Katherine at 9:40 AM