Monday through Thursday mornings the four oldest girls had swimming lessons. The first day was a bit hectic making sure each was with the right instructor at the right place at the right time and we were down 2 pairs of goggles. By Wednesday though we had picked up plenty of goggles and even a swim cap for Cecilia. I was really impressed with the progress the girls made. Cecilia and Felicity can now swim backstroke the full length of the pool. They are working on their front crawl. Cecilia can do the side stroke now too. Elizabeth moved up from the pre-school age groups to the school-age groups since she will be turning 6 before the session is over. Teresa was given a time out once for not keeping a hand on the wall but she is improving by leaps and bounds. A year ago she didn't even want to get in the water, now she is totally confident where she can stand and even her instructor was, quite literally, jumping for joy when she used both arms to scoop in her front crawl rather than only one, which she had been doing for 2 months now. She had been using only one because she refuses to let go of you with the other! But my biggest surprise has been Brigid. I have no pictures from the week because I went swimming during their lessons all week and took Brigid with me. She loves the water and is a bit of a little dare devil. She likes to float on her back and absolutely loves to jump in from the side and doesn't care if she goes under when she jumps in. She absolutely loves the bubble jets on the wall too. 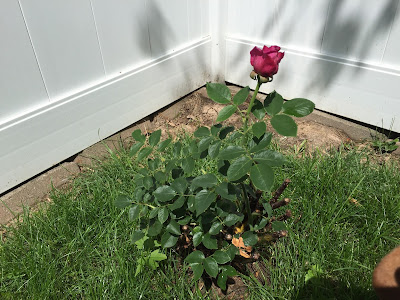 On Monday we did a religion chapter together, this one focusing on Mary. Honestly, most of it was not new to Cecilia or Felicity. We have celebrated many Marian feasts, each of the oldest 3 girls know their patron Saints and each one has a Saint who has a special connection to Mary: Bernadette and Lourdes, Catherine of Laboure and the Miraculous Medal, and Elizabeth and the Visitation. We did go completely through the chapter and color a few Marian pictures, but it didn't take very long. I think the concepts of the new Adam and the new Eve and the Immaculate Conception were the ones we went over the most. I also noticed it has been too long since we said a family Rosary, but I'll deal with that later. Cecilia and Elizabeth also finished their last Spelling lessons for the year. Elizabeth did one page of math, Felicity 3 pages of math and Cecilia 1 lesson of math which focused on adding and subtracting fractions and mixed numbers.

Tuesday all three girls did some math but otherwise we took it pretty easy.

Wednesday Felicity and Elizabeth finished their math for the week and Cecilia did her 3rd math lesson for the week. Cecilia's been getting the hang of creating common denominators for fractions this week and it has been new. Then we did our final religion lesson for the year on the Second Coming, the Particular Judgement and the General Judgement and what our glorified bodies will be like and what indulgences are.
Thursday Cecilia did her final math lesson and we gave the main floor of the house and the upstairs bathroom a decent cleaning. And I spent a fair amount of time Thursday and Friday sewing on all of the AHG badges for all three girls' vests. The only thing I haven't sewn are the numbers on Elizabeth's vest. A local mom is trying to get a troop started closer to us than our current troop and, if it does take off, we would probably join that troop due to the convenience of distance, closer contact with local girls and in case we can help get the troop going. But I've no idea what their number would be yet assuming they can get up and running, so that is on hold.

Posted by Katherine at 1:46 PM