We did so much last week I forgot a couple of things. All three girls memorized the first third of the Anima Christi prayer (in English). And Cecilia was over 300 pages into The Fellowship of the Ring. They had just figured out the password to enter through the elven gate to go into the mountain.
Monday, August 10th, St. Laurence
Cecilia got off to an early start with her Spanish; she has really gotten into that program and enjoys it quite a bit.
Elizabeth did her phonics for the week and then half of her math. She had already completed her greography for this week last week. Cecilia did a math lesson and memorized the second third of the Anima Christi. She had already completed her geography lesson for this week last week as well. Felicity did her vocabulary and 3 pages of math. She also had completed her geography for this week last week as well as her handwriting. Teresa did 1 reading lesson and read "rat" and "see" all by herself.

She does really well with it when she isn't distracted. She did 3 pages in math as well. She counts through 12 perfectly but gets mixed up in the teens so we practiced those and will continue to go over the teens up to 20. I tried to get her to do some handwriting but she insisted she "can't do it" and I didn't push it.
After lunch we pulled out the molds Cecilia and I poured on Sunday and made a 50g potassium aluminum sulfate/100ml distilled water solution with 1/4 blue dye tablet. We set the molds in the solution in the basement to try to grow blue crystals on the dolphin and lightning arrow molds. Here's hoping!

Then we sat down to do religion. We went over the attributes of God and the Blessed Trinity. While we did not know God's name before Moses nor about the Trinity before Jesus, people could have known about God's existence by the amazingly beautiful and intelligent design of creation yet God continues to reveal more about Himself to us so that we might know Him better and love Him better. We talked about the three persons but single divine nature and that God has no beginning and no end. And I gave the girls a little oral quiz about which person does what and where each person entered into Scripture and yet that each person was truly God. It was definitely a good review for all with some new details included. 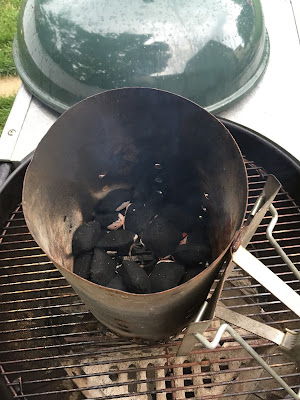 While I got the grill going for dinner, in honor of St. Laurence, Cecilia emptied the entire dishwasher for me and put everything away. Before bed we read about St. Laurence and his amazing martyrdom. 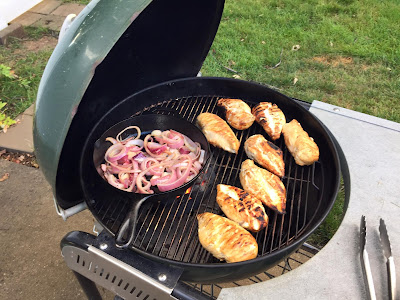 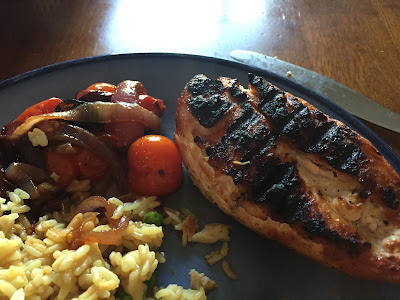 Tuesday, August 11th, St. Philomena, St. Clare, St. Susanna
Bookwork was a bit chaotic today but we did get some things done. Elizabeth did her handwriting and finished her math for the week. Felicity did her spelling but she got quite upset at the idea of having to spell the words without seeing them and I had to call her back to the table but she did quite well once she tried. Cecilia did her vocabulary and then a math lesson.

We checked Cecilia's crystals but decided they needed another day to sit. After lunch we did some history. While Teresa and Brigid played in bubble bath outside bathing their babies, the older three and I read about the Sumerians and the creation of the first empire under Sargon. Then we read "Gilgamesh and King," "The Revenge of Ishtar," and "The Last Quest of Gilgamesh." Then we talked about cave paintings and how people used grass, dirt and other things from nature to make paints and then painted what they knew. And I got out the Crayola finger paints and some brown paper I crinkled up and we made our own cave paintings. Teresa especially got into it and loved covering her hands in paint.
We read over all three Saints for the day.

Wednesday, August 12th, St. Jane Frances de Chantal
I was quite glad we had gotten as much done on Monday and Tuesday as we had. Thomas had woken a few times during the night and one of those times he decided he was simply up for almost an hour. So I was pretty tired. But we did manage to get some work done. Cecilia did her spelling and a math lesson. Felicity worked on some math. Elizabeth did her spelling and half of her english. Then we interrupted the school day so James could take the oldest four to see Shaun the Sheep. I stayed home with Thomas and Brigid. After they had lunch, I read Brigid some stories and then did a few chores. When the older girls got home, Elizabeth finished her english and Felicity worked on some math but she became very discouraged when I had to inform her she had done a couple dozen problems incorrectly. Simply, she had begun subtraction problems from the left and did not realize she needed to borrow. So she took a break.
For dinner, I gathered the oldest three and had them cook dinner. They boiled the water for the pasta and put in the butter and cream for the sauce and then grated all the parmesan cheese. They helped stir the pasta and see if it was al dente and then season it with white pepper, nutmeg and salt and then got out the spoons and helped serve their dinner. Pasta alfredo, or as my kids call it, cheesy pasta, but it was a wonderful, simple start to our cooking class and I think they all relished a dish they all like more knowing they had made it.
Thursday, August 13th
After another poor night, the morning got off to a slow start but I gave Thomas his first full haircut.
Before: 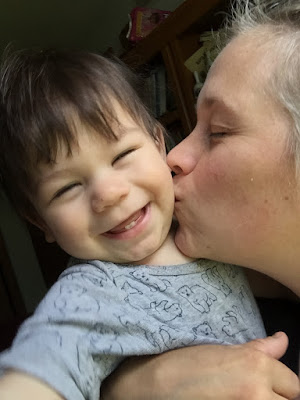 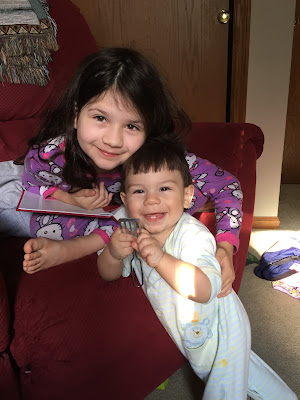 Felicity did do her english before I took the oldest four for their dental cleanings. 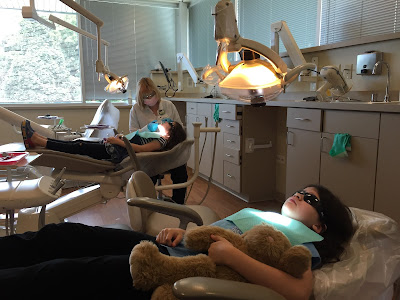 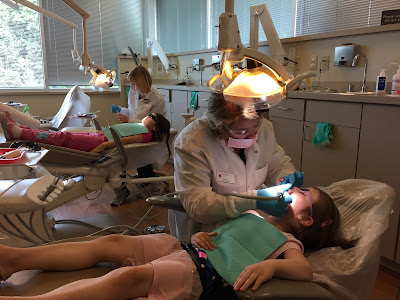 All four girls passed with no cavities and after we got home we did latin. Elizabeth really didn't pay attention at all. Honestly I think she might just be a bit too young. Since we accidentally did 4 lessons last week, we went back over lessons 2, 3 and 4 and did the workbook pages for them together. Cecilia really got it and enjoyed it. Felicity struggled a bit more but got it and seemed to enjoy getting it. Then I did poetry with Felicity and Elizabeth, both of whom struggled a bit more with the Anima Christi prayer but got close enough to call it a day.

Friday, August 14th, St. Maximilian Kolbe
We took a drive, albiet a bit of a lengthy drive, to the only Church approved Marian apparition shrine in the United State. 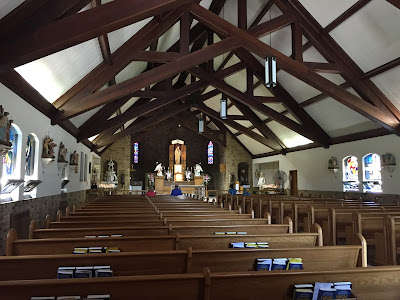 This is the Shrine of Our Lady of Good Hope. Adele Brise was born in Belgium in 1831 and immigrated to Wisconsin with her parents in 1855. In early October, 1859, Adele saw a woman clothed in dazzling white standing between an hemlock tree and a maple tree. The woman was surrounded by a bright light and wearing a yellow sash around her waist with a crown of stars above her blond hair. Adele was frightened and prayed until it disappeared. When she told her parents, they thought it might be a poor soul in need of prayers.
The following Sunday, October 9, 1859, while walking to Mass, Adele saw her again and while her sister and another woman were with her at the time, neither of them saw anything. Adele asked her parish priest for advice and he told her, if it happened again, to say, "In the Name of God, who are you and what do you wish of me?"
Returning from Mass the same day she saw the woman for a 3rd time and said what her priest told her to say. The lady replied, "I am the Queen of Heaven, who prays for the conversion of sinners, and I wish you to do the same." She also told Adele to "gather the children in this wild country and teach them what they should know for salvation."
Adele was 28 years old and devoted the rest of her life to teaching children, at first by traveling from house to house on foot and later in a small school. Other women joined her and they formed a community of sisters according to the Third Order Franciscans even though Adele never took public vows as a religious. She died on July 5, 1896.
On the way there and back, we listened to 4 chapters of E. B. White's The Trumpet of the Swan, my first favorite book.

Saturday, August 15th, The Assumption
On Thursday I checked over Felicity's math and, apparently, in the few weeks we had off from school she forgot a bit about borrowing when doing subtraction and four of her math pages looked like it had the chicken pox with wrong answers. Needless to say she was understandably discouraged. So, in small spurts over 2 days, I helped her work through all the corrections. I don't grade my kids because they are so young, but I do check over their work and insist they correct their mistakes. On Saturday morning she finished the last of the corrections and then did her final 3 pages of math.

And Cecilia finished The Fellowship of the Ring and began The Two Towers.

Just for fun, and because they are so little for so small a time, a few Thomas smiles:

Posted by Katherine at 5:40 PM