I admit I didn't take notes of this week as it happened, so I'm going to have to wing the whole week from memory.

The week started off with the most fantastic nights sleep in over a year. Not a single child woke me all night: 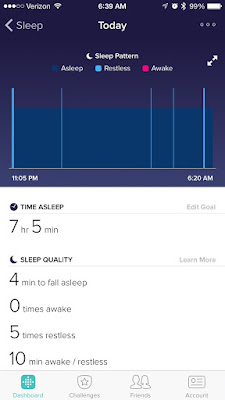 Unfortunately that was the only night of good sleep. Thomas' incisors began breaking through and Brigid got a touch of virus.

It was a really hot week, which means I had difficulty keeping the kids outside for very long. So there was a lot of blocks, puzzles, etc. 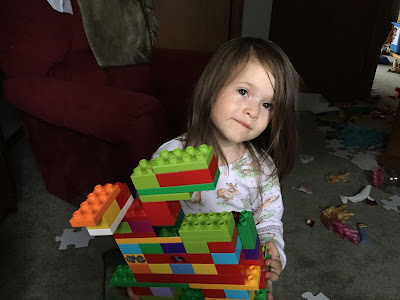 Felicity worked on composing her own song. I missed recording her first verse, but this was her comments on her song:

Brigid's godmother crocheted Teresa a Minion hat. We've been joking that the minions are "her people" and she absolutely loved it.


If you'd like her to make you one, you can find her at Sweet Stitches Crochet on Facebook.

When they did get outside, it was either to swing on the swings early in the morning or just before bedtime or to play in the water table. Brigid and Teresa love to take baby dolls outside and give them baths. So this was not an uncommon sight: 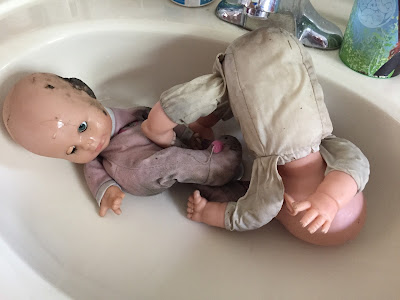 We also finally pulled Cecilia's remaining crystal experiments to see how they finished up. They weren't bad. This is her geode: 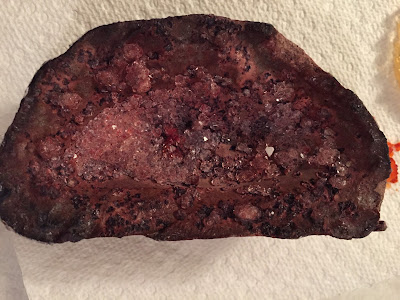 And these were her form shapes, with a few little crystals that formed in the bowls: 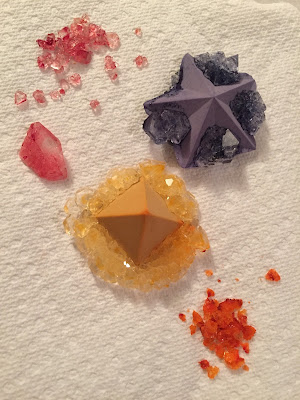 It is a shame the crystals didn't form over the whole shape. Honestly I just don't think it was porous enough. But the crystals that did form were fairly impressive. 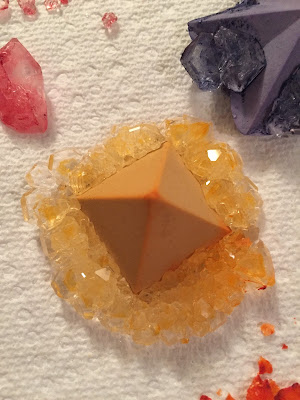 If we did it again, I could see skipping the instructions and picking a color and doing multiple rounds on one shape to really try to build up the crystals over the whole thing. I think that might be really quite beautiful. 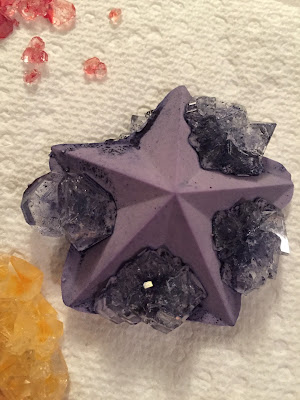 The girls got done almost all of their school work. The only assignments we still had for our Catch-Up week were Cecilia's poetry, sewing and the Virtues in Practice. In Music we listened to music as it might have sounded in ancient Babylon and blew on empty Coke bottles to hear the sound. We talked about the four basic types of instruments and how they could have been made very simply from things found in nature by early peoples. And then, for fun, we watched Disney's Toot Whistle Plunk and Boom:

In religion we talked about the hierarchy of creation and the unique role humanity plays. We talked about what it means to be created in the image and likeness of God, what the relationship between humanity and God would have been like before the Fall and why human beings have an intrinsic dignity simply because they are human beings. We considered how important this was in the subjects of abortion and euthanasia. What started as a fairly simple lesson progressed into some heavy material with some difficult recent related subjects but it was a very fruitful discussion.

In Latin we did a review of the first 8 lessons. In History we read "Ox, House, Stick: The History of Our Alphabet" which went through the origins of each letter of our alphabet from the sumerians, to the Greeks to the Romans and how many of the letters began meaning a word. For example, the letter A originally was rounded and upside down to depict the head of an ox. It was quite a fun and fascinating book. We also looked through "A Journey Through Time: Excavating Life on Earth." 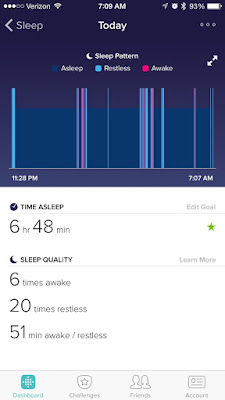 I had to start giving Thomas some Infants Ibuprofen.
But on Thursday we drove out to Green Meadows Petting Farm for an outing. It was hot but blissfully empty as most kids returned to school earlier in the week and there wasn't a cloud in the sky. 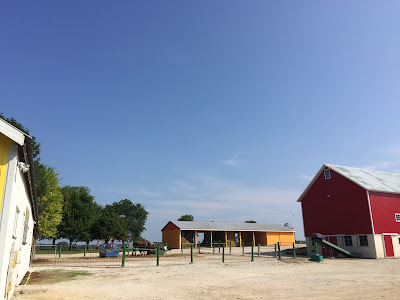 The farm has just about every farm animal you can imagine from the standard pigs, cows, goats, sheep and chickens to the less common potbelly pigs, texas longhorns, guinneas, turkeys, etc. They also have numerous playgrounds and various play areas. This one was of corn in a feeding trough. 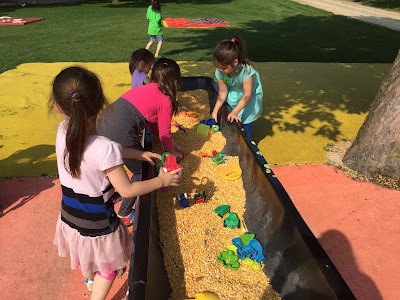 The girls' favorite play station was this water pump with rubber ducks and pipe slides: 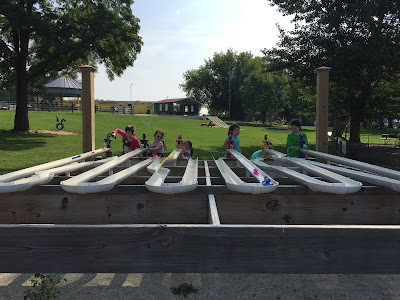 Brigid especially loved it. She did need a little help when her numerous ducks would get stuck at the end from lack of water, but just a pump or two of help and she was back in business. Teresa tried to take every pink duck there was.

I LOVE Brigid's face in this one. And it was a sweet treat to get all the girls in one shot.

IMG 7293 from Katherine S on Vimeo.
From sandboxes to ride on toys to swings and slides to climbing equipment, they really had just about every form of play equipment there is. 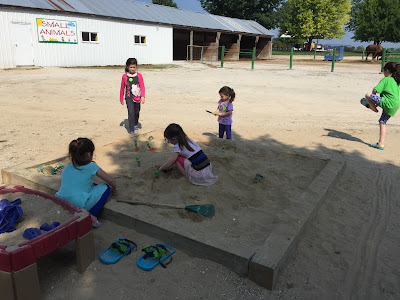 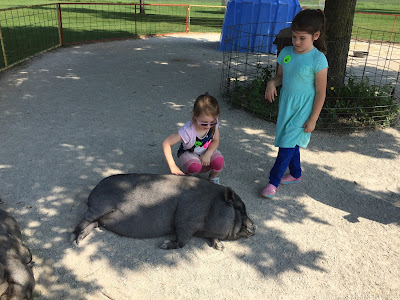 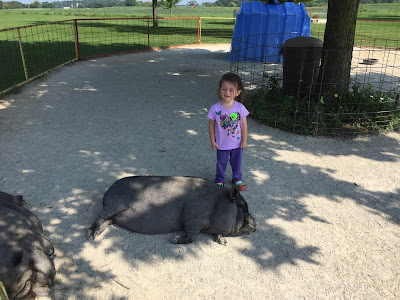 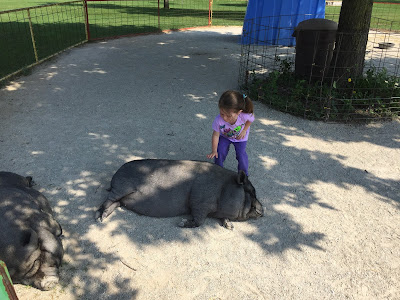 There was a cart of all sorts of objects and wooden sticks for the kids to make their own music.


Cecilia and I milked a real cow. The others were a bit hesitant but we did actually manage to get some milk out, although I admit I had a harder time of it than Cecilia did. And the oldest four even took pony rides 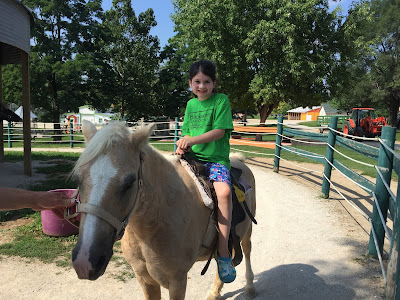 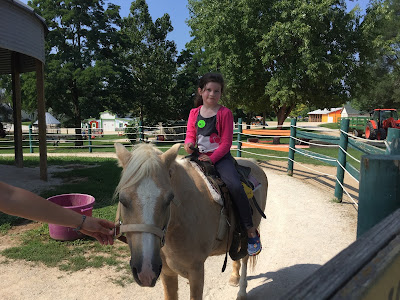 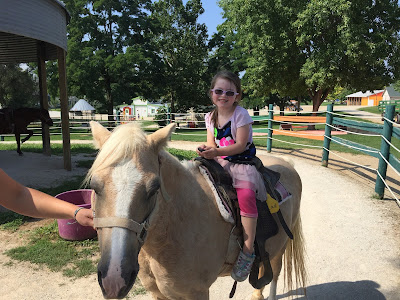 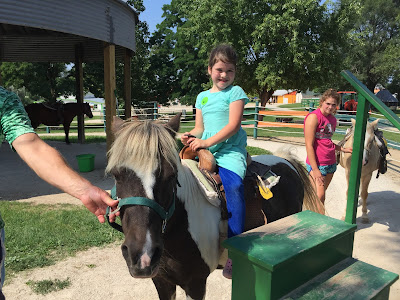 I did try to get Brigid on and would have walked beside her but she was scared and didn't want to. In fairness, I can't imagine how even a small pony like this looks to a petite 2 year old. 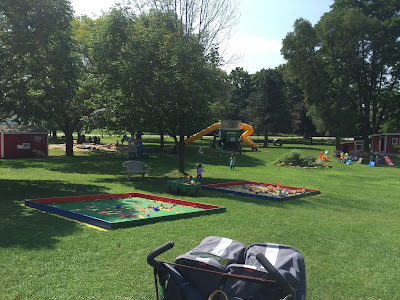 Before we left they got a few minutes to run around and play at the various play stations. Not surprisingly several gravitated back to the rubber duck water slides.

The week culminated in a visit from Grandpa. Basically the kids spent almost 3 solid days playing game after game after game with Grandpa. He taught them adult (as in not the kids) version of Monopoly and we played Michigan Rummy. They played Disney Haunted Mansion Clue, squirt guns, bike riding, video games... you name it.

In the meantime I rearranged and cleaned the playroom. I absolutely love this half of it now: 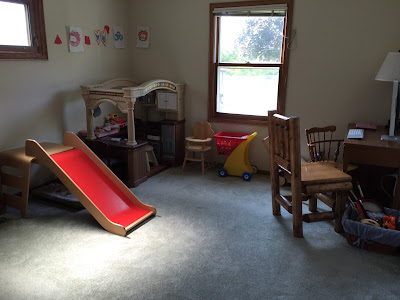 It is this half I'm still not happy with. I still have more to do on this part. So I try to see only the other half for now. :) 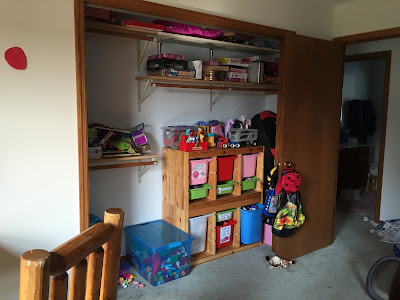 I hope everyone has a wonderful Labor Day!
Posted by Katherine at 10:56 AM