Of course, the first half of January was spent on our Florida trip, so school started back up for us a week later than I would usually have done.

I have to admit, our first week back was rough. I mean I knew coming back from a long break and Christmas and a Disney vacation would be a bit of an uphill climb but adding in a cold/fever/congestion/vomit thing made it even harder.

Basically, we spent our first week back just trying to get the bookwork done and keep ahead of the illness. We even had one night when we came scarily close to taking Elizabeth to the ER when her fever hit 105. I'd never had a child with a fever so high but, thank God, within an hour the ibuprofen had taken it down to 102.7, so no such trip was necessary. So yeah, our first week back was just trying to get the minimum done and get healthy, so we finished it a bit behind and with a few of us still sick. We did manage to get one chapter in religion done though, focusing on Jesus' hidden life!

So, I really wanted to try to make the second week count. We trudged through the bookwork and did another chapter in religion, going over Jesus' baptism and the preaching of the Kingdom of God. We also went over a bit about the virtue of gratitude. On Tuesday we began our new unit on ancient Greece by going over a bit about the geography of Greece, what they wore and how it wasn't a country yet but separate, and often warring city states. We listed some of the contributions Greece gave to the world, such as philosophy, democracy, theater, astronomy, etc. We then began reading D'Aulaire's Greek Myths. On Wednesday I spent 3 hours rearranging my living room and then my eat-in part of my kitchen, so we didn't get done quite as much as I hoped, but it had been driving me crazy and now we can do school on our full, expanded table and all of us can sit at it to eat together! 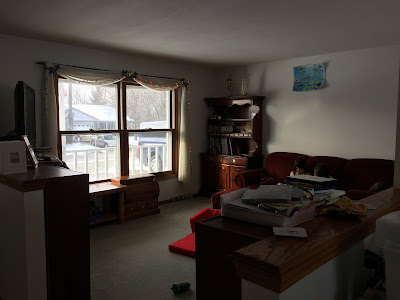 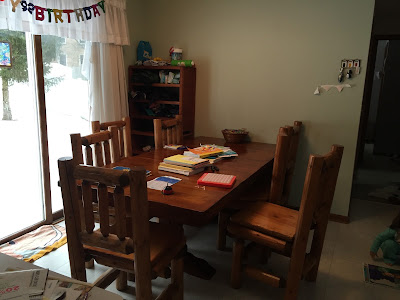 We did still manage to do some science though! We read Dr. Seuss' There's No Place Like Space and then used the Memoria Press Astronomy book to learn about the Sun, Mercury and Venus. We did two of their workbook pages as well which went over terms like revolution, rotation, axis, orbit, asteroid, solar, etc. Considering there is still a fair amount of coughing and congestion going around and we lost Thursday morning to a double wellness doctor appointment for Brigid and Cecilia, we got a fair amount of work done. Hopefully things will get better, easier and pick up in February.
Posted by Katherine at 3:56 PM