In the Spring of 2008, I began reading the Bible from Genesis. In November 2016, I finished the Old Testament. After 8 and a half years reading the Old Testament, reading "The Gospel According to Matthew" has never sounded so good. But I didn't want to rush through it. I wanted to really take my time and savor the Gospel of Matthew, which St. Dominic carried with him always and knew by heart. So I thought it might be fun to blog the Gospel of Matthew throughout the year. 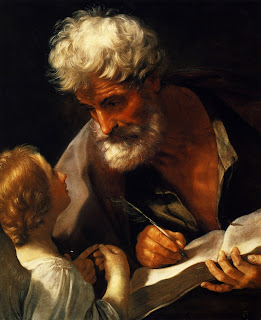 The first 17 verses of Matthew's first chapter are of the genealogy of Jesus from Abraham and God's first promise and covenant, through Jesse and the great King David, through the Babylonian exile down to Joseph, the husband of Mary. Matthew is writing his Gospel to the Jews and so it was especially important to demonstrate to them that Jesus fulfilled the prophecy that the Messiah would be a descendant of Abraham and of King David. While Jesus is not the biological son of Joseph, under the law, Jesus' descent would have been reckoned by his father, not his mother since it was through the father that one conferred the rights of his inheritance. Joseph was the legal and presumed father of Jesus and as his son, under the law, was counted among the lineage of David and Abraham.

Interesting as all this is, what struck me was how quickly Matthew summed up what took me 8 1/2 years to read and how important the Old Testament is for the New Testament. Without the promise of a Savior, it is hard to make any sense out of Jesus. For Jesus to fulfill a prophecy, there had to be a prophecy and there had to be waiting for the fulfillment of that prophecy. Jesus does not come in a vacuum but within the story of salvation history. He is not an arbitrary savior but a savior that is promised because we needed Him. Without those 17 verses, Jesus doesn't make much sense. Without Genesis, there is no fall for which we need a Savior. Without Noah there is no rainbow of the promise of God's providence. Without Abraham there is no promise of God claiming humanity as His own. Without David there was no promise of a Divine King.

God took centuries to prepare people for the coming Savior. He took great care and patience to prepare humanity to receive His own Son. The Old Testament is the frame within which fits God's masterpiece and we should remember the context within which God chose to send our Savior because the Old Testament foreshadows the New and the New explains and fulfills the Old.

Jesus comes not in isolation but among a people and from a lineage. He comes to a people with heritage and history, custom and law. He comes not as an outsider but to belong and to be one with us as one of our own. He comes from generations and among families.

The last 8 verses of the first chapter concern the birth of Jesus. Matthew points out that Mary was betrothed to Joseph but she was not yet living with him when she became pregnant "with child of the Holy Spirit." In his first chapter, Matthew proclaims Jesus both man and God, both the child of Mary and yet conceived by the Holy Spirit. Matthew doesn't wait to set the scene or ease us into the story but tells us very quickly just how amazing this story is because it is about the God-Man, the Divine Son of Mary.

Many men who would find out their fiancé was pregnant with a child not their own would not keep their commitment to them, yet Joseph does not want to expose her because he is "a just man." Joseph is not offended, does not take it personally and believe himself wronged but is concerned for Mary and the possible ramifications of the situation. While he is praying, an angel appears to him a dream and addresses him, "Joseph, son of David," and instructs him to not fear to take Mary for his wife and that her child is the divine Son who "you will call his name Jesus" and He will save people from their sins. The angel addresses him as a "son of David" to point out that it is through Joseph that Mary's baby will fulfill the prophecy and requirement of being the promised Messiah descended from King David. And, to fulfill this prophecy, Joseph must be Mary's divine child's legal father and the angel honors this by telling Joseph not that the baby's name is Jesus but that Joseph shall call his name Jesus. It was the role of the father to name the child and the angel respects God's law that Joseph is the one who will name Him and, being a just man, Joseph will name the savior what God asks him to be named. God does not force His will on Joseph but rather comforts him to not be afraid, explains that the child is the awaited Messiah and then asks Joseph to cooperate with His will by accepting Mary as his wife, naming His Son Jesus, and accepting the child as his own.

Matthew interjects to point out that it was in this way that the prophecy of Isaiah is fulfilled that a virgin would conceive and bear a son and his name would be called Emmanuel, which means "God with us." Matthew, addressing the Jews, begins his Gospel by focusing on Jesus as the fulfillment of the prophecies and being a faithful Jew, these things would not have been lost on Joseph either.

Joseph wakes from his dream and did as the angel said and took Mary for his wife but, Matthew makes a point of saying,  did not exercise the rights of a husband to consummate his marriage but rather "knew her not" and named her son Jesus. Matthew makes this point I think for two reasons. One is the remove any doubt that Joseph did not have had any role in the conception of Jesus. And secondly because it means that Joseph thoroughly believed the angel, reverencing Mary as the mother of the Divine Savior and naming her son Jesus.

Jesus is the foretold Messiah, conceived in a virgin by the Holy Spirit and born into the lineage of Abraham and King David.
Posted by Katherine at 9:59 AM

Email ThisBlogThis!Share to TwitterShare to FacebookShare to Pinterest
Labels: Gospel of Matthew