Chapter 2 begins with the visit of the Magi who arrive asking where the newborn king of the Jews can be found. Upon hearing this Herod and all of Jerusalem becomes troubled. I was a bit perplexed why Jerusalem would be troubled. Herod being troubled makes sense. He is the cruel tyrannical puppet of the Roman empire who exploits his own people and the very idea of a new Judaic king is a threat to his position. But why is all of Jerusalem troubled? Maybe the priests and scribes and pharisees were troubled over another probable false prophet or any change to the establishment, but the rest of Jerusalem? 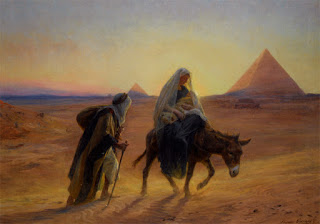 Then I got to December 28th, the Feast of the Holy Innocents, and I wondered if all of Jerusalem was troubles not because of the newborn King, but because they didn't know how Herod would react. Could Jerusalem have been troubled because people were afraid of their own ruler? Given how Herod reacted, it certainly would have been justified. The Magi though, wise men though they were, did not know Herod and must not have realized his attempt to use them, but God protects them in their innocence and warns them not to return to Herod. They were wise in the ways of God, but not in the ways of the world and it was because of this that they knew to look for the newborn King. Herod wasn't looking.
And when the Magi find the newborn king, "they rejoiced exceedingly with great joy." They aren't even Jewish, but they know that this child is special and a great reason to rejoice. Why rejoice over the birth of a king who isn't even your own? Because they were wise in the ways of God and knew that even the Heavens were celebrating the birth of this child. They knew that this king would change the world and was blessed by God.
The Magi give Him gold, in honor of his kingship, frankincense, because He is sent by God and thus will offer prayers and be a holy priest to God, and myrrh, an expensive and rare anointing oil of the East foreshadowing his self-sacrifice. Personally I find the gold easily understandable and the frankincense reasonable, but the myrrh always baffles me a bit. How did they know he would suffer? Maybe it was because no one who had ever served God lived an easy and luxurious life. To be wise in the ways of God is to reject the ways of the world and when you do that the world doesn't like it. This child, who has just been born, has been born to suffer and die in the service of God.
And this becomes evident immediately when Joseph, Mary and Jesus must flee for Egypt because Herod wants to kill the newborn king and in his determination to make sure the newborn king is wiped out, Herod kills every boy in Bethlehem and its surrounding areas who were two years old or younger. The joyous celebration of Christ's birth is short lived and followed by exile and infanticide. It makes it particularly appropriate that the Liturgical celebration of Christmas is followed by a week with three feast days of martyrs: St. Stephen, St. Thomas Beckett and The Holy Innocents. We can't have Christmas without remembering the cross. Jesus birth is joyous but it is not without purpose and we can never forget that purpose.
Posted by Katherine at 3:57 PM

Email ThisBlogThis!Share to TwitterShare to FacebookShare to Pinterest
Labels: Gospel of Matthew