I posted my Learning Notes for December before Teresa's zoo class, so it gets it's own post!
In September Brigid had her zoo class on bears, in October Cecilia, Felicity and Elizabeth had their classes on mountain dwelling animals, but Teresa had to wait until December for her class, but I think it was worth it. 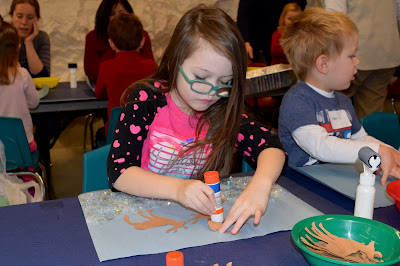 She began by making a placemat of reindeer walking through the glittery snow. 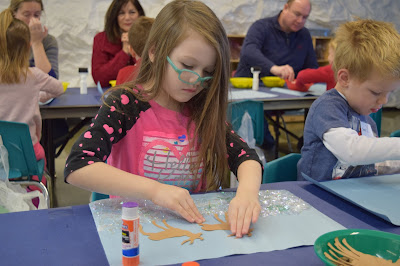 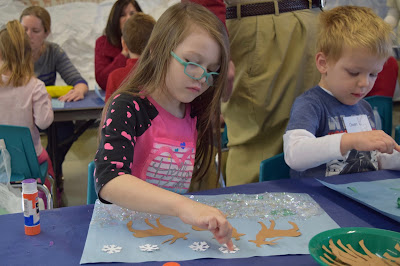 Then we made a bag of reindeer food to throw outside at home for our local woodland creatures, colored a book with information about reindeer and colored a reindeer puppet with a mountain backdrop headband. 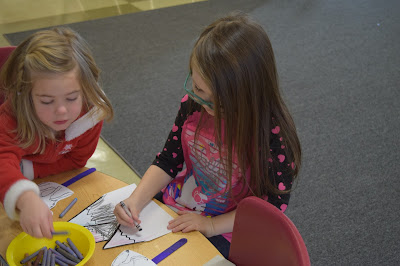 She made reindeer antlers and hooves and got a rudolf nose. 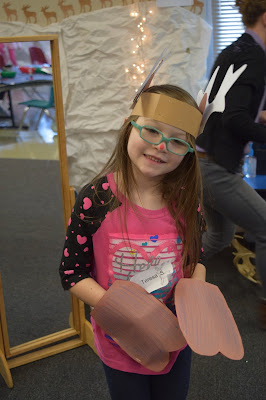 She felt real reindeer fur, a 5 foot real male reindeer antler, and a smaller antler with velvet still on it. 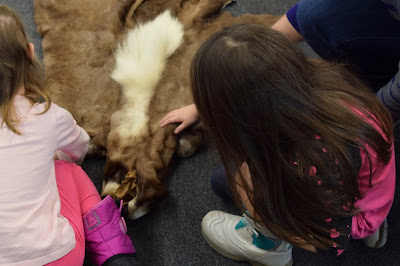 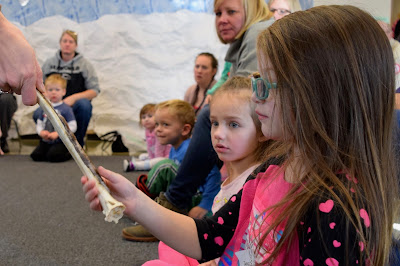 She got a reindeer snack of a "stick" (pretzel) with "lichen" (green frosting) on it. 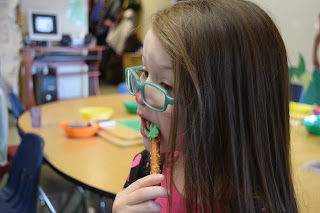 But her favorite activity by far was a few plastic deer and leaves in Insta-Snow. She buried the plastic leaves and pretended the deer dug them out, sometimes the deer got buried head first, she lined them up in their herd and had one deer collect the food for the others, sometimes they got hiccups... she could have played with that for hours. 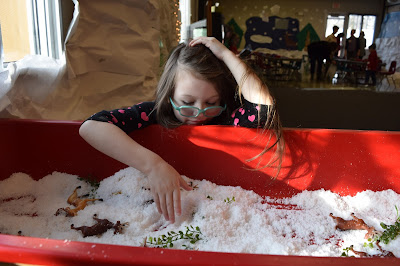 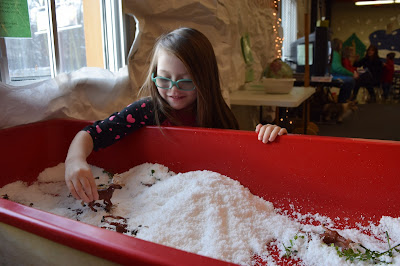 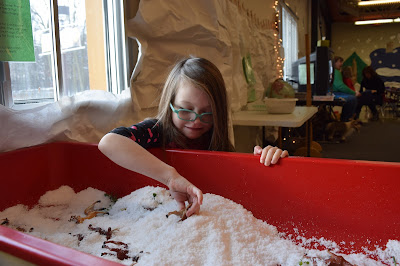 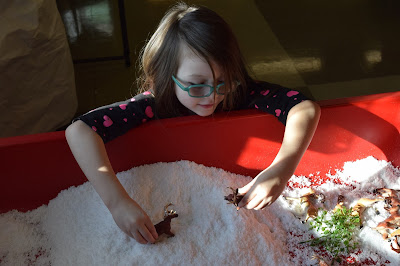 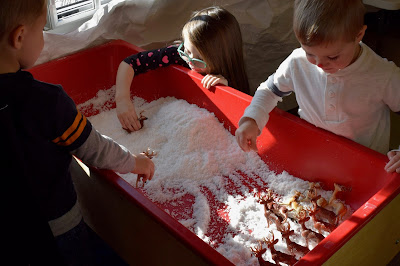 Then we bundled up warmly because when the wind blew it felt like -1 degrees and walked completely across the zoo. I had to laugh at the geese who were sitting on the ice of the pond. 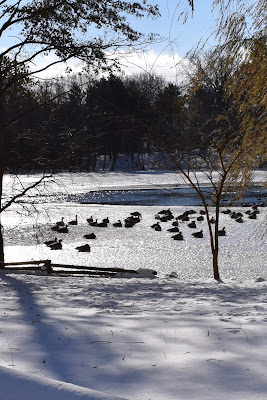 And we walked to the reindeer exhibit. We got to see their three reindeer. This one is the mom. 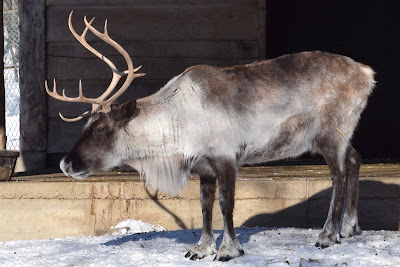 This is her son (notice that while both males and females have antlers, the males are bigger, and both shed their antlers but the males shed them in mid December and the females shed them a few months later). 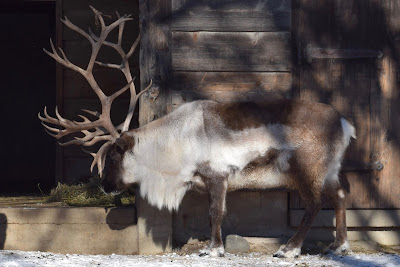 And this is the grandma, Rosie, the smallest of the three. 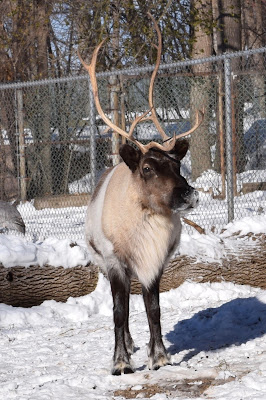 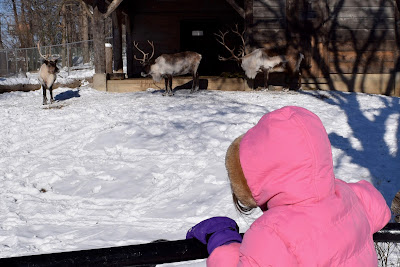 As we walked around the exhibit towards the zookeeper's entrance, we were met with some visitors. Teresa got so excited. 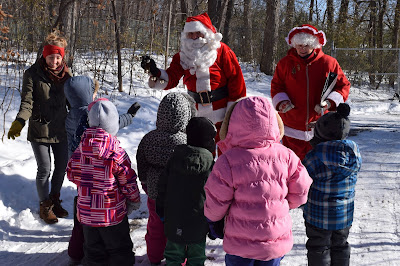 It was so cold though, Santa and Mrs. Claus invited us into the zookeeper's shed to stay warm and get a treat. So the kids got super close to the reindeer. There is no glass there... they were almost, quite literally, nose to nose with the reindeer. 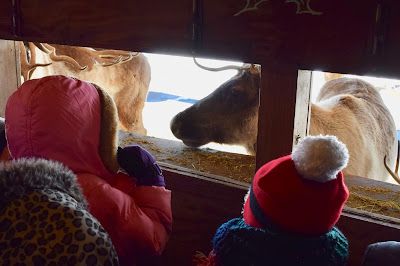 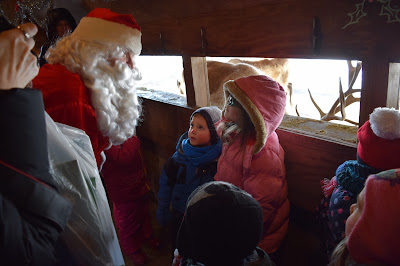 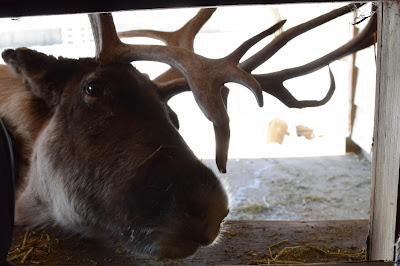 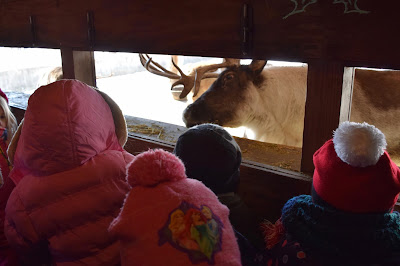 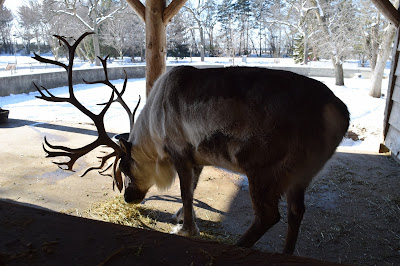 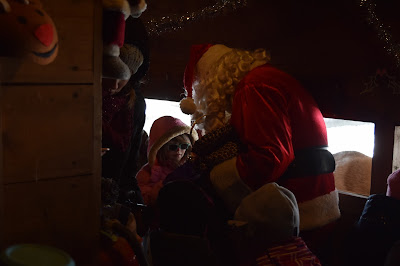 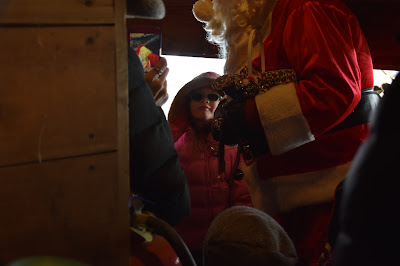 Teresa still will not say she had fun but I had to pry her fingers off the education building door because she didn't want to leave and she came home announcing to her sisters that she saw "the real Santa," so I'm pretty sure she had a good time. 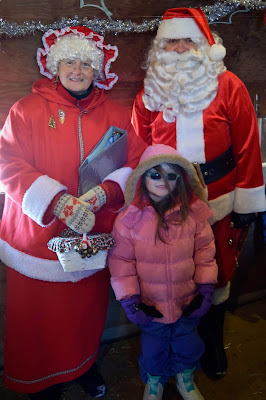 Posted by Katherine at 3:28 PM