The following post includes a few details pertaining to a miscarriage. Please don't read further if it will disturb you.

On January 10th, I came down with the flu.

On January 17th, I found out I was pregnant.
On January 18th, I tested positive for Strep.
On January 22nd?, 25th and 28th, I had 3 increasingly severe gall bladder attacks.
On January 29th, I began a very low/non fat diet.
On January 30th, an ultrasound confirmed gallstones and the need to remove my gallbladder but not until the 2nd trimester.
February 3rd I met with the surgeon and the surgery was scheduled for March 28th because it is safest to do surgery during the second trimester.
February 14th, I was up for 2 hours with abdominal pain.
February 15th, I saw the OB and had an upsetting appointment with a rough exam.
February 18th, I was in abdominal pain and spotting but was told it was normal and from the exam, which was easy to believe given how rough she had been. I won't be going back to her. 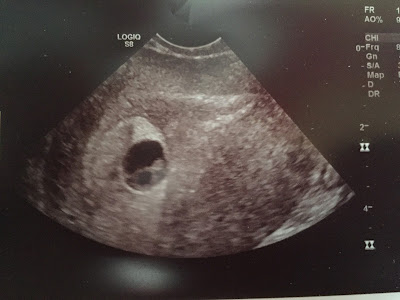 February 21st, I had a sonogram which showed that my baby, which should have been about 9 weeks, 5 days, was only measuring 5 weeks, 6 days. There was no no heartbeat, only a fetal pole about 3mm long. Blood tests on February 22nd and 24th confirmed the miscarriage.
February 23rd, I woke up with a sore throat and began spotting.
February 24th, I couldn't breathe through my nose and woke up with a 2nd degree burn on my calf from a heating pad. And the bleeding began. 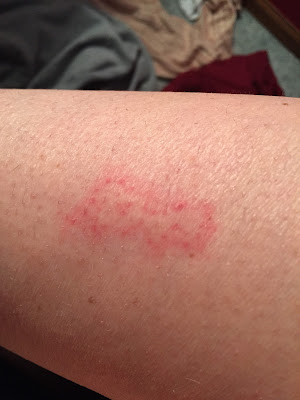 February 26th was the most difficult day physically, but it was February 28th when I held my baby in the palm of my hand.
I bled for total of 17 1/2 days.
I cried just about every day for 2 weeks. And it is funny the things that can send me crying. I shared what happened on Facebook and the support and prayers were wonderful. But it is also amazing how every baby or pregnancy post, article, update or picture can hurt. I had one Facebook friend who was 9 months pregnant and complained in a status update that she was still pregnant. I wanted to hit her. I mean, I get it - I've been ready to get that baby out at 9 months, but it stung. And I'm sure it will go on stinging for a good while yet. Some days are getting better. Some are harder. It is a wound that can never completely heal and I don't always see it coming when something jabs at it.

I read Karen Edmisten's After Miscarriage. There were two things that struck me the most.
The first was a poem by a friend of mine. Melanie Bettinelli of The Wine Dark Sea wrote a beautiful poem after her miscarriage:

Little SparrowNo one scorns the haiku for being shorter than War and Peace
Nor scolds the daffodil for being briefer than a redwood
But this little life cut off so young
We mourn and cry “too soon too soon”.

Surely the Author knows when to end each tale

And yet
Jesus wept

So should we all
For in the beginning death was not

And though there is a plan perhaps for even this little sparrow’s fall
Still we cry
For we know that a sparrow was meant to fly.

No mother was ever meant to lose their child to miscarriage. God never intended a world with miscarriage. It is only because of our fallen world that miscarriage is possible. Miscarriage, like all death, flies against everything God wanted for his children. God hates miscarriage even more than those who have experienced it can. And we will always look around and pine for the child who should have been with us because, deep inside, there is a part of us that knows, in a world without sin, without suffering and death, we would always be together. Our comfort is that God has made a way that we can yet be together again one day.

The second was something Karen said when she conceived after having 5 miscarriages and was scared she might lose this new life as well:

What if I have this baby for only a very short time, and I allow that time to be consumed by fear rather than love? How terrible would it be - for me and for this baby - if I lose it without ever having said, "I love you"?

We can't know if we will have any more children, but if we do, I hope I can remember this.

When I was cramping on Valentine's Day and the fear that I might be miscarrying occurred to me, I began praying and I suddenly remembered a name I had always liked. I prayed for our baby's salvation in case I was miscarrying. Once it was confirmed, I shared the name with James and the kids and it was universally approved. So we named him Christopher Anselm. I bought a picture frame and added the sonogram picture to the ones of all our other children at their first birthday on my bureau and my mom bought me a Christmas stocking for him so his can hang with all of ours next Advent. 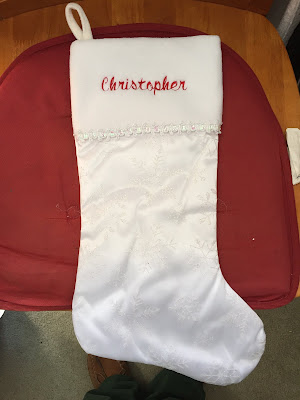 Most of the stockings are red with white trim and Thomas' is green and red. Christopher's will be the only white one but since he is already in Heaven, it will represent him well. We have also added St. Christopher and St. Anselm to our family Litany of the Saints at bedtime.

There simply is no way around a miscarriage. You must go through it. There is no way to undo it and no way a child can be replaced. We will always be missing one this side of Heaven and I will always wonder what our family might have been like if he had been able to stay, but when we do get there, I will still and always be his mother and I will look forward to meeting him and until then we have a saint praying for us and I can take comfort in the fact I have gotten 1 of my children to Heaven, with 6 more to go. :)

St. Christopher Anselm, Pray for us.

Posted by Katherine at 5:40 PM