Overall our second week went well. Teresa and I went over the Holy Trinity and that there is only one God but three Persons and who each of them are. The oldest three girls and I read the second chapter of Matthew and went over the birth of Christ and the prophecies referenced and the flight to Egypt and its parallel to Israel and the similarities between Moses and Jesus. We also began reading Catherine Beebe's Saint Dominic and the Rosary. We even squeezed in some time with some modeling clay. 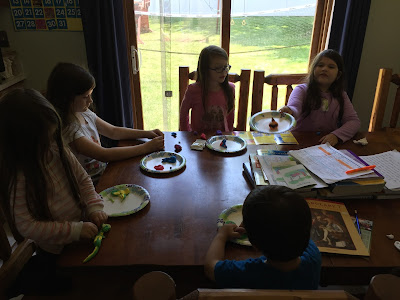 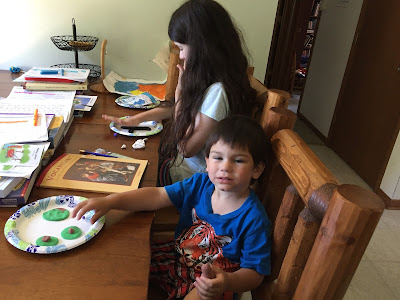 On Tuesday we read David Macaulay's Cathedral and then watched the PBS version "Cathedral." We also looked at the various cathedrals in the DK Architecture book. The girls also took turns practicing cutting to help make salsa for dinner. We also all prayed a rosary to celebrate the feast of St. Dominic together.

Wednesday we read a chapter in 12 Bright Trumpets about a juggler saving a serf from a cruel baron during Medieval times. We also finished lesson 1 in Zoology focusing on extinct species and endangered species and then the girls tried to do a little nature scavenger hunt.
Thursday we spent enjoying the company of friends for a playdate.

By Friday we had finished Saint Dominic and the Rosary and played Multiplication Bingo. We went to a local display of The Compassion Experience, which sets up small rooms like those of children growing up in 3rd world countries and narrates you through their stories. I thought it would be good for the kids to see what it might be like growing up in other countries and with less than they have. It was free and the oldest three really enjoyed it. We learned about Olive from Uganda, Carlos from Guatemala and Kiwi from the Philippines. Then we had dinner at Pizza Hut and went to our Little Flowers meeting to complete the requirements for their badge for the 100th Anniversary of Fatima.

At 4am Saturday morning, Cecilia, Felicity, and I got up to see the Perseid Meteor shower. It wasn't easy with how much light there was, but we did manage to see several "shooting stars."

Brigid has been loving school. She is over halfway through her second math book practicing writing her numbers and counting the teen numbers. She has also completed 11 reading lessons and is practicing the sounds the letters make as well as writing both capital and lower case letters.
Posted by Katherine at 10:30 AM