By week 15 we were all ready for Thanksgiving break but we had one week worth of work to go. So we got busy. On Monday we the three oldest and I read through the 12th chapter of Matthew and Teresa and I did lesson 13 on the Baptism of Jesus, the picking of the 12 disciples and the beginning of the preaching of the Kingdom. We also began reading the chapter on Christopher Columbus in Columbus & Cortez, Conquerors for Christ by Eidsmoe.
On Tuesday we continued our history reading and read First Voyage to America: From the Log of the "Santa Maria" by Christopher Columbus.
Wednesday was crazy busy. We began the day with a playdate followed by adoration and a trip to the library.
Thursday we finished our chapter on Columbus and did our Zoology lesson on beetles, lady"bugs", flies and other bugs.

Thomas has been sick and waking up early coughing, so by the end of the week I pretty much felt like he acted at Mass the previous Sunday: 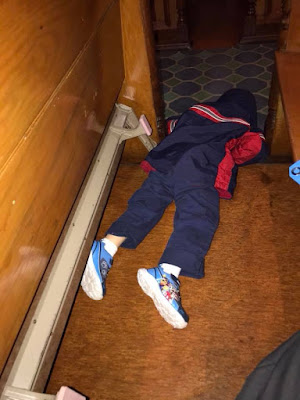 Posted by Katherine at 9:45 AM